A proposal to remove a bus stop on the 21-Hayes Muni line has sparked controversy and strong reactions from residents of the NoPa neighborhood and the owners of one local businesses. Now, after months of signature collections and public meetings, it appears the bus stop is staying put.

The SFMTA had proposed the removal of two bus stops along the 21 route in an attempt to streamline and speed up the bus's travels through the neighborhood. The 21 currently stops on every block for the four blocks between Baker and Masonic on both the inbound and outbound routes.

The SFMTA began reviewing the speed of buses in relation to the number of stops each route had back in 2009. Streetsblog reported at the time that 70 percent of bus stops were deemed "too close." According to SFMTA's guidelines, streets with grades less than 10 percent should have a bus stop every 900-1400 feet. For streets with a grade higher than 10 percent, bus stops may be as close as 500 feet.

In the outbound direction, the 21 has two bus stops on the block of Hayes between Baker and Lyon streets. The stop on Hayes and Lyon is slated for removal.

In the inbound direction, the 21 has two bus stops on the block of Hayes Street between Masonic and Central. One of these stops—located at the southwest corner Central and Hayes Streets—is the one that some neighbors, as well as nearby business Central Coffee, rallied to retain. 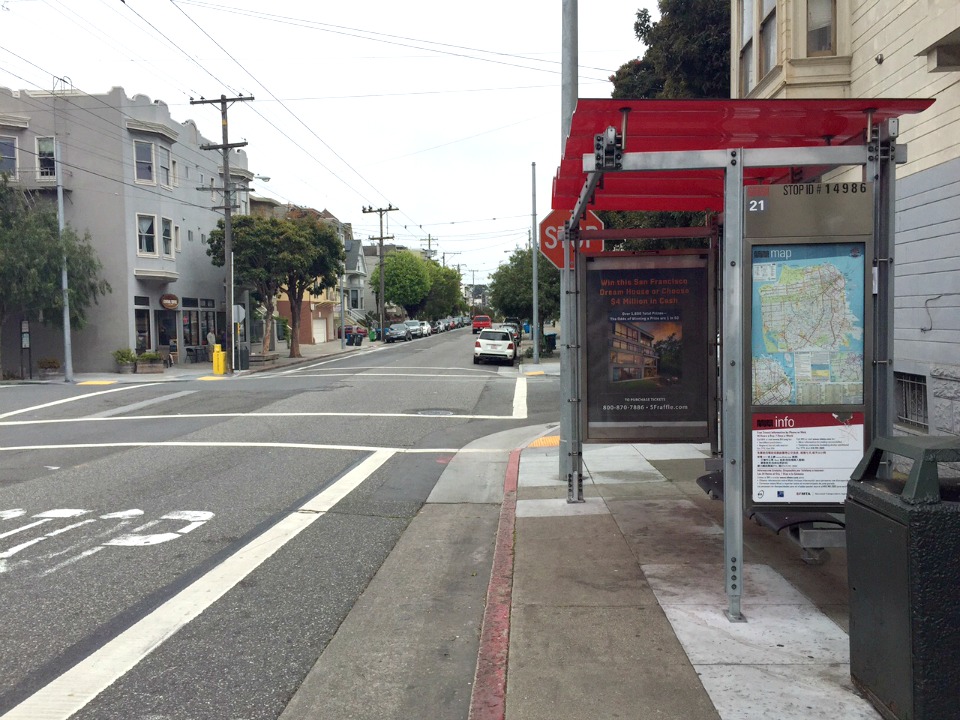 The controversial bus stop, with Central Coffee in the background. (Photo: Nuala Sawyer/Hoodline)

Ali Ghorabi of Central Coffee claims that the bus stop provides his business much-needed foot traffic in the mornings, and that removing it would negatively affect both the neighborhood and his coffee shop. When the SFMTA replaced Muni shelters with a new design in 2010, the bus stop at Central and Hayes was left temporarily without one. Ali says that with nothing but a red curb to signify that it was a bus stop, passengers began shifting to other stops and Central Coffee's business suffered as a result.

But the bus stop is not just a business-generator—Ali claims it's also a neighborhood necessity. He told us that since Central Coffee opened in 1995, he's seen many of his customers get older. Some have young children; others are now elderly and use oxygen tanks or canes. In a largely residential neighborhood, having access to the bus for all of the neighbors is an important issue, he says. "This is really a neighborhood line. It doesn't cater to a commercial corridor as much as other bus routes."

Ali also referenced one neighbor's argument that removing the bus stop wouldn't actually save any time. "When you have people getting on a bus and getting off a bus, the total load is going to be the same," he points out. "It's going to take just as long for passengers to get on the bus upstream or downstream. Everyone thinks that the bus won't have to stop, but it will, as there's a stop sign at that intersection. So the time that you're really saving is the opening and closing of the doors."

During the hour that we chatted with Ali outside Central Coffee, at least one person was waiting for every inbound 21-Hayes bus at that the inbound Hayes and Central stop. One was a mother with a baby strapped to her chest, another an old woman with a cane. A person in a wheelchair got off the bus at that stop, as did an older man using a hiking stick for stability.

Not everyone is a fan of retaining the stop, with the comments on our original article showing opinions divided on the issue. SFCitizen has called the notion "absurd," and noted in outrage that flyers asking to "Help us save the 21 Hayes Muni line" were mailed to nearby residents. Ali says it was members of the neighborhood who created and mailed the flyers out. "I was involved in the flyers, but we (Central Coffee) don't have the resources to mail those out," said Ali. "There was a group of people involved."  Similarly, Ali claims no knowledge of a post on PandaHi for "cash bonuses" in exchange for signature collections.

In the end, Central Coffee and neighbors concerned with bus stop accessibility trumped proponents of the bus stop's removal. With over 1,000 signatures collected, a big push of emails and the support of London Breed's office, the SFMTA has dropped the proposal to remove the bus stop. For now at least, the bus stop will stay put.

The SFMTA Board will vote tomorrow on the removal of just one of the 21-Hayes bus stops: the outbound stop on the northeast corner of Lyon and Hayes streets. But this time, unless nearby Parkside Market steps up to the plate, the stop is unlikely to remain, as the SFMTA seeks to streamline bus service and increase transit efficiency citywide.

San FranciscoNoPa
About 3 hours ago