The former home of a cartoonist, sculptor and inventor Reuben (Rube) Lucius Garrett Goldberg at Gough and Oak streets has won a victory, as yesterday the Board of Supervisors unanimously voted to designate the building as a historic landmark.

The R. L. Goldberg building has been the source of controversy for months, as building owner Kenneth Hirsch began Ellis Act eviction proceedings against the tenants in 2013. Hirsch has owned the building, which he told us he purchased as a retirement investment, since 1996. 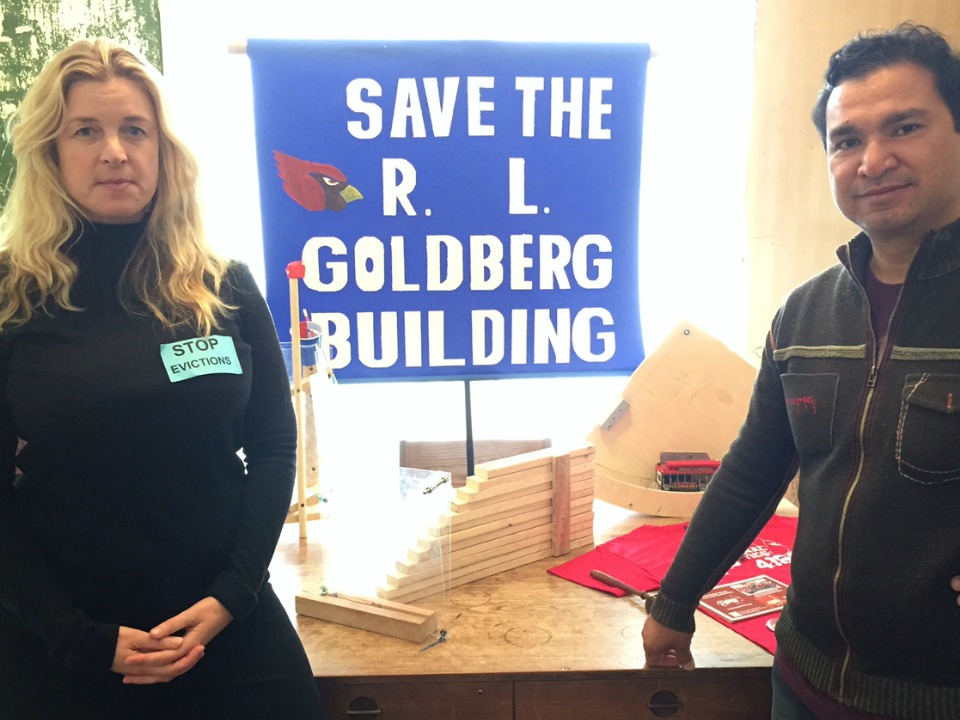 The building houses four residential tenants. Jacqui Naylor and husband Art Khu are musicians who have lived in the building for 25 years. Their neighbors include Beverly Uptown (Executive Director of the Domestic Violence Consortium) and her husband Dave Hill (SF Public Library employee), who have occupied the second unit for almost as long. Both units are rent-controlled, and the group have been actively fighting eviction, as well as working to preserve the building's historical characteristics.

Before Naylor moved in to her apartment, it was occupied by a woman who lived there for 43 years, and the space had undergone almost no renovations during that time. In love with the layers of wallpaper and glue residue, as well as the original wood paneling and floorboards, Naylor resolved not to paint or make surface improvements to the space.

Instead, the apartment has aged gracefully. The wallpaper that has peeled away has left abstract glue stains, and writing on the walls from workers from decades before. Even the old toilet is original to the building (and yes, it still works). 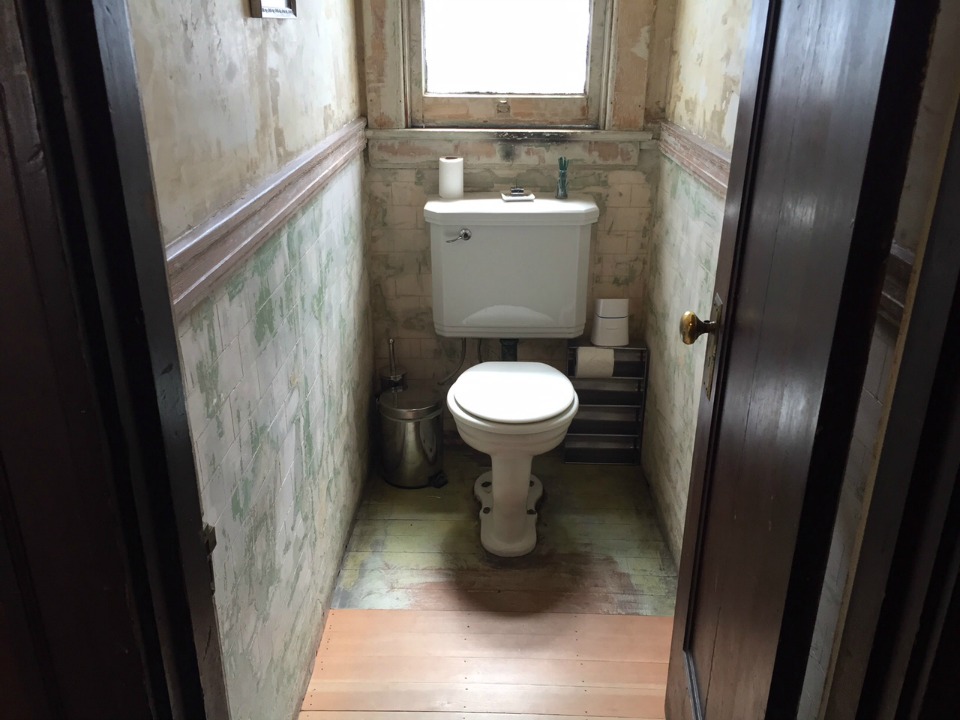 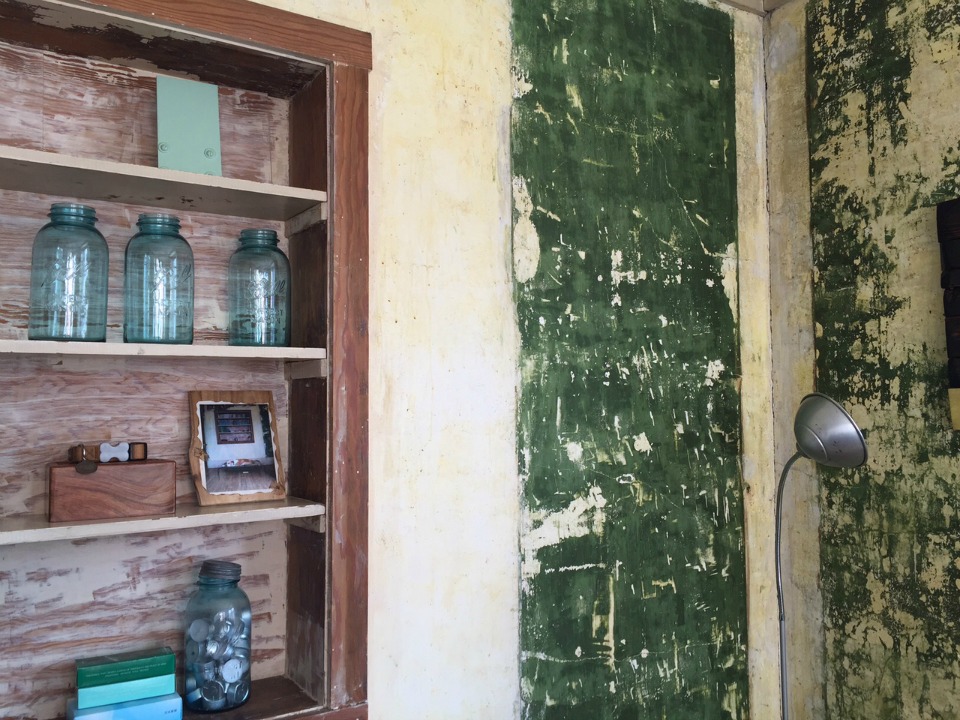 Glue from layers of wallpaper still adorns the walls. 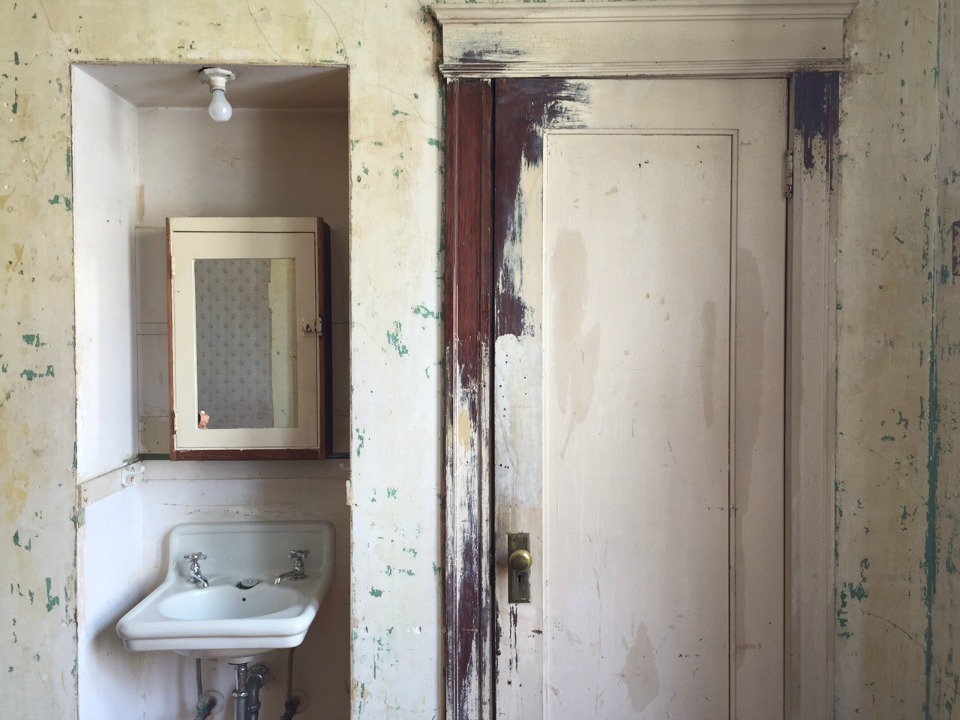 Original fixtures are still in place.

Though some might guess that the historical landmarking of the building could foil eviction proceedings, that's not the case. Evictions can still take place in a historic building. What the landmarking does do is prohibit the building's owner from knocking the building down, altering the exterior, or raising the height. In this case, the interior is not protected.

In fact, the new landmarking may not change much of owner Hirsch's plans overall. As he told us in November, "They (the tenants) wanted their units to be declared historic, probably to stifle my ability to remodel them, but the Planning commission told them that they had no authority to do that but may declare the façade of the building to be architecturally significant. I don’t really have a problem with that as I have no plans to change the exterior. I think it is very attractive."

Naylor reiterated what she told us in November. "It doesn't do anything to protect us. We just feel like we love this building and we want to make sure nothing happens to it, even if we are forced to leave."

So, the future is still uncertain for the building's tenants. When we talked to Naylor at her home this afternoon, she reiterated what many have said in the struggle to avoid eviction. "It's more than just a building, it's a home and our workspace." And regardless of the owner's intentions, she believes that "evicting artists, musicians, non-profit leaders and librarians is not in the spirit of Rube Goldberg."

In a strange coincidence, Rube Goldberg's granddaughter Jennifer George was in town from New York for Maker Faire when the landmark decision was made. We sat down with her at 20th Century Cafe, on the ground floor of the Rube Goldberg building, to learn a little more about her grandfather's home.

"My memories of my grandfather are always through a child's lens," she tells. us. "He used to tell me one story over and over about how he and his brother were in the 1906 earthquake, and how their bed on wheels would roll from one side of the room to the other. And he would always end the story with the building of his home after the earthquake, with his name on top of it with stores on the bottom, and that's the Rube Goldberg home we're in today."

Jennifer is leading a presentation on her grandfather's work at Maker Faire this weekend. If you're attending, swing by the Center Stage at 11am on Saturday to learn more about Rube, his inventions, and his history in San Francisco.

As for what the future holds for the tenants of the Rube Goldberg building, they could be "forced out in a year, or five months, or hopefully never," says Naylor.

San FranciscoHayes Valley
About 11 hours ago