The Rise And Fall Of The Newton J. Tharp Commercial School

Ever wondered what's up with the large fenced-in brick building at the corner of Fell and Franklin? The history of the building is a fascinating and quintessentially San Francisco story.

The Commercial School started life in 1883 as a small high school for boys, located at Powell Street near Clay Street. In 1900, the school also began to accept girls, which was considered progressive for the time. That same year, it moved to Market and Fifth streets, where it remained until the building was destroyed in the earthquake and fire of 1906.

In the wake of the disaster, Newton J. Tharp was appointed City Architect, charged with designing and rebuilding the city’s municipal buildings, including firehouses, courthouses, and public schools. Tharp and his architectural firm had distinguished themselves with the design of the Dewey Monument in Union Square. They were also responsible for the Grant Building, the Sloane Building, and the Hall of Justice, among other notable structures.

On May 11, 1908, a bond issue was voted in, providing $262,872.37 to build a new home for the Commercial School. The next year, Grove Street between Polk and Larkin streets was chosen as the site for the three-story, steel-framed structure, made of brick and terracotta.

Sadly, Tharp would never see the school’s completion: while visiting New York to research plans for a hospital for the poor, he contracted pneumonia and died at age 42. In his honor, the Commercial School was renamed as the Newton J. Tharp Commercial School.

The new school had been in operation for just a few years when plans for Civic Center Plaza were announced. Grove Street was chosen as the focal point of the plaza, which meant the Commercial School would have to go.

In exchange for the Grove Street location, the Board of Supervisors offered its library site at Fell and Franklin as the new destination for the school, and the Board of Education agreed to the exchange.

On February 15th, 1913, the firm of Sound Construction and Engineering of Seattle was awarded a $117,000 contract to move the 8,000-ton building across five blocks to its current home. As a condition of the contract, the company agreed to rebuild the school from the ground up if the structure should fall apart in the move.

Subcontractors Nicholas & Handley Co. were paid $90,000 to complete the journey. Moving an average of 25 feet a day, the building blocked Van Ness Avenue for 20 days, and interrupted the Hayes Street trolley for another 20. Lawsuits were filed against the contractors, but nonetheless, the building was safely delivered. On May 1st, 1914, the Newton J. Tharp Commercial School was installed at 170 Fell St., where it has remained for 101 years.

The next big change for the school came in 1926, when the Board of Education approved a plan to build two additions to the Fell Street campus, the Commerce High School (135 Van Ness) and the Nourse Auditorium (275 Hayes St.) 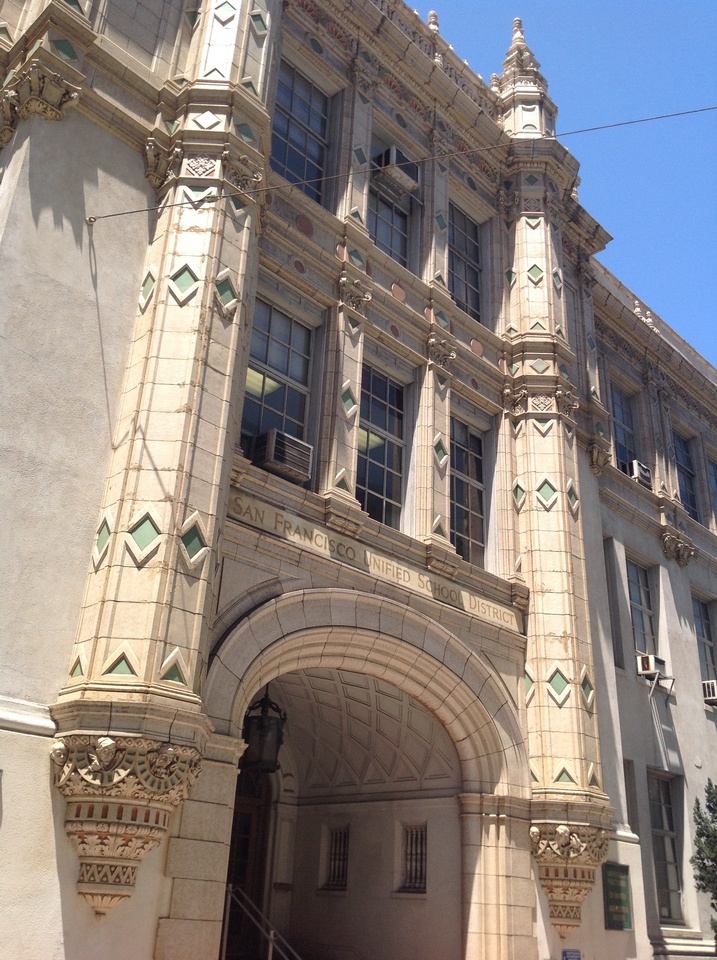 The Commercial High School continued to educate generations of kids, and welcomed a diverse student body, as this photo from 1947 shows: 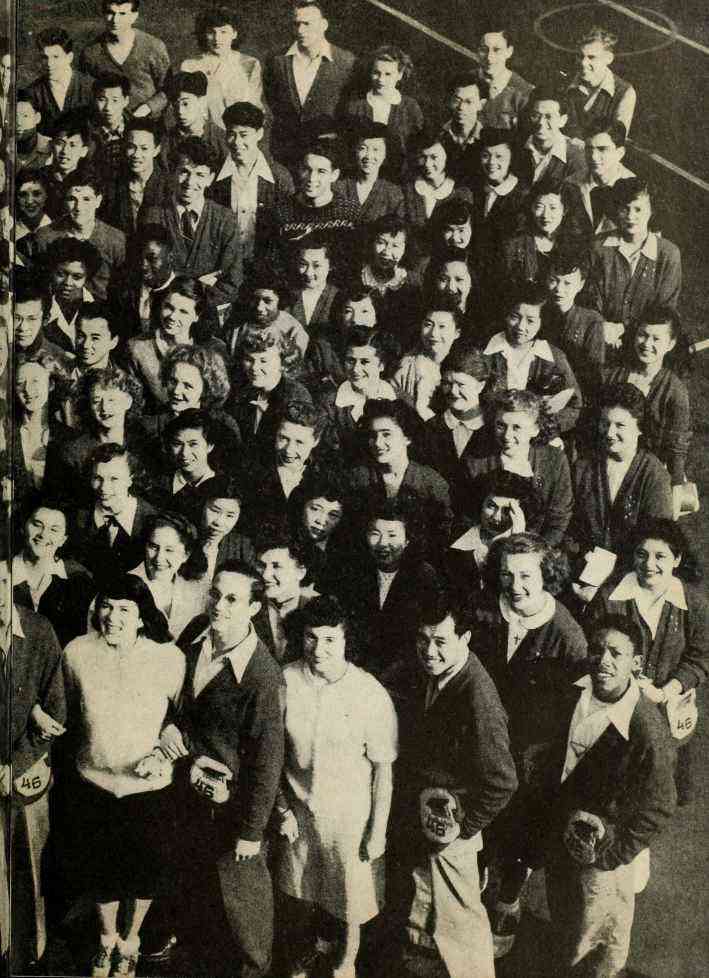 As more schools opened across the city, the Commercial School's enrollment dwindled. By 1952, the Board of Education decided to close the buildings at 170 Fell and 135 Van Ness to students, reassigning them to schools across the city. The buildings became offices for the Board of Education’s administrative staff, while the Nourse Auditorium remained in use until the late 1960s, when it fell out of favor as a performance venue. 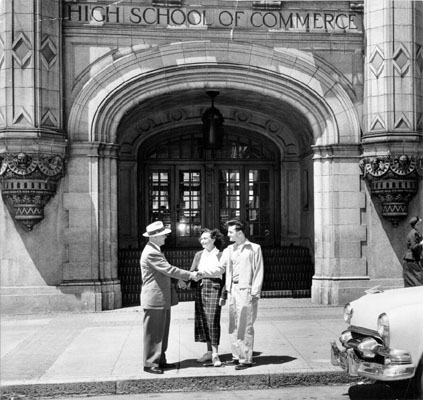 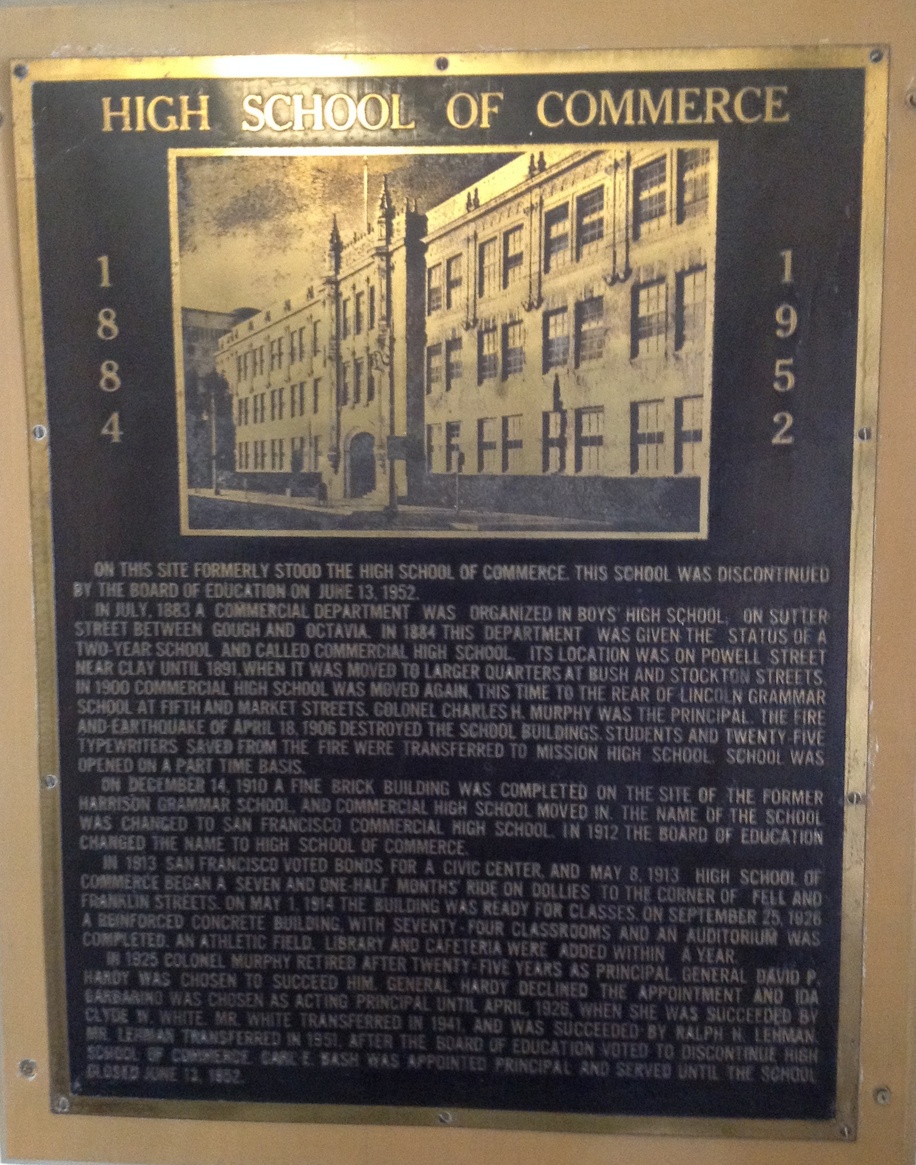 A plaque located inside 135 Van Ness that pays tribute to the high school, including its move and closure. (Photo: Reginald McDonald/Hoodline) 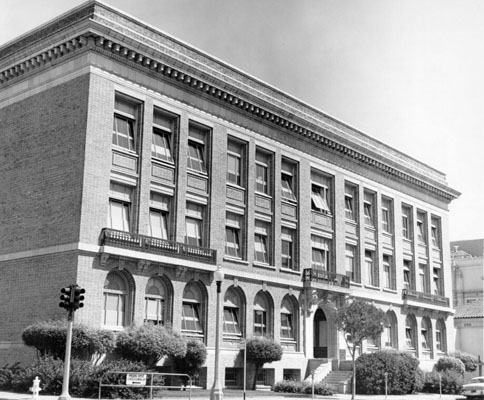 In 1981, the Newton J. Tharp Commercial School, the Nourse Auditorium, and the School of Commerce were collectively designated as San Francisco City Landmark #140. But the 1989 Loma Prieta earthquake caused damage to all three buildings, with the Tharp building at 170 Fell sustaining the worst of it, and subsequently red-tagged by the city. In the aftermath of the earthquake, the San Francisco Unified School District decided to move its offices out of both buildings. (The Nourse Auditorium was unoccupied at the time.) FEMA funding covered debris removal and emergency protective measures for both buildings, as well as repairs to the damage sustained at 135 Van Ness.

However, FEMA funds were not approved for the Tharp building, due to disagreements about the scope of the repairs. FEMA rules require that if the cost to renovate a building exceeds 50 percent of the cost of replacing it, the building should be replaced. But since the Tharp building could technically be repaired, the State Historic Preservation Office refused to let it be destroyed. The building also needed extensive upgrades that FEMA wouldn't fund.

In 1995, the San Francisco Unified School District agreed to allow the Ruth Asawa San Francisco School of the Arts (SOTA) to take up residence in the 135 Van Ness building, though the move never went through. That same year, the SFUSD officially notified the State Office of Emergency Services of their intent to demolish 170 Fell St. Mayor Willie Brown was in favor of the decision, saying that “historic preservationists should not stop [the move].”

Before the building could be demolished, the San Francisco Landmarks Preservation Advisory Board stepped into the breach, invoking section 106 of the National Historic Preservation Act of 1966. The act requires all federal agencies involved with the repair, demolition or restoration of historic buildings to follow a review process before any steps can be taken to alter or demolish a landmarked building.

The subsequent review found the Newton J. Tharp Commercial School had historical significance, and had not sustained enough damage to warrant its demolition. The decision was made to mothball the building, protecting it from any further action until adequate funding could be secured for the building’s restoration. 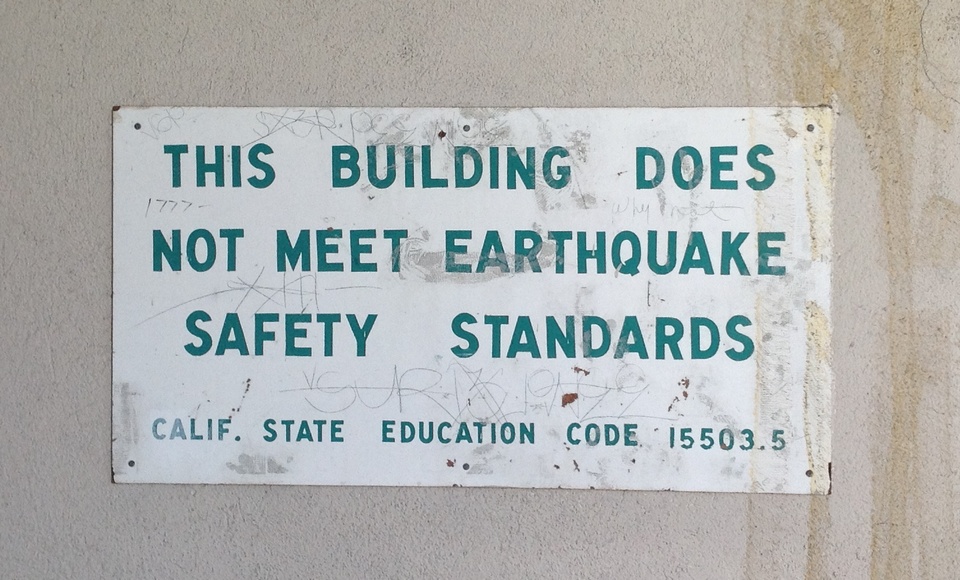 In August of 2001, the Tharp School briefly sprang to life as the subject of a two-day protest by the housing activist group Homes Not Jails. Protesters hung colorful banners from the windows and called for long-abandoned buildings to be used as housing for the homeless and poor. On the second day of the protest, the police raided the building, arresting nine members of the group. 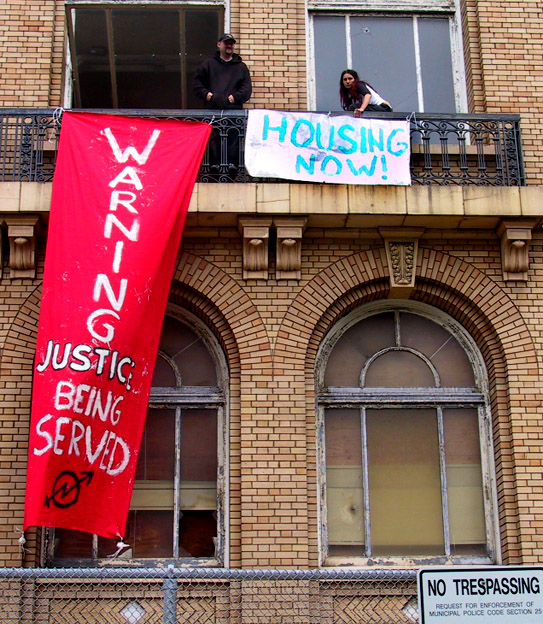 On April 30th, 2013, Nourse Auditorium reopened after a one million dollar renovation.  The slightly renamed Nourse Theater, home to City Arts and Lectures, is under a multi-year lease arrangement with the School District. Meanwhile, the High School Commerce building at 135 Van Ness still houses some of SFUSD’s administrative staff, while 170 Fell St. remains mothballed.

In 2014, a renewed effort to move the Ruth Asawa San Francisco School of the Arts to 135 Van Ness began again, with San Francisco Jazz Center architect Mark Cavagnero at the design helm. The move and renovations are estimated to cost $240 million.

In February of last year, SFUSD spokesperson Heidi Anderson told the San Francisco Business Times that with “the possibility of new funding opportunities and partnerships created by today’s economic climate — the project is moving forward.”

Even with this new burst of energy, Cavagnero’s design for the School of the Arts does not include any plans for the Newton J. Tharp Commercial School. When asked about the 170 Fell St. location, Cavagnero stated that “the school district could lease it out for a use that would not require a seismic upgrade.” 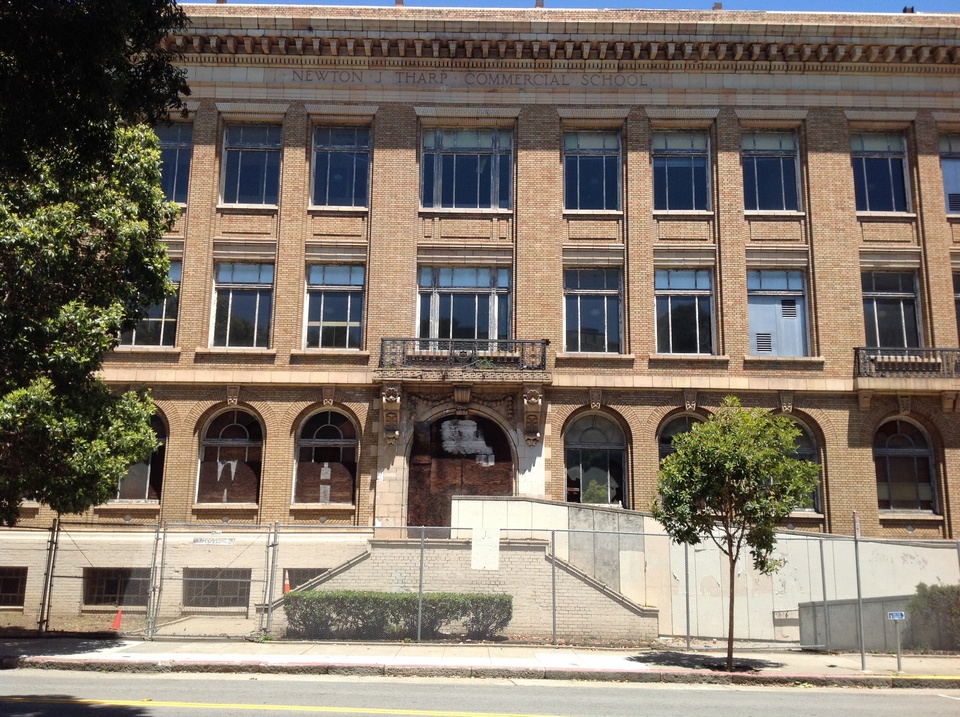 And so, having survived fire, two earthquakes, a dramatic relocation, and benign neglect, this historic landmark remains a ghost of the past, without a clear path to the future.