Thanks to a $4.25 million community benefit grant from the forthcoming California Pacific Medical Center, the Public Utilities Commission is moving forward with its plan to upgrade street lights in the Tenderloin. The new lights are intended to improve pedestrian safety and beautify the neighborhood.

Based on feedback collected over eight community meetings this spring, as well as years of planning and community outreach, the PUC will install 100 decorative street lights across at least 25 blocks in the neighborhood. Each new pole will be 22 feet tall and consist of two teardrop-shaped light fixtures, matching the ones seen at Golden Gate and Taylor streets (below). One light will illuminate the sidewalk, while the other will focus on the street. 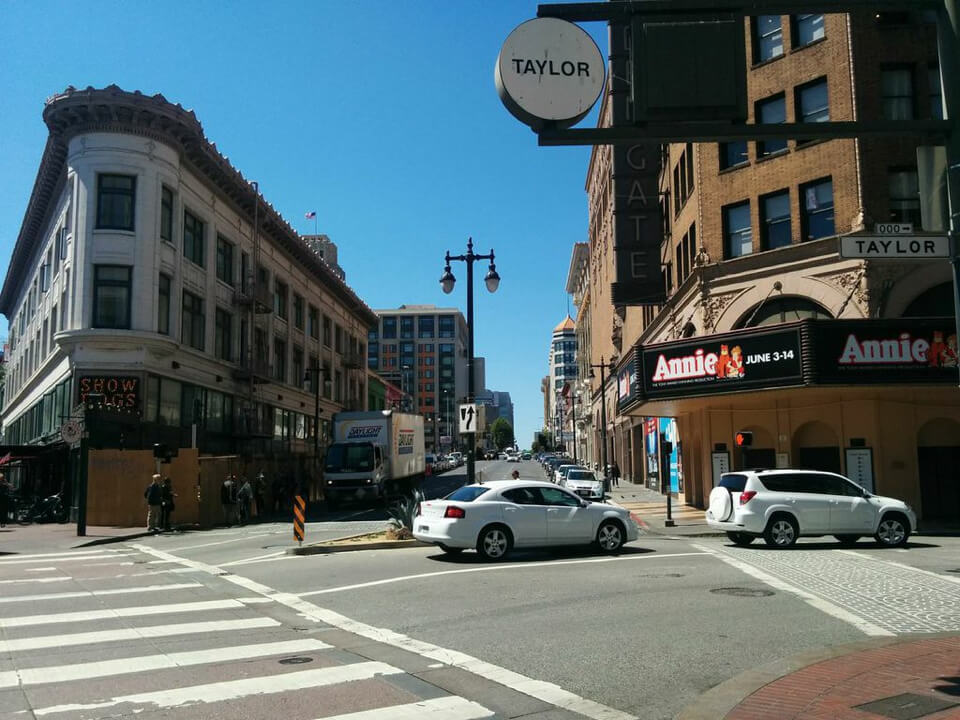 "Of the two options we presented [this spring], there was clearly much more support for adding in the new twin teardrop decorative poles into the Tenderloin area," said Charles Sheehan, communications manager with PUC.

In terms of placement, four new decorative poles will be installed on the north/south blocks of Larkin, Hyde, Leavenworth and Jones Streets, and six will be placed on each block of Eddy Street. Sheehan added that Larkin from O’Farrell to Geary and Charles J. Brenham Place from Market to McAllister will also receive four decorative poles, if funds allow. The project is set for completion by August 2016.

"These blocks were selected to create cohesive street lighting framework for Phase 1 investment that distributes lights evenly throughout the neighborhood," Sheehan said. "In addition, new lights are concentrated on the north/south blocks, to mitigate blocks that have the most challenging lighting conditions."

While $4.25 million still isn't enough to cover the entire neighborhood, there's a good chance the project will be extended beyond its current scope. The Board of Supervisors has taken notice of the neighborhood's overwhelming interest in the new decorative poles, voting in June to approve funds for designing a second phase of the project. Sheeran said the next steps will consist of analyzing the area's existing electrical infrastructure and planning exactly where additional decorative poles should be installed. 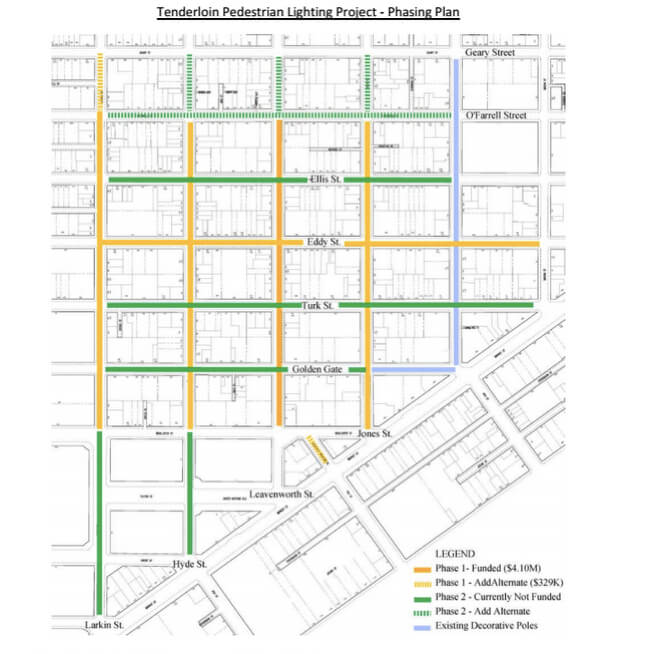 The latest plan for upgrading street lights across the neighborhood.  (Image: PUC)

The new poles aren't the only lighting project benefiting the neighborhood over the next year. All of the cobra-head light fixtures in the Tenderloin that aren't replaced with decorative poles in phase one will be upgraded to LED lights as part of PUC's citywide LED Street Light Conversion Project. That $16 million project is also slated for completion in August 2016.

The Tenderloin Community Benefit District is also spearheading the Larkin Street Lighting Project, which seeks to activate Little Saigon with a public art installation that uses "light as an artistic and creative medium" to attract and engage visitors. The CBD plans to share initial designs and collect community feedback early next year, installing the piece by March 2016.

We'll keep you updated on all these lighting projects as they continue to progress.