In the days leading up to the Super Bowl, 1,600-pound "50' statues have been appearing around the city. While many have been happily snapping pictures with the statues, some residents are voicing concerns that the installations are intrusive, vulgar, and a poor use of money.

Some are going even further—the statue in Alamo Square was tagged the night it was installed; though the graffiti was cleaned off the next afternoon, Gregory Tobey tipped us that it has since lost its solar panels and been tagged again with the words "evict Ed Lee." 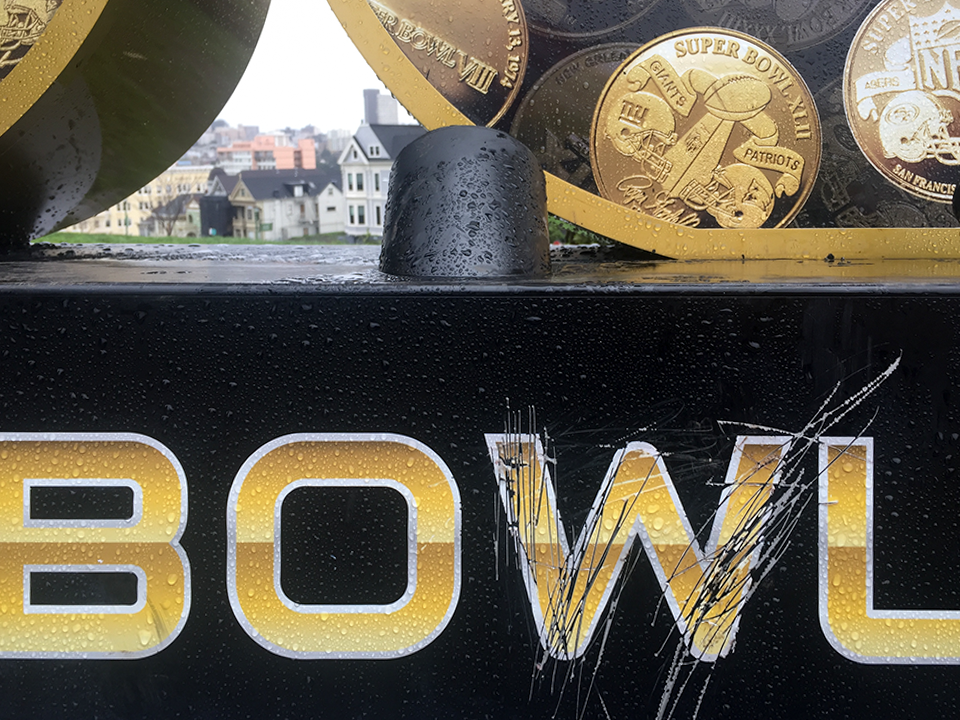 Photo by R. A. Schuetz/Hoodline

Among many reader criticisms of the statues, Mark Gould asked, "Did the residents have anything to say about this? Yes, there's more to the story - did they have to get a permit?"

Four out of the 10 planned statues will be on public lands, including the three installed so far at City Hall, Palace of Fine Arts, and Alamo Square.

Sarah Madland from Recreation and Parks confirmed that the Host Committee and NFL jointly received permits for all four statues. However, though they were charged $1,268 in total for staff oversight of installation at Alamo Square and Palace of Fine Arts, they did not pay the $1,125 application fees for each "minor encroachment" permit.  "The permit fees were waived as this is part of the civic celebration," she said. 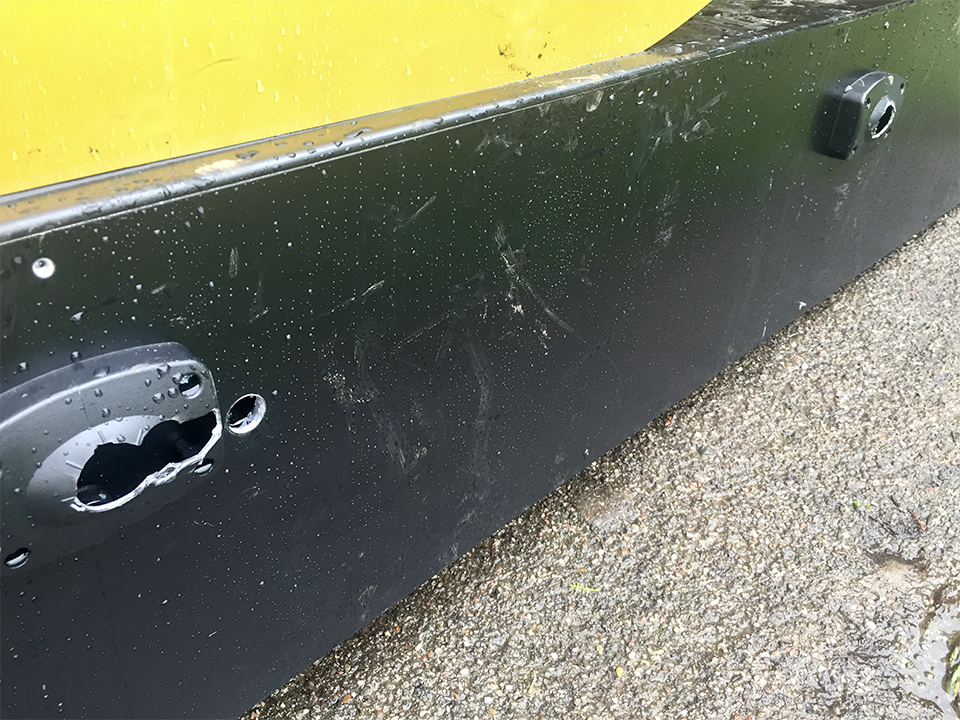 The solar panels were broken off of the Alamo Square and City Hall statues.

The public costs of the Super Bowl have been a concern since before it was projected that it would cost the City an estimated $4,881,625. Recreation and Parks is one of only two departments to be reimbursed by the Host Committee for providing additional services in support of Super Bowl-related public events (the other is the Fire Department). The total reimbursements for both is estimated to be $104,257, which means San Francisco will still need to come up with over four million dollars.

That money will have to come from somewhere in the City's budget—which means departments will have to redirect staff time and resources from planned projects. In comparison, Santa Clara negotiated an agreement for the Host Committee to reimburse all expenses associated with hosting the Super Bowl.

As for whether residents had any say in the statue, Gus Hernandez, the president of the Alamo Square Neighborhood Association, said they received no notification of its installment. "Nobody consulted the Alamo Square Neighborhood Association, because we would have said, 'No, thank you,'" he said. "Instead of trying to recoup the $5 million price tag that the Super Bowl will cost the City, San Francisco is bending over backwards to accommodate the Super Bowl Host Committee. These statues are emblematic of this problem."

Of course, many of the people they were made for—Super Bowl fans—will be from out of town and unaware of the tensions the statues symbolize for locals. Ron Reginald, who stopped by Alamo Square as part of his visit to the city, said he didn't know what the big deal was. "It's very temporary, and it doesn't seem like it's really in the way."

That's where Tobey sees a silver lining in the statues' prominent locations: the fact that they're sparking discussion between locals and tourists. "While I think the NFL certainly isn't contributing as much as they should to our City for hosting Super Bowl festivities," said Tobey, "the NFL 50 sign in Alamo Square Park isn't the big issue, as it is quite the conversation-starter among visitors and residents."