The team behind the massive office, hotel and residential development proposed for First and Mission streets, Oceanwide Center, has grand plans for their open space requirement. If approved, 47 percent of the project's ground-floor area will be privately-owned public open space, accessible to anyone. At the request of the Planning Commission, the developer's architect, Foster + Partners, and the landscape designer, Gustafson Guthrie Nichol, stopped in last week to share a walk-through of the latest ground-floor design. 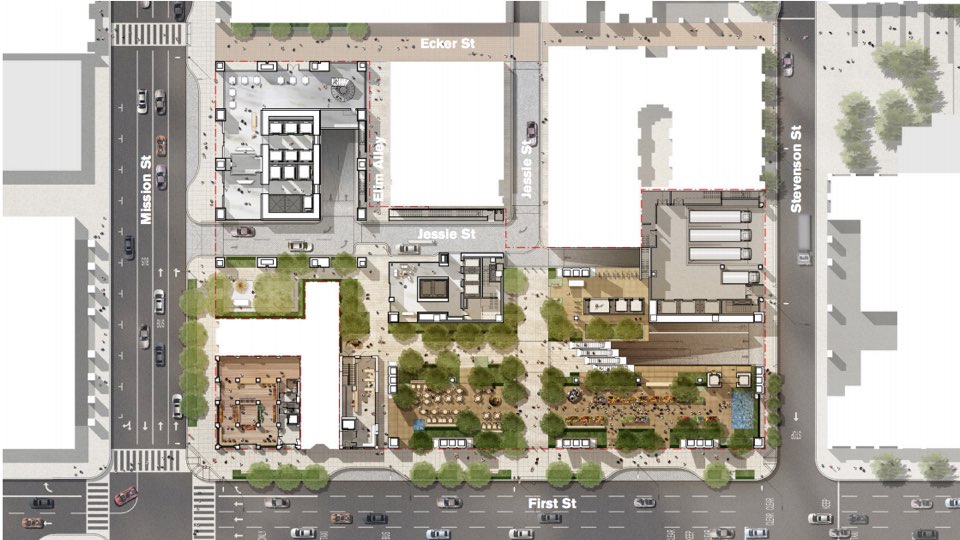 At the same time, the developer is proposing to turn Jessie Street to intersect with Mission Street, rather than First Street, and "vacation" (or pedestrianize) the former portion of Jessie. Vacationing Elim Alley through this block is also being proposed. 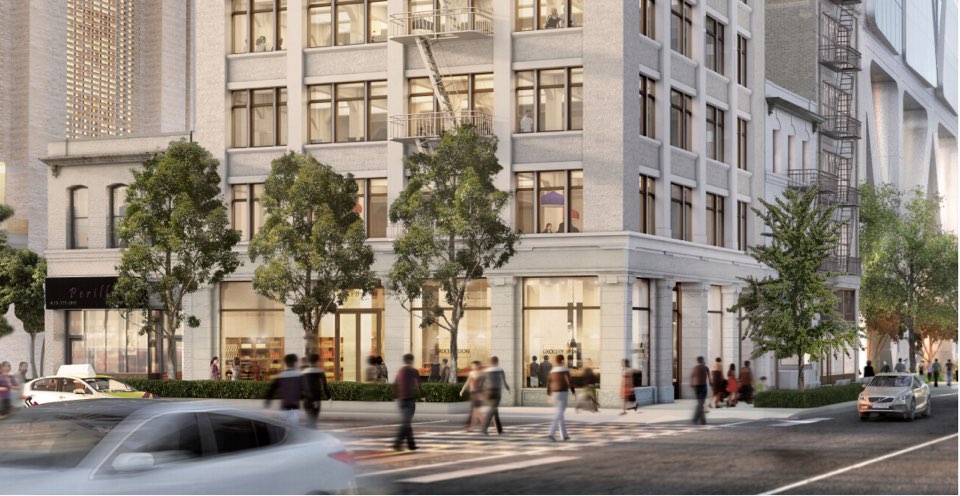 Rendering of the grocery store at the bottom of the rehabilitated 88 First St.

As for outdoor public open space, the developers are proposing a "Pocket Park" with a mobile cafe at the corner of Mission and Jessie, a terrace outside the cafe at 78 First St., and a lush "Urban Room" garden at the corner of First and Stevenson. 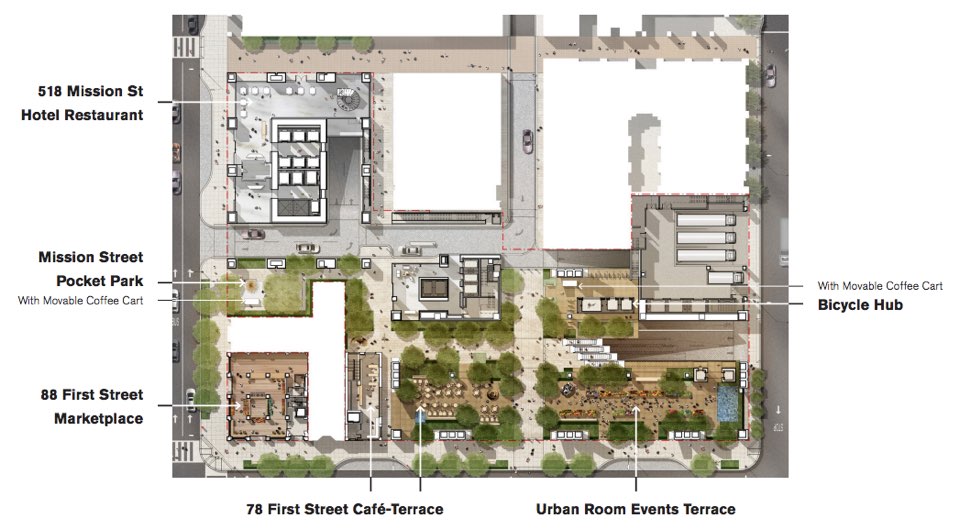 As proposed, the largest section of the outdoor open space is the "Urban Room," which encompasses the first six-stories of the proposed 850-foot tower (910 feet in total). The area will feature space for 100 people, a bar serviced by a basement-level kitchen, a fountain that can be converted into a stage large enough for a four-piece band, and a second-floor viewing platform overlooking the area. With 46 percent of this area dedicated to green space, the project landscape architect, Kathryn Gustafson of Gustafson Guthrie Nichol, considered it an urban garden. 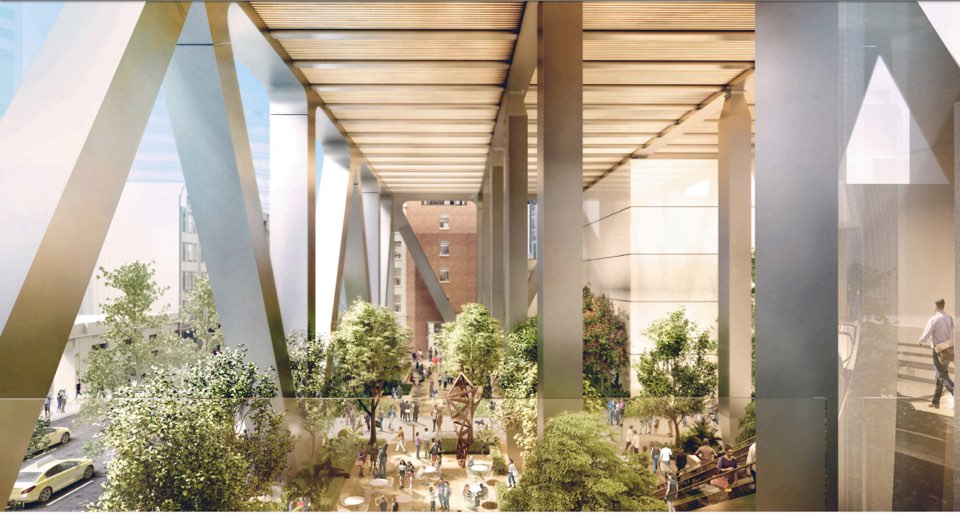 Not all neighbors were pleased with the project, however. An attorney for the owner-residents of 510 Mission and 82-84 First St. raised concerns about the project's eligibility for an environmental impact review (EIR) exemption due to the Transit Center District Plan. The residents, she said, argue that the impacts of this project—specifically, proposed curb cuts along Mission, and vacationing Jessie and Elim streets and rerouting Jessie Street—have not been analyzed in the community plan's EIR.

John Elberling of the SoMa-based nonprofit development firm TODCO argued that despite the developer's sunny renderings, most of the space would see less than one hour of direct sunlight a day. He also urged the commission to require the developer to enclose half of the outdoor space to ensure it's usable when weather is an issue. 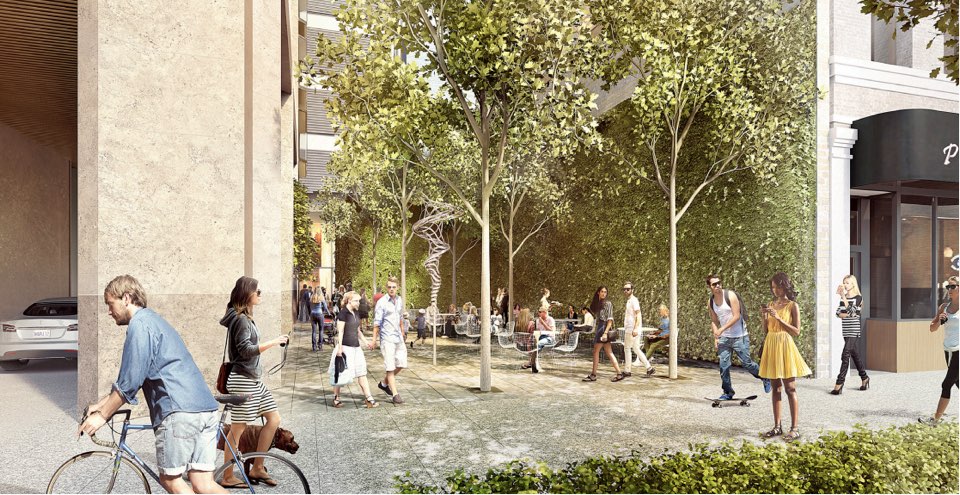 While Commissioner Kathrin Moore said she was in support of the project, she too had concerns about the landscaping and requested less ambitious options to consider. San Francisco's climate would not support a tropical garden, she said, and plans this ambitious rarely come to fruition.

Countering this opinion, Michael Antonini said this will be the "finest open space we’ll have when it's completed." The buildings would protect the space from westerly winds, he noted, and it seemed covered enough. 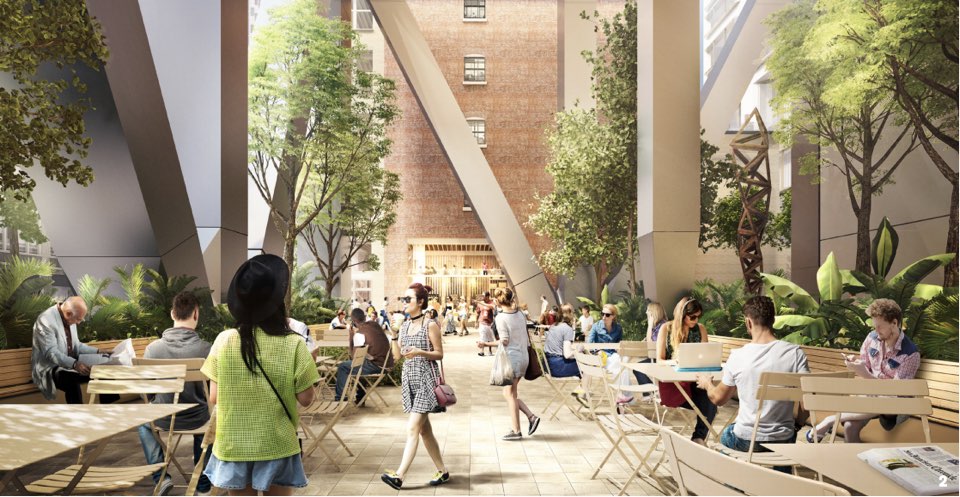 Elberling also urged the commission to table this project until 2017 to ensure a few Central SoMa projects in the pipeline can be approved this year.

Prop M, passed by voters in 1986, limits the amount of office development that can be approved each year. Every Oct. 17th, the city is allocated 875,000 square feet for new office buildings of 50,000 square feet and up, and 75,000 square feet is made available for projects between 25,000 and 49,999 square feet. What isn’t used the previous year is rolled over to the next, but some are estimating that the cap could be hit this year.

According to the Planning Department's packet for this project, the commission can allocate a total of 1,572,299 square feet to large office projects and this project is requesting 1,057,549 square feet—roughly 67 percent of what's available.

While Johnson said she saw Elberling's point, she assured that there would be more presentations on how the developer is designing the office space. She also noted that she hoped to see this project forgo general Class A office space, which many companies are avoiding in favor of SoMa's endangered industrial space. Touching on the Prop M issue as well, Antonini said that the Transit Center District is exactly where the city should concentrate new office developments.

The Planning Commission is currently scheduled to take action on this project on May 5th. In the meantime, you can view the full presentation online here and stay tuned for further updates.