Photographer Janet Delaney Returns To SoMa For A Fresh Look

The other day, photographer Janet Delaney was in her studio, looking up at a wall covered with large photographs. In one, a man stands on a street corner next to a shopping cart, a phone peeking out of his pocket, a sly smile under his beard. In another, a woman sits in a minimalist condo, her windows facing more windows, the small patch of sky outside a stark gray. Buildings are prominent in many of them, often rising up from within thick tangles of cranes.

“I'm not a photographer who can just land someplace and make pictures and go onto the next thing. Everything looks interesting when you do that,” she said, gesturing at the wall. “It's a lot harder to stay home, but I'm hoping I'll make better pictures.” 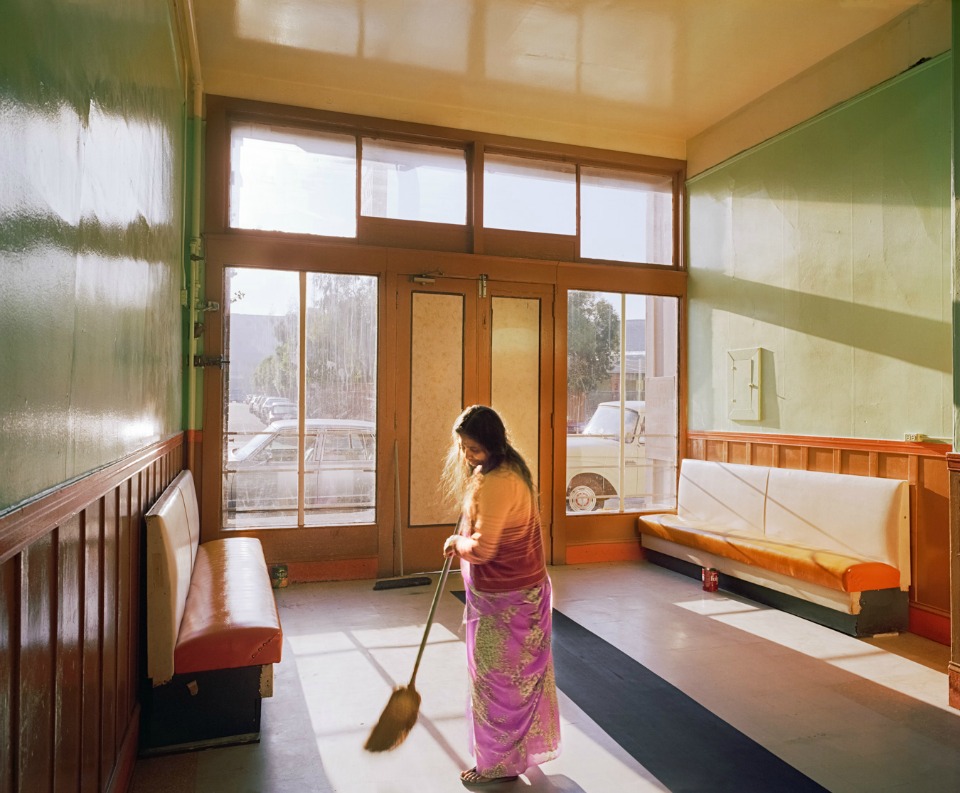 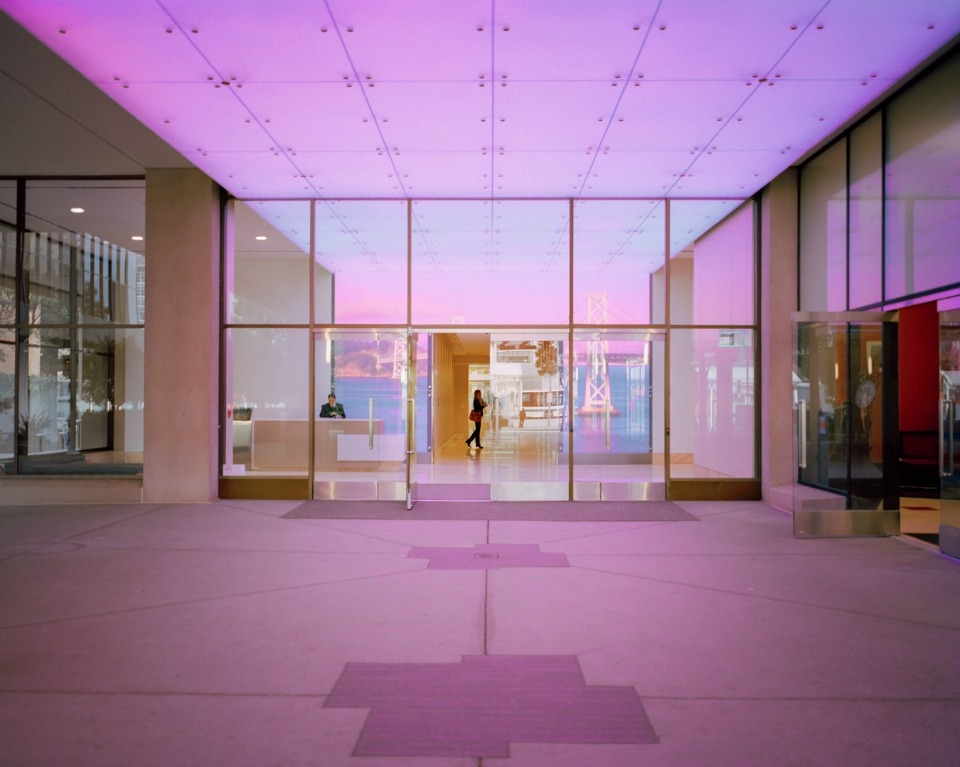 The photographs are part of Delaney’s latest effort to capture the SoMa neighborhood as it undergoes yet another period of transformation. In her first South of Market project, which she worked on from the late-1970s through the mid-1980s, Delaney documented the dramatic changes that surrounded the construction of Moscone Center. She was living nearby at the time, and many of her photographs depict her own neighbors, as well as the other artists and local businesses threatened by the area’s rapid growth.

Delaney now finds herself confronting some of the same issues — gentrification, rising rents — as she did back then, although many other aspects of the landscape have since changed. Tech firms and high-rise condos, for instance, are the newcomers, while the working-class communities she once knew are long gone. However, with several large development projects for SoMa now on the horizon, as well as the growing sense that San Francisco as a whole is reaching a new tipping point, Delaney considers this the perfect time to return to her old neighborhood once again. 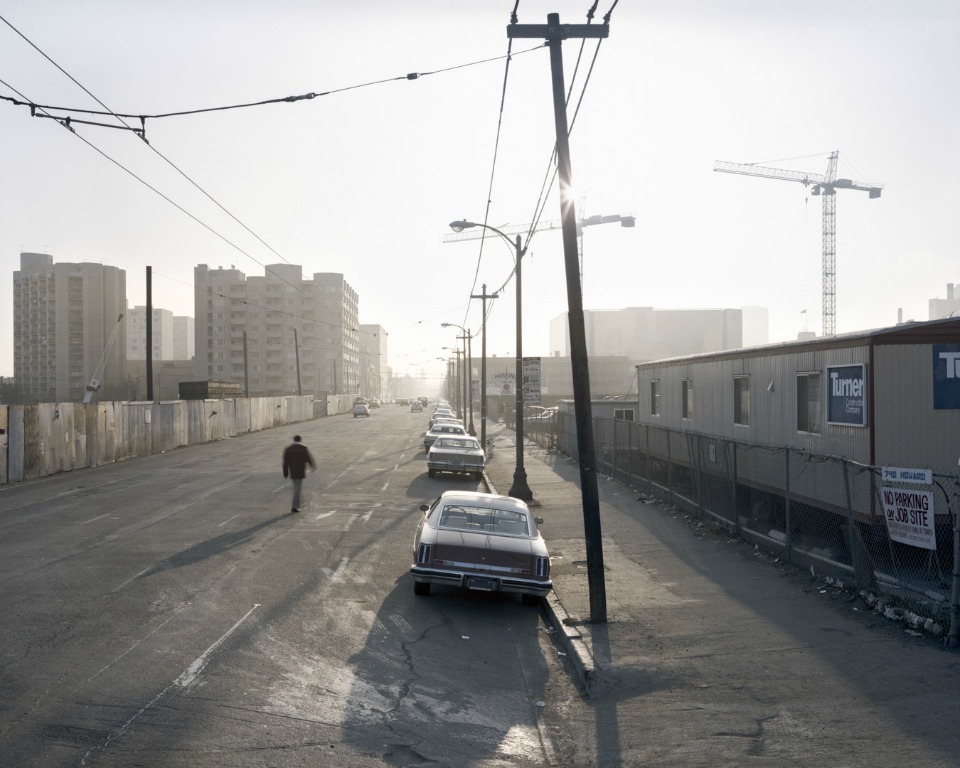 Saturday Afternoon, Howard Between 3rd and 4th (from South of Market) by Janet Delaney 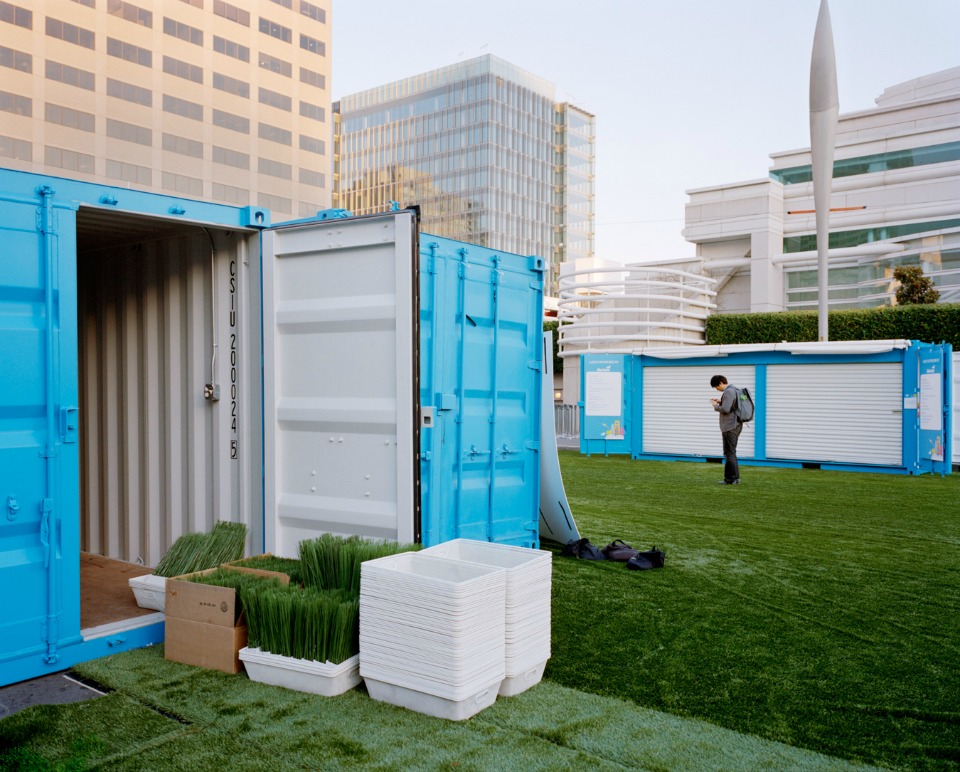 For Delaney, the path back to SoMa has been long. She began her initial South of Market project when she was just a 26-year-old graduate student, too new to the city to know what the massive, multi-block construction pit near her home was. Nevertheless, she would sometimes sneak through the chain-link fences to photograph workers dangling from towers of rebar. After learning that the convention center they were building had displaced some 5,000 people and 700 businesses, she began to wonder about the community around it as well.

Over a period of eight years, Delaney tried to give a voice to her neighborhood. Using a large-format camera and tripod, she would go into restaurants, offices and homes, set it up, then sit down.

“I realized that when I walked into a place with a view camera, I got people's attention,” said Delaney. “I was working where they were working. If I come in with a little camera and I'm just kind of sneaking pictures it's not nearly the same conversation as when I come in with something that's much more substantial and slow.”

Looking at these photographs now, it's hard not to notice the urgent parallels to today: the evictions, the angry graffiti scrawled over walls and windows, the hopeful billboards promising change. However, a large part of their appeal also lies in what is no longer visible in the neighborhood. Before they were priced out, Delaney created portraits of shop owners crouched over lunch counters and artists sitting in their lofts. In one shot, a leather-clad man sneers at the camera from his motorcycle. In another, a young mother sits in her apartment with her daughter, both looking pensively away.

In 1986, when she was finished with the project, few recognized what Delaney had done. The future that she had expected hadn’t happened yet. The neighborhood still looked too similar to when she had started, and only a handful of galleries were willing to show her work.

So she moved on. She left San Francisco and travelled to places like Beijing and Delhi and Mexico City, photographing the ways that communities grow out and evolve. She settled in Berkeley and married and raised a family, teaching photography and occasionally taking on new projects as they arrived. She put her South of Market photos away and mostly forgot about them. More than two decades passed. 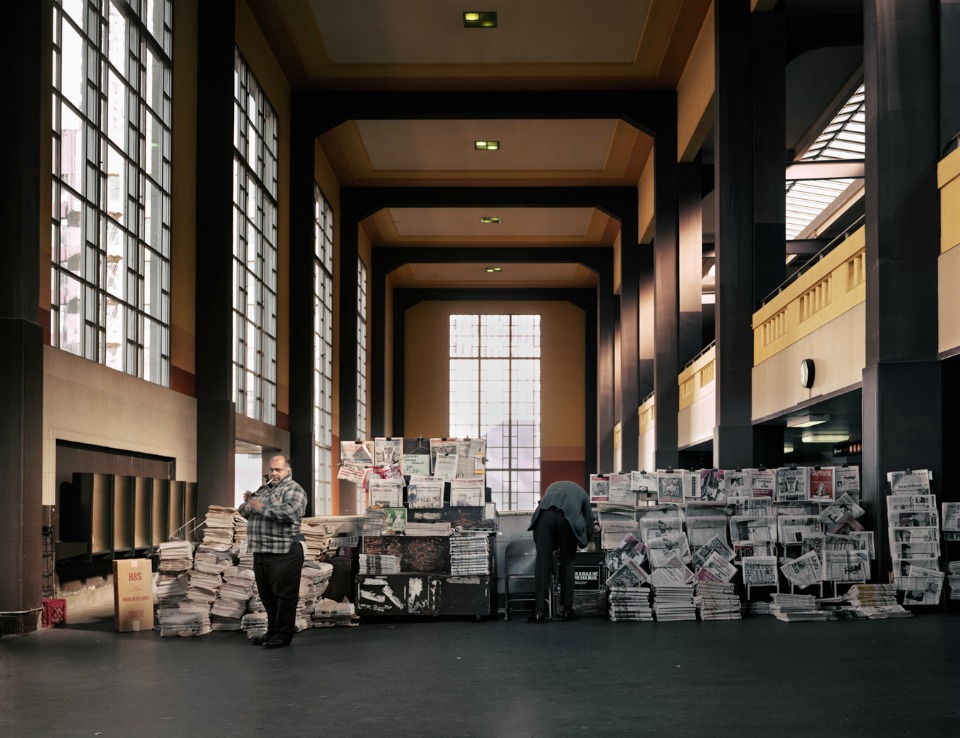 Transbay Terminal Newsstand (from South of Market) by Janet Delaney 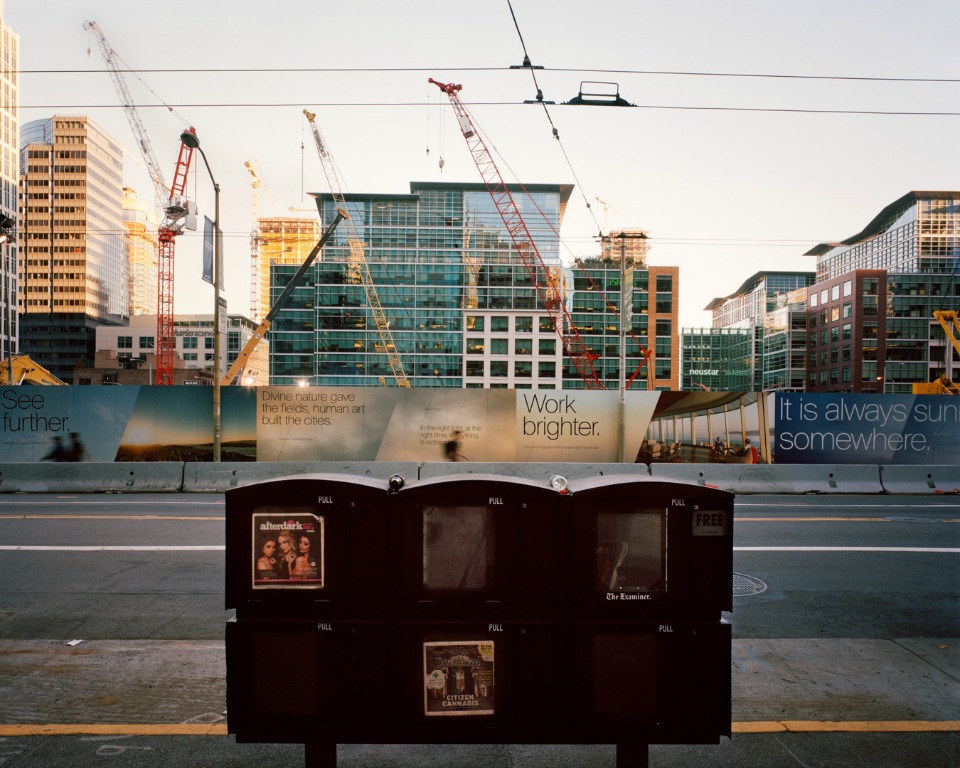 “I was not aware of how one makes a career in fine art,” said Delaney, reflecting on her choices. “Other people my age did it, so I think it was naive on my part or I just didn't pay attention or care enough about it. I’m just very pragmatic, I think.”

In 2009, however, Erin O’Toole, a curator at SFMOMA, helped Delaney publish a book of her South of Market photographs after discovering them at a group show. Preparing for the book, and then for the full exhibition the de Young Museum put on last year, Delaney decided to look anew at the South of Market neighborhood. 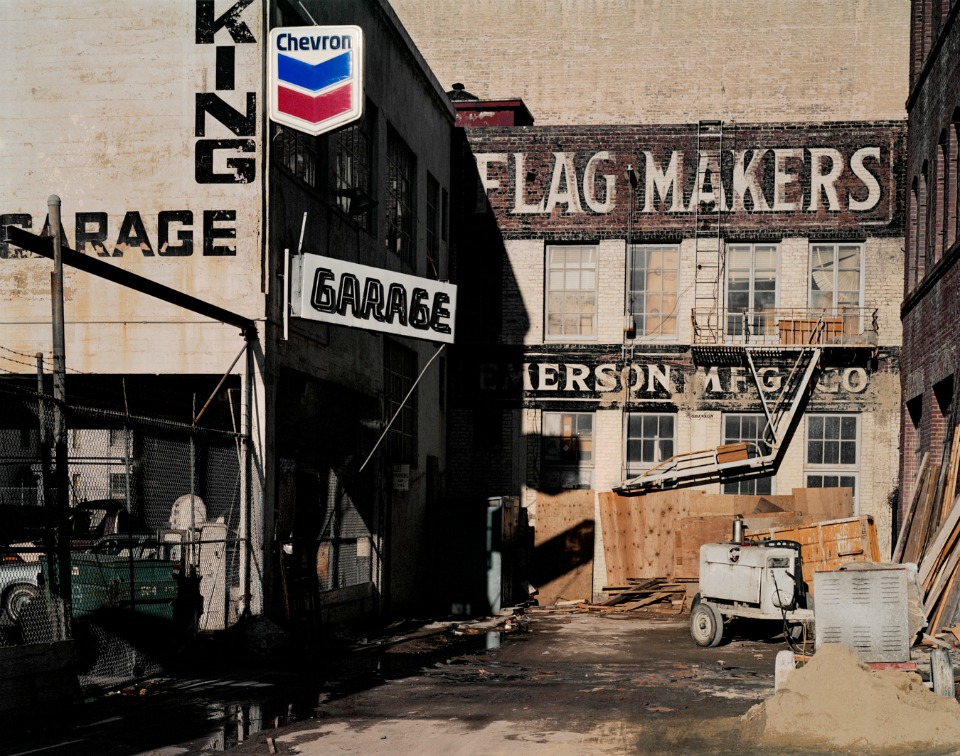 Flag Makers, Natoma at 3rd Street (from South of Market) by Janet Delaney 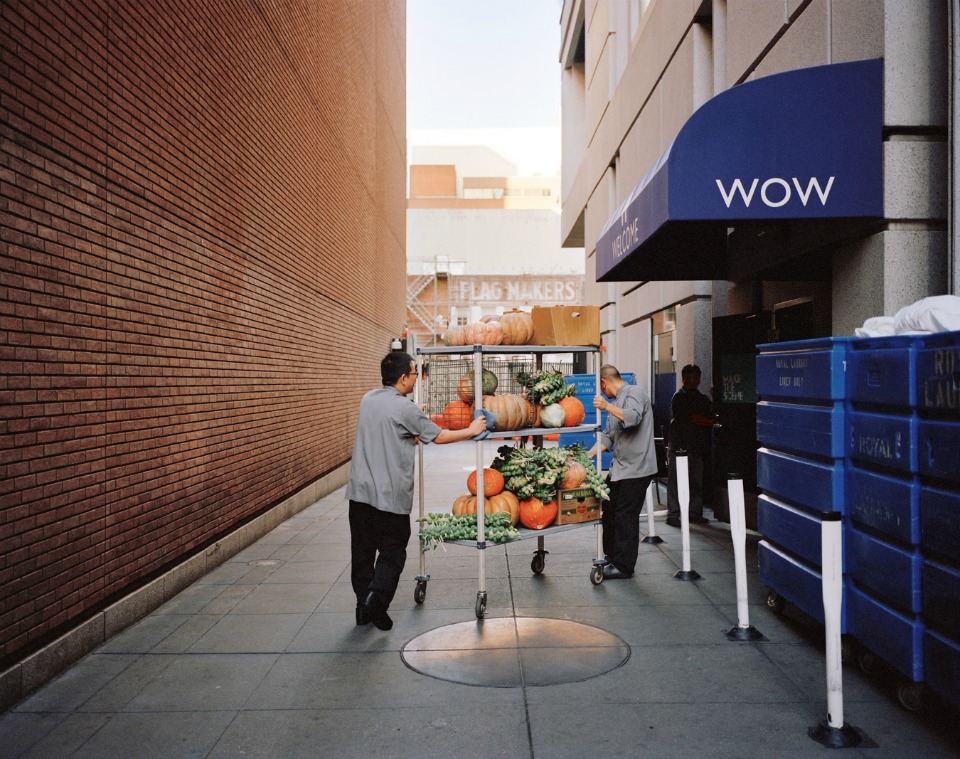 Although her work is still in progress, Delaney says that this new SoMa series can be seen both with her older one, as well as independently. “I think I'm building on the knowledge, but not specifically extending that original project,” she said. “I have all this background, so why not use it? I don't feel quite as specific. I think when I was younger there was more of a ‘them’ and an ‘us.’ At this point, I'm just assuming a more generous position.”

Rather than come down on one side of gentrification or the other, Delaney said she is trying to use these new photographs to look at “how the city has been impacted by new technology and what the new fabric is of life on the street.” She wants to know who lives and works here now.

In this new era, though, even this can be hard. Delaney lamented how many places now require appointments to get in. More people get easily aggravated at the sight of someone taking pictures, too, and security guards will immediately ask her to leave. Some companies will only grant permission to shoot after sending her sheafs of legal documents first.

Delaney also faces the challenge of now being an outsider. “I'm not part of the culture, in the sense that I'm not a 25-year-old tech worker or a 27-year-old artist trying to make it in the city,” she said. She has to drive into the city now, and no longer has a network of neighbors that she can rely on. But she's determined to see this as both a blessing and a curse.

“I think it's very difficult to see things when you're in it,” she said. “I'm trying to maintain a sensitivity to that. I think that, in some ways, being an outsider helps because when I go to the city I'm still in awe. And I know when you live there everyday you stop seeing it. I'm hopeful that that helps me keep my eyes open.”

Delaney is also hopeful that her experiences of the past 30 years will help her build on her original South of Market project and create something relevant and powerful for today.

“I want this new layer of work to have more,” she said. “Will it resonate in the moment or do I have to wait 30 years? That would be my biggest question. Can I make new work, or is it really just the fact that the work is old?”

In conjunction with PhotoAlliance, Janet Delaney will be giving a presentation at 7pm April 8th at the San Francisco Art Institute Lecture Hall at 800 Chestnut Street. Tickets ($10) can be purchased at the door.

San FranciscoSoMa
About 17 hours ago