At the end of 2015, the Board of Supervisors voted to reject plans to construct a new $240 million jail in SoMa, intended to replace the one in the seismically unsound Hall of Justice at 850 Bryant St. They also decided to create a working group to devise an alternative plan, centered around constructing a facility that would provide mental and behavioral health services for the criminal justice system.

But the city is now making efforts to keep the $80 million state grant it won to help pay for the new jail on the table—despite expectations that it would have to turn down the funds once the jail plan was rejected.

In a letter from Public Works Director Mohammed Nuru to the Board of State and Community Corrections (BSCC)—obtained by the Californians United For A Responsible Budget—Nuru has asked the BSCC to give the city a 180-day deadline extension for deciding whether to accept the award and build the jail as proposed, submit minor alterations to the original plan, or reject the award altogether.

The original plan proposed constructing a new jail over 40,276 square feet on Bryant between Sixth and Seventh streets, a block from the existing jail facilities at the Hall of Justice. After purchasing $14.5 million in property on the block and razing multiple existing buildings, the new jail would construct 384 maximum-security beds to replace the Hall of Justice's. Today, only one of the HoJ's two jails, Jail #4, is currently in use; it has capacity for 402 inmates. 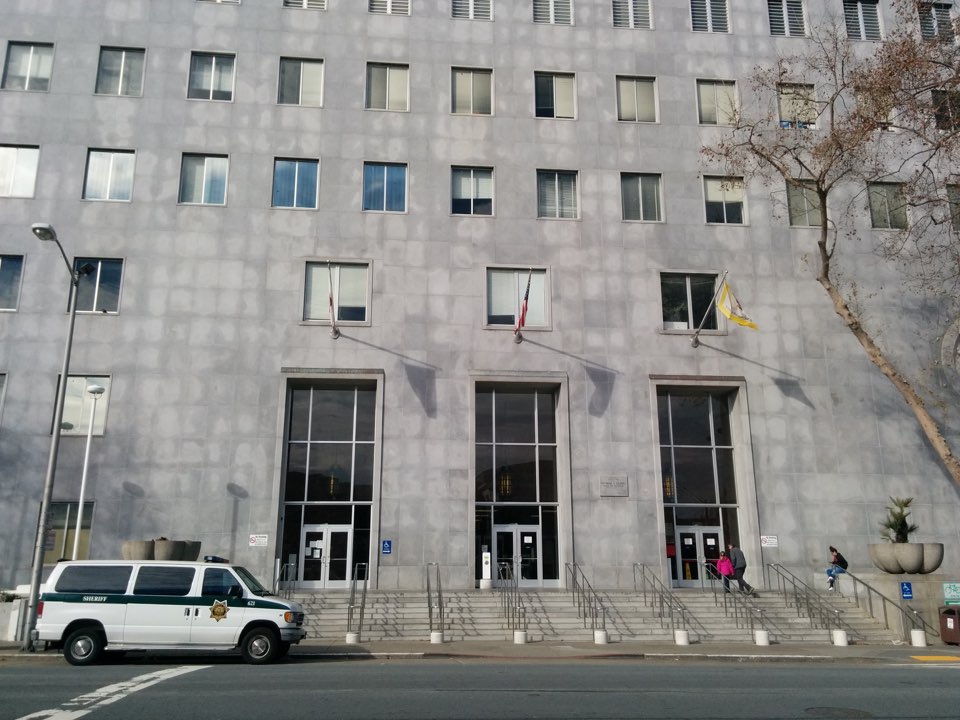 The Hall of Justice at 850 Bryant St. (Photo: Brittany Hopkins/Hoodline)

The city's request for more time to make a final decision on the grant was delivered to the state after Nuru penned a letter to the Board of Supervisors stating that unless he heard otherwise, he would officially reject the state's money.

According to the Chronicle, Nuru wrote in that correspondence that "the city [will] most likely will be deemed ineligible for the grant funding if the project scope is significantly altered." The report also noted that the BSCC had told the Board of Supervisors that “it has never approved or even considered a project that has completely changed from the one originally submitted.”

In a communication to residents opposed to the construction of a new jail, Californians United For A Responsible Budget is calling the extension request "sneaky backroom maneuvering" intended to keep the rejected jail plan alive. But Conor Johnston, a legislative aide for BoS President London Breed, told us that it is actually a result of the legislation the board passed creating the working group.

"The extension request did not come from our office, per se. But Supervisor Breed did outline this possible approach in her Board resolution creating the jail replacement working group, which passed unanimously on January 12th," Johnston said via email. "She’s leading the conversation about alternatives to the jail, while keeping the state funds on the table--if they can be used for those alternatives."

But how much the city can stray from the original proposal without losing the grant is still unclear. "Ultimately, it’s something the working group will need to weigh," Johnston said. "We’ll try to be optimistic."

While the board did vote unanimously not to allocate the remaining $160 million from the city's coffers to fund the jail proposal, not all of the Supervisors are opposed to constructing a new jail. In response to Nuru's assertion that a major alteration to the jail plan would likely be rejected by the state board, District 2 Supervisor Mark Farrell told the Chronicle that the BoS' rejection of the plan in December was a "mistake ... ultimately, we are going to need to build a new jail," due to the potentially dangerous conditions at the Hall of Justice.

The working group, officially titled the Work Group to Re-envision the Jail Replacement Project, is holding its first meeting from 2-5pm this Wednesday, March 11th, at 25 Van Ness, Room 610. The meeting is open to the public, and details on the monthly meetings will be posted on the Department of Public Health's website for the group.

According to Nuru's latest letter to the state, the working group is expected to deliver a recommendation on "what facility or facilities may be needed to address the full gamut of issues and concerns regarding mental health and justice systems in San Francisco" by October 2016—although DPH's webpage estimates it won't be until November 2016.