Unlike the smaller cable cars that move tourists up and down Powell and Hyde streets — which can only be operated from one side and require a turn-table at each end — the cars used on California Street can be operated from both sides. That means the cars can turn around just by flipping a switch once they reach the end of the line.

According to the Lower Polk and Discover Polk Community Benefit Districts, the current western terminus is just “a sudden endpoint in the middle of a busy street.” The two partnered with INTERSTICE Architects, headquartered on nearby Sutter Street between Larkin and Polk, to study and propose options for what the eastern intersection of California and Van Ness could look like in the future.

During a public meeting yesterday, representatives from INTERSTICE and the two CBDs compared the current state of the Van Ness Avenue turn around to the line’s eastern terminus, on Market Street. 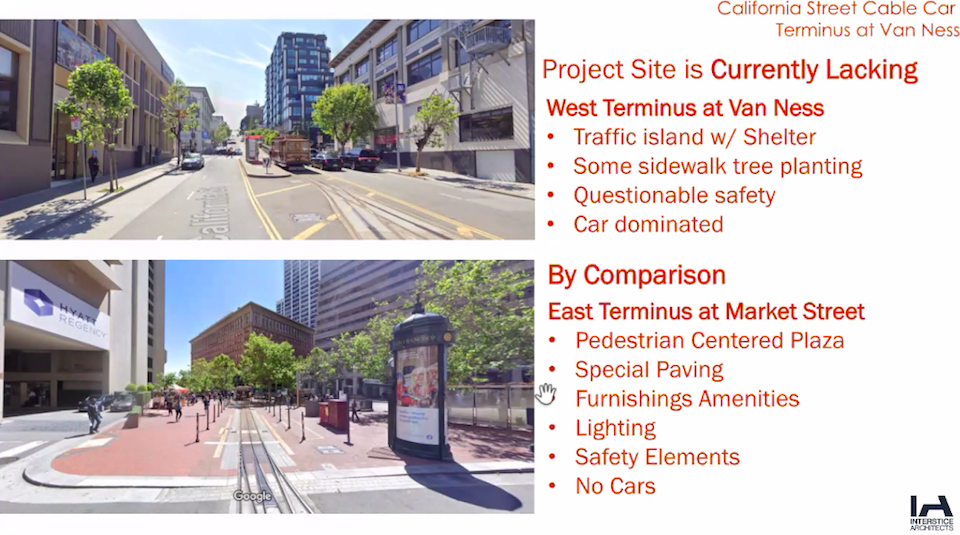 The Market Street terminus is “much more pedestrian focused,” with “a sense of place” created with special paving, site furnishings, lighting and plantings, and, most importantly, no access to personal vehicles, according to INTERSTICE chief executive and managing partner Zoee Astrachan.

The city’s other cable car turnarounds, on Powell, Mason, and Hyde and Beach Streets, are similarly already pedestrian-only.

The idea to transform the stretch of California between Polk and Van Ness was “first discussed many years ago,” Erica Waltemade, art and peacemaking manager for the Lower Polk CBD told the meeting yesterday. The two CBDs believe the block can “serve as a gateway” to the lower and middle Polk Gulch neighborhoods. They’ve received a grant from the Mayor’s Office of Housing and Community Development to conduct a paper study, based on public outreach and successful examples in San Francisco and elsewhere, to identify proposals that could improve the block, from Van Ness Avenue to the intersection at Polk and California. 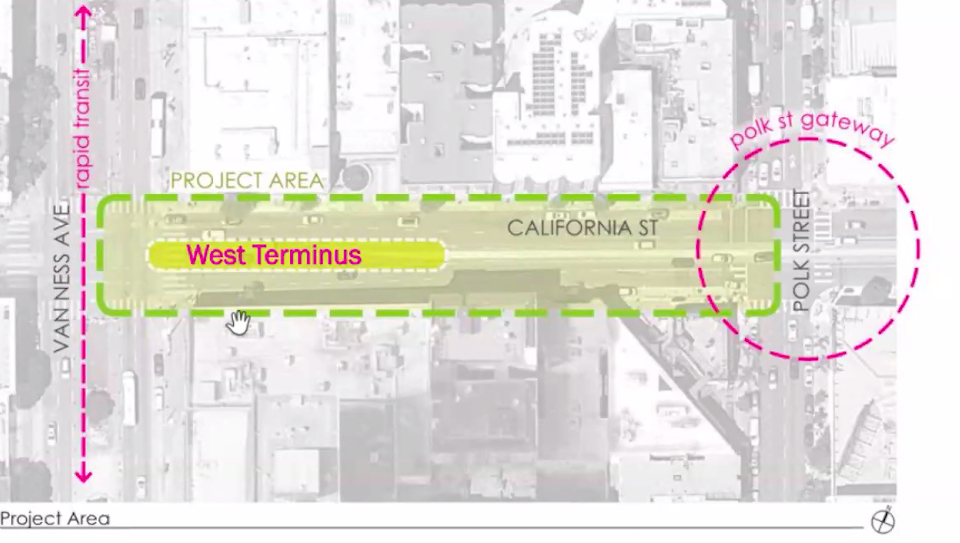 Attendees were split into break-out rooms and asked to consider a variety of options that could make the turnaround more of a “space,” through colorful paving; improved seating and waiting options that include shelters and shade; lighting and barriers; and plantings to improve the space’s sustainability. Safety improvements could include everything from improved crosswalks, a larger boarding platform, signs warning drivers to slow when approaching the intersection, and bike line indicating sharrows.

Given the cable car line’s importance in San Francisco’s history and the National Landmark status of the cars themselves, the two CBDs are interested in ideas for improving the historical signage at the site through public art and other means. Currently, there is only a mural and small informational sign on the Wells Fargo on the southeastern corner.

While there is a small mural and historical sign already, improved representation of the cable car's history could improve the space.

“We are in the very early stages,” Waltemade cautioned. “It is only an outreach and planning project, at this stage.” The two CBDs will host another meeting to get further comment in the first quarter of next years, and in late Q1 and early Q2, will work with INTERSTICE to pull takeaways into “a shareable concept” that will include executable proposals for improving the space, Astrachan said. Then they will move into a fundraising phase that will include further discussion about prioritization — what to implement and when.

You can follow the progress and find out about future public meetings at https://lowerpolk.org/cablecar/. In the meantime, you can enjoy Discover Polk CBD's holiday lighting displays, which get flipped on tonight. From December 10 through January 6, 2021, local businesses are donating the power to light up 30 trees along Polk Street, starting at California Street, and the CBD is deploying two projectors to send large-format festive images onto the Walgreens at Polk and California streets, and the old Lombardi's Sports location (Jackson and Polk streets).