Poles show the outline of the proposed residence on a hill overlooking Morgan Hill. Photo: Green Foothills
By Laila Weir - Published on May 12, 2021.
San Jose

Environmental groups and neighbors are objecting to the construction of a large residence on a hillside overlooking Morgan Hill, saying it violates rules protecting the area's ridgelines from development and protecting rare native plants.

"It is not enough to have good environmental rules — they need to be applied in practice," argues San Mateo County and Santa Clara County conservation organization Green Foothills, which has objected to the development on the basis that it violates the Santa Clara County General Plan's directive against developing on ridgelines.

The county has approved the project, declaring that it's not located directly on a ridgeline — a finding that Green Foothills vigorously disputes. "The proposed development is not located on the ridgeline, but rather, behind the ridgeline in an area that is buffered by a natural knoll to the north of the proposed location," states a Santa Clara County planning department report.

Green Foothills disagrees. "County staff is denying that, in this case, the mansion-sized house located on the top of a steep hill with a narrow, flat top, visible from the valley floor is on a ridgeline," the organization says in a blog post. "This location should be more than enough to qualify as a 'ridgeline.' But there’s more. The line at the top of the long, linear hill also forms the boundary between the two major watersheds of Santa Clara County."

“I’m trying to figure out how this could not be considered a ridgeline (development),” Brian Schmidt of Green Foothills told San Jose Spotlight. “You could see this thing from all over the place.” 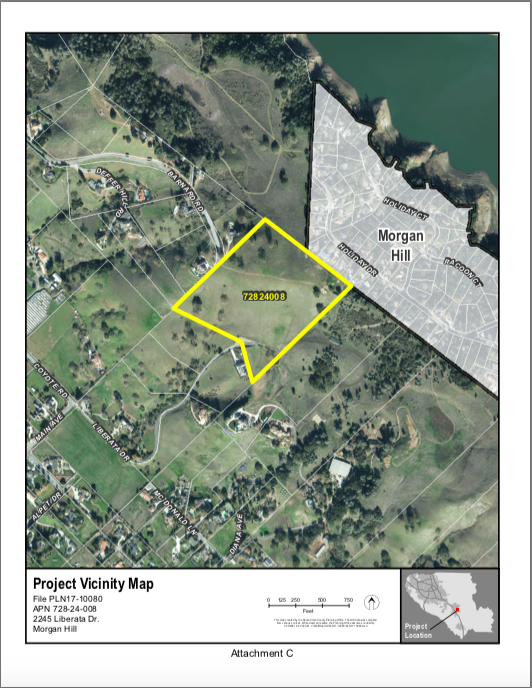 "The County’s authority to issue permits affecting species covered by the Habitat Plan relies on the County’s complying with the plan," says Green Foothills. "However, the development footprint of the house extends into the area identified as smooth lessingia in the County staff report and disturbs or destroys nearly half of the habitat on the property. If this project proceeds, this will be the first time that lessingia will be destroyed under the Habitat Plan — all other projects have avoided their habitat."

In addition, Green Foothills claims that trees were removed from the development site without permits.

San Jose Spotlight reports that planning department officials say they've asked the property developers to resubmit updated plans resolving "discrepancies" in their application and will revisit the issue once they receive those plans.

"Rejecting this as a ridgeline and approval of this development raises the question of whether the County could ever adequately enforce ridgeline protection required in the General Plan," declares Green Foothills.

“Once you allow developers to violate the general plan once, how do you tell another one they can’t?” Morgan Hill resident Raymond Grzan said to the Spotlight. “We just have to draw the line. We just have to say, ‘This is where we stop and give nature space.’”