Over the course of the pandemic and attendant lockdowns, reports proliferated around the world of wild animals prowling empty streets in urban areas they normally avoid. Now, as people are increasingly back in public, wolves are running in Palo Alto — digital wolves, that is.

The animated pack is a roving art installation funded through the city's public art program to celebrate the community's emergence from the pandemic. Multimedia artist Joshua Curry, who creates under the name Lucidbeaming, projects the animation from the back of a bicycle. Lucidbeaming is taking the wolves on an hour-long ride around Palo Alto just after sunset each evening this week. 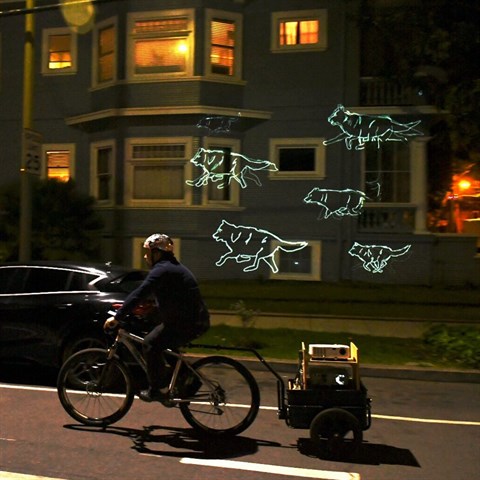 Lucidbeaming began the wolves project long before COVID-19, originally inspired by wolves returning to the site of the Chernobyl disaster — "a sign of an ecosystem beginning to heal after a large natural disaster," as a Palo Alto Public Art Program announcement puts it.

But the pandemic hit before the project was finished, bringing a new twist and timeliness to the installation. "[T]he Covid lockdown was in full swing and American city streets looked abandoned," Lucidbeaming wrote on his blog. "We all started seeing footage of animals wandering into urban areas. It made sense to finish the Wolves project as an urban performance, projecting onto buildings from empty streets."

Watch the wolves on display in San Jose Video: Lucidbeaming

And so he did. Lucidbeaming ran the wolves through the streets of San Jose several times during the darker days of COVID, but the Palo Alto show is the first time many people are out and about to see them. “The Wolves project started with the idea of balance in nature,” Lucidbeaming comments. “I decided to bring that into the modern city to show the wolves running on the sides of buildings and houses in the empty urban environments. It connected with many people.”

Lucidbeaming shares that a favorite moment during previous outings with the pack was when he rode them around a San Jose neighborhood during a power outage. "Whole neighborhoods were dark, except for me and my wolves," he recalls. "I rode by one house where a bunch of kids lived and the family was out in the yard with flashlights. The kids saw my wolves and went crazy, running after them and making wolf howl sounds while the parents laughed."

The artist completed the project over two years, hand-drawing hundreds of animation frames to digitize video footage of running wolves.

How to see the wolves:

The wolves will be out for one hour every evening through Saturday, from 8:15-9:15 p.m.

Lucidbeaming will ride a California Avenue route on Wednesday, May 12; Loma Verde route on Thursday, May 13; Downtown North route on Friday, May 14; and California Avenue again on Saturday, May 15. See the Palo Alto Public Art website for an Interactive Tour Map showing the exact routes. Lucidbeaming's website will also will have live updates during each ride on its Wolf Tracker page.