The Flintstones can stay: Hillsborough and Florence Fang reach settlement over figures & more at 'Flintstone House'

The whimsical "Flintstone House" in Hillsborough can keep its oversized dinosaur sculptures and cartoon figures, after the town settled a lawsuit with the property's owner, retired San Francisco newspaper owner Florence Fang. The deal has the city forking out $125,000 to cover Fang's legal costs and leaving the Flintstones and compatriots alone.

The case — or rather cases — pitted city code enforcers against quirky individualism (some would say tacky). Both parties were suing each other, with Hillsborough first going after Fang for making extensive changes to her yard without permits, calling the property an "eyesore," and Fang then hitting back with a claim of discrimination.

The cartoonish property has garnered loads of attention, not surprisingly, as has the city's attempt to tone it down. But the parties settled the case quietly in April, due to a gag order that kept the settlement out of the press until the Palo Alto Daily Post broke the story. Under the agreement, the city will pay Fang $125,000 and approve permits for her backyard changes, the Post reports. 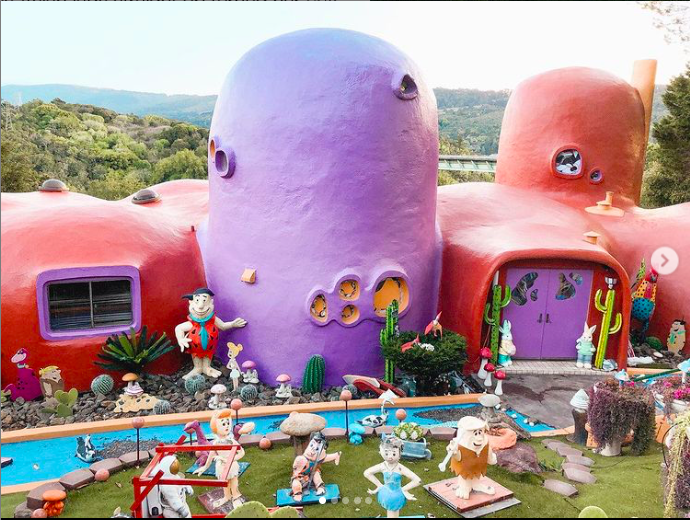 Fang purchased the house at 45 Berryessa Way (which is visible from I-280) in 2017 as a party spot and "happy place"; she primarily lives elsewhere in Hillsborough. She took the already Flintstone-esque 1970s house built by architect William Nicholson and upped its cartoon fun factor with the giant dino sculptures, statues of Flintstone characters and a “Yabba Dabba Doo” sign – plus some more mundane improvements like a staircase, parking strip, deck and more in its front and large back yards.

But the party hit a snag when town workers noticed the work (and, really, who could miss it?): It involved more than 10,000 square feet on the property, triggering a requirement for planning department approval. The town issued three "stop work" orders and finally sued Fang, whose family previously owned the Independent and Examiner newspapers in San Francisco.

Fang, with the help of attorney and former SF supervisor Angela Alioto, responded with a suit claiming she'd been discriminated against based on race. Alioto argued that other residents likely don't get permits for their statues or renovations but haven't been targeted by the city in the same way, as reported by the Post, SFist, and other outlets.

The Post reports that the settlement, which the town council approved on April 12, includes an order that neither side could contact the media, and specifying the parties could only respond to media inquiries with a prepared statement: “The parties have reached an amicable resolution of the case to the satisfaction of all the parties, such that the improvements made to the Flintstone House will be permitted to remain.”

Under the deal, Fang dismissed her claims against two city employees for allegedly impeding her permit attempts and dropped her racial discrimination claims, the paper notes. The agreement specifies that the city's payment to Fang is “to cover expenses" related to the lawsuit, and are not connected to the discrimination claims.