The Haight Street Fair is indeed returning Sunday, and with Talib Kweli headlining

Back in June, SFist broke the news that the Haight-Ashbury Street Fair was being “postponed,” in an announcement that came just ten days before the fair’s scheduled date of June 12.  You had to wonder if that fair was finished, as it had not been held in two years because of COVID-19. But fair organizers said in a statement to SFist that “With the hiatus over the last couple of years many logistics have shifted, we strive to bring the best experience to the neighborhood and community and want to ensure we deliver."

The Haight-Ashbury Street Fair is indeed back this Sunday, October 16. And as you see from the flyer below, they certainly are delivering when it comes to the live music lineup. 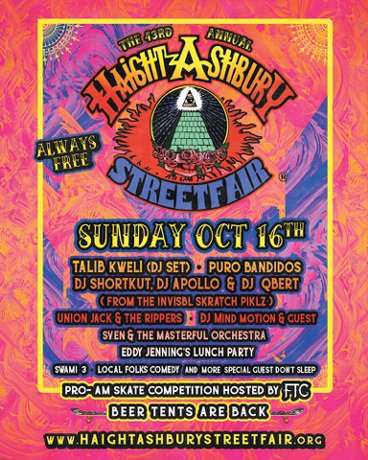 Yes, that is internationally acclaimed rapper Talib Kweli in the headlining spot, known primarily for collaborations with Mos Def (Balck Star) and Pharell Williams. And we also have a mini-reunion of the turntable collective Invisibl Skratch Piklz, with DJ Shortkut and DJ QBert on the decks.

Haight-Ashbury Street Fair co-organizer Kari Zonotto tells Hoodline, “We are very excited to resume the fair, and great performers, musicians, skate competition, vendors both in goods and in food — of course the beer tents too.”

Wait, beer tents? Yes, it’s true, and as the Examiner points out, it will be the first Haight-Ashbury Street Fair since 2006 to offer beer sales — and it's a novelty for anyone who's recently been to the Folsom Street or Castro Street fairs, which offered little to no beer concessions in order to give more business to area bars.

The Haight-Ashbury Street Fair is Sunday, October 16, 11 a.m.-5:30 p.m., on Haight Street between Masonic and Stanyan Streets. Admission is free.

San FranciscoUpper Haight
About 20 hours ago