Photo: Andrew Knapp
By Nuala Sawyer - Published on April 28, 2014.
San FranciscoDivisaderoDuboce TriangleLower HaightAlamo SquareInner SunsetUpper Haight
Bike theft is on the rise, big time. In San Francisco alone it's estimated that 75,000 of the city's residents own and ride bicycles. With the growth in riding comes an bigger market for bike thieves, and city reports from earlier this year state that thefts are up 70% since 2006.
Luckily, our very own Park District police station is on the case and is leading the movement in bike theft prevention for the entire city (if you're not sure what neighborhoods the Park District police station covers, check out this handy map). In addition to the bike registry that was set up earlier this year, SFPD is aiming to catch the repeat offenders themselves. Bait bikes are being planted around the city with GPS trackers inserted in the handlebars. If they’re stolen, they can lead SFPD right to the source and help them potentially uncover a stash of other stolen bikes.
To throw thieves off, SFPD is also giving out 30,000 “Is This a Bait Bike?” stickers for people to put on their own bikes. These will be available for free at your local police station, and there’s plans to distribute them to bike shops as well.
Finally, SFPD also has their own Twitter account, @SFPDBikeTheft, which aims to respond in real-time to notifications of bike thefts, chop shops, and suspicious activity.
Where is all of this newfound ant-bike theft energy is coming from? Mostly from one guy: Officer Matt Friedman of Park Station. He created the Twitter handle and is leading the Bike Bait program. He’s also responsible for this awesome Craigslist ad: 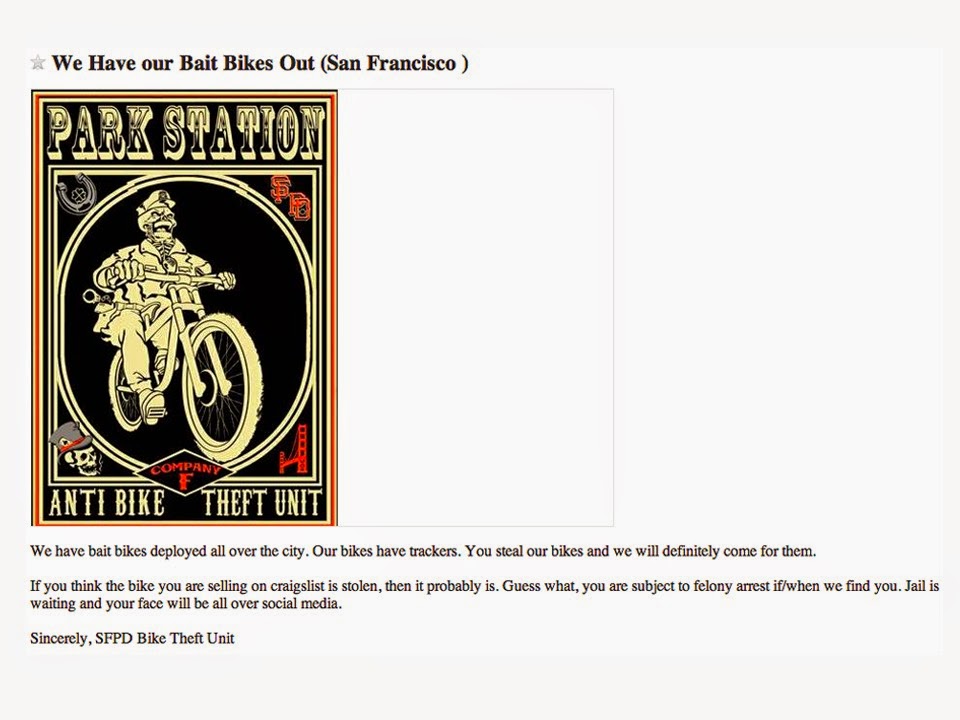 But Office Friedman can’t do it alone. With an increase in bike theft comes added responsibility for bike owners. If you haven't already, register your bike. It’ll take approximately 5 minutes to flip your bike upside down, find the serial number, and fill out this form. 864 bikes were recovered by police in 2012, yet only 142 made it back to the owners. If you had a bike stolen recently and didn't register the serial number in the database above, it's not impossible that it's still sitting in this warehouse.
Speaking of bike theft, SF Bike Coalition has an excellent tutorial on how to lock your bike correctly. If you do get your bike stolen, here’s what we recommend you should do:
What do you think—are we on track for reducing bike theft?
San FranciscoDivisaderoDuboce TriangleLower HaightAlamo SquareInner SunsetUpper Haight
About 20 hours ago