An Update On 55 Laguna

Photo: Andrew Dudley / Hoodline
By Andrew Dudley - Published on July 22, 2014.
San FranciscoHayes ValleyLower Haight
"What's happening with 55 Laguna?"
That's a question that hits our inbox all too frequently here at Hoodline.
We're of course referring to the 5.8-acre, 2-block site bounded by Laguna, Buchanan, Haight and Hermann. Formerly home to the UC Berkeley Extension campus, the location lay dormant for more than a decade, while plans for a new housing complex were stalled by various financial and political challenges. In the meantime, there were murals painted and tagged, a pink bunny installed and destroyed, and the occasional glimpse inside.
But last year, the project did advance, finally receiving the approval—and funding—necessary to break ground.
Alta Laguna
55 Laguna is actually comprised of two developments.  The larger one will feature 330 rental units, 50 of which will be offered below market rate. The units will be spread across five new buildings, plus the repurposed remnants of the historic Woods Hall facade at Haight and Buchanan: 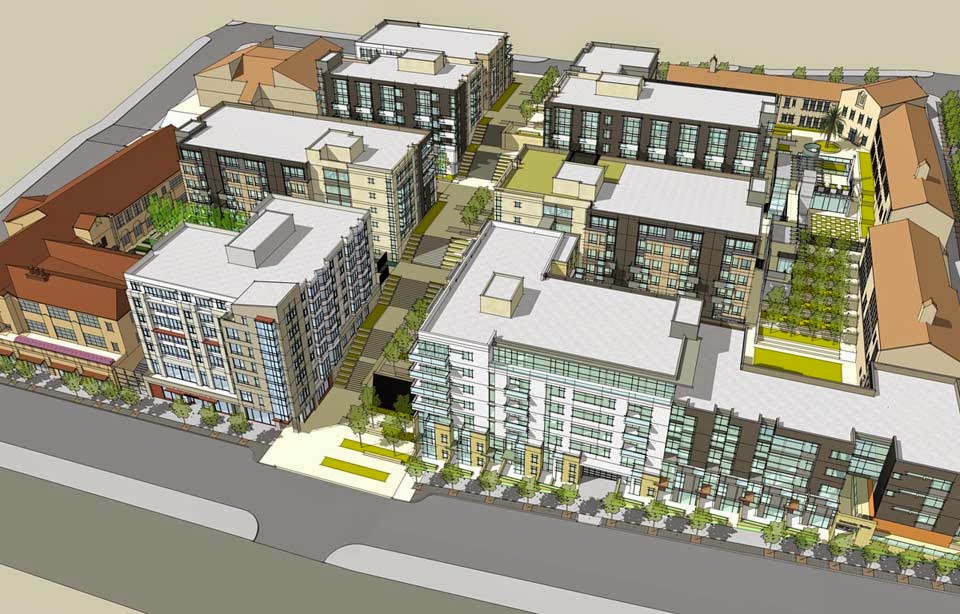 BAR Architects
Construction finally got underway on Alta Laguna in October of 2013, as you can see in this photo supplied to us last fall by reader Jason H.: 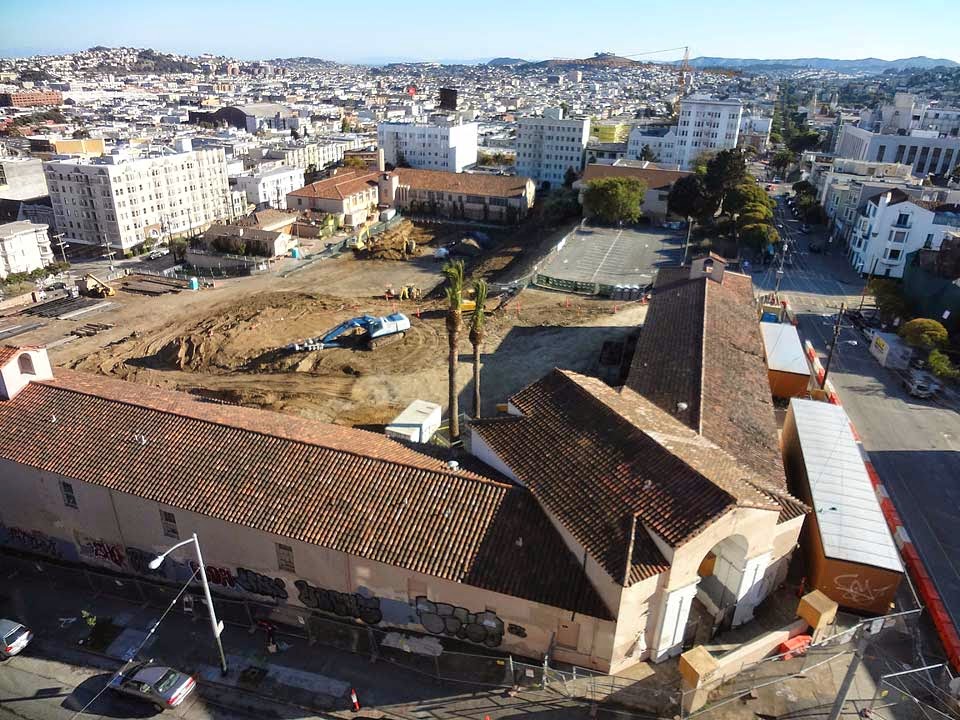 This week we checked in with Wood Partners for an update. Their community liaison Tovey Giezentanner told us that construction is on schedule, and is slated to be completed by December of 2015.

"Nearly all of the dirt moving activities have been completed and much of the underground concrete work has also been completed. The framing is going up now and we’re finalizing architectural details for the exterior facades, among other things."

Here's a view of Haight and Laguna now... 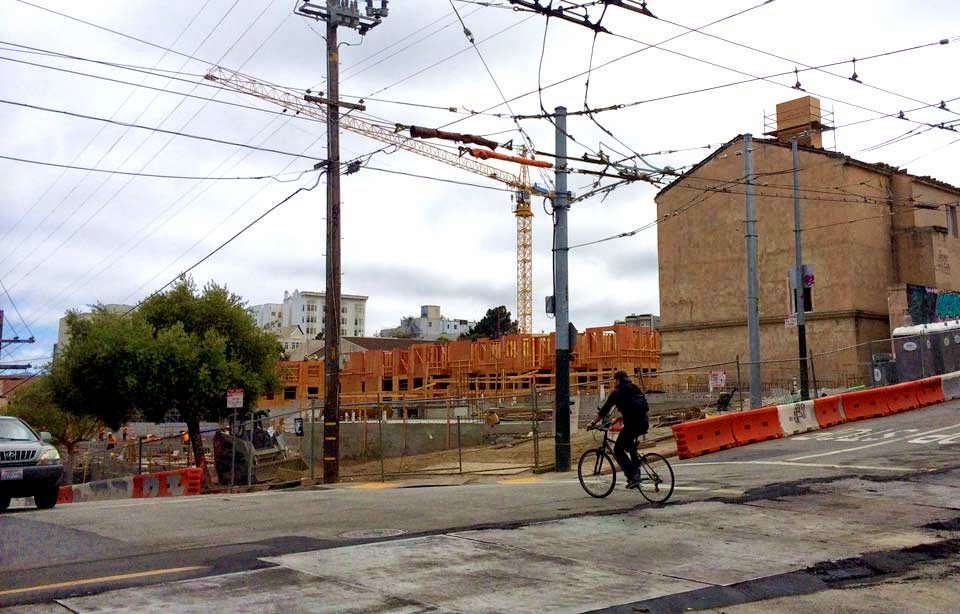 Andrew Dudley / Hoodline
...and here's a rendering of what the completed project will look like: 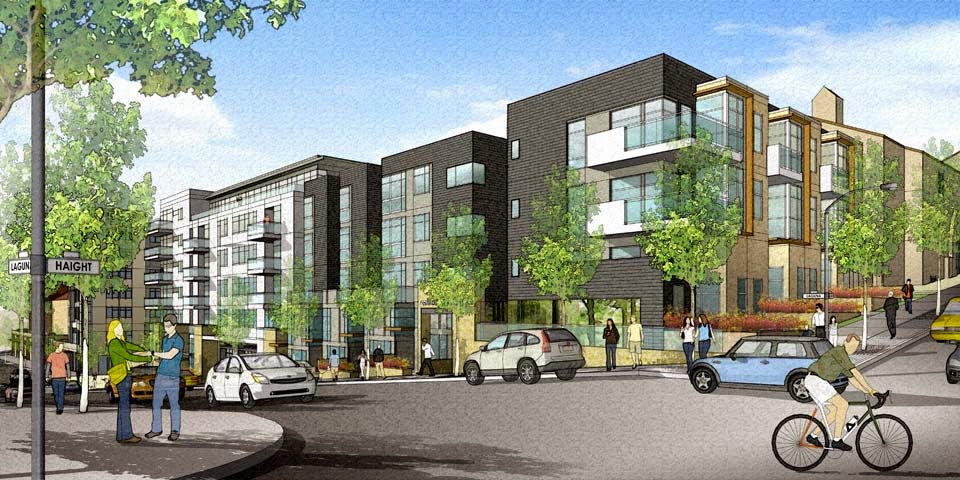 Alta Laguna, LLC
Openhouse / Mercy
The other part of the project will include 110 units of LGBT-friendly senior housing spread across two buildings.  We got some details this week from Ramie Dare, a developer for Mercy Housing, which is partnering with Openhouse on that portion of the development.
Ramie told us that the 110 units of housing have yet to break ground. One of the buildings, at the corner of Hermann and Laguna, will incorporate the renovation of the former U.C. Berkeley campus's Richardson Hall. It will house 40 units, plus offices and a ground floor restaurant or cafe. That building is still in the permitting process. If all goes well, it should break ground by this November, and will be completed about 15 months later.
Here's the corner of Hermann and Laguna now... 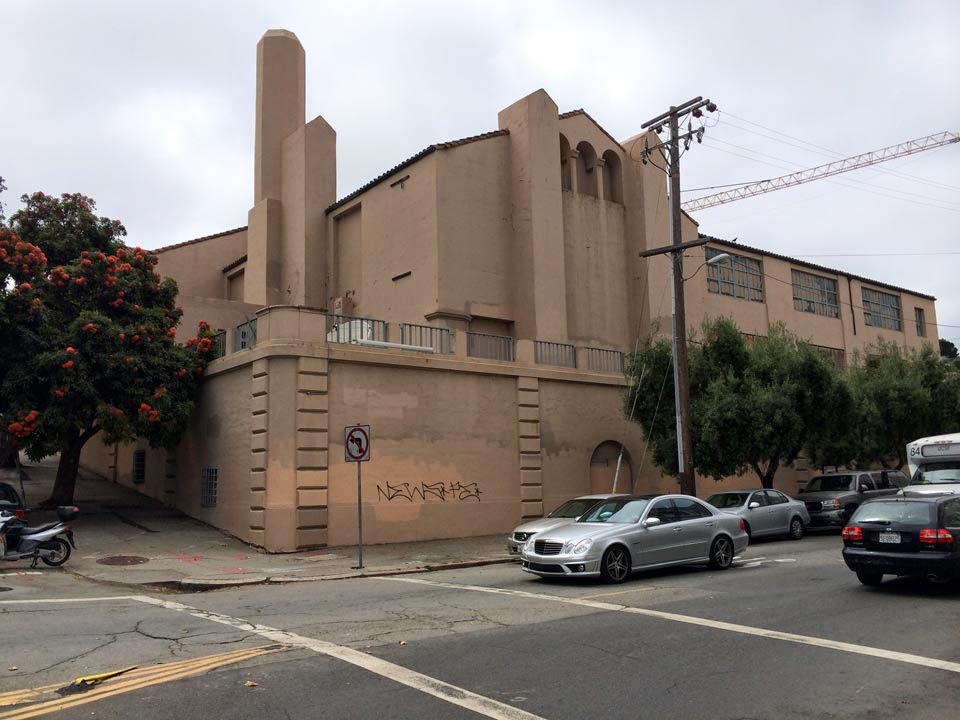 Andrew Dudley / Hoodline
...and here's what it's slated to look like when completed: 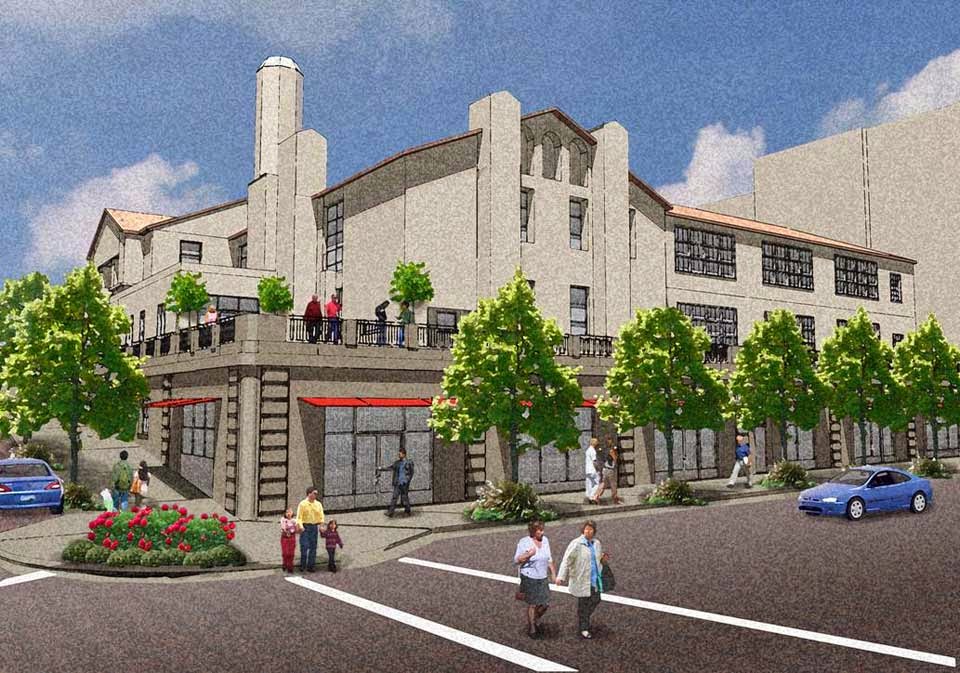 Mercy Housing
As for the remaining 70 units, those will be located in a new building just north, where the parking lot currently sits at Laguna and Waller. Construction on that should begin in the fall of 2016, and will be finished 18-20 months later.
So, there's your update.  While some units should hit the market at the end of next year, the whole project won't be finished until... brace yourself... 2018.
We'll keep an eye on this one as it continues to take shape in the months (and years) ahead.
San FranciscoHayes ValleyLower Haight
Jun 18, 2021