Photo: Jared Schwartz/Hoodline
By Jared Schwartz - Published on July 14, 2014.
San FranciscoHayes Valley
Future's Past, the sculpture by Kate Raudenbush that's been sitting in the middle of Patricia's Green for the past two years, is scheduled to be removed this week.
We spoke to Madeline Behrens-Brigham, co-founder of the Hayes Valley Art Coalition (HVAC), who told us about the removal of Future's Past and what we can expect next in this central location.
"Future's Past by Kate Raudenbush has been at Patricia's Green longer than originally planned," Madeline explained. "Alas, it will be going out next week."
The current plan is to power wash the sculpture today, remove the altar on Tuesday, and then bring in a large crane on Wednesday to lift the entire installation and take it away. The HVAC hopes to have a "bon voyage" ceremony, but is checking with Kate to see when it might fit her schedule. 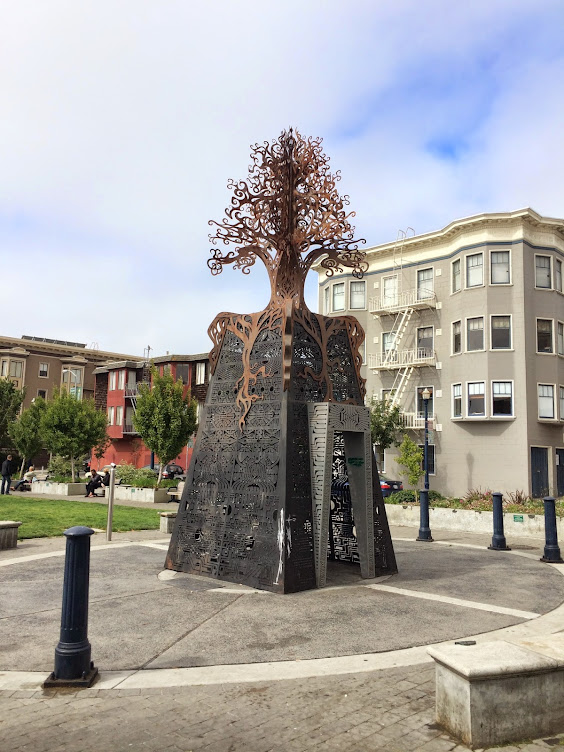 So what should we expect next?
According to Madeline, the HVAC has approved the next installation to be a piece by Mark Baugh-Sasaki. Mark is the same artist who did Adaptations, an arched twig piece that was in this location five years ago but was eventually purchased by the University of San Francisco and installed outside their library.
"Mark has ties to Hayes Valley through his mother who lives here," Madeline said. "He used to have his workshop in her garage until he needed more room for larger installations such as the new one for next month."
The new piece will pay homage to the former Central Freeway that went through this spot in Hayes Valley, along with a future vision for the land and area.
Unfortunately, due to missing the Parks and Rec approval process for July, the sculpture won't get erected until around the last week of August. This will be the first time the space has been empty for this long since 2007.
Once renderings are revealed for the new sculpture, we'll share them so you can get an idea for what to expect next month. Until then, enjoy Future's Past for its last few days in Patricia's Green.
San FranciscoHayes Valley
About 9 hours ago