A Conversation With Aaron And Matt Hulme Of Suppenküche and Biergarten

Photos: Sim Blakeney/Hoodline
By Sim Blakeney - Published on August 28, 2014.
San FranciscoHayes Valley
Aaron and Matthew Hulme are the familiar faces behind the two classic Hayes Valley spots Suppenküche and Biergarten. And, as well as keeping the neighborhood fed and watered, they're also both longtime supporters of the area.
Curious what they've been up to lately, we caught up with the brothers to learn more about them and their experiences in Hayes Valley, and ended up discussing everything from Hayes Valley history to Biergarten's genesis to what's in store for the upcoming Oktoberfest.
Can you tell us a bit about your background?
Aaron: "We were born at the Children’s Hospital on California at Arguello. We lived in North Beach/Russian Hill, so grew up in Washington Square Park. We lived in San Francisco until we were 11, when we moved to LA, where we spent our formative years. We moved back here later on."
What was Hayes Valley like back then?
Aaron: "Hayes Valley has played a major part of the development of San Francisco, although it hasn’t always been known by that name. If you had said “Hayes Valley” to us when we were 15, we wouldn’t have known what you were talking about.
"This was a discarded neighborhood. But it was in the center of San Francisco, so it has always had an immediate feel to it, and it has always been someone’s home.
"Before the freeway, there was a steam engine which left Market at Hayes Street and came up into Hayes Valley, which, at that time, was known as Hayes’ Park. It was named after Colonel Hayes who acquired the land via squatter’s rights. Colonel Hayes initially started to sell plots as farm land. However, because of the dunes it wasn’t farmable, so it was split up and sold as residential land.
"The steam train was eventually pulled by horses, and then came the cable cars. And, in the 1950s, the freeway was compelled to stop here. It was decided that ringing US cities with roads was ruining them, as they cut everybody off from rest of the world. So, the freeway stopped here in Hayes Valley —and obliterated the neighborhood.
"We came and lived here when the freeway was here, and we lived across the road from Suppenküche when they took it down."
How did you come to be involved with Suppenküche?
Aaron: "Suppenküche was started by Fabrizio Wiest, with Thomas Klausmann, in 1993. Wiest grew up in a castle that his family owned near Munich. His grandfather had run a brewery at the castle, so Wiest felt comfortable starting the business in 1993.
"Suppenküche was here before the freeway came down. But, it was purely an accident that Wiest put it here: a 'symphony of coincidence.' It could be argued that it was due to Suppenküche—along with other places around at the time like Zonal—that Hayes Valley was such an underground, awesome place to hang out.
"Suppenküche was one of first places in San Francisco where you had to sit with other people. That was not a common thing back then. The idea behind Suppenküche was that it was to be a safe place. It did not matter where you came from, you could come and hang out and be anyone.
"In 2001, we were living across the street from Suppenküche. We had been going there for years, since it opened. Wiest knew our family and friends. Matt (who is also a graphic designer) started doing the designs for the Suppenküche anniversary parties, including the t-shirts, coasters and menus. And, in around 2002, when Wiest needed a manager for Suppenküche, I stepped in. We had a bunch of ideas for Suppenküche. Wiest let us do what we wanted."
How did Biergarten come about?
Matt: "Every Wirtshäus (bar) in Germany has a beer garden attached to it. So, it seemed like the right thing to do was to extend Suppenküche and make a beer garden."
Aaron: "We were lucky to get the lot for Biergarten. It was a magical moment in San Francisco history, when we had the Redevelopment Agency. It was pre-urban infill. These lots were left vacant for years and needed to be used. But, because the economy was what it was (in 2008), no one was willing to gamble on interim use.
"It was the right time, the right place and we just wanted to prove it could work—that a beer garden could exist in a city like this. Just like Suppenküche, we wanted to provide a place where it doesn’t matter who you are or where you come from." 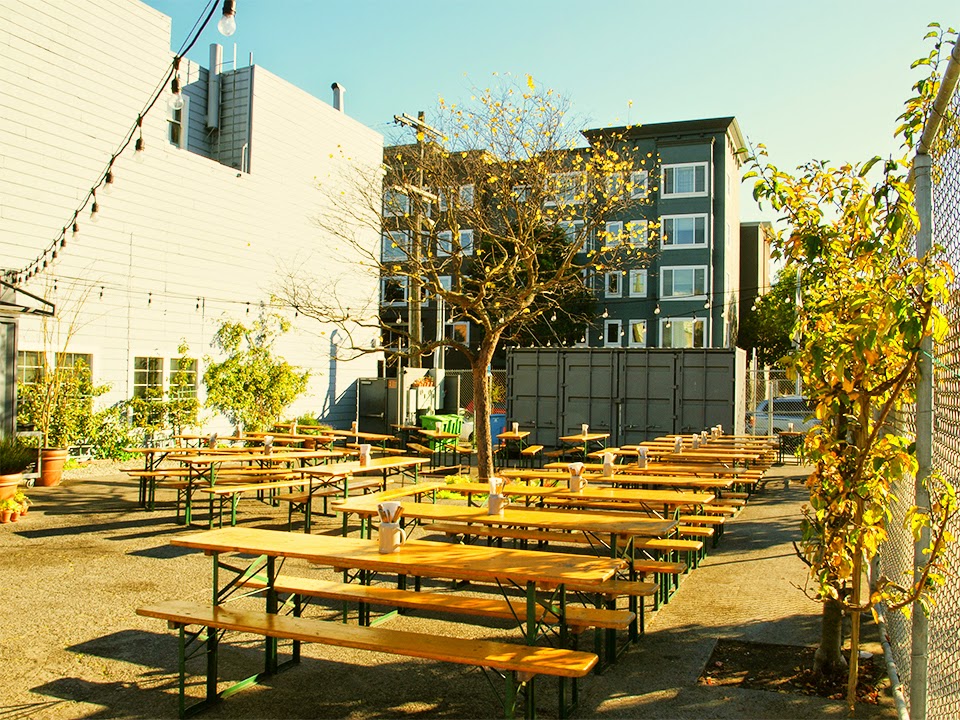 Matt: "A lot of people here rent apartments, and don’t have backyards."
Aaron: "They come to Biergarten to hang out. They can sit here for as long as they like."
Matt: "It often feels like this is one big house party."
Aaron: "In fact, a large percentage of what we provide, the customers bring with them when they walk in the door. They know how to have a good time. We don’t get in their way. We want to provide a place where people can come together and rediscover what it means to be on Earth. We never thought we would be doing this, but now cannot imagine doing anything else."
What other involvement do you have in the neighborhood?
Aaron: "I'm a Member-at-Large of Hayes Valley Neighborhood Association (HVNA), responsible for making sure their fundraisers go well, providing food and space for them. We've held a big Fire Brunch every year [for the past four years] as a way to give back to the neighborhood and the HVNA. That is our main fundraising drive. We provide the venue, the staff and all the food, with all the proceeds going to the HVNA. We will keep doing this for as long as we can."
What's next for Hayes Valley?
Aaron: "Everyone should slow down and enjoy what we’ve got. There is enough already in the hopper. Let the people here get a bit older and learn from the mistakes they are making. Not everyone is going to get a shot [to live here]. So, relax. There are a lot more neighborhoods in San Francisco.
"It’s been real fun, but we don’t want to sustain, we want to thrive—to transcend this and become the future. So, genuine reflection has to take place, like it always has in Hayes Valley.
"San Francisco is a special city and Hayes Valley is special place in the city. It is in the center, and one of the first places people decided to live. We need to let all our new neighbors know that we love them too, and that we will have to support each other. This is not Disneyland, it’s someone’s home."
On a different note, how do you pick your beers?
Matt: "We have a lot of experience with German beers. We go to Germany, go to all the breweries and test them all. There are also certain Pilsners and Helles that we know we like more than others.  Right now, we are in love with Andechs. All the brewers there are monks, and pilgrims still go to the monastery attached to the brewery."
Do you have any plans for this year’s Oktoberfest?
Aaron: "We parallel the festivities in Munich, so we will start at noon on September 20th, when we will tap a keg and begin the festivities. It will end on the first Sunday in October. The first day is always the biggest.
"We'll have speciality beers, including as many Oktoberfest beers as possible. In fact, we will have more than in Munich, where you can only serve beers brewed in the city during Oktoberfest. We usually have a theme, but it is still to be determined. And we will probably have t-shirts, because everyone likes them."
Many thanks to the Hulme brothers for sitting down to talk with us, and don't forget to mark your calendars for September 20th when the Oktoberfest beers will start flowing.
San FranciscoHayes Valley
About 20 hours ago