83-year-old Howard Johnson has been a San Francisco crossing guard for 14 years, and has spent the last four of those years helping out at McKinley Elementary in Duboce Triangle. A Korean War vet, former model and doorman, and longtime foster parent, Johnson performs his crossing guard duties with an unusual sense of style and the energy and exuberance of a man many years younger.

At his age, you might expect Johnson to want to relax and take it easy, but he seems to enjoy getting out of the house every school day and helping people to cross the street safely. You can always see him laughing and joking with kids and parents, but don’t be mistaken: he takes his job seriously.

On Walk to School Day a couple weeks ago, we took a few minutes to get to know the stylish crossing guard a little better and find out what about his time in the military, how he got interested in fashion, and why he loves his crossing guard gig. 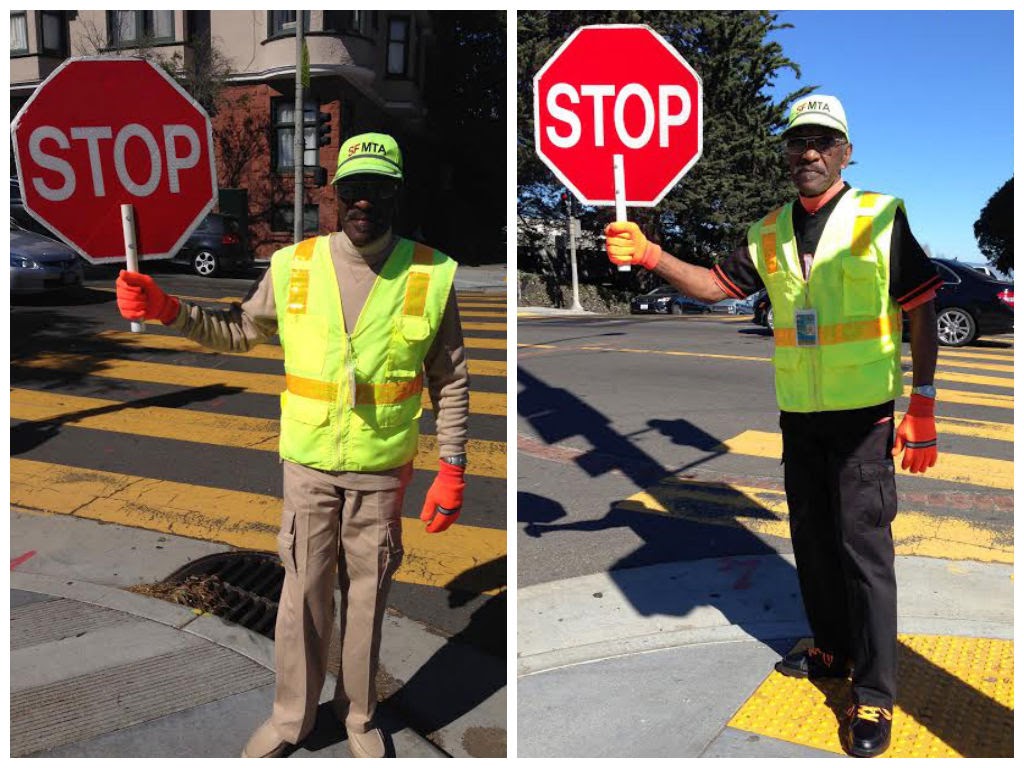 How long have you been in San Francisco?

What brought you to SF and where do you live in the city now?

My family, they all moved out here. I was the only one back there. Now I’m the only one here. They’ve all passed. I live at Eddy/Steiner in the Western Addition.

What did you do before you were a crossing guard?

That’s a good question. I was a doorman at a hotel on Sacramento/Clay.

What inspires you to be a crossing guard?

I couldn’t sit at home and do nothing. I didn’t want to work eight hours in the morning. So I just found me a job for four hours.

What is it about being a crossing guard that you like so much?

Staying busy, getting out of the house. I’m a foster parent. My wife and I, we’ve adopted one and right now we’ve got a girl, a Filipino baby. We’ve had her since she was two days old. And she's 10 months old now.

If there was one thing that you’d suggest to people to stay safe crossing the street, what would it be?

Watch me. Look at me and I’ll tell them when to go, and when not to go. If I hold my hand up like this that means stay there, don’t walk. But a lot of them walk. You know the light’ll be yellow they think they can make it from there right on across. But not my students, not my mothers and children. These are just other people that I help cross the street.

Do you find this intersection to be dangerous or safe?

How much longer do you think you’ll be a crossing guard?

I don’t know, cause you know what? I don’t wanna give it up. I enjoy myself here. I have fun with the people and they’re nice to me and I get a chance to talk to them, joke with them and they talk and joke with me.

How long have you been married? Do you have any children?

Been married 21 years. Yeah, I have children by a previous family. I have a daughter and son still in St. Louis and I have some grandkids and some great grandkids back there.

How many foster children have you had over the years?

We’ve been doing this 12 years, so I’d say about 12. You only keep them for a year until they find an adopter.

Have you always been such a fashionable dresser?

I used to model for Howard’s Clothing Store when it used to be on Market. I was a model for about three or four years. And I did a lot of shows for them.

I've always have been a dresser since ever since I got out of the service. I just love clothes. One thing I promised myself when I was coming up, I’ll tell you this, my family was poor and I was poor and I had to wear shoes with holes in them and put paper in them and I promised myself once I get home and get grown that’ll never happen to me. And I’ve got more shoes and tennis shoes than I can wear.

What do you look for in good clothes? How would you describe your sense of style?

Quality, how they fit. Not the price. Being a model I know how to put things together to make it look like they different but they’re not different. I just put different things with them to make them look different. When we were modeling we had to learn the color scheme and what looks good with what.

A lot of people don’t like black and tan but if you put black and tan together it’s outstanding. Some people like a lot of black. Some people like grey. Some people take black and grey and put them together and make another outfit out of it. When I worked for the government I worked in the office so I wore a suit and tie all the time. So I had to learn to buy quantity instead of quality. Put the quantity together to make it look like quality. Take a shirt and a different tie and a hanky. You buy the hankies with five different colors on them and they’ll match any tie that you put on them colorwise. That’s putting it together.

How has your style changed over the years?

Each year the styles change, but if you keep going holding on to your clothes that style comes back. Remember those big lapel suits? I’ve got four of those. That style is coming back. Double breasted is coming back.

At this point in the conversation we take a break so Johnson can help people cross the street. While he’s standing in the crosswalk, a fast-moving car makes a right on to Castro Street from 14th and zips too close to people in the crosswalk. Luckily no one was hurt. Johnson’s response: “In a hurry!”

Which branch of the service were you in and how long did you serve?

Three years in the Airborne in Korea from 1950 to 1953. Ain’t forgot that. And I found out when he and I (Johnson points across the street to Courtney Produce at 101 Castro St.) was having a conversation, the man that owns the store, him and I were in Korea at the same time. We didn’t know each other but we was in there. I told him I was there from 50-53, he said ‘So was I!’ But we didn’t meet. He was in the infantry and I was in the 4.2 Mortar Company. That’s the big mortar. It sits in front of the 5-0-5. Then you’ve got the 80 that sits in front of us. You’ve got the 80 mortar, the 4.2 mortar and then you’ve got the artillery.

What do you think of the Giants' chances in the playoffs? Do you think they’re going to beat the Cardinals?

You know I can’t decide on that. St Louis is my home and I’m living in San Francisco. I’m not betting on nobody. And I’m not going to make no mistake saying who’s going to win. I’m just going for the winner.

Luckily, Johnson can now safely say he's rooting for the Giants in the World Series.

San FranciscoCastroDuboce Triangle
About 20 hours ago