Fell Swoop: All About The Fell And Shrader Bike Signal

Have you ever heard of the “Shrader Valve?” If you’re a bike commuter, you may ride it daily. And if you’re a resident with a car who lives north of the Panhandle, you may negotiate this intersection all the time. But several years after its installation, cyclists and drivers still don't quite know what to make of the signal.

But first, some background. The intersection of Fell and Shrader streets is the site of the first bike-specific traffic signal in San Francisco. It was named the “Shrader Valve” by SFMTA planner Oliver Gajda, who also coined the term "sharrow" (to describe the bike arrows painted on streets around the city).

Installed in 2008, the bike light aims to create a safe exit for cyclists riding west along the Panhandle. Connecting the Wiggle to Golden Gate Park, the Panhandle sees a large number of commuting cyclists daily, making a clean transition from the Panhandle to the park important for safety.

The installation of the Valve followed 2003 Rec and Parks decision to widen the Panhandle mixed-use path. Formerly just eight feet wide, the plan resulted in the 12-foot wide-path we have today.

In 2010, the Shrader Valve got a much-needed upgrade. In September of that year, the SFMTA added a "no right turn" signal for southbound Schrader vehicles, hoping to eliminate the issue of both bikes and drivers turning onto Fell Street in the same direction at the same time.

To counteract potential collisions, the intersection is carefully timed. From the Panhandle side, cyclists have a dual phase to pay attention to. First, an exclusive left-turn arrow appears, allowing them to make a protected left-hand turn onto Fell Street without oncoming traffic from Shrader cutting across their path. This phase lasts 13 seconds.

The second phase is a green light (Update: contrary to what we were initially told by the SFMTA, there currently isn't a left-turn red arrow for cyclists. After the left arrow goes from green to yellow, it turns off, leaving just a green bike, which means bikes can still go left but they don’t have a protected movement during that time.) This phase also lasts 13 seconds.

Leah Shahum, Executive Director of the San Francisco Bicycle Coalition, praised the presence of the light.

"The Shrader Valve is a great example of a relatively small yet innovative upgrade to one of the city's busiest bike routes, making thousands of people's rides more smooth and comfortable each day ... There are hundreds more of these relatively 'quick fixes' that can and should be addressed to truly connect the city with inviting bike routes."

Ben Jose from SFMTA told us that "improvements like these reduce conflict between people biking and people driving by increasing the level of visibility, denoting a clear right-of-way and facilitating eye contact and awareness with other modes of transportation."

But as demonstrated in the below photos, taken recently by cyclist Peter Yip, the intersection is still causing some confusion.

From the Panhandle side of the intersection, it's mostly obvious what to do. A green bike symbol light (pictured below) means yes, you can turn left or go straight. After this phase, the light will turn to a green ball combined with a red arrow, meaning cyclists can only go straight. 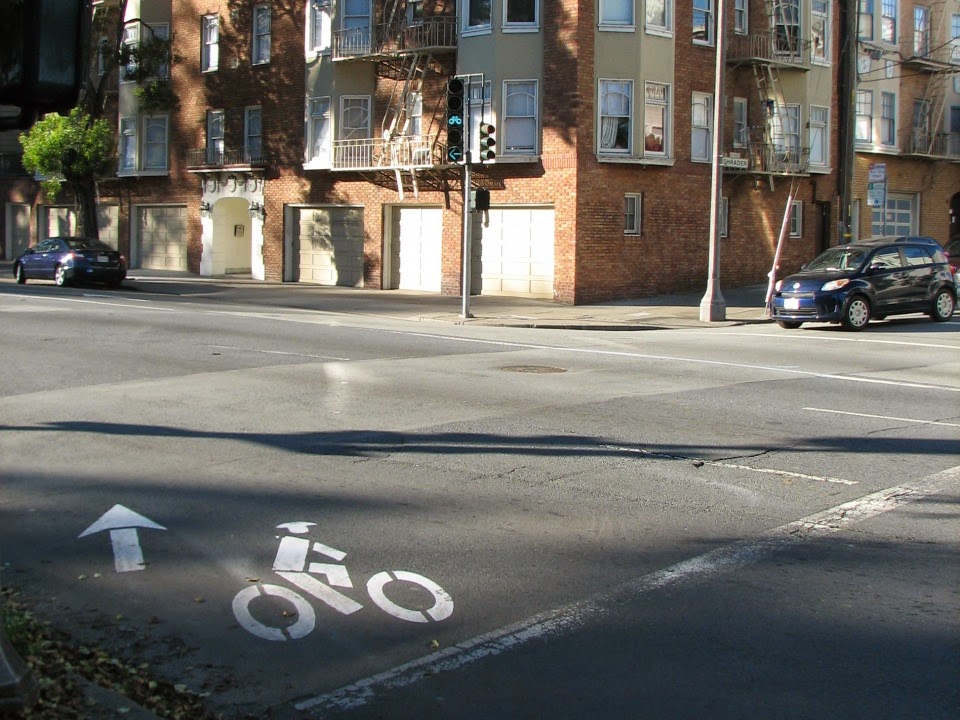 On the other side of the street, however, cars like the one below are still getting confused. A normal set of lights is installed to let drivers heading south on Shrader Street know when it’s okay to turn right onto Fell. An additional arrow light has also been installed, in theory to let drivers know when cyclists are coming into the intersection from the Panhandle. As in the photo below, which shows a car turning right against a "no right turn" light and red arrow, some drivers still don't understand how to properly and legally handle the intersection. 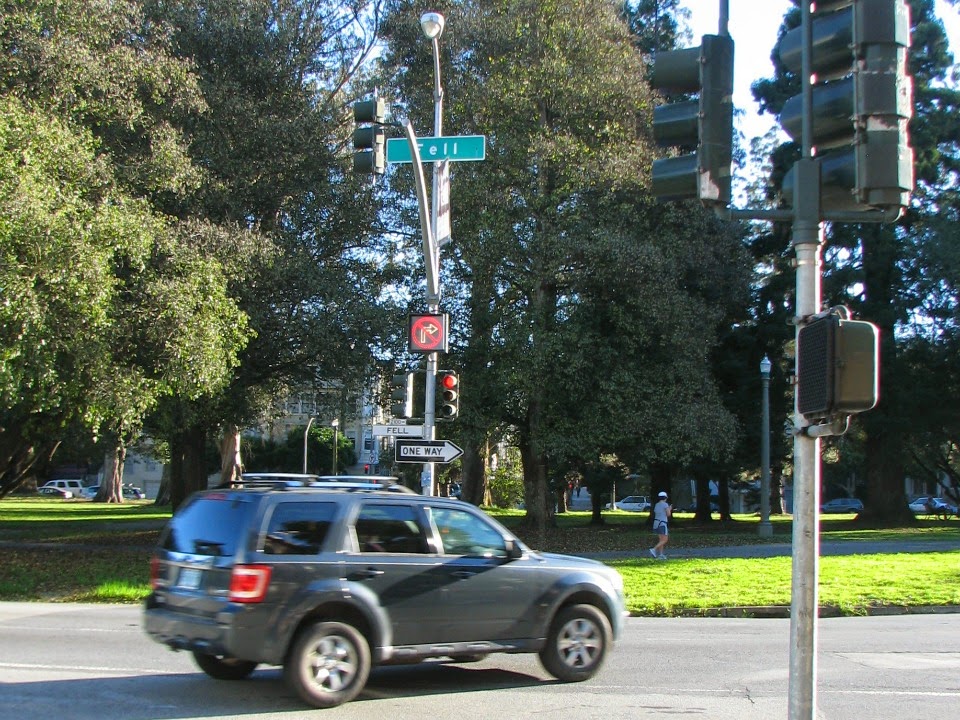 The confusion about who goes when means that some cyclists avoid the intersection altogether. Some cyclists opt for the Shrader Valve, even if the bike light is currently red, requiring them to stop before crossing Fell. Others go straight onwards to the large intersection at John F. Kennedy Drive and Stanyan Street, choosing to wait out the light before proceeding through the middle of the intersection to Golden Gate Park.

The SFMTA is continuing to create separate bicycle and vehicle movements at intersections when appropriate. One nearby example is Fell and Masonic, where there’s a bike-only signal and a separate left-turn signal for vehicles, allowing both to pass through the same space more safely than before.

Have you interacted with the Shrader Valve by bike or car? How does it work for you?