Since reporting on the Hayes Valley Samovar Tea Lounge closure in October, we’ve been waiting for an update on the Page and Laguna Street space. At the time, owner Jessie Jacobs said he planned to reopen the space with a similar concept to Samovar's sleek new sister spot on Valencia Street.

Though Jacobs hoped to reopen, the location has been up for rent for several months. A Craigslist listing for the space includes a handful of photos, lists square footage and local nearby vendors, and notes that “this great corner retail space has many new residential developments popping up around it.”

For the past several weeks, a handwritten note posted on the door read:

"Dear Tea Lovers, We are open for business! Our hours are limited as we update our menu. Please email us to schedule a VIP tea tasting, and to find our when our doors are open. Hours vary daily. Thank you!" 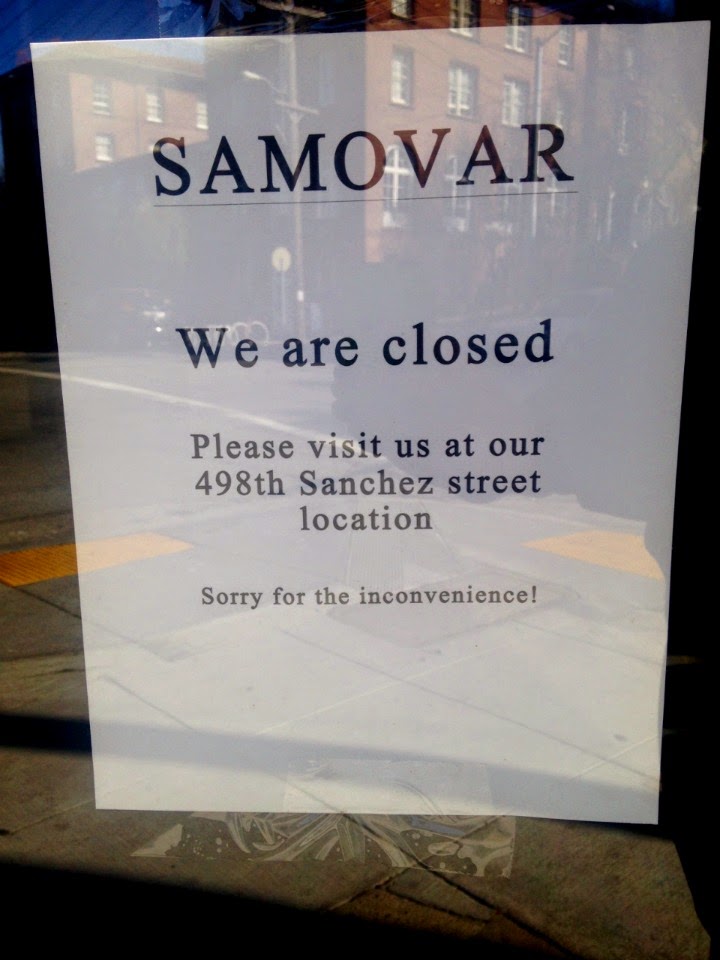 We reached out to Jacobs, who says he’s exploring new options for the space including a pop-up concept, or just handing it over to a new business entirely.

Despite his stated interest in finding prospective new tenants, he emphasized that no one has actually committed to the location and says he’ll only “relinquish the space to the right, passionate and skilled, local entrepreneur.” No word on who that entrepreneur might be, but a few potential businesses,  including coffee, sushi and pizza, have already approached Jacobs about the space.

Prior to this Samovar's closing for a proposed remodel, all three Samovar Tea Lounge applied for a beer and wine license to expand their menu. As we reported just a few weeks ago, the Castro's Samovar is close to getting the updated alcohol-infused menu, which will include a unique menu of tea-infused drinks like a schizandra berry mimosa and a lapsang souchang smokey bloody mary.