Photo: Miguel Vaca
By Nuala Sawyer - Published on January 04, 2015.
San Francisco
Police districts covering central San Francisco neighborhoods are about to get redrawn, based on draft plans that the police department is beginning to share publicly. While redistricting might not seem like a huge deal at first glance—after all, police will still be covering the whole city—the details behind district borders, crime rates, and allocation of officers affect how policing happens near you.
Not every police district in the city will be affected, but a few you may recognize are changing substantially. The Northern District will expand west from Steiner to Divisadero, the portion of Park District north of Fulton will join Richmond, and the Tenderloin border will expand south from Market to Mission Street and then east to 3rd Street.
The department's goal is to provide stronger and more organized policing across neighborhoods and along main streets, particularly on Market and in the Tenderloin.
But there's already some disagreement surfacing about the changes.
And there will be a lot more discussion starting this month. The city officially reviewed and began asking for public comment during a December 10 police commission that looked at the draft. That meeting marked the start of a 90-day public comment period.
To get community feedback between now and the finalization stage beginning on March 10, the SFPD is relying on affected police districts to hold their own public meetings (details on those, further down).
The process has not been that transparent so far. It's been nearly a month into the public comment phase, for example, but the department has yet to publish maps of the new districts (a police spokesperson tells us they'll be added to the SFPD website soon).
In the meantime, Hoodline readers, you can get an early peek at the new map via the video screenshots we took from the presentation to the city police commission in December. If you squint hard enough, you can see that the new lines are in light blue, the old lines are in red, and unchanged lines are in purple.
[Update: Captain Raj Vaswani of Park Station has kindly sent us much clearer official maps. We've swapped them in, below.] 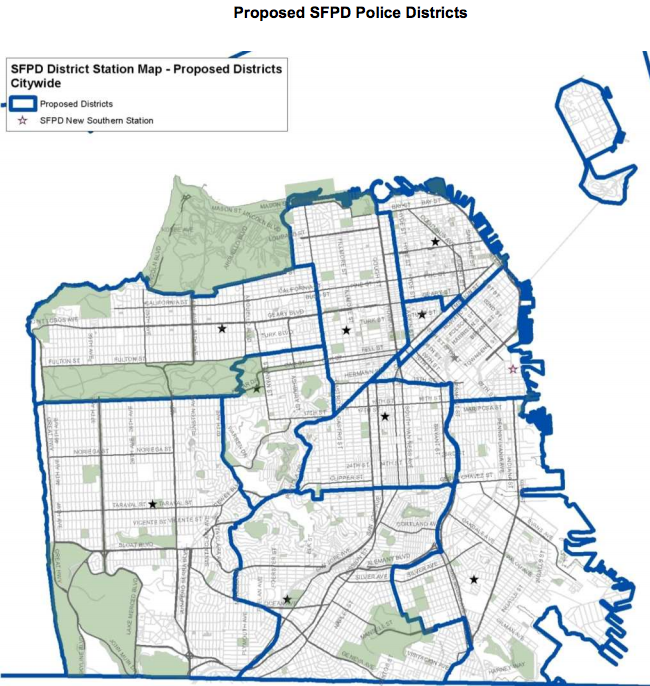 As a reminder, the current SFPD districts are organized as follows: 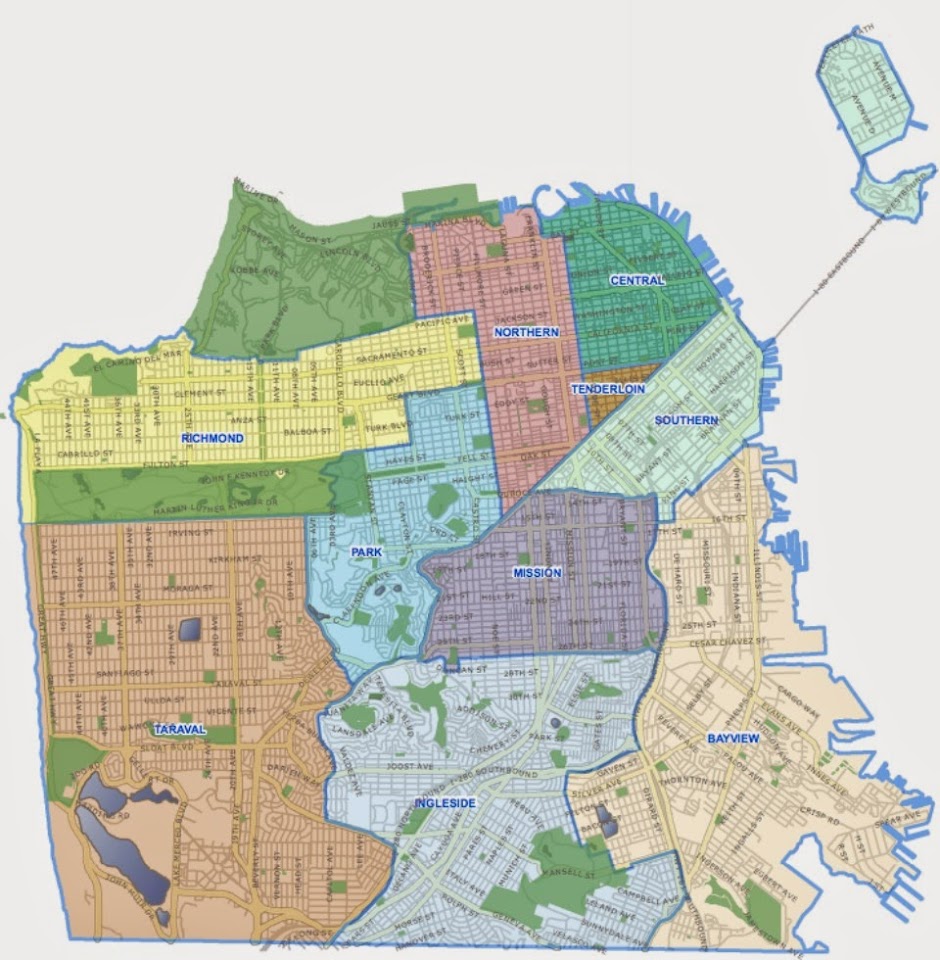 We also  gleaned a big change from the video, that's not visible in these already-blurry images. As part of the new plan, one police station will cover both sides of a main street on district dividing lines. Up until this point, stations have often split responsibilities up the middle of border streets, complicating coverage efforts on either side.
Here's more from police chief Greg Suhr, as we've transcribed from the video.
“[T]he lines are cleaner on the new maps. There’s not as many, for lack of a better word, nooks and crannies – not as many pocket spots that kinda get lost in the maps. Northern [District] is a good example. Just having it be a straight line shot of Divisadero, which changes to Castro and goes to Market, point A to point B. Everybody knows that that’s pretty much a straight line. [B]oth sides of Divisadero are the responsibility of Northern, just like both sides of Mission Street are the responsibility of Southern and both sides of Larkin Street are the responsibility of Tenderloin."
And for concerned residents on some main streets in Hoodline neighborhoods, here's more detail from Suhr about a single station owning a border street.
"[T]he problem was that the people that live on Larkin Street and on Divisadero and it used to be on Market Street, is that one side of the street would belong to one station, and the other side of the street would belong to the other station, and that just created problems. And so we just thought it was easier to make the division on major boulevards and major streets as straight a shot as possible, and then on those borders, declaring that street as belonging to one station or another.”
The redistricting, in case you're not familiar, is happening for a few reasons. Most prominently, the department is trying to rebalance its force to account for internal changes. The SFPD command center and its Southern (SoMa-focused) District will be moving south  from its hulking Bryant Street location to a gleaming new facility in the newly-built Mission Bay neighborhood. This physically locates more officers further away from Market and downtown, and also explains why the Southern District is edging south to 16th Street as part of the redistricting. But the plan, led by the SFPD and other city departments in conjunction with the outside consulting firm Public Safety Strategies Group, was also based on lots of research accumulated over previous years. It is broadly trying to make sure the city is calibrating correctly for crime rates and demographics in the middle of a hectic era.
Tenderloin Controversy
The Tenderloin footprint expansion accounts for the new command location, with more officers expected to join it to handle the load. While the  neighborhood has been designated an official police district for years, it first came to be as a smaller special task force in 1991, designed to resolve the high crime rates in the area. It has evolved into a formal police district since then, but has still had fewer dedicated officers than other districts.
With the redistricting, Suhr says the Tenderloin Station will eventually absorb the portion of Southern District officers currently focused on patrolling Market Street, and create room for around 24 new officers as well. But covering more geography is also raising questions.
Writing in Beyond Chron, Karin Drucker of the Central City SRO Collaborative sees a problem with encompassing the Westfield Mall and the forthcoming Market Street Place between 5th and 6th. Basically, the station will have to spend more time fighting  everpresent shoplifters versus dealing with the more complex problems to the west.
"Tenderloin officers are adept at coping with homelessness, mental illness, violence, and narcotics—often on foot. That’s where their energies are best spent. The neighborhood has also built a tight relationship with its captain, which has engendered community-oriented policing strategies that will inevitably suffer when the district’s aegis expands to include the very real—but very different—interests of downtown offices and main-stream retail on Market between 3rd and 5th streets. Bottom line: the eastern boundary of the Tenderloin district should end at 5th Street."
Drucker instead advocates for expanding Tenderloin over to Polk and covering Civic Center and the lower part of Polk Gulch. This would encompass more of the same population and history. A few local residents showed up during a public comments portion of the meeting last month, and advocated for similar growth. One related the problem of a Honduran crack-cocaine gang flitting over to Van Ness to avoid Tenderloin enforcement, and asked for the district to reach as far as the western edge of 101.
To recap, the newly-proposed district would extend south of Market to Mission Street, and would expand east to west from South Van Ness to 3rd Street. 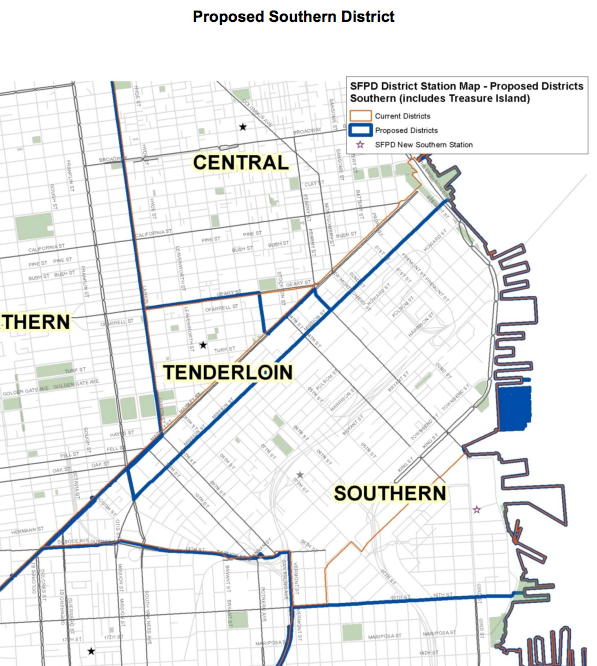 The current boundaries cover a neat triangular area. Larkin's on the west, Market is to the south, and Geary is up top. In addition to the new plan's expansions, Central District would absorb the triangle's northeast corner. 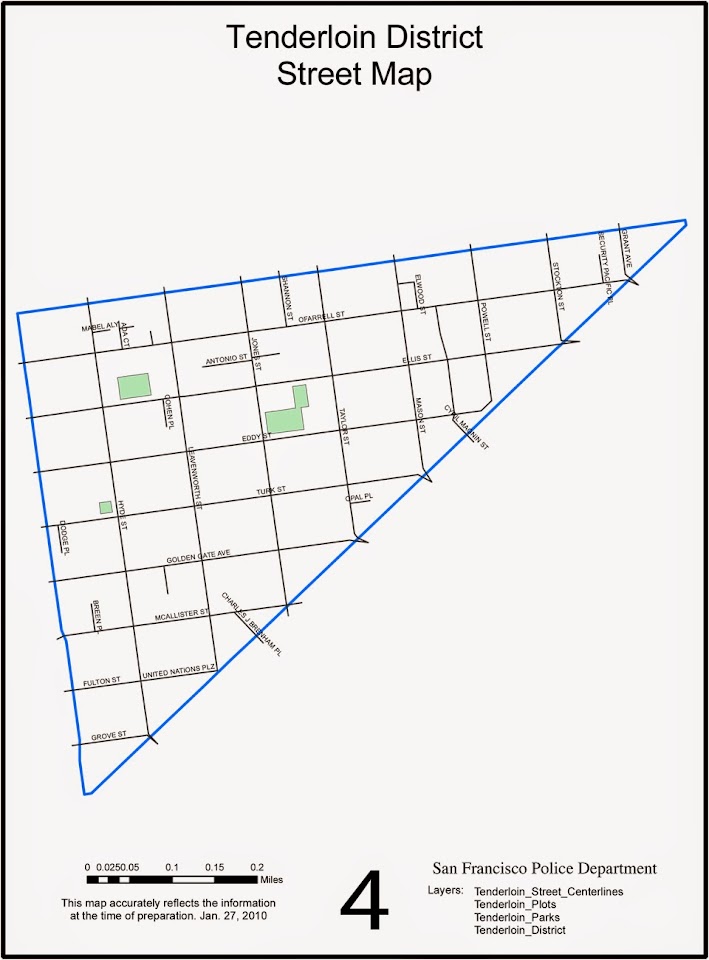 A community meeting on changes to the Tenderloin district will be held on January 28th at 6pm, location TBD.
Park and Northern Redistricting
Park Station's districts will also undergo some heavy changes. Under the proposed redistricting, Park District will now only extend eastward to Divisadero Street and north to Fulton. This would effectively cut out much of Western Addition from Park Station and reallocating it to Northern Station. 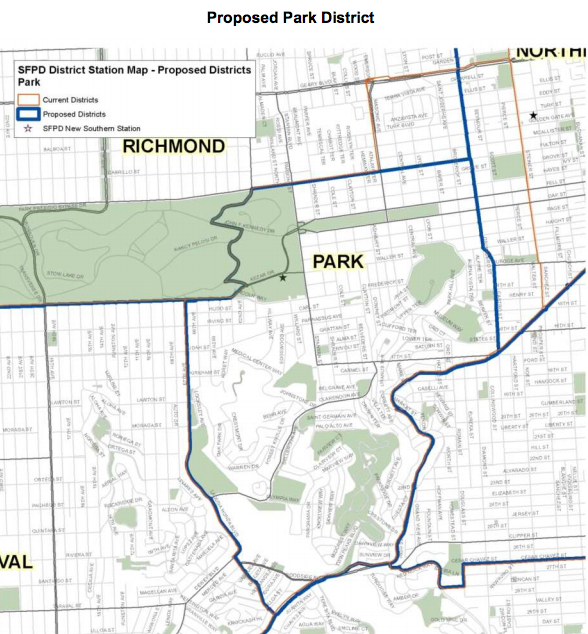 The meeting video we got the above screenshot from didn't include a closer view of Park redistricting, but you can examine the current boundaries below: 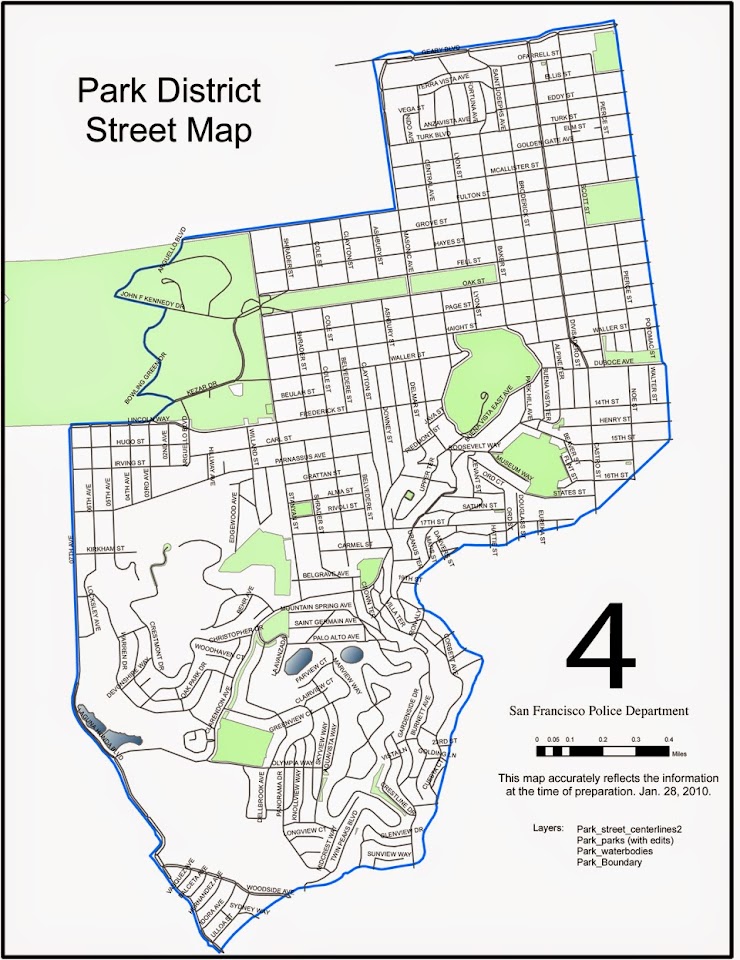 And so, Northern Station's geographical coverage will now be larger than before, encompassing almost all of the historic Western Addition neighborhoods (depending on who you ask). 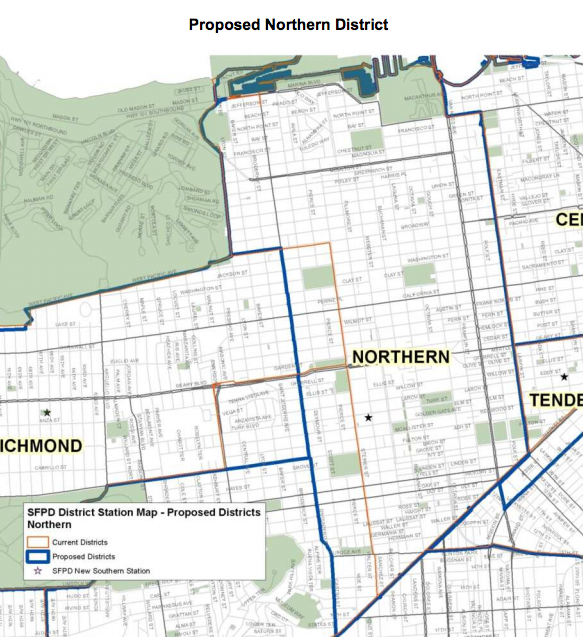 The current district boundaries already cover much of Western Addition, as well as lower Pacific Heights and other neighborhoods up through the Marina. 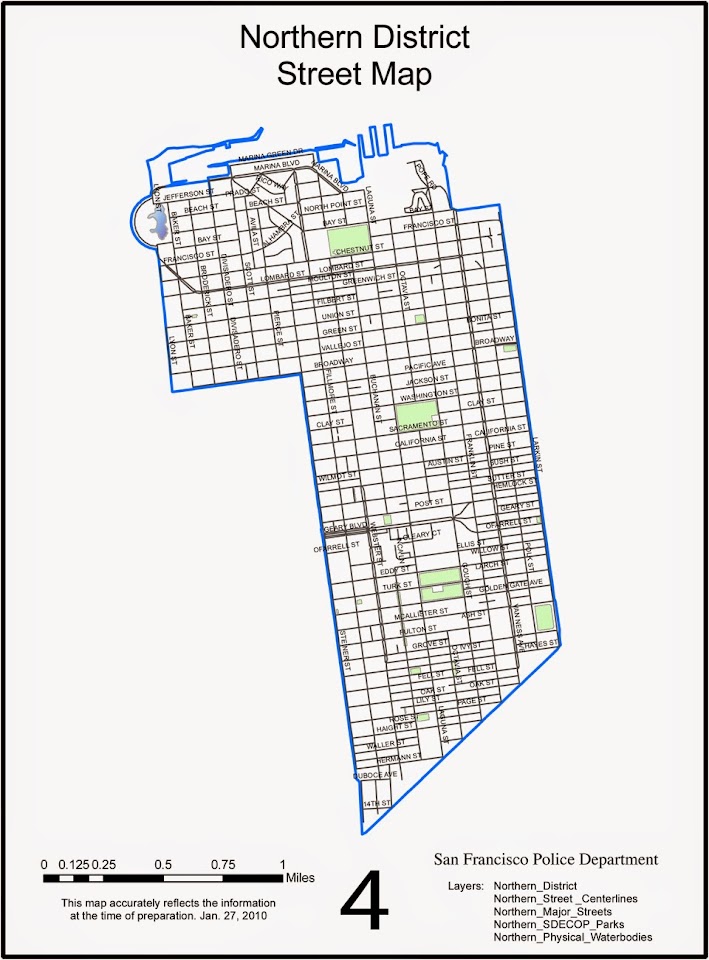 Northern Station and Park Station will be co-hosting a meeting on February 11th at 6pm in their station's community room, located at 1125 Fillmore Street.
We'll keep you posted on this meeting, as well as the Tenderloin one on January 28.
And we'll leave you with one final thought, from Chief Suhr. During the meeting last month, he was questioned closely by police commission members about the process through which the new plan was drafted, and what the changes might mean for the many communities based around central San Francisco.
"I want to stress to the public, both here and on television, that this map is very much in pencil," he said during the December meeting. "Now we have a map that everybody that pretty much works these districts [has had input on] and with all the information put in, there can be an explanation.”
So, the department and the commission want to hear from you. If you feel strongly about what's happening, watch the video, contact your (current) station, and go to the upcoming district meeting near you.
San Francisco
About 10 hours ago