1500 McAllister St., one of the buildings damaged in the fire which raged near Alamo Square last month, has been purchased by SF real estate mogul Russell Flynn. The fire affected approximately 17 units and displacing 25 residents, including two families with small children, and the future remains uncertain for the displaced residents, most of whom have not yet been allowed back into their apartments to assess the damage or gather belongings.

Last night, a community meeting was held at The Independent for displaced residents of the building. Most in attendance were wearing new shoes and clothes purchased or donated in the aftermath of the fire, which burned at the corner of McAllister and Scott on January 31st.

Although a sign posted outside the damaged building states that all damage was interior to the building and not structural, one tenant reported that the property manager told her a sewer leak compounded the damage, and that all her belongings were destroyed. "I'm worried things are happening behind a curtain," she said. And the general tone of the meeting implied just that—that few had any idea what to do next, and how to begin the process of accessing their former apartments.

Representatives from the Housing Rights Committee, the San Francisco Tenant's Union, and District 5 Supervisor London Breed's office were present to offer advice on navigating insurance policies and the extremely tough housing market. Tim Careher, whose house burned down in 2011, offered words of wisdom to those who had been displaced. "It's a process. It's going to take a lot of time," he said. "You get battle-tested, but you figure it out."

But the residents of 1500 McAllister (just one of three buildings affected by the fire), have more than just lost belongings and insurance policies to deal with. A year and a half ago the building's owner, William Hahn, passed away. He'd purchased the building in the 1970s, and was by one resident's account, "an incredible landlord who cared about the building and his tenants." Unfortunately Hahn had no heirs, and so after his death the building was handed over to J.J. Panzer from Real Management Company, who'd handled the building management. The building was put on the market.

On January 14th of this year, a probate was put on 1500 McAllister St. This is the first step to managing the distribution of a deceased person's estate, and in this case the interested party was Russell Flynn, a San Francisco real estate figure who owns over 3,500 units in San Francisco. Flynn may be known to Hoodline readers as the owner of 493 Haight Street, located on the corner on Haight and Fillmore. That same building burned down in a fiery blaze in 2011, and took two years to rebuild.

According to a representative from the Housing Rights Committee, it's not uncommon for construction post-fire to be delayed. The longer landlords hold out on rebuilding units, the more insurance money they can claim, and the more likely it is that displaced tenants won't return, allowing them to rent their units out at market rate. In 2013, a wrongful eviction complaint was filed by a tenant of 493 Haight Street against Russell Flynn. The case was settled out of court.

Though its unclear how the McAllister building's new owner will approach residents displaced from last month's fire, Flynn gave 493 Haight tenants $1,000 each for relocation support. In addition, he offered many buyouts, so that they wouldn't return to the building once it was renovated. Hoodline commenter Alexandra Bogorad is one of the Haight tenants who took the payout, opting to take her chances with the rental market instead of waiting for her old apartment. "I lived in that building pre-fire for over 4 years," she wrote. "As far as I know, most people took the buyout money, I did as well. I did have an option to move back in after they are done restoring the building at the same rate, but I needed the money after losing everything in the fire."

In a bizarre coincidence, it appears that Flynn's company visited the building at 1500 McAllister Street the day before last month's fire -- and may have in fact visited one of the units from which the fire is believed to have originated. Tenant Justin Meyerowitz, sent us a photo of a Notice To Enter Dwelling Unit sign, stating that the bottom two units, 1500A and 1500B McAllister Street, were to be shown to the prospective buyer. 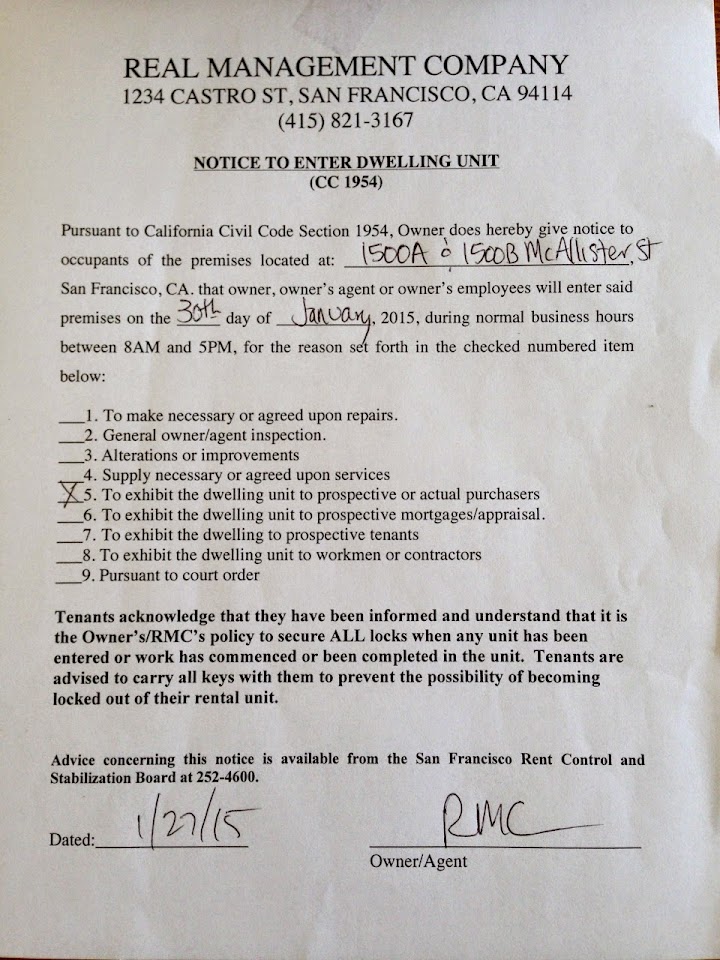 The fire's cause hasn't been officially released yet, though SFFD Assistant Fire Chief Bob Postel stated that the fire began in the rear of one of the first floor units (where 1500A and 1500B are located).

In the meantime, the displaced residents of 1500 McAllister Street are stuck in a waiting game. The building's new owner won't open conversations with the tenants until the sale is finalized, meaning that many are unable to move forward with insurance claims, gathering their belongings, and figuring out how long they'll be out of their apartments.

To donate to the victims of the fire, visit the Fire Fund set up by the Alamo Square Neighborhood Association. And mark your calendars for a fundraising event at Mini Bar on March 4th, which will feature a raffle with gift certificates and prizes donated by local businesses.