If it's Friday afternoon in the Castro, the “litter patrol” is out working.

For the past 11 years,  three men, each dressed in coat and tie or dress shirt, have continued a routine in the blocks surrounding 18th and Castro. John Newmeyer, Strange De Jim, and Mike Brownstone, all armed with four-foot-long metal "grabbers," spend half an hour picking up garbage, followed by a trip to Harvey’s for beverages.

Hoodline met with all three members of the litter patrol to learn about how they began their routine, and how they hope others will help take care of the Castro.

"It all began in 2003, when then Mayor Gavin Newsom began the earliest efforts to legalize gay marriage in San Francisco," explained Dr. Newmeyer. "We wanted to make sure those giving a critical look at our city weren’t dismayed by the look of its gayest neighborhood.”

Within the first month, Dr. Newmeyer found himself in a virtuous circle. "Just as litter encourages littering, the lack of litter inhibits people from littering. Each week there was a little less trash."

Dr. Newmeyer (brother to screen star Julie Newmar), previously worked as the head of research at the Haight Ashbury Free Clinic and is now the owner of the Heron Lake Winery in Napa. He lives in Pacific Heights where litter is not as big an issue, but views the Castro as his "second home," where he goes for lunch, a movie, or bridge. 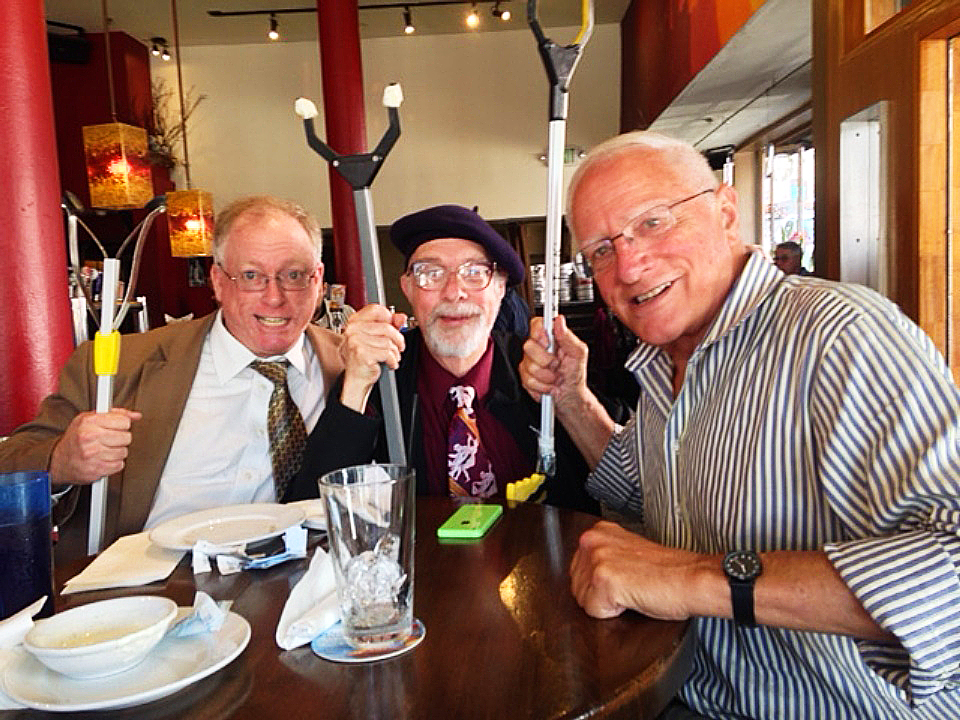 From left to right: Brownstone, De Jim, and Newmeyer

While the group is just a trio of men, they feel their weekly commitment to cleanliness has made a difference, and hope that their example becomes contagious.

De Jim, the only Castro resident in the trio, is somewhat of a local celebrity. Longtime San Franciscans might recall him as being frequently quoted in the columns of the Chronicle’s late great Herb Caen. “Strange,” as everyone knows De Jim by, has written four books, including Billions of Virgins in Ecstasy and San Francisco’s Castro:  A Photo History. When thinking about the litter patrol, he is happy to make the contribution to his neighborhood. "To me, the litter patrol is easily as much fun as everything else I have done."

Brownstone, retired, lives outside of the Castro in Hayes Valley, but shares the same love and goals for the neighborhood as De Jim and Dr. Newmeyer. "We would love to encourage others to join the Friday litter patrol," he says. "Over the years, several others have been part of the effort, but had to drop out for various reasons."

"If you are unable to commit to picking up the trash, at least consider meeting the trio at Harvey’s (at 2:30pm most Fridays) to listen to our presentation about why you might want to join us, " Brownstone suggests.

And if you happen to see John, Strange, or Mike out in the Castro, say "hello" and thank them for their continuing support of the neighborhood.