Chinatown is a prime example of a vibrant neighborhood. Photos: Geri Koeppel/Hoodline
By Geri Koeppel - Published on May 05, 2015.
San FranciscoChinatownEmbarcaderoFinancial DistrictNorth Beach

What makes a neighborhood vibrant ... or not? That was the question a group of neighbors set out to discuss during a Jane Jacobs Walk on the morning of May 2nd from the Embarcadero through the FiDi to Chinatown and North Beach.

In early May, in honor of Jacobs' birthday on May 4, people in neighborhoods around the world gather for Jane Jacobs Walks to walk, observe and connect with their community and environment. The first walk was held in Toronto on May 5th, 2007. Jane Jacobs wasn't a trained urban planner, but her book The Death and Life of Great American Cities "introduced ground-breaking ideas about how cities function, evolve and fail, that now seem like common sense to generations of architects, planners, politicians and activists," according to the Jane Jacobs Walk website.

Jacobs fought to stop Lower Manhattan from being intersected by a freeway and also preserved the character of Greenwich Village and Toronto, among other accomplishments. That hits close to home for many San Franciscans, who worked to tear down the damaged Embarcadero Freeway after the 1989 Loma Prieta earthquake, and also successfully opposed the Panhandle Freeway, which would've destroyed neighborhoods.

Lance Carnes of Save North Beach Village hosted the walk, which included a trio of women from Hamburg, Germany and long-time residents of the area. About a dozen people participated. Carnes said one reason the walk began at Sue Bierman Park was because Sue Bierman was instrumental in opposing the Panhandle Freeway. "She was the Jane Jacobs of San Francisco in some respects," he said. 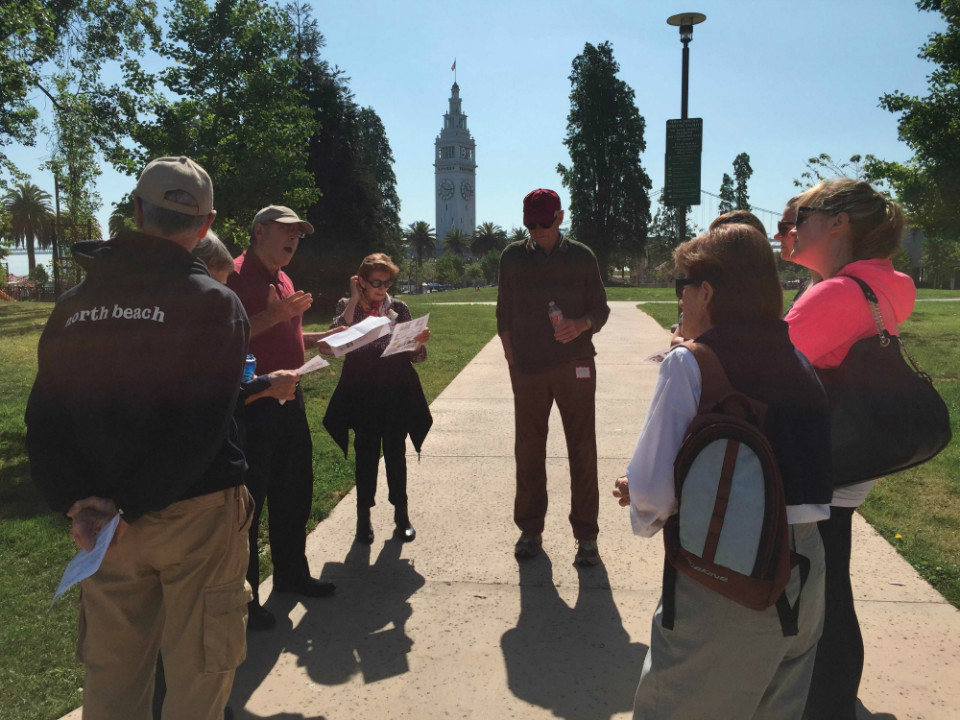 Carnes began by talking about the Embarcadero Freeway and how Sue Bierman Park originally was on the site of the off-ramp to Washington Street, which was used to zip up to Chinatown and North Beach. Gail and Paul Switzer of Golden Gate Commons said it used to take only 10 minutes to get from their home to the Bay Bridge and now it takes 20 or more, but they weren't complaining—they prefer having a longer commute and better neighborhoods.

The group then walked west on Washington Street from Drumm Street to Battery Street through what Carnes called "the Tunnel"—the block bordered on one side by the Gateway Apartments street-level garage and on the other by the Golden Gateway Garage. The lack of activation and bland aesthetics provided a counterpoint for what would come later, in Chinatown and North Beach. On a scale of one to 10, he asked the group to rate the vibrancy. One woman said, "Minus two." (Not to dismiss the Gateway complex altogether, the group did talk about the fact that there are retail shops and services on the street level along Jackson and Battery Streets.)

From there, the walk headed to Hotaling, where the group stopped and looked south to discuss the "Monkey Block," as the Montgomery Block building was called. It sat on the southeast corner of Montgomery and Washington streets where the TransAmerica Pyramid now looms. Fritz Terplan said he could recall when the building was a bustling lunch destination; the Tadich Grill—in business more than 160 years—used to be housed there.

The walk then stopped at Washington and Columbus Avenue to admire the Classic Revival architecture of the historic and landmarked Colombo Building, now home to Original Timber Co. From there, it went to Chinatown, where Carnes said, "We are lucky today to have the unofficial mayor of Portsmouth Square," Wilma Pang, joining the group.

Pang discussed the culture and color of Chinatown, where more than 60 percent of residents live in single-room occupancy units (SROs) with shared bathrooms and kitchens. "This is actually the living room," she said of the lively square. She said people do tai chi in the morning, play mahjongg in the afternoon and perform music in the evenings. The square is a prime example of neighborhood vibrancy. 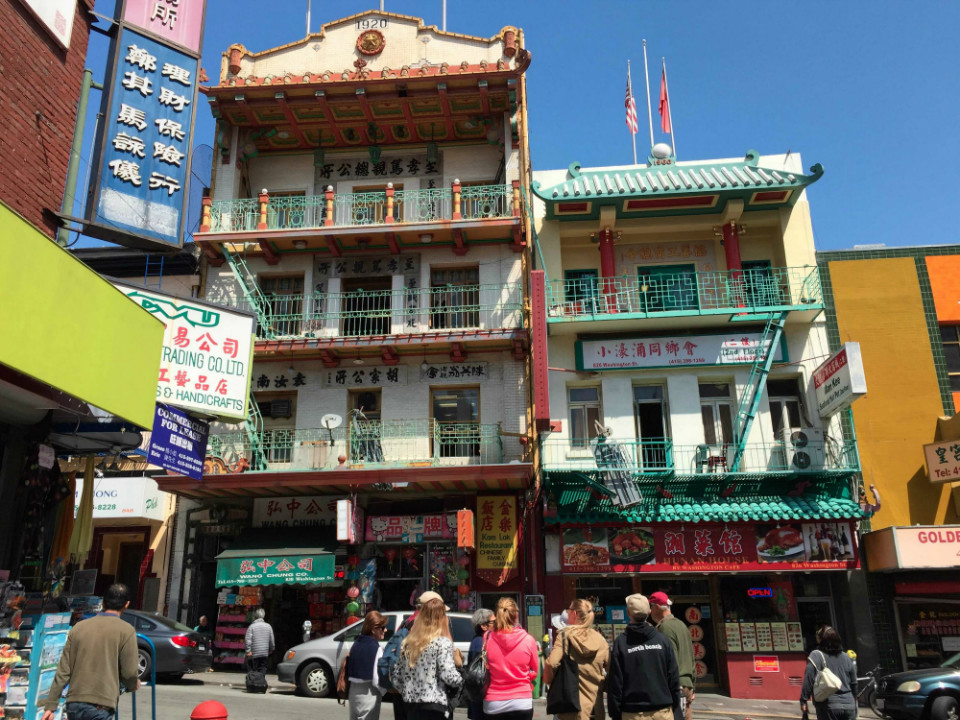 Carnes led the walk down some of Chinatown's colorful alleys and talked about the sense of close-knit community in the area where families of 12 or 15 go to dinner together and grandparents take care of their grandkids while the parents work. "There are no au pairs here," he said. On a scale of one to 10, he said, Chinatown would be an eight, nine or 10. 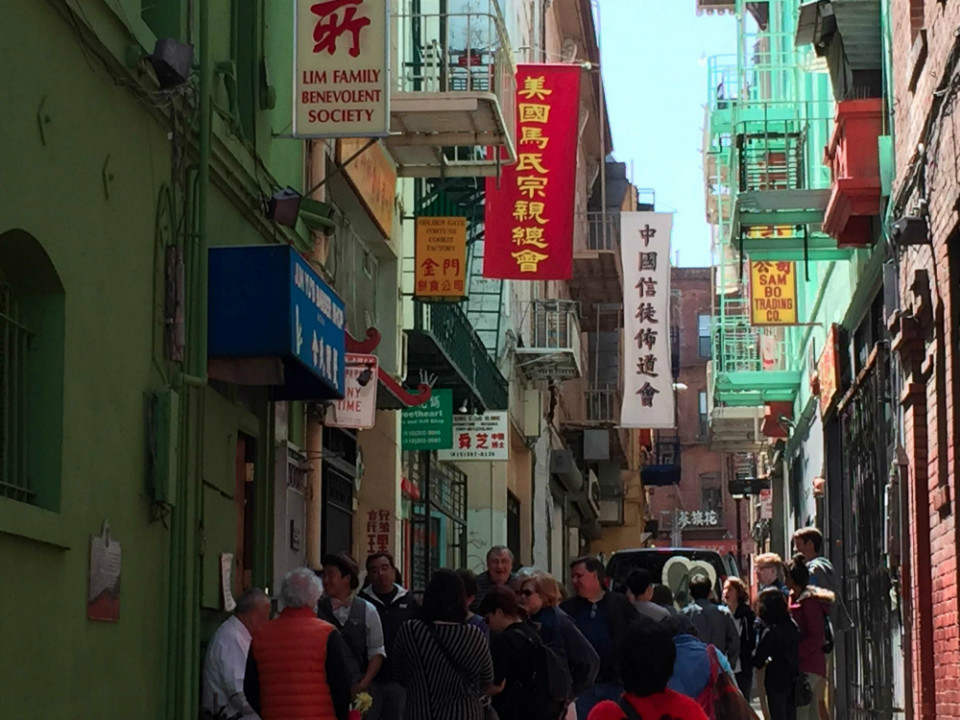 Carnes and Pang also discussed the Central Subway and its current and potential future effects on Chinatown. Usually when a subway station is built, he said, property values go up. But right now, Washington Street is closed and merchants are complaining it's hitting them in the pocketbook. In the long run, is a subway stop a good thing for the vibrancy? He and Pang agreed that's still to be seen. 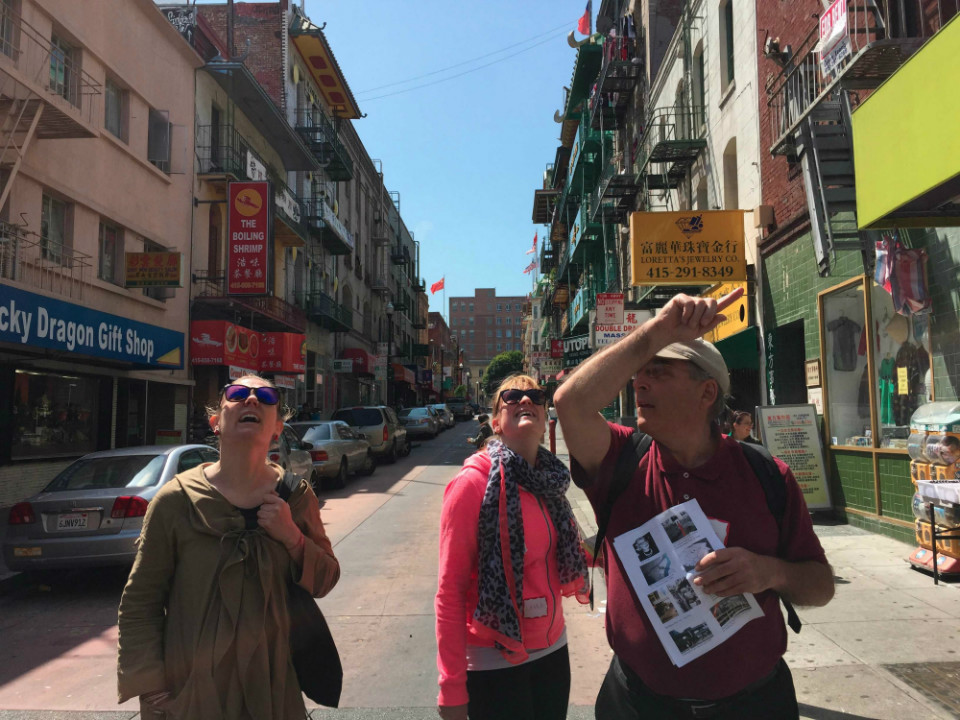 The walk ended with a potluck lunch inside the former Piazza Market at 627 Vallejo St. at Columbus, where Vince Sanchez of local breakfast hotspot Mama's hopes to open a combination restaurant ("Lil' Mama's) and fresh grocer. The space is in the heart of a bustling North Beach, with its shops, restaurants, charming buildings and copious foot traffic. "This is one of my favorite parts of the city; one of my favorite parts of the world," Carnes said.