Less than two weeks ago, the San Francisco Police Department re-drew some of its station boundaries, changing the areas covered by each station. In that move, Northern Station took authority over Alamo Square and Divisadero Street, territory that used to be covered by Park Station. Yesterday, we met with Northern Station's Captain, Greg McEachern, to learn a little more about his station and his time on the police force.

How long have you been Captain at Northern Station, and where were you before?

"I've been Captain at Northern Station for almost three years—it'll be three years in December. I've been with the police department for 25 years. I've spent a large majority of my career in the patrol division, working at virtually every station in the city, with the exception of a couple. Southern Station, Mission Station, Park Station, Northern, Tenderloin, Bayview.

"In addition to spending a large proportion of my career on patrol, I was Captain at Southern for a period of time (when I first got promoted to Captain). I was also in charge of Internal Affairs at the Risk Management Division for a couple of years, which was very interesting."

We've noticed that there's a lot of turnover for captains at San Francisco stations. Park Station had Captain Vaswani for only a year before Captain Sanford took over, and Captain Gracie just replaced Captain Cherniss at Tenderloin Station. With this turnover in mind, did you develop a long-term plan when you began as Captain, or are you more responsive to the Station's immediate needs?

"I would say two things. First, it's important to look at what the immediate needs and goals are of the community out there, and see what you can do short-term to address those needs. But at the same time, I look at where I want the station to be, and where I want the community to be, in three years. I always anticipate that I'll be somewhere for at least that length of time, and we're coming up on that. So it's a little bit of both—immediate need and where we'll be in a few years."

How many police officers currently work at Northern Station? Is that going to change?

"Staffing levels in the department in general have really fluctuated, and were down for a long period of time. In 2008, Northern Station had about 135 or 140 officers, not including sergeants, lieutenants and captains. Because of retirements, staffing levels at our station and citywide went down significantly. When I joined Northern Station in 2012, we had only 90 police officers. We stayed that way for about two years.

"With the redistricting and the academy classes coming through, our staffing levels at Northern Station have started to increase. We currently have 112 officers. We're a training station, and we currently have nine recruits in training who are almost done. Northern Station grew the most of any police station in the recent redistricting. We picked up Divisadero, a hospital, 10 additional schools." 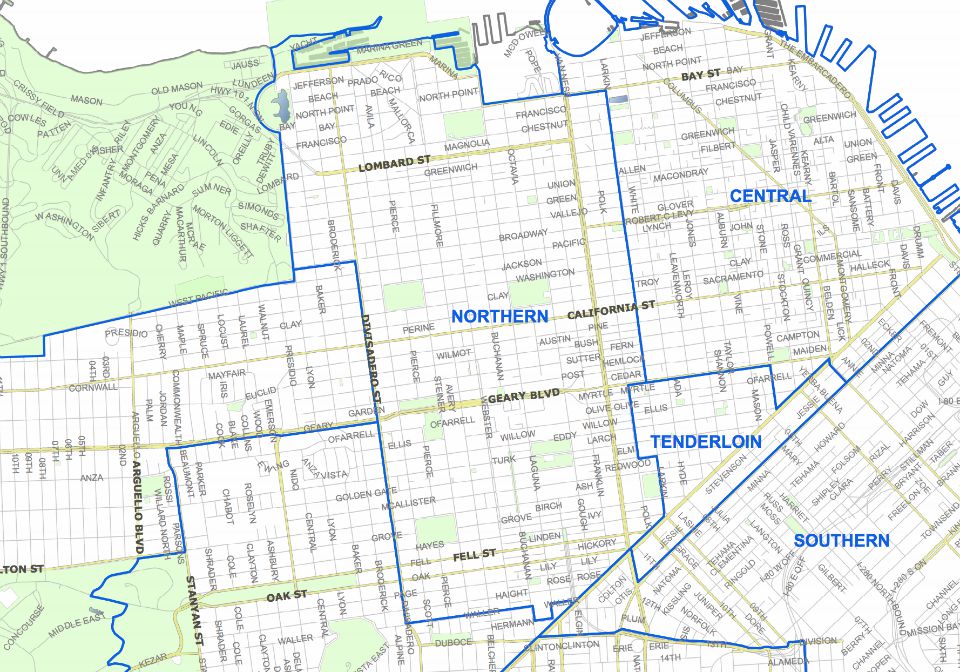 How will response times to Divisadero and Alamo Square change, now that that area is covered by Northern Station and not Park Station?

"The good thing for us is that we're close to those areas, which helps us. Our station is just four blocks from our border's line on Divisadero, whereas Park was all the way over in the park. That's made it much easier for us to respond to calls for service. In addition, we have more staffing than Park Station, so the new boundaries have made it easier to respond more quickly."

What do you find to be some of the unique challenges of Northern Station?

"We have such diverse communities within the Northern District, which many other districts don't have. We go from the Western Addition, where there are times we may see some violent crime, north through Pacific Heights, where it's a totally different level of crime that might occur. Then we go down to the Marina, where we now have bars and clubs and that scene, and then we go east towards Polk Street, where we still have narcotics, and we have a big traffic scene.

"Basically, at Northern Station you have a whole big bowl of soup with everything involved. It's great for our officers, because they get really challenged to handle everything that's out there.

"Where we've been challenged, and where we've been challenged in the city overall, is property crime. It's up significantly. Violent crime is up a little, but not to levels even close to where we are with property crime. This time last year, we probably had 1,200 or so car break-ins in a six-month period. We're well over 2,000 this year, in the same period. We see a lot of it in the areas where there's more foot traffic, more tourist attractions, more activity. By adding Alamo Square and Divisadero, we're adding break-ins that were previously handled by Park Station.

"Our challenge is to make sure that we provide the same services to the areas we've added. The last thing that I want is for the community that we've added to think that they're not getting the services that they deserve.

"The other challenge that I see us facing now, with the redistricting, is really getting the officers to know the new area and community that they're serving. Visiting the businesses that are on the corridor, meeting the neighbors that are now in an area that they've never patrolled before, hearing what their concerns and challenges are." 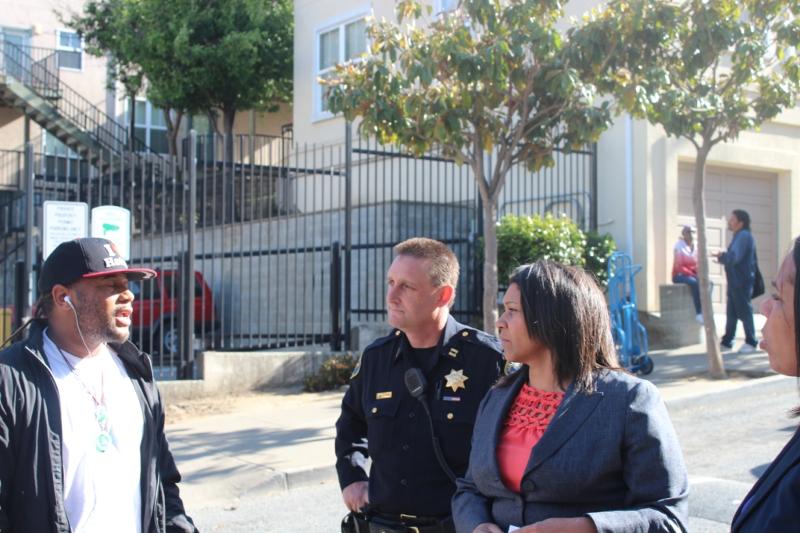 Tell us a little bit about how Northern Station addresses the Focus on the Five campaign.

"Each month, we have at least five dedicated traffic operations officers, and we focus on what the five main collision components are. Then, what we add here is a list of four or five locations that are what we feel have the highest rate of collisions. This info comes from collision reports, emails from the community, emails that I get at public meetings—I send that down to my point personnel to let them know which five intersections we need to focus on each month. We work to increase citations at those intersections specifically.

"It is also stressed to the officers that even though they are responding to property crimes, traffic enforcement and education is a vital component of what they have to do in their daily activity."

There was a event yesterday on The Wiggle to protest stop sign enforcement for cyclists, and I also heard that citations were being issued on Page Street recently by Northern Station officers. Can you talk a little bit about Northern District's response to cyclists in the community?

"I've gotten feedback from the community about traffic concerns in the Page Street area, but not in particular about bicyclists coming through. What I always tell my officers when we do our enforcement is that we don't target any specific entity of traffic—pedestrian, bicyclist or a vehicle. What we do is we respond to a location and we look for what violations are occurring.

"We don't focus on any one specific thing—what we're trying to do is save lives. I think everyone would agree that there are violations of traffic laws by everyone; we'd be naive if we thought that it didn't happen by all groups. We focus on what we feel we need to focus on to make sure that collisions go down, and that we reach the Vision Zero goal of reducing fatalities by 2020."

Tell us a bit more about you. What do you do when you're not working as a Captain? How do you de-stress when you're off the job?

"Outside of work, I spend time with my wife, my son, and my two daughters. I also have a two-year-old granddaughter. I like traveling, I like to play golf. A little bit of biking.

"I also make wine. I have a vineyard in Novato. That's one of my hobbies—I have a small vineyard and I tend that, and that's my calming place. I spend my weekends there tending to that; it's one of the joys that I have."

[Ed. note: this interview was conducted prior to today's incident which saw a suspect die in the process of an arrest in the Marina, part of Northern Station's district. The incident is under investigation by the SFPD.]

Northern Station is located at 1125 Fillmore St. It can be reached via email at SFPDNorthernStation {at} sfgov {dot} org, and via phone for non-emergency calls at (415) 614-3400.