With all of the hustle, bustle and construction taking place around Yerba Buena Gardens, it's easy to overlook the whimsical, historic carousel that graces the corner of Howard and Fourth Streets. In honor of the annual holiday lighting ceremony (complete with free rides) being held there this coming Saturday, Nov. 28th, here's the story of the city's hand-crafted LeRoy King Carousel, which has been spinning locals 'round and 'round for more than a century. 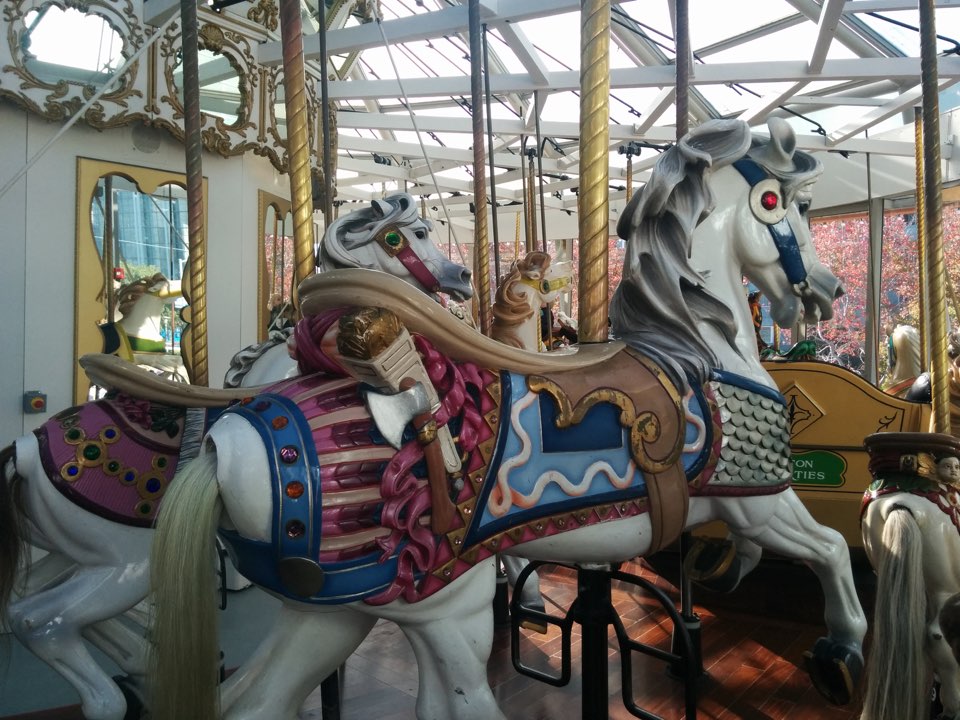 A horse on the carousel. (Photo: Brittany Hopkins/Hoodline)

The carousel was built from 1904-1906 by Charles I. D. Looff, a master carousel carver and amusement park entrepreneur. Looff also constructed the first carousel at Coney Island in Brooklyn and the carousel at the original amusement park on the Santa Monica Pier. The amusement park for which it was crafted is long gone; it was located near Market and Van Ness Ave.

Looff's carousel features ornate horses, dragons, lions and other zoo animals, with faux jewel-encrusted saddles. They bob up and down as they whirl around. 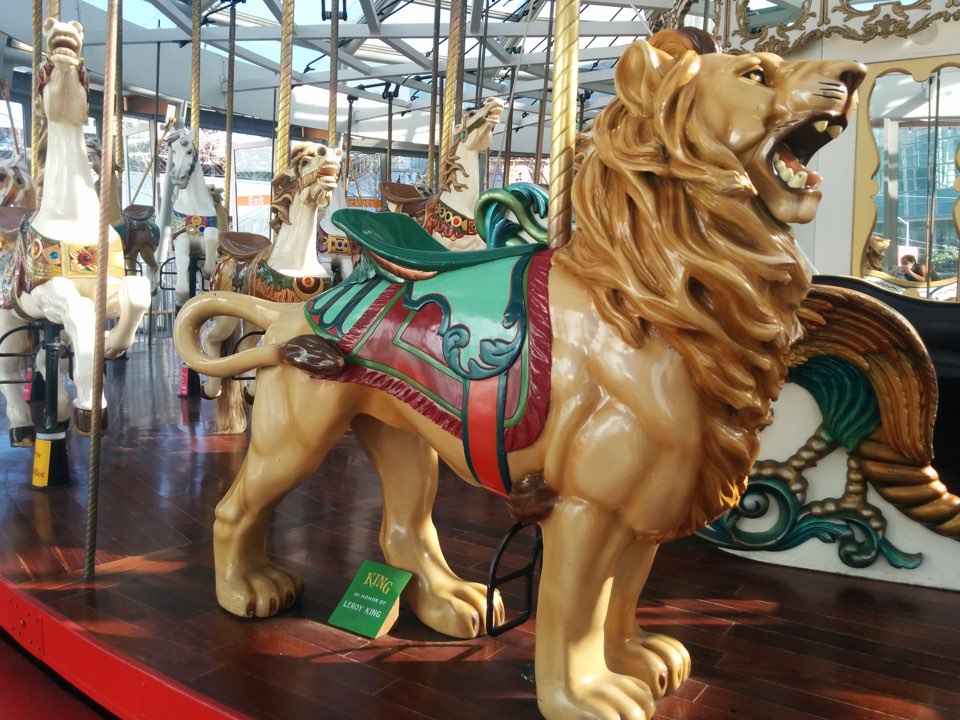 A lion on the carousel. (Photo: Brittany Hopkins/Hoodline)

The devastation caused by the 1906 earthquake and fire halted the carousel's move to San Francisco; upon completion, it was sent to Seattle's Luna Park instead. But Luna Park, shrouded in politics and morality scandals, closed abruptly not long after. 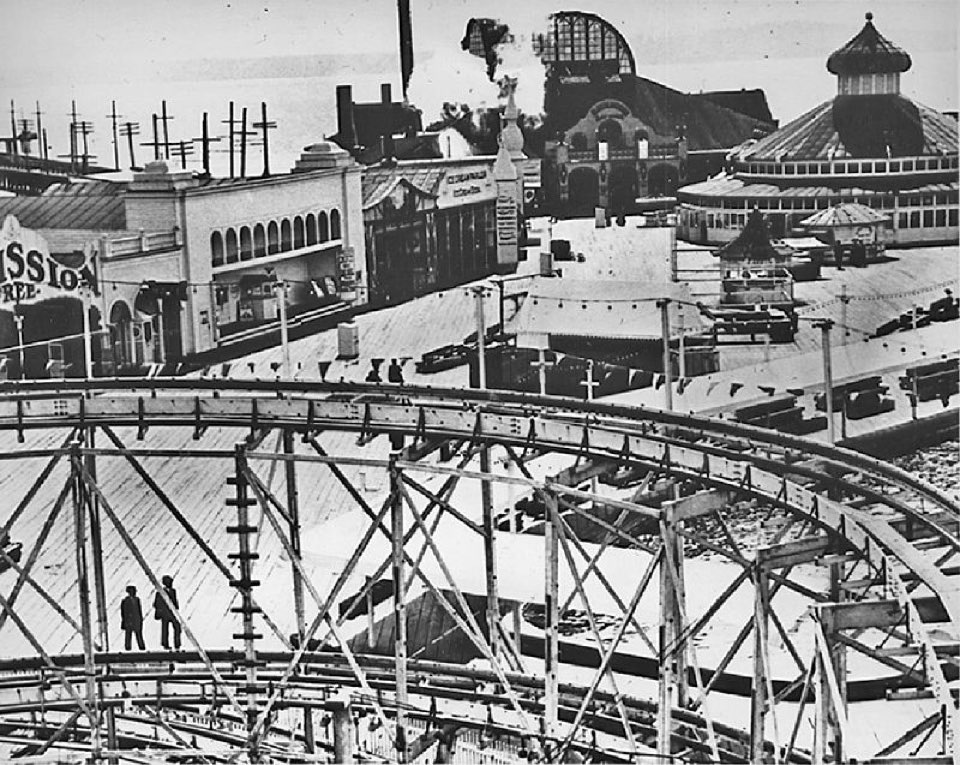 After Luna Park's demise, the carousel hit the road again, finally landing at San Francisco's booming Playland-at-the-Beach amusement park. For nearly 60 years, it resided at the park, near Ocean Beach. But by 1972, Playland's allure had worn off, and the amusement park shuttered that August.

Just one month later, the park was demolished, and the carousel was purchased by a private collector, Marianne Stevens, before it could be dismantled and sold in pieces. After the sale, it was sent to Mexico City, where it was placed in storage for about 10 years and restored. In 1983, it was leased to Shoreline Village in Long Beach.

In 1988, redevelopment agency commissioner and civil rights leader LeRoy King led an effort to return the carousel to San Francisco. His connection to the historic carousel dated to the 1930s, when he took his wife to Playland on their first date.

The city purchased the carousel for $1 million, and placed it in a glass pavilion alongside the Children's Creativity Museum (then the Zeum Museum) in Yerba Buena Gardens as a way to attract families to the then-new 87-acre green space. In 2014, a year before his death at the age of 91, the city renamed the carousel after King. It also underwent a major restoration.

Today, the LeRoy King Carousel is open from 10am to 5pm daily, charging $4 for two rides. (If you purchase admission to the Children's Creativity Museum, that's discounted to $3.) Proceeds benefit the museum; for a $1,000 to $5,000 donation, families can adopt and name their favorite figurine for a year. 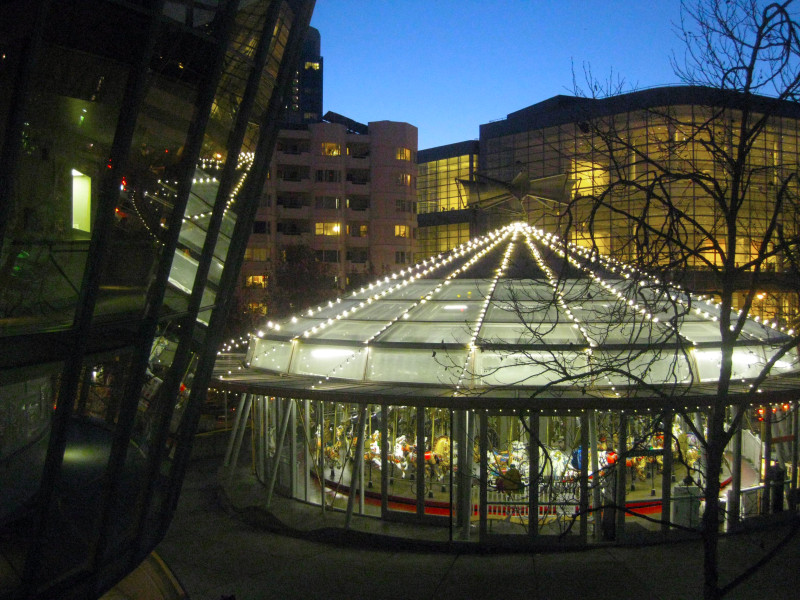 To celebrate the holidays, the Children's Creativity Museum is teaming with the Yerba Buena Ice Skating Center, the Yerba Buena Gardens Festival and the park's management group to host a grand lighting ceremony from 5-7pm this Saturday, Nov. 28th. Former San Francisco Mayor Willie Brown will flip the switch on the holiday lights atop the carousel pavilion; rides will be free until 7pm.

Following the ceremony, visitors can also enjoy hot cocoa and cookies from the garden's concession stand, live entertainment from Chelle & Friends, skating demos on a temporary rink set up in the gardens, and a special performance inside the Yerba Buena Ice Skating Center.

San FranciscoSoMa
About 3 hours ago