Yesterday afternoon, the Port Commission decided to table a request from Port of San Francisco staff to put out a request for proposals (RFP) from businesses interested in occupying the bulkhead, or front, part of the Pier 29 building.

As we reported on Tuesday, the Port indicated it would like a tenant that would bring in local artist/designer/maker uses, live demonstrations, displays and possibly artists' studios. But the Commission said it wanted more detail in the RFP—and more input from the community—before it goes out. 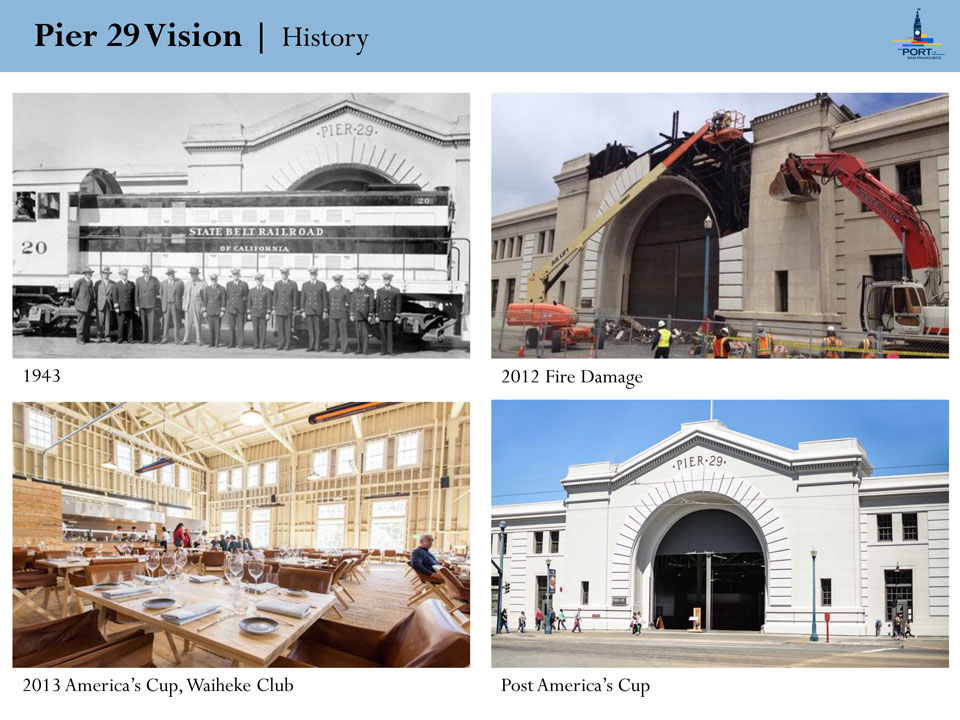 The Port had previously given informational presentation about potential uses for Pier 29 to the community on August 13th, 2014; it was also discussed at a meeting of the Port's Northeast Waterfront Advisory Group (NEWAG) on July 8th.

Golinger asked for the RFP to not move forward until there's community input. "This is the site where many of us fought to stop a mall from taking over the piers 10 years ago," he said, adding that Pier 29 is the "front porch" to that area of the waterfront, especially since the Pier 27 cruise terminal opened in 2014. He also suggested the Port look at possible recreational uses for Pier 29, similar to Chelsea Piers in New York City.

The Port's executive director, Monique Moyer, pointed out that this RFP is only for the 20,000-square-foot bulkhead portion, not the entire 150,000-square-foot shed behind it as well. "Nothing has been ruled out in the way of recreation or public access for the shed itself," she said. 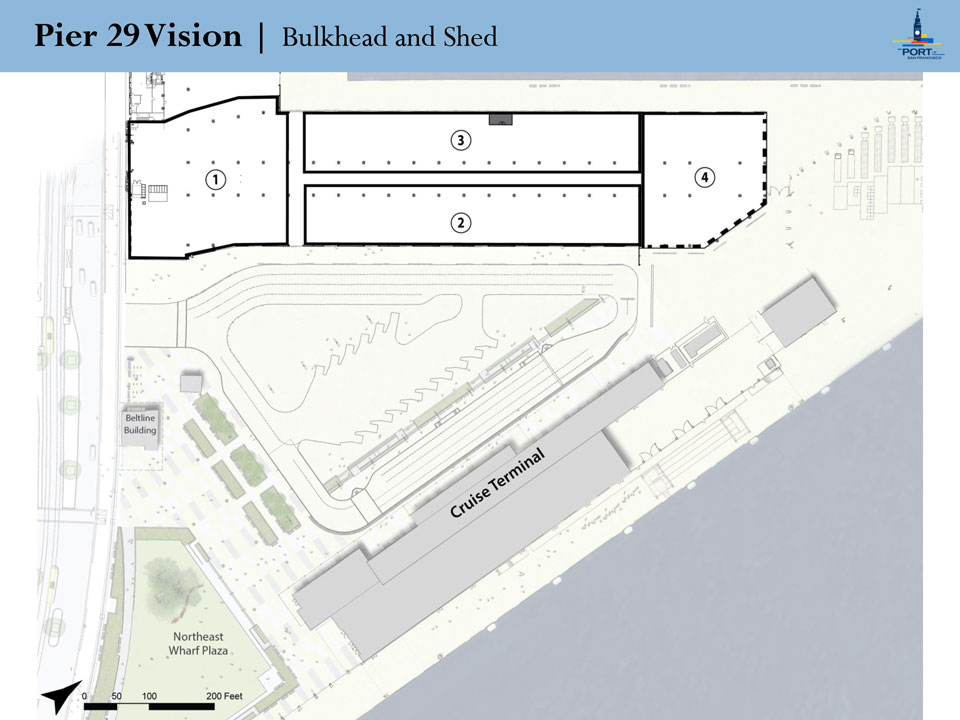 Given the number of housing units across the street and the potential traffic and congestion implications of adding retail, Harrer suggested the Port do neighborhood outreach before an RFP is issued. "We recognize there's a need to bring Pier 29 back into some sort of productive use," he said, but he was under the impression there would be another step involved before the RFP was issued. "There is no real mention of public outreach or communication and review with the neighborhood."

Discussion among the commission and with Moyer ensued. Commissioner Doreen Woo Ho said she'd like more information and input before putting out the RFP, while commissioner Kimberly Brandon said she wasn't sure if the ideas put forth were the best or only use for the site.

Moyer said she understand's the community's concerns. "One of the things we could do, quite frankly, very easily—without having to go through any process—is to put this space out for a restaurant on our normal retail lease bid," she said. "In talking to the community—formally through the NEWAG, but informally with the rest of our tenants—there was a lot of concern about a major restaurant coming in, taking all the space, and potentially cannibalizing the market share of our current tenants. And we definitely didn't want to do that."

Moyer also noted that the RFP allows for multiple bidders. "We don't want a user that would be one 20,000-square-foot use." But because the Port doesn't have the ability to manage a variety of stalls, they'd like to get one master tenant to oversee everything.

In the end, the Commission decided to hold over the RFP so it could be clarified and so the community could weigh in. The next NEWAG meeting is at 5pm December 2nd at the Port's Bayside Room on Pier 1, and the next Port Commission meeting is at 3:15pm on December 8th, at the Pier 27 cruise terminal. The waterfront working groups and advisory teams, which we've reported on, are expected to help shape the use for the remainder of Pier 29.

"I think it was a prudent decision. I was encouraged by their comments relating to more outreach to the community," said Harrer after the meeting.

We also asked Port staff how long the lease for the Pier 29 bulkhead would be, given that the Port wants to eventually find a use for the rest of it. The answer: It would be long enough for a tenant to amortize improvements, but would not be a long-term development lease. They're remaining flexible in terms of specifics right now.

San FranciscoEmbarcadero
About 22 hours ago