On Monday night, the SFMTA's Muni Forward program held a second open house at Grace Lutheran Church (3201 Ulloa) on proposed changes to the L-Taraval line which would include stop removals and new boarding platforms.

The meeting kicked off with a presentation from Kennedy on Vision Zero, the city’s ambitious program to reduce traffic fatalities to zero by 2024. As the light rail can only be boarded directly from middle of the street, he said, the L-Taraval corridor is one of the city’s most accident-prone.

To board and exit the L-Taraval, passengers must cross into direct traffic, and drivers often speed trying to pass the light rail. Over the last five years, Kennedy said the corridor has seen 46 pedestrian injuries, with 22 riders injured getting on and off the L-Taraval. 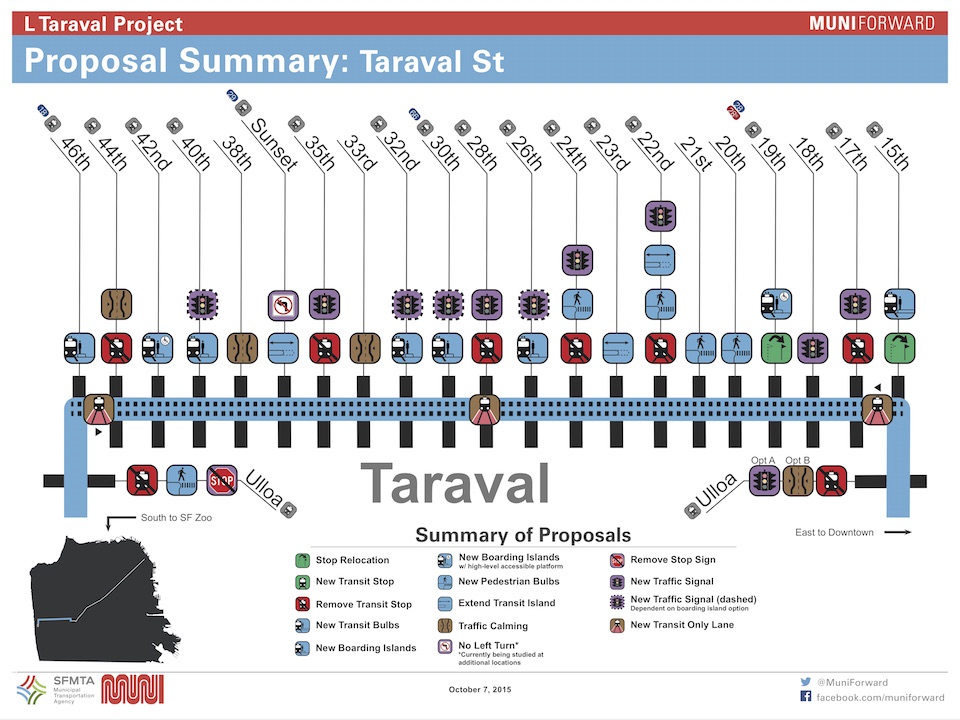 The L-Taraval corridor proposals include:

The proposals deal with both safety and reliability. According to Kennedy, boarding islands would reduce injuries caused by boarding and disembarking into direct traffic. The changes would also reduce the time from West Portal to the San Francisco Zoo by three minutes.

Many of the changes were met with protests from the audience during public comment. Boos greeted the most controversial change: the proposed removal of stops. Some residents along those stops, many of them elderly, vigorously protested the removals.

“I’ve talked to 300 people who have not heard about the elimination of stops, “ said local resident Paula Katz. “Over 95 percent signed our petition to keep our stops. People want to keep their stops. They don’t care about the extra three minutes it’s going to take if it’s going to be detrimental to seniors.”

“I think the boarding islands and the transit lanes will have an adverse impact on our businesses”, said Albert Chau, the owner of Great Wall Hardware on 28th and Taraval. “I don’t see it as money well spent to save three minutes.”

Some residents also voiced their concerns on enforcement of existing laws against drivers who pass the L-Taraval when passengers are getting on and off. Although there are signs along the corridor informing drivers of a $250 fine for passing the Muni light rail when it’s stopped, the law is rarely enforced.

The city will now review public comments and hold another public outreach meeting in late January (time and date to come). We'll let you know when the next meeting will be held, but in the meantime, you can: