Will part of I-280 be razed? How might a high-speed rail line enter the city? And what will become of the Mission Bay area once tracks are rerouted and housing built? Those were some of the questions which drew hundreds of local residents to a meeting at the Potrero Hill Community Center on Tuesday evening, where the Planning Department previewed initial findings from the first phase of a long-range study dubbed the Rail Yard Alternatives and I-280 Boulevard Feasibility Study (RAB).

With local, state and federal dollars being poured into three major transit projects — Caltrain electrification, the California High-Speed Rail and the Transbay Transit Center —  the Planning Department is investigating how San Francisco can most efficiently and cost-effectively connect all of these public transit investments locally and regionally, and Tuesday's presentation represented a first look at what plans could develop. 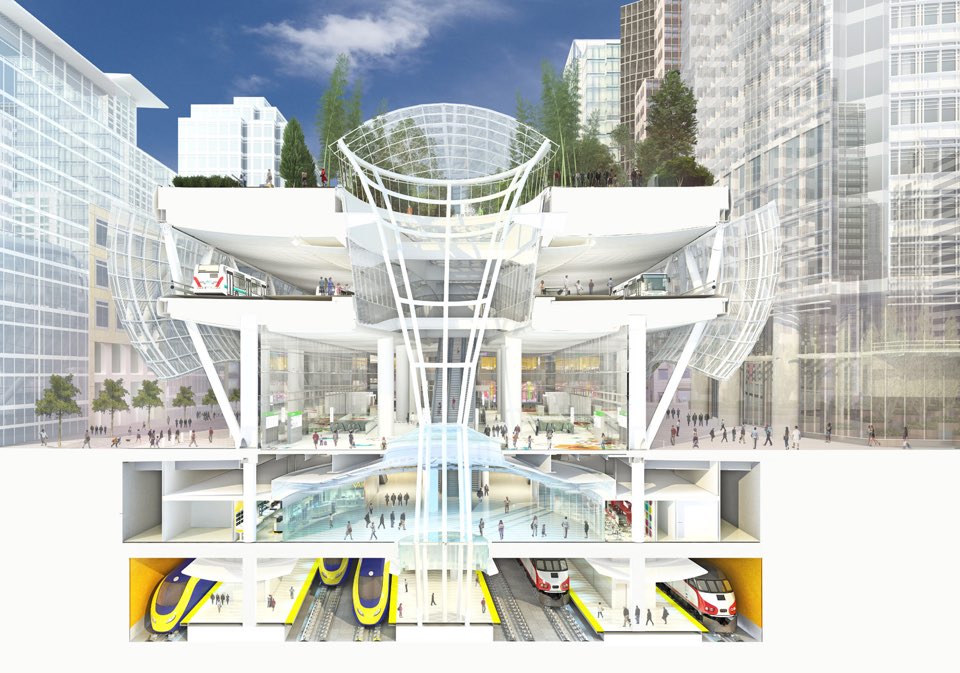 A rendering of the Transbay Transit Center opening next year.

Catching the department off-guard, hundreds of residents turned up, making it difficult to find a seat or standing room in the small, densely packed auditorium. After apologizing for the oversight and vowing to host a follow-up session at a later date with residents too uncomfortable to stay, Gil Kelley, Director of Citywide Planning, kicked off the presentation.

From the beginning, Kelley stressed that the goal of the study is to analyze transit projects coming to fruition in the next 20-30 years holistically, so they'll work for San Francisco and its expected growth 50 years from now.

And despite recent news reports focused on the idea of razing a 1.2-mile portion of I-280 and turning the connection into a boulevard South of Market, Kelley made it clear that it's a "very minor section of the study," and the department has spent little time analyzing the prospects so far.

Four other categories have been studied in more depth and will be examined further over the next year. Those areas are realigning the downtown rail extension to bring high-speed rail system to the future Transbay Transit Center, creating a loop that ensures both Caltrain and high-speed rail do not dead-end at the future transit hub, reconfiguring or relocating the Fourth & King railyard and the resulting public benefits if parcels of public land were freed of transportation infrastructure.

Starting with the Downtown Rail Extension, Kelley presented four potential tunnel routes that would take high-speed rail and Caltrain to the Transbay Transit Center. One option, digging a tunnel beneath the existing route, was studied and will not be considered moving forward. 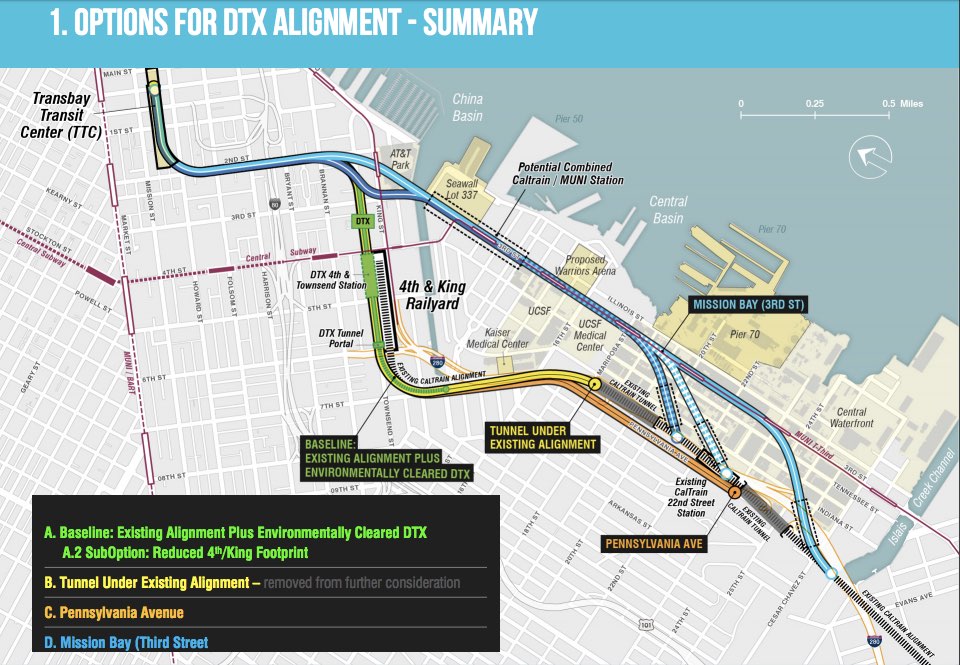 Next, the department is analyzing solutions for ensuring rail lines can loop in and out of the Transbay Transit Center, and potentially connect with a second Transbay Tube beneath the bay to the East Bay and beyond. Through this initial study, the department found that Main Street and Spear Street won't accommodate the turning radius of high-speed train sets and have been removed from further study, Kelley said. 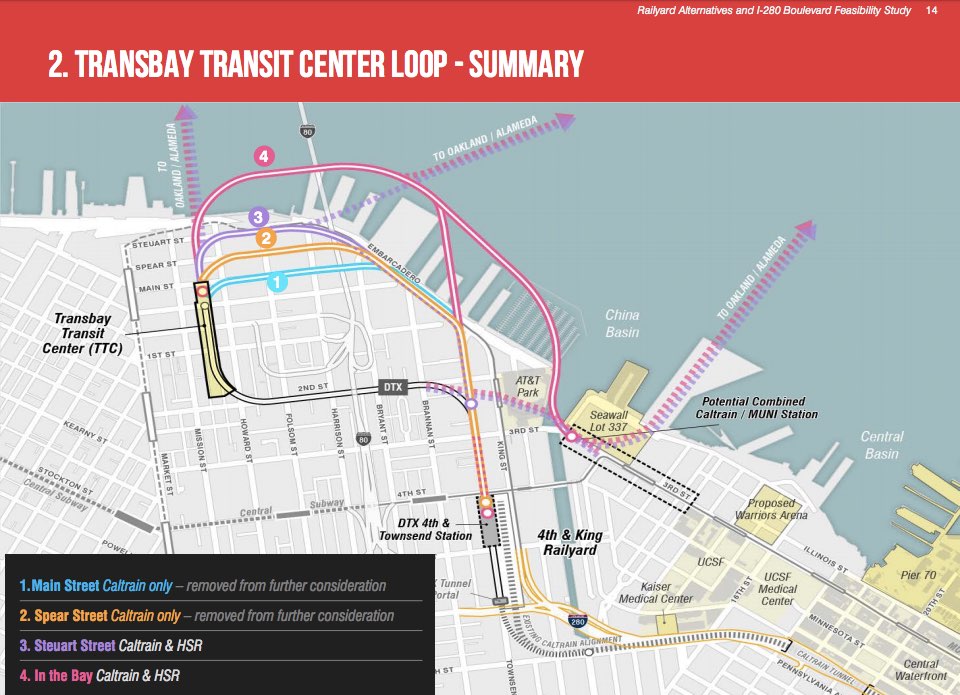 When it comes to potentially relocating the Fourth & King railyard, Kelley was optimistic, stating that the department does believe there are alternative locations, assuming that Fourth and King is no longer the final destination. 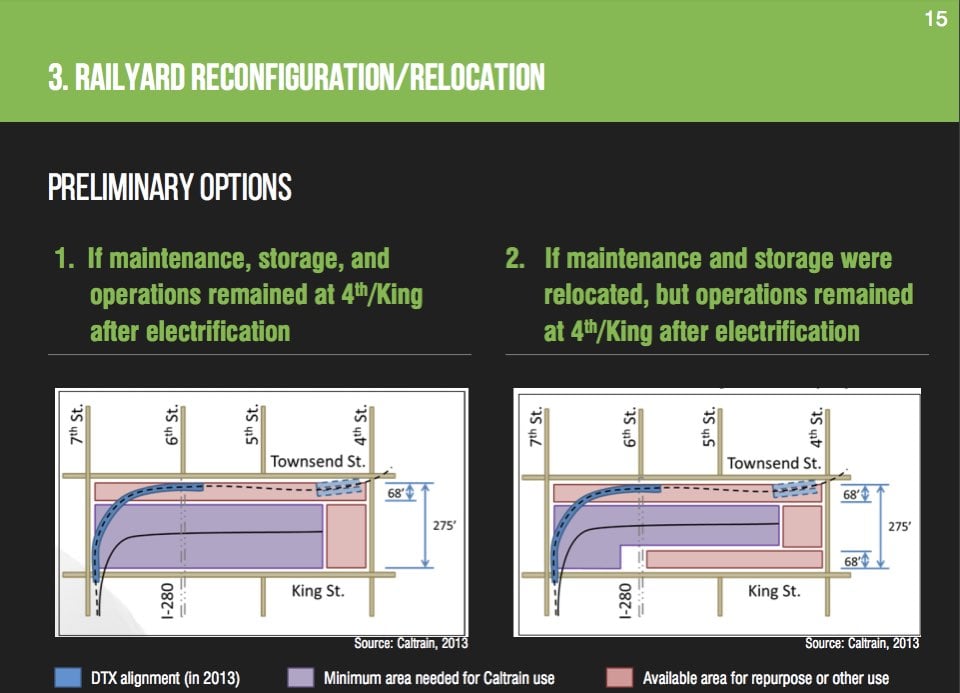 And finally, there's I-280. Kelley informed the crowd that the department will continue to work with Caltrans, SFMTA and the San Francisco County Transportation Agency to study the feasibility of razing the last 1.2 miles of the freeway, potentially ending it as far back as Mariposa Street in Mission Bay. This could be done all at once or in pieces, he said, and there will be a large public discussion focused on this aspect down the road. 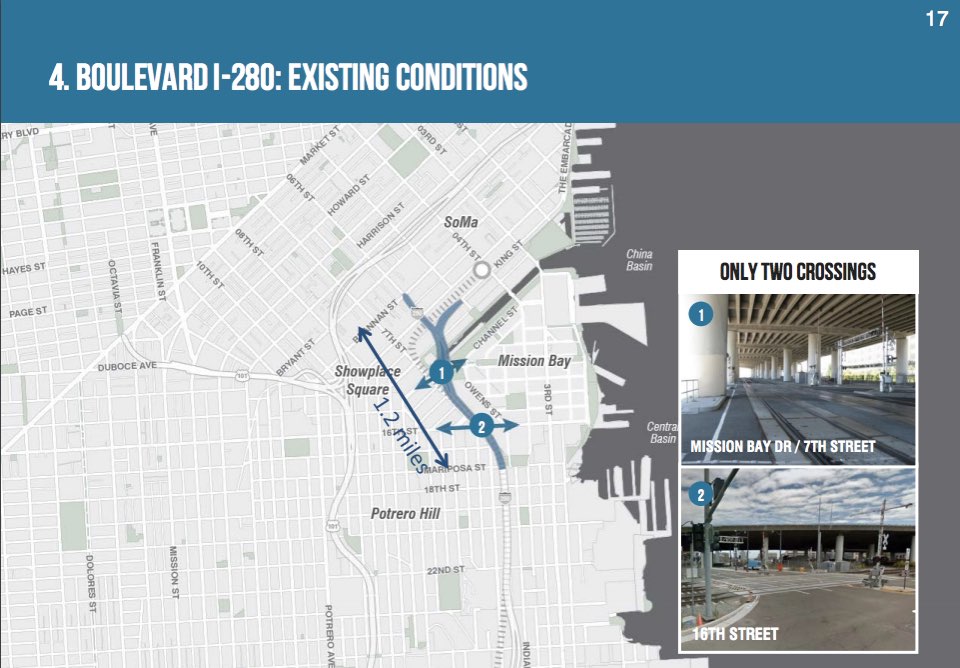 While Kelley and team hoped to end the presentation without a Q&A session and allow staffers to field questions one-on-one or in small groups, he was often interrupted by attendees with heated concerns about a slew of related topics. Some of those concerns included how much housing growth this study is planning for and where, repercussions of razing a portion of I-280, and whether this long-range study is delaying Caltrain's electrification plans. Kelley assured attendees that their concerns were being studied — which drew more criticism from residents eager to hear concrete answers.

One woman in the audience also challenged the assertion that SoMa should go from industrial to “urban,” assuming public lands are freed for other uses. Another man questioned the assumption that this area would be a center of growth moving forward, asking whether Planning has a “crystal ball.” Kelley responded that they used the city’s development pipeline and assured him that much of the housing growth on the horizon is in the southern portion of the city.

Additional public meetings on the study are slated for this fall and winter, as the Planning Department further analyzes these alternatives.

More details and the full presentation are available on the project website. For those who'd like to catch the next presentation live, we'll post the details on our events calendar once they're announced.