How Fort Mason Went From Coastal Fortification To Cultural Destination

By Laura Thompson - Published on May 07, 2016.
San FranciscoMarinaFisherman's Wharf

Remnants of military presence are scattered throughout the city, but many of them are so well integrated into our neighborhoods that it's possible to overlook San Francisco's significant historic role as a coastal defense post.

We have the US Military to thank for many of our waterfront open spaces, and Fort Mason is a park that is well-used by locals and visitors alike. Fort Mason, and many other former military sites, are now part of the Golden Gate National Recreation Area, a unit of the National Park Service.

Fort Mason is located on the city's northern shoreline between Aquatic Park and Marina Green, and within its 1,200 acres are a wide range of activities and experiences for city residents and tourists. There really is something for everyone here, including bicycling, photography, shopping, picnicking, hosteling, jogging, dog walking, dining, drinking, conferencing, visiting the theater, special events, galleries, museums, educational forums, music, dance, comedy shows or guided history walks. There is so much going on it seems that Fort Mason functions as a small town unto itself, with the backdrop of stunning panoramic bay views and historic military buildings.

The park is divided into two quadrants: Upper Fort Mason and Fort Mason Center (map). Upper Fort Mason is accessed by vehicle from the Franklin Street entrance off Bay Street and by foot and bike along the San Francisco Bay Trail, which traverses the park parallel to the shoreline. The steep rocky outcrop near Aquatic Park known as Black Point, named for the dark laurel trees that historically defined the landscape, is the only unaltered section of San Francisco's shoreline edge. The National Park Service is currently rebuilding an historic seawall near here, and as a result, a portion of the Bay Trail along MacDowell Road is closed until early summer. Signs throughout the park guide bicyclists and pedestrians along a detour route.

Looking out over the Great Meadow, the view of San Francisco Bay, the Golden Gate Bridge and the Marin Headlands is striking. The downtown skyscrapers rise up in the east and the hilltop homes of Pacific Heights stretch along the ridge to the south. As you explore Upper Fort Mason, you can begin to understand the strategic importance of this hilltop promontory, imagining the challenge of protecting the city during a time of seaside invaders.

The Fort was established in 1851 as a US military reservation called Point San Jose. During the Civil War, the fort served as a coastal defense battery and in 1882 was renamed Fort Mason after Colonel Richard Barnes Mason, the second military governor of California. For a brief time, the fort was a temporary relief camp sheltering thousands left homeless by the 1906 earthquake and fire. The Army post hospital, built in the Colonial Revival architecture style, served the wounded since it was constructed in 1902, and today it houses the headquarters for the Golden Gate National Recreation Area and the Golden Gate National Parks Conservancy as well as a park visitor center.

During World War I the fort transitioned from harbor defense to transport hub and throughout World War II and the Korean War, it was the center of the San Francisco Port of Embarkation, orchestrating shipping activities and the movement of supplies throughout the entire region.

Fort Mason Center, formerly known as Lower Fort Mason, encompasses the bayside portion of the park. The parking lot (fee) is accessed from Marina Boulevard at Buchanan Street, and the Bay Trail connects bicyclists and pedestrians from Upper Fort Mason and the Marina Green. Today, this is where most of the activity occurs in the park. The Fort Mason Center for Arts and Culture hosts artistic programming and nearly two dozen non-profit organizations are housed as permanent residents in the historic buildings.

In 1914, this was a busy place in a much different form. The Army launched the construction of piers and warehouses to support the war efforts and the need to move cargo and deploy troops. The next year, a 1,500-foot tunnel was constructed under Fort Mason to extend the State Belt Railroad from the Embarcadero to the Presidio. Freight railroad service ended in 1993 and the tunnel has remained closed since then. In 2013, the National Park Service completed environmental review for an extension of the F-Line streetcar through the tunnel to Fort Mason Center, but the construction schedule is not yet known.

In the 1960s, the Department of Defense determined that Fort Mason was no longer required for military purposes. Over the next decade, a public debate about the future of the site played out at the local and national levels. Congressman Phillip Burton, a representative of San Francisco, was a champion for the creation of an urban national park that would re-purpose and interpretive many of the former military posts in San Francisco, San Mateo and Marin counties and provide public recreation opportunities. His legislation created the Golden Gate National Recreation Area in 1972, now encompassing 125 square miles across across three counties.
In the 1980s, many buildings that covered Fort Mason were removed to make way for the Great Meadow. As you walk the streets and trails of Fort Mason, you will see buildings that span the post's entire construction period, from 1855 through the 1940s. The National Park Service converted many of these remaining buildings into civilian spaces, including residential. 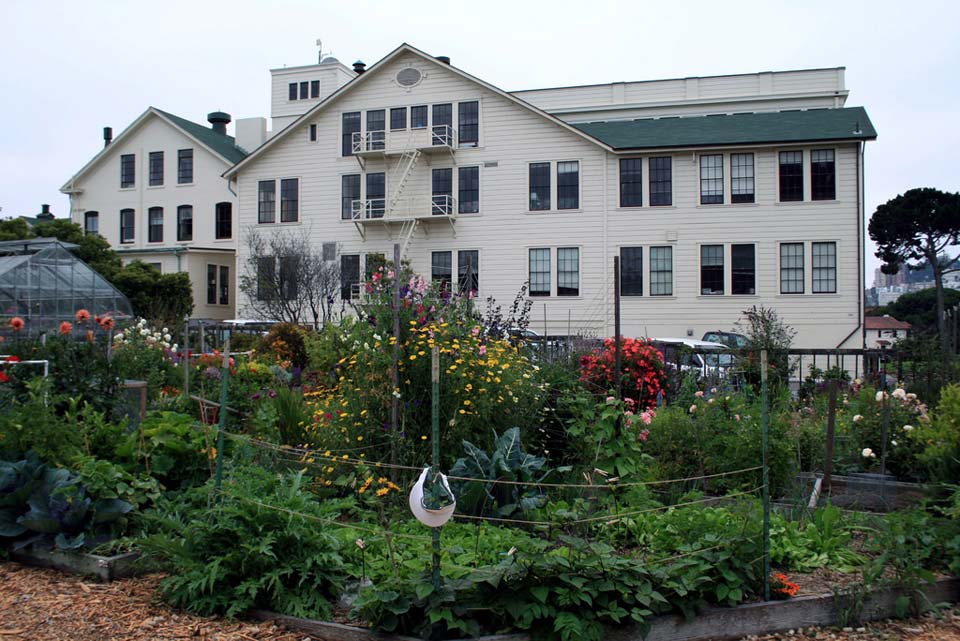 Fort Mason Community Garden behind the park headquarters, built in 1902. Photo: Flickr/Katherine H
Don't miss the Fort Mason community garden, located near the headquarters building. It's growing on the site of the original 1890 garden and open to the public for strolling among the plots of vegetables, herbs and flowers.  Another must-see is Hostelling International's Fisherman's Wharf Youth Hostel located on MacDowell Road in Upper Fort Mason. It is quite possibly the most beautiful setting for lodging in the city and the only hostel in San Francisco that permits city residents to book a room.
The National Park Service provides a self-guided walking tour and San Francisco City Guides offers regular free guided historic walking tours of Fort Mason. The next tour is Friday, May 13 from 1:30pm-2:30pm.

On Friday evenings from 5pm to 10pm, Off the Grid hosts over 30 food vendors with live music at Fort Mason Center.

Getting there: The 28-19th Avenue, 30-Stockton, 47-Van Ness and 49-Van Ness/Mission buses stop at Bay Street and Van Ness Avenue near Upper Fort Mason. The 43-Masonic stops at Marina and Laguna streets near Fort Mason Center. Dogs are allowed on leash and restrooms and drinking fountains are located in both sections of the park. Most of the trails in the park are wheelchair accessible.