It’s been more than four years that we’ve been following a proposed high-rise hotel and condo project at 447 Battery Street, about a block north of Embarcadero One. That original plan, which would have demolished the current brick Cort Furniture Rental building at the location, has neither broken ground nor received any new building permits since. The project architect has changed the design a couple of times, and today Socketsite reports the architect is submitting their third new design — which keeps the three-story brick building intact, and slaps an elaborate 15-story luxury hotel “addition” on top — but none of this has been approved by the Planning Commission, and it’s all still just theoretical architectural renderings.

In 2019, both Socketsite and the San Francisco Business Times reported that the developers had ditched the condo idea and converted to a “strictly hotel and restaurant” concept, in the words of Heller Manus Architects founder Jeffrey Manus. That change came with a redesigned exterior that was, well, perhaps a little questionable. The Business Times sold the change as “another sign of the city's booming hospitality industry”, which was certainly true at the time. 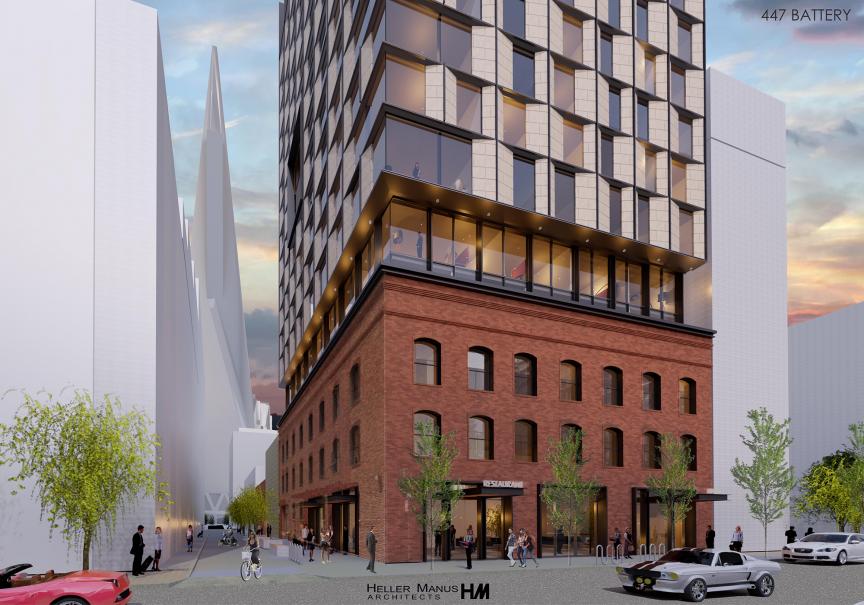 Fast forward to the new design, seen above courtesy of Heller Manus, which retains the current Cort Furniture store brick facade. Cort Furniture still lists themselves as open at the location, and their phone number is in operation. Heller Manus’ website does not indicate their plans for what would be rendered the lower three stories of the property.

Socketsite reports that “the impact report for the project has been drafted and will be formally reviewed and heard by Planning next month.” We do not see it as an item on the Planning Commission agenda for their Nov. 5, Nov. 12, or Nov. 19 meetings, and of course the Nov. 26 meeting won’t be held because it’s Thanksgiving Day. But it is totally normal for Planning Commission agendas to be altered at the last minute, or even during the meeting. A permit search on “447 Battery” on the Planning Information Map does not show any new permits requested or granted at the address since 2016, but again, that is normal snail’s-pace San Francisco development for you. We’ll keep an eye on this one. 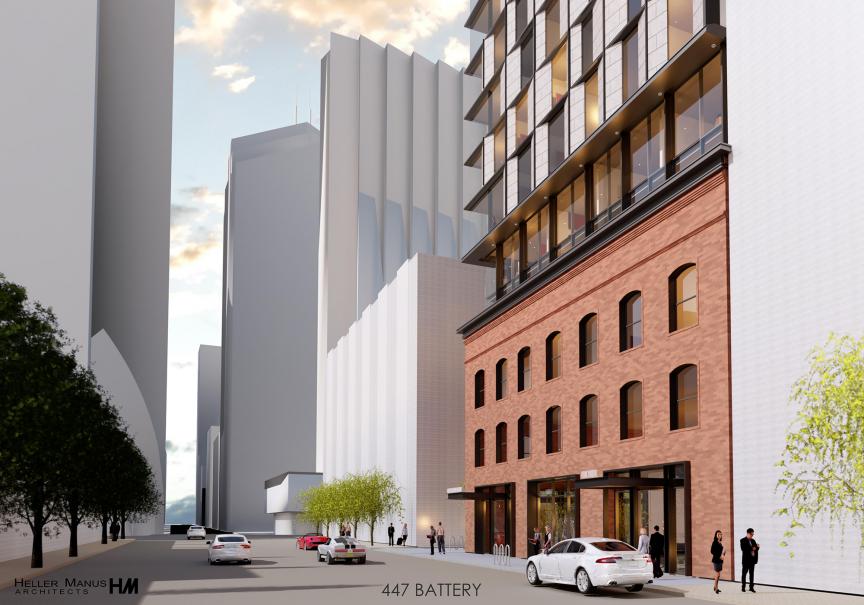 A new hotel in the already luxury hotel-dense neighborhood two blocks east of the Transamerica Pyramid is probably not going to affect your everyday life much, even if it does suddenly cruise to Planning Commission approval and speedy construction. But you are likely to at least walk past it from time. If the project is retaining its brick facade on the lower three stories, it is frankly kind of nice to see new developments retain some of their older, legacy features that we’re familiar with.

San FranciscoFinancial District
About 24 hours ago

Last week, the San Francisco Public Works Department replanted nearly half a dozen palm trees along the 400 and 500 blocks of Castro Street.

The aftermath of a 700,000-gallon water spill at the Stern Grove outdoor concert facility didn’t just cancel one show, it may cancel the entire Stern Grove 2022 concert season.