It’s an epic challenge: delivering brand-new, famously spoilable vaccines to an entire population that needed it yesterday. And with life largely on hold for the better part of the last year — and suffering seemingly increasing daily — the frustration is palpable during this gap between the arrival of adequate supplies of vaccine and its actual delivery to citizens.

The COVID vaccine rollout in Santa Clara County, and elsewhere in the state, has been roiled by shortages, scandals, and snags galore. And alongside the struggles, already-present debates over who should get it first are heating up, particularly with news this week that the state will use age as the key eligibility criteria once it starts vaccinating the general population.

This week, a delegation of county representatives made the case that vaccines should go to people from populations that have suffered the highest incidence and death rates from the disease. To this end, they propose allocation by census tract, a solution they say would recognize disparities that disproportionately impact communities of color and promote “equitable allocation of limited resources.”

“We write to urge that the California Department of Public Health develop COVID-19 vaccine allocation to counties with consideration by COVID-19 incidence and lethality by census tract,” the lawmakers wrote in a letter addressed to Gov. Gavin Newsom. 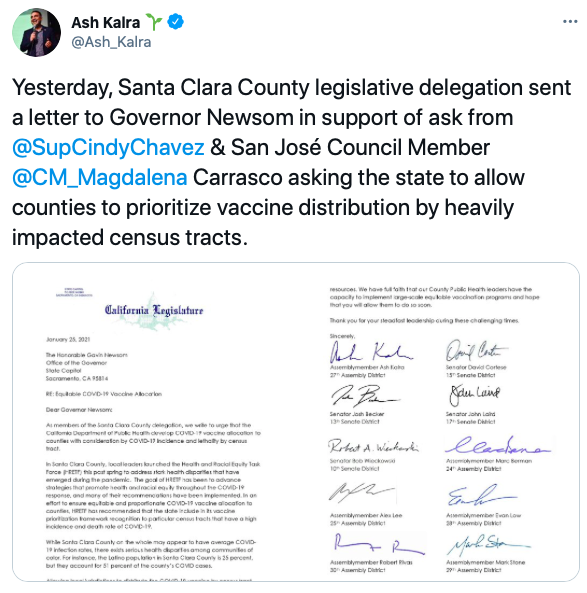 The letter cited the work of Santa Clara County’s Health and Racial Equity Task Force (HRETF), which the county tasked with seeking COVID-response strategies that support racial equity throughout the pandemic.

“In an effort to ensure equitable and proportionate COVID-19 vaccine allocation to counties, HRETF has recommended that the state include in its vaccine prioritization framework recognition to particular census tracts that have a high incidence and death rate of COVID-19,” the letter says.

The lawmakers point out that that Santa Clara County’s overall infection rates for the disease mask underlying disparities that represent unequal pain among its diverse populations.

“While Santa Clara County on the whole may appear to have average COVID-19 infection rates, there exists serious health disparities among communities of color,” declares the letter. “For instance, the Latino population in Santa Clara County is 25 percent, but they account for 51 percent of the county’s COVID cases.”

The lawmakers’ request comes as the state announced that age will be the determining factor for delivering the vaccine after certain frontline and essential workers have been vaccinated.

The new standard does not apply to the current phase, in which certain high-risk workers and all residents 65 and older are eligible. Rather, it dictates will be front of the line once the state starts vaccinating people under 65 who don’t fall into the narrow categories currently eligible.

Under California’s vaccine rollout plan, which follows national CDC guidelines, the vaccine is delivered according to phases that prioritize various high-risk groups. The first phase is relatively clear-cut, and calls for vaccinating healthcare workers and residents of long-term care facilities, whose astronomical death rates have made headlines during the pandemic.

The second phase, however – where we are now – includes a variety of different populations, leading to confusion and a marked lack of clarity around who is eligible when. Technically called Phase 1B Tier One, this stage calls for the vaccination of people 65 and older and those “at risk of exposure at work” in the sectors of education and childcare, emergency services, and food and agriculture – some 8.5 million people, according to the state.

In a bid to streamline the process after the chaos of this phase, Newsom earlier this week announced the shift to a single eligibility metric — age — after this phase is complete.

“Moving forward, there will be a single statewide standard and movement through the tiers,” reads the announcement from the office of the governor. “The state will continue through 65+, health care workers, and prioritize emergency services, food and agriculture workers, teachers and school staff. From there, the state will transition to age-based eligibility, allowing California to scale up and down quickly, while ensuring vaccine goes to disproportionately impacted communities.”

So far, more than 2.7 million Californians have received a dose of the vaccine — 151,440 of them in Santa Clara County — according to the state, and California has seen more than 3 million confirmed cases and 38,000 deaths.

After going out of business in 2020, Specialty’s Café and Bakery (and its beloved cookies) return to Mountain View

South Bay fans can again savor Specialty’s Café and Bakery’s legendary cookies (and more), after the company had shuttered all its locations and filed for bankruptcy early in the pandemic. Read More

Another innovative and ambitious project is now being proposed that could be a huge game-changer in the effort to revitalize and transform downtown San Jose. Read More

Something new called "The Energy Hub" is in the works that could dramatically transform the skyline of downtown San Jose. Read More

Two former students of Saint Francis High School and their parents are suing the prestigious, private, Catholic institution in Mountain View for $20 million dollars in what they claim was a case of mistaken racism that cost the teen boys and their families irreparable harm. Read More