The Haight’s safe sleeping site at 730 Stanyan St. is slated to close on June 30, 2021, but work to relocate residents is already well underway.

The site, which offers a space for up to 40 homeless residents to pitch tents and provides sanitation services and other resources, opened in May 2020 as part of the city's effort to offer shelter during the COVID-19 pandemic. As of Wednesday, May 12, 2021, 16 guests that had been staying at the site, which is slated to eventually become a 100%-affordable housing development, were transferred to other sites, according to the city’s COVID command center. The new locations for the Stanyan Safe Sleep residents “include other Safe Sleeping Villages, congregate shelters, and navigation centers,” the command center representative said. “We are no longer using the [Department of Public Health] rubric for referrals to SIP,” the COVID command center added.

Instead, people are “shelter-in-place eligible” and are being offered hotel rooms, so long as they meet San Francisco residency requirements and have a pre-existing condition that may make them more vulnerable to serious illness if they contract COVID, according to the COVID command center.

“Additionally, three guests are being connected with Homeward Bound, which provides transportation so guests may reconnect with their families outside of San Francisco.”

The site’s life was extended in March, and the June closure date may not be set in stone either. The closure was planned to allow soil sampling and other preparation work to start ahead of construction of the new affordable housing on the site. But as the San Francisco Examiner reported this week, the Mayors’ Office of Housing and Community Development (MOHCD), which owns the site, is considering delaying construction of the new affordable housing to accommodate additional units in the building.

As for other sites that were mobilized to provide safe sleeping opportunities, the Moscone West Shelter has had 30 residents relocated to new sites, and another 86 residents are being evaluated for SIP hotel eligibility, the COVID command center said.

City data suggests that more than 2230 individuals has been placed in a SIP hotel since the program launched in April 2020, nearly half of which were unsheltered before being offered a hotel room. There are 1977 hotel rooms currently occupied, out of 2,188 available for the SIP program. Out of 237 safe sleeping sites available in villages such as 730 Stanyan, 226 were occupied as of May 12, 2021. 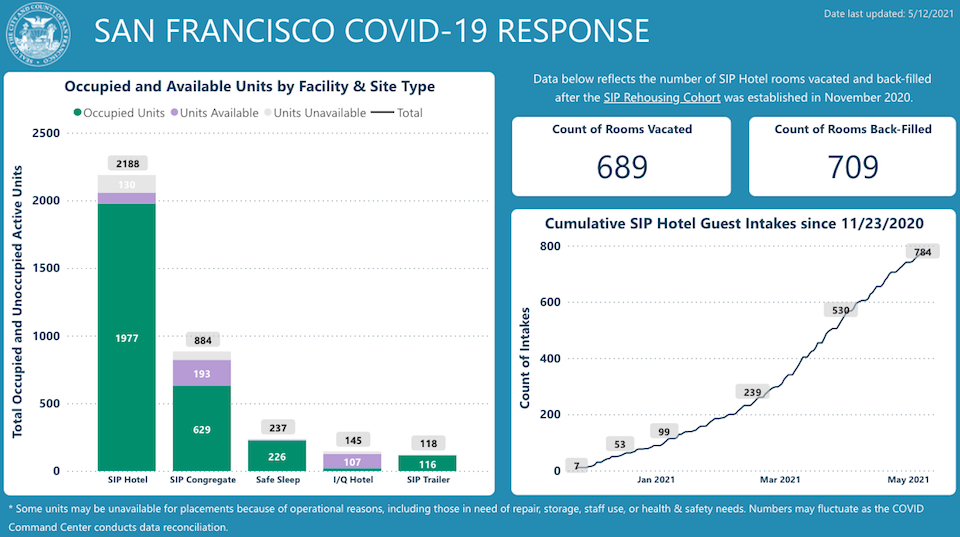 There is no announced closure date for other safe sleeping "villages," including the location in front of City Hall and the sites at 180 Jones (at Turk) and 33 Gough Street, according to the COVID command center.

It came to light in early March that the costs of maintaining these tent sites is exorbitant — and not less expensive than it would be to rent market-rate apartments for people. The city estimates that it is costing about $5,000 per month per tent to maintain these safe sleeping sites.

Meanwhile, the Department of Homelessness and Supportive Housing (HSH) announced in January that it is “laser focused on rehousing the pre-November 15 cohort of people out of the SIP hotels.” HSH’s rough estimates suggested that to rehouse everyone in that group of people, San Francisco will need 1,500 new units of permanent supportive housing (PSH), 1,500 placements into the existing PSH pipeline, 1,500 placed into existing PSH units where vacancies arise, medium-term housing solutions for adults, and “Expanded Problem Solving.” Once the pre-November 2020 SIP population has been rehoused, focus can turn to those who have entered SIP hotels since last November. So far, about 29% of the pre-November 2020 SIP cohort have exited their hotel rooms, according to city data.