Mother of fentanyl user speaks out: Protests and promises are not enough

Jacqui Berlinn was touched by the people who turned out at her protest in the Tenderloin this week, which highlighted the dangers of fentanyl and its impact on the neighborhood.

“A lot of people really have no idea how bad it is,” Berlinn told us. “There is nothing going on to stop the open air drug markets, and people are coming here from other states just so they can use.”

But many of the attendees at her protest do understand the magnitude of the issue. Several community members recalled losing loved ones and Berlinn was grateful for them joining her to shine a light on the situation.

Her organization, Stop Fentanyl Deaths, was co-founded by Michael Shellenberger with one major goal: getting people with power and money to listen and start doing things that actually change the drug dealing situation in California.

“There are too many competing efforts that are too small, and they are working against each other,” she said. Mental health issues are often at the base of a drug addiction, and there is no process in place to address those underlying conditions, she said. 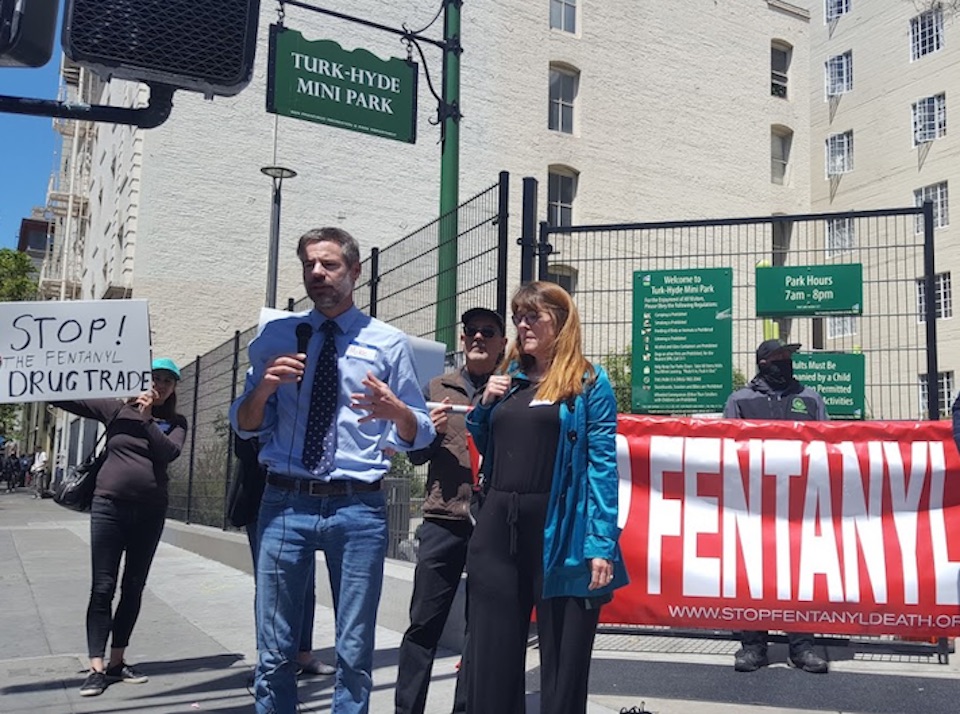 Berlinn told us she formerly worked as a sheriff’s technician in a county jail and witnessed the impact of incarcerating people with mental illness.

“I think it is horrible to incarcerate people who are mentally ill,” she said. "They suffer in jail, and then they’re back out on the streets without their medication, so it just becomes a cycle."

Her son, Corey, has been in and out of the criminal justice system for 10 years, and has never once had any mandatory rehabilitation or treatment ordered, she said.

When he was arrested occasionally, it gave Berlinn a chance to find him, but now that doesn’t even happen anymore. Only once, about two years ago, he was sent to a halfway house, which was unsupervised, to await a treatment facility placement. “It wasn’t fast enough… by the time a bed opened up, he refused to go,” Berlinn said.

“People can’t sit and wait when they’re this deep into using, especially with fentanyl.”

More recently, Berlinn saw a photo of Corey slumped over on the train, posted on the BART Rants and Raves Facebook group.

“It was very hard to read the comments, but when I told people ‘That is my son,’ it changed the conversation,” Berlinn said. “At least I knew he was still out there.”

This beautiful child is funny and kind but he made a huge misstep as a young adult and is now trapped in addiction. He wants to be free-he told me so. But our programs are not sufficient to deal with fentanyl addictions. Fentanyl should not be available on our streets!!! pic.twitter.com/nySFDLEtgK

Although she is grateful that District 6 Supervisor Matt Haney and District 11 Supervisor Ahsha Safai attended the rally, she said their promises about what would be included in the next San Francisco city and county budget “doesn’t go anywhere far enough.”

“Some people, like my son, will probably need lifetime care… at least counseling but probably other interventions, too,” Berlinn said.

She and Shellenberger are taking their protest effort to Southern California next, with a protest planned at Los Angeles’ Skid Row next Wednesday, June 2.

“We are just getting started,” Berlinn said. The next stop after LA will be Sacramento, she added. “We need an overarching mental health system in California… one little protest isn’t going to be enough.”

Her website, StopFentanylDeaths.org, and Twitter feed are the best ways for people to keep track of and join the effort.