FHMP and design team SWA Group shared renderings of the redesign after receiving public feedback during a virtual town hall in April.

“We believe the redesign captures the public’s desire to better honor Harvey Milk and creates one of the United States’ first ‘next generation’ memorials: one that will continue to represent the values of the local community through growth and change," said FHMP interim executive director Brian Springfield. "The Memorial at Harvey Milk Plaza will interweave the past and the present so that it serves as a call to action for generations that follow." 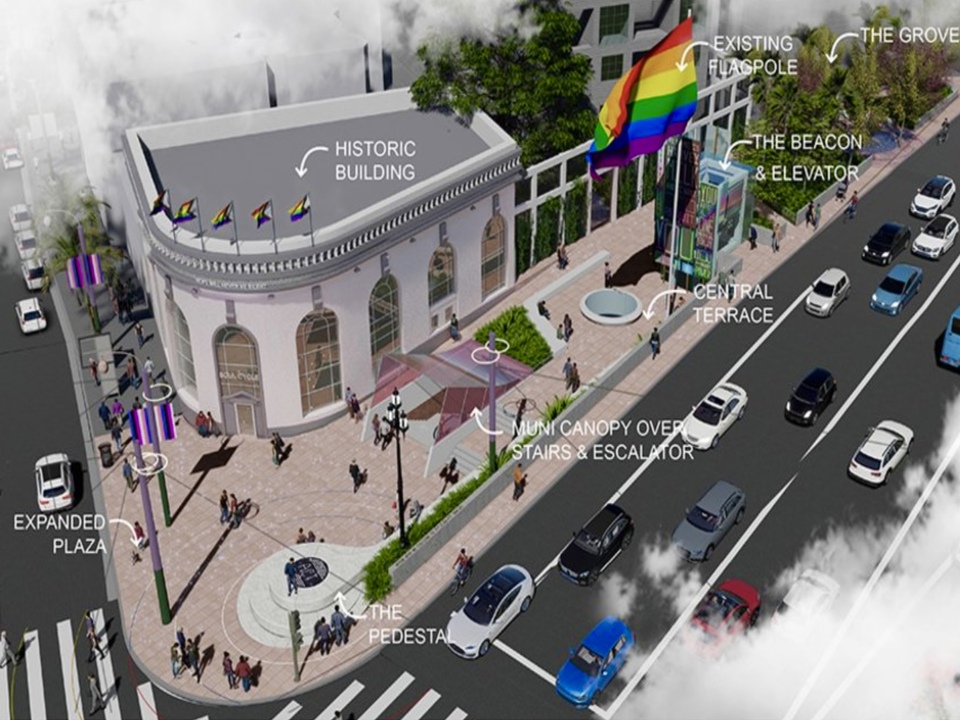 Overview of the design changes proposed by FHMP and SWA Group.

Design features include "The Pedestal," an elevated platform at the intersection of Castro and Market streets; "The Beacon," a digital display on the new elevator; "The Grove," a memorial tree grove close to Collingwood; and "The Gallery," an art display on the Castro Muni station mezzanine level.

Other design features include an expanded plaza area, a candlelight vigil light display, a pink glass canopy over the stairway and elevator, and an oculus lightwell.

Springfield emphasized that the new design being shared is preliminary and that FHMP and SWA will continue to seek input from the community.

“You’ll notice there is no bronze statue of Harvey to be found," said Cunningham. "The entire memorial acts as a stage, elevating the voices of the community,
and allowing it to evolve with the movement over time.” 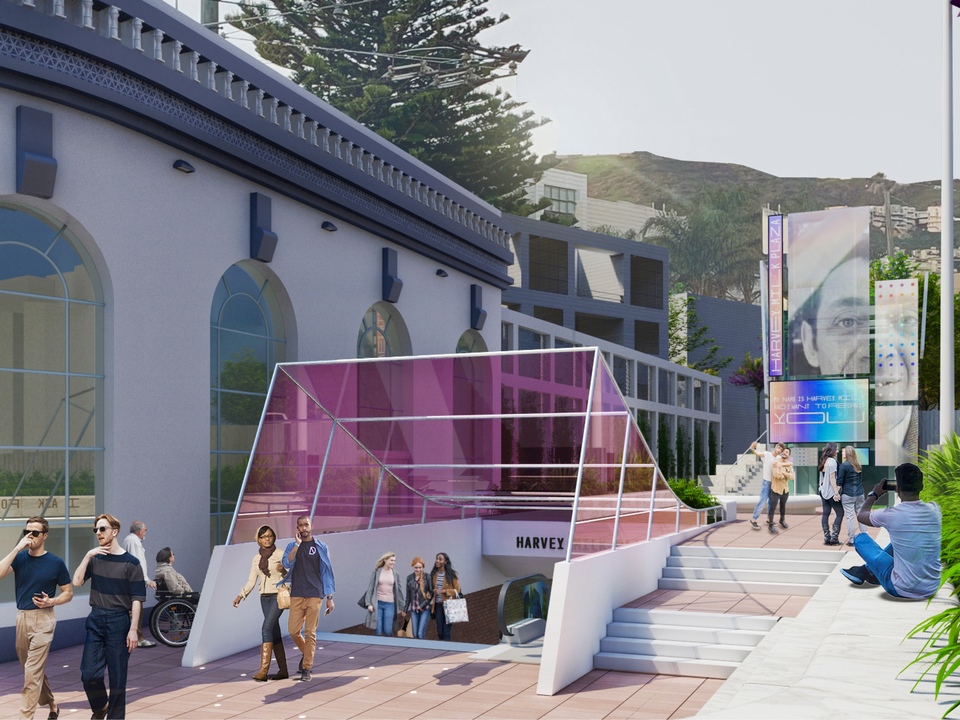 Canopy over the escalator and stairway.

Springfield anticipates the design being finalized this year and construction starting in Summer 2022. "Our goal is to be shovel-ready by next summer," said Springfield.

In order to avoid multiple construction projects in a row, Springfield would like to see the project align with SFMTA's separate $14.5 million, 18-month SFMTA Castro Station Accessibility Improvements Project which was delayed until fall 2021.

A new glass elevator will be constructed in the fenced-off area behind the plaza's display of photos honoring Milk. The project will also widen the sidewalk, replace the plaza's existing lighting, and regrade the pavement above Castro station to make it more accessible.

Earlier this month FHMP met with the Arts Commission for an informal meeting and is scheduled for the July 19 Civic Design Review meeting. 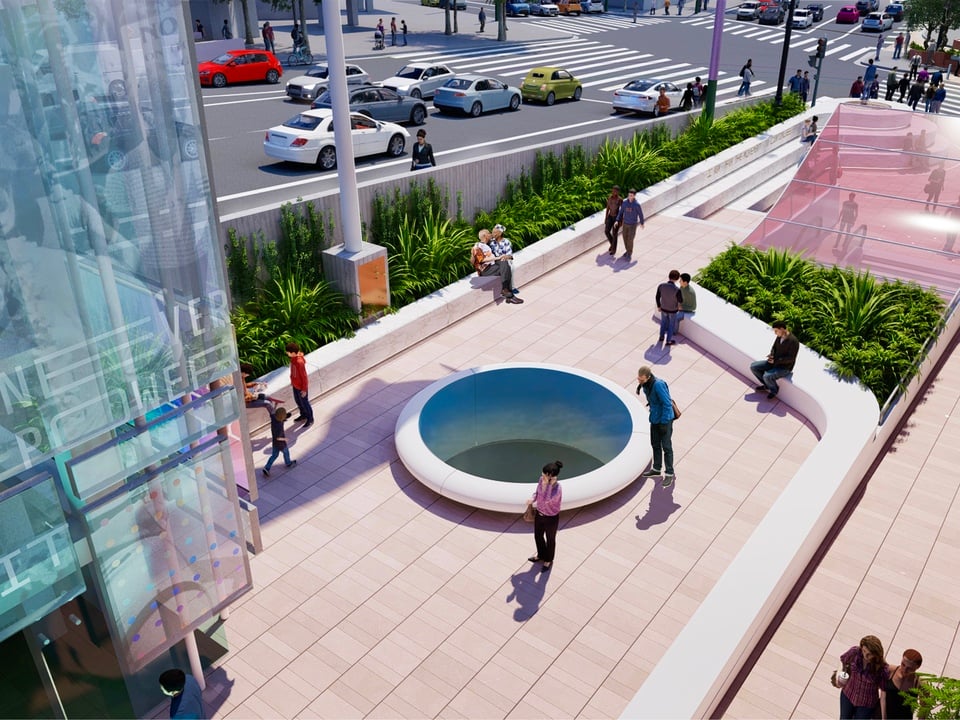 Oculus light well going down to the mezzanine level.

“Harvey Milk Plaza is at the heart of the Castro community — a place to gather, to go about our lives, and to remember Harvey’s many contributions," said State Senator Scott Wiener in a statement. "Our community deserves a plaza worthy of Harvey’s memory — one that educates and allows us to organize and enjoy our amazing neighborhood."

"The new design of the Harvey Milk Plaza does an outstanding job of preserving and sharing Harvey's legacy, while also creating a new and dynamic space for the community to gather," said San Francisco Mayor London Breed in a statement.

“Harvey Milk Plaza can be a space that both honors the history of the LGBTQ+ rights movement and lifts up the voices and struggles of today's queer community, all while functioning as an inviting gateway to the Castro and Muni,” said District 8 Supervisor Rafael Mandelman. 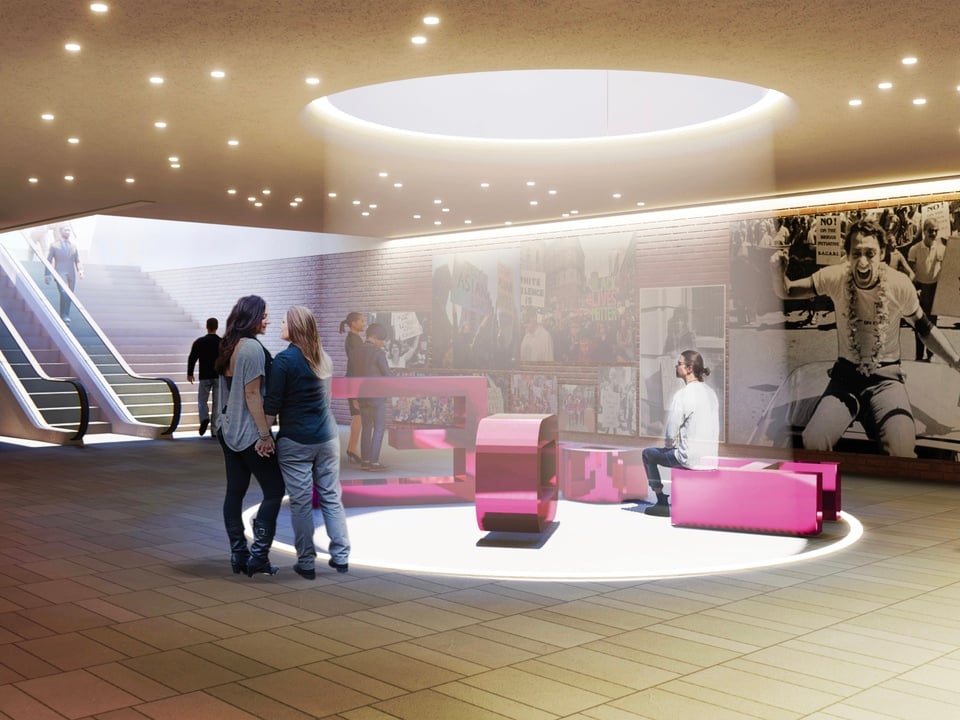 "The best public spaces are flexible and responsive to the needs of the communities they serve," said San Francisco Parks Alliance's Philip Winn. "The most meaningful memorials engage the public in a dialogue with the story and ideals of those we seek to remember."

"The balance between Harvey’s history and the movement’s history feels correct to me. Harvey would have liked it,” said photographer Danny Nicoletta.

Author and activist Cleve Jones concurred. "This design feels right to me,” he said. “The balance of hope and action, the call-to-action for activism, and the pieces that will allow visitors to feel seen and heard — this has many of the same qualities as Harvey himself."

During Wednesday's meeting, over 55 attendees shared comments and feedback about the proposal. An additional community meeting repeating the same information was held today. 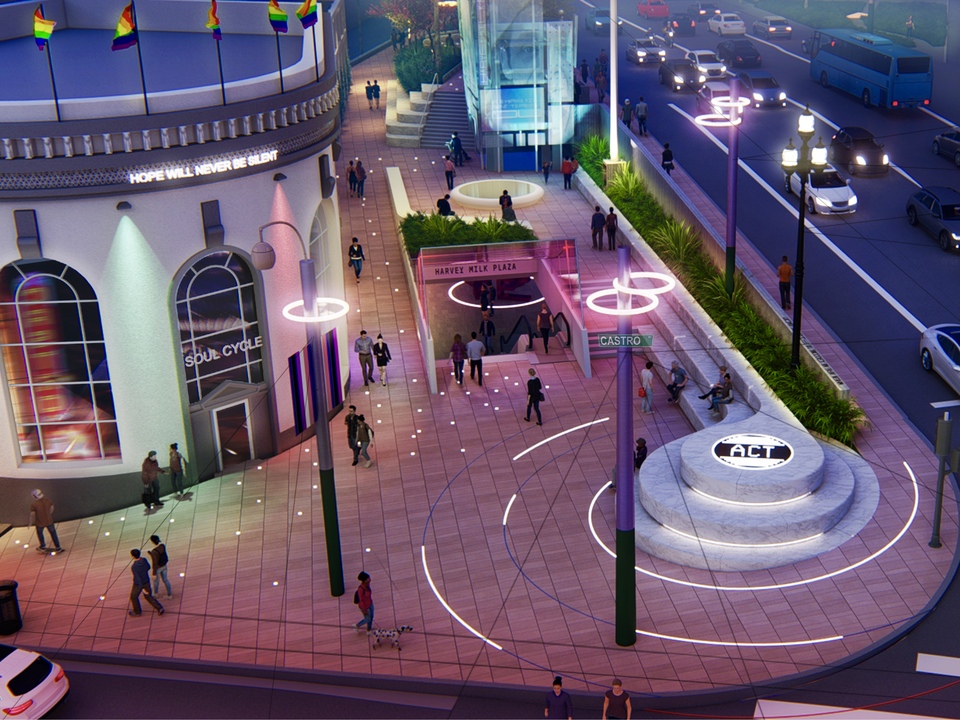 Candlelight vigil light display leading back to the memorial grove.

"Love the lighting elements, not only does this make it safer at night but adds a focus of allure and whimsy," said Castro resident Kyle Krainer.

"And I love that you rotate other community pride flags on Soul Cycle as we did in our In Their Own Voices exhibit at Harvey Milk’s camera shop," added Beal about pride flags above the former Bank of America Building.

Springfield acknowledlged that the flags were only apart of the rendering and had not been approved by Soul Cycle or Lawrence Cushman, owner of the building and major donor to the project.

When asked by a Hoodline reporter about the reduction in the size of the stairway Cunningham said that after resetting the stairway there will be nearly the same amount of accessible space.

Many attendees shared a variety of concerns about unwanted street behavior surrounding the addition of benches and potential areas for unhoused individuals to hide.

In response, Springfield acknowledged that homelessness is not just a Castro neighborhood problem but a city-wide issue. Springfield said FHMP has been working with city agencies including the Office of Economic and Workforce Development on finding solutions. 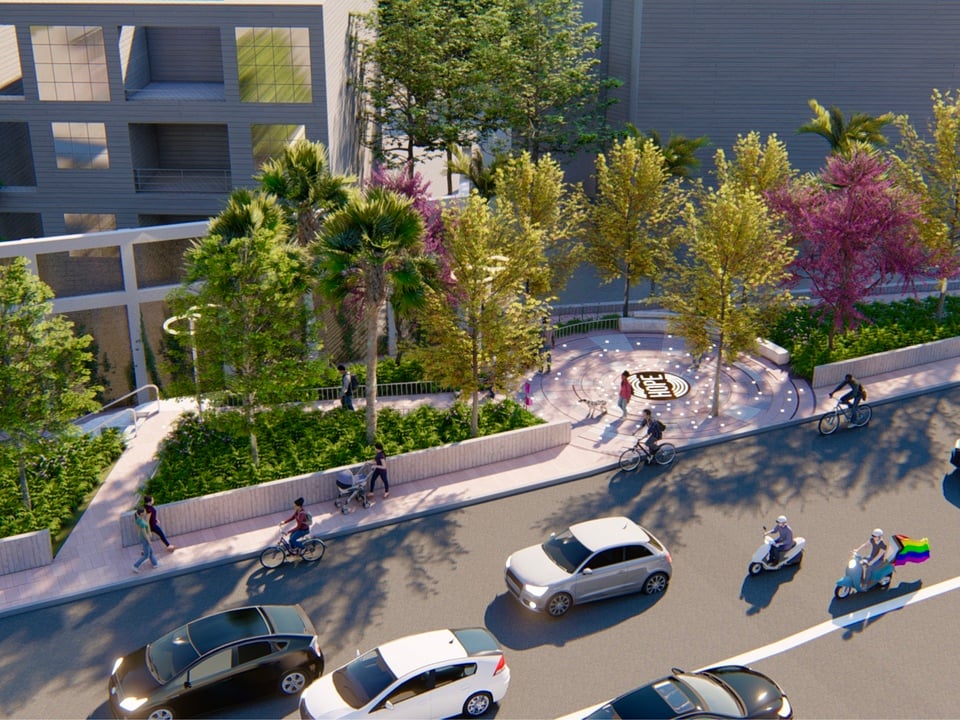 Memorial grove at the Collingwood St. side of the plaza.

One attendee asked why after four years the project is still in preliminary stages. "Nothing that has been shared so far has captured the public’s imagination," said Springfield. "This one does that and a lot of other things the community wanted to see."

"The Historical Resource Evaluation prepared and approved by the Planning Department concluded the two-level plaza was eligible for preservation since it retained its integrity of design, materials, and feeling," added Grant. 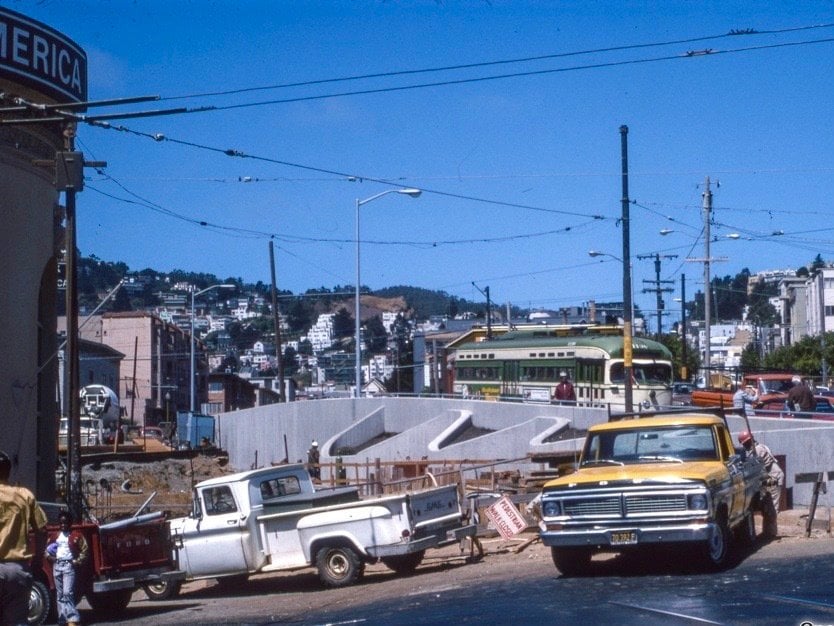 "Of course, after over 40 years of minimal maintenance it is due for improvements and refreshing," said Grant. "But as our group, Advocates for Harvey Milk Plaza, has repeatedly stated: it isn't necessary to demolish and replace the plaza in order to properly honor Harvey Milk."

When asked about the estimated cost of the project, Springfield tells Hoodline a formal project estimate will be done in a few months. Springfield said FHMP is using the elevator project as a benchmark. "Whatever the number ends up being, it will be based on what the community wants for the project," said Springfield.

According to Springfield, funding for the redesign will include both public money for infrastructure upgrades and private money for the memorial. Hoodline readers will recall in January 2020 the project was awarded a $1 million state grant. Additional funding will be raised through a combination of city grants, foundations, and private donors.

Continued community feedback is welcomed by the FHMP, and you can add yours via the public engagement platform Neighborland.