Local environmental advocacy organizations have raised concerns about a proposal to build a 350-unit apartment complex and 500-car parking garage on a tidal lagoon in Redwood City.

The project would permanently fill more than eight acres of the tidal lagoon, as well as dredging another six acres of some 100,000 cubic yards of dirt to use in the filling, according to a public notice from the U.S. Army Corps of Engineers, which has received an application from the developer for a permit to fill wetlands. The notice states that the project would also establish 4.8 acres of tidal wetlands and enhance 1.2 acres of existing wetland to mitigate the project's impact on the environment.

"This project will destroy wetland habitat, may result in release of toxic contaminants, and would put residential development in the path of sea level rise," said local advocacy group Green Foothills, which released a statement in conjunction with Citizens Committee to Complete the Refuge, Sierra Club Loma Prieta Chapter and Redwood City Neighbors United. "The Clean Water Act regulations state that a permit cannot be issued if a practicable alternative exists that would have a less adverse impact on the aquatic ecosystem. In this case, the alternative is obvious — the developer can choose a site for this apartment complex that is on dry land, not in the Bay."

Hoodline spoke with real estate developer Wallace Murfit, managing partner of Laguna Sequoia Land Company LLC, the applicant on the project. Murfit, who said he has 30 years of experience as a developer in the Bay Area, emphasized that the project will create housing. "Just as there is opposition from environmental groups, there is support for the project from housing interest groups," Murfit wrote in an email to Hoodline responding to the groups' statement. 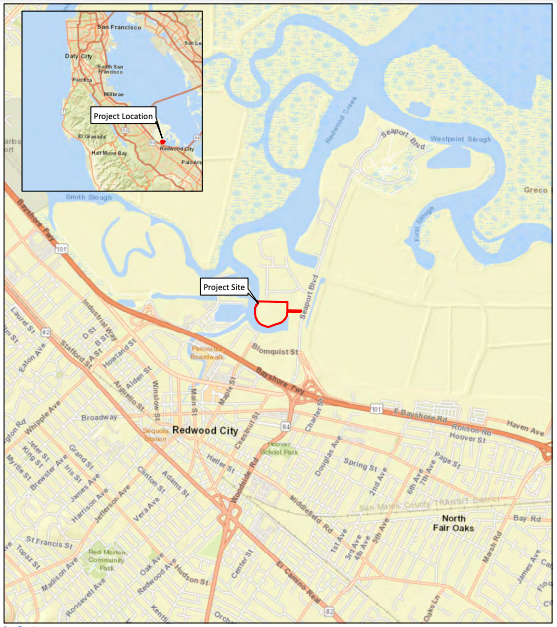 The site of the proposed development Source: US Army Corps of Engineers
San Francisco District

According to the Corps of Engineers public notice, the proposal would use 8.7 acres of the lagoon for development of the complex and a public waterfront park. The proposal also involves partially filling and grading an additional 4.4 acres of the lagoon to establish tidal marsh in areas that are currently mud flats and remnant slough channels, the notice states. 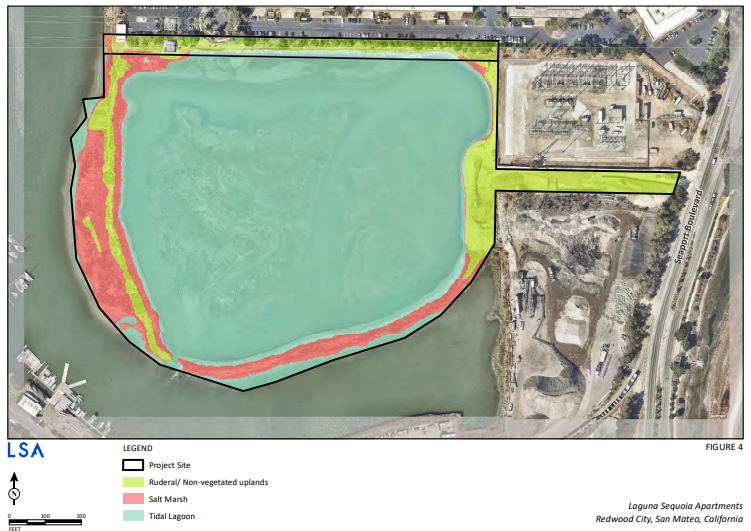 A view of the site of the proposed development Source: US Army Corps of Engineers
San Francisco District

The advocacy organizations also raised concerns about pollution from the development, as well as the site's vulnerability to rising sea levels. "There are high levels of mercury, PCBs and other contaminants in the sediments adjacent to the site ... and any dredging or excavation on the site could disturb those sediments and cause the contaminants to become mobilized," the groups stated. "Finally, the ... site is simply the wrong place for housing. The site is extremely vulnerable to sea level rise and is near to heavy industries and far from transit. The proposal for a 500-car underground parking garage seems like a particularly misguided idea for a site that is currently underwater twice a day."

Murfit responded that the development is in line with current Redwood City requirements regarding rising seas. "The City's zoning code anticipates sea level rise, and our project is designed to be consistent with the City's zoning code," Murfit wrote. 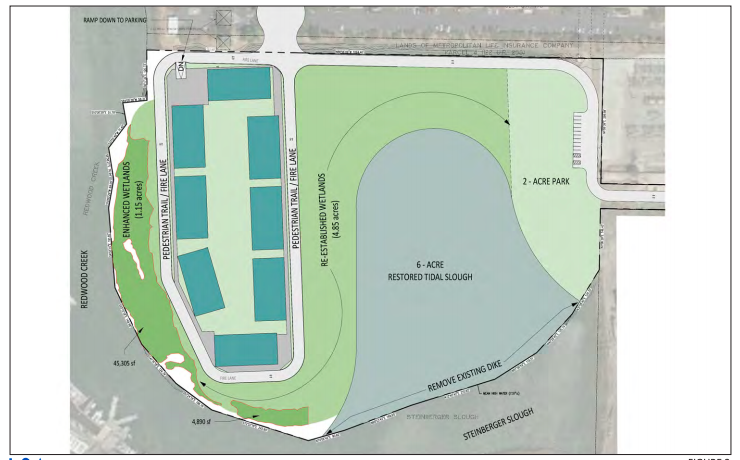 An illustration of the proposed development of the site Source: US Army Corps of Engineers
San Francisco District

"The Corps will be forwarding the Public Notice comments to the applicant for their response and then we will evaluate both the comments and applicant's response to those comments," Dr. Katerina Galacatos, U.S. Army Corps of Engineers San Francisco District Regulatory Division South Branch Chief, wrote to Hoodline in an email. The Army Corps of Engineers could not confirm Friday how many public comments it had received on the project.

If the Corps of Engineers and Water Quality Board both approve the project, the next step will be for the developer to seek approval from Redwood City.