The closure of the 100 block of Golden Gate is supported by other non-profits, including Code Tenderloin | Photos: Carrie Sisto/Hoodline
By Carrie Sisto - Published on August 16, 2021.
San FranciscoTenderloin

The St. Anthony Foundation is leading the effort to create the Golden Gate Greenway, a block-long full closure of the avenue between Leavenworth and Jones streets, to provide new community space in the Tenderloin.

The street is already closed from 6 a.m. to 3 p.m. daily, after St. Anthony's was forced to move all of its services outdoors during the COVID-19 pandemic.

“The lines would wrap around the block and overflow the sidewalks,” St. Anthony’s chief of staff Emma Jarvis told Hoodline. “You can’t have cars flying by” past those types of crowds, she said.  All of St. Anthony’s services — from its free clothing program and its tech lab, to its food bank and offerings of prepared meals — were moved outdoors to improve safety for the workers, volunteers, and those in need. 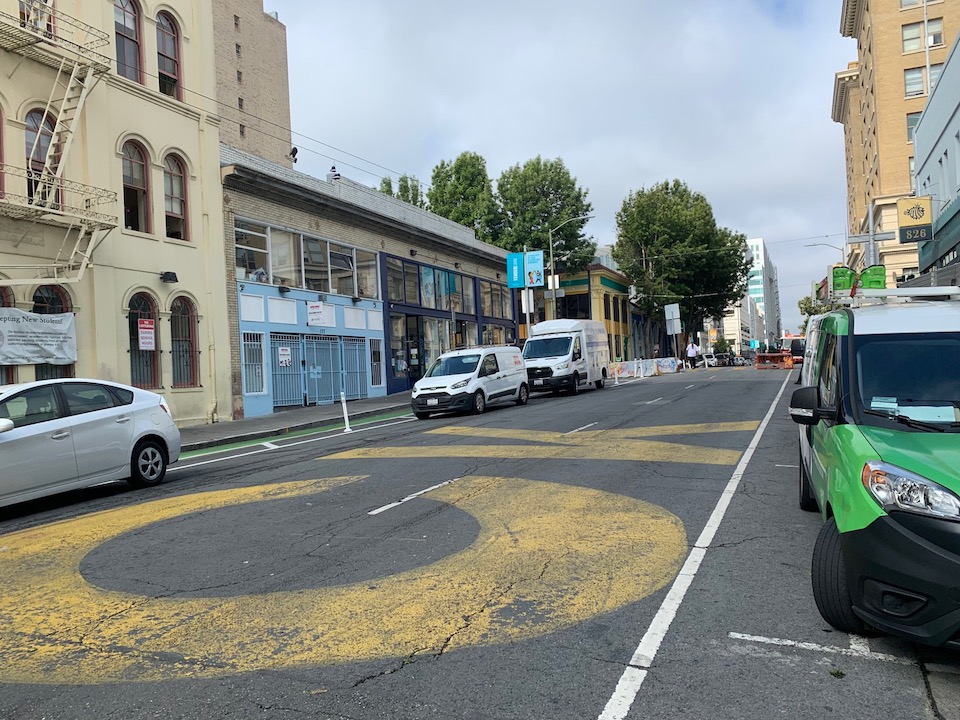 A view of the 100 block of Golden Gate, during the street's closed hours, looking toward Leavenworth Street.

Most of the services are now able to operate indoors, as long as masks are worn, but St. Anthony’s and its community partners continue to activate the street.  They offer play streets on the second and fourth Saturdays of each month, and host other events such as mobile free veterinary care services and mobile libraries.  The Foundation’s buildings on the block are surrounded by other community-focused non-profits, such as Larkin Street Youth Services and 826 Valencia, as well as senior housing and residential buildings.

“The pandemic gave us an opportunity to re-evaluate how much space is given to cars, and reconsider how to prioritize how we’re using space,” Jarvis said, adding that the 100 block of Golden Gate was more like a four-lane highway before the closure began.

The current vision for the Golden Gate Greenway would break the block into sections that cater to different age groups.  It would provide a play area for children, and spaces for neighbors and nearby workers to meet, or even just rest, Jarvis said.

“People get moved around a lot in this neighborhood,” she added. "There are no benches and very few shade trees." 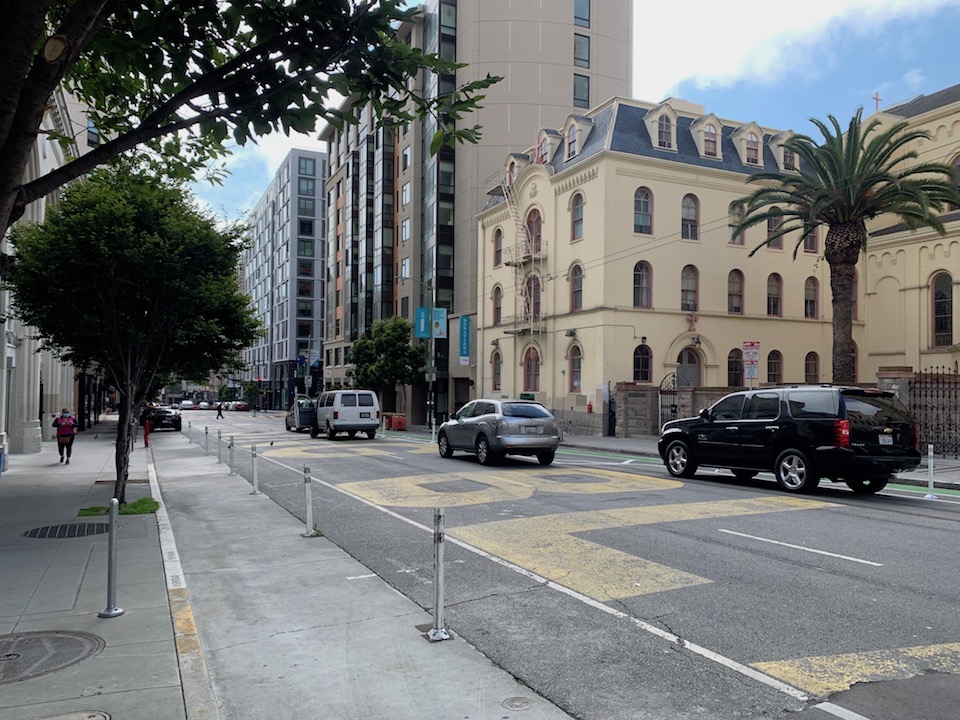 View of the 100 block of Golden Gate during the street's closed hours, looking toward Jones Street.

Across the street, the De Marillac Academy is open again as of last week, Jarvis said.  Currently, kids at the school, or in the nearby residential buildings, have to trek up Jones to Boeddeker Park, or over to the Helen Diller playground at the Civic Center.  It might seem like a short walk to many, but for a tiny kid with short legs, the walk takes a while and cuts into their playtime, Jarvis said.

Plans for the Golden Gate Greenway are still in the early stages, but the San Francisco Municipal Transportation Agency (SFMTA) has been very supportive, and St. Anthony’s has received positive support from city partners, according to marketing communications manager Cori Brosnahan. Community partners, including the Tenderloin Community Benefit District (TLCBD), Livable Cities, Friends of the Urban Forest, the SF Bike Coalition, and the Tenderloin Safety Taskforce, have joined St. Anthony’s and the other non-profits on the block for biweekly meetings to collaborate, Jarvis said.

“We don’t typically take public funding, so it’s been great to have partners that know how to coordinate the ins and outs of city processes,” she added. TLCBD recently opened the Tenderloin's newest park on a nearby block of Turk Street, after months of hosting successful Play Streets events.

There are lots of ins and outs to consider for the one-block stretch of Golden Gate Avenue.  Muni’s 5-Owl line runs on the block nightly, the fire department needs access to and through the Greenway, and the school and kid-focused programs nearby would like to maintain drop-off and pick-up hours.

Outreach to consider the design of the greenway is being focused on the neighborhood, first, because the final design should be guided by what the neighborhood needs, Jarvis said.

The foundation has advocated for new park spaces in the Tenderloin in the past, hoping to create a space that people can come to and gather and interact, Brosnahan said. St. Anthony’s already provides safety services from 6 a.m. to 6 p.m., largely staffed by people familiar with the neighborhood, which aim to focus on de-escalation and resolution, Brosnahan added.  If the full block closure occurs, those safety services could expand to 24-hours, she said.

St. Anthony’s had design boards up at its most recent Play Streets event, on Saturday, August 14, and will show them at the first September Play Streets, set for September 11, 2021.  The design boards will also rotate through the neighboring non-profits and residential buildings, to get feedback from those who live and regularly visit the block, Jarvis said. Once a few final designs are drafted, they’ll be provided online and to SFMTA for consideration during a board meeting, hopefully in early 2022.

After the Golden Gate Greenway gets approval from SFMTA, the foundation and other partners will launch a capital campaign to implement it, Jarvis and Brosnahan said.

“The dream is to make all of it happen, except for perhaps the rollercoasters the kids have requested,” Jarvis said, with a laugh.

“The greater the vision, the more likely people are to support it.”

If you’re interested in supporting the effort or learning more about the Golden Gate Greenway project, contact [email protected]