The debate over a possibly permanent car-free Great Highway has surprisingly become one of San Francisco’s more contentious debates of the pandemic period. But regardless of what happens in that ongoing discussion, nearly a mile of the Great Highway could end up going car-free anyway, thanks to a plan working through City Hall called the Ocean Beach Climate Change Adaptation Project. 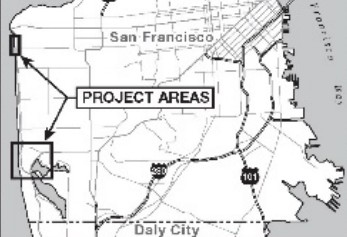 That project intends to address erosion issues in the southern area of Ocean Beach, and had its first informational meeting before the SF Planning Commission on Thursday. It was merely an informational meeting, there was no vote. But as seen above, that project would create a car-free zone in the area of the Great Highway within the lower square. Or in the words of the Planning Commission, “permanently closing the Great Highway between Sloat and Skyline Boulevards to public vehicular traffic.”

And even though it was only an informational meeting, you could be guaranteed that San Franciscans would have strong opinions on any roadway being rendered car-free. Because in this case, more traffic would be routed to Skyline and Sloat Boulevards.

“My neighbors and I are really against the rerouting of traffic,” said neighborhood resident Paul Patterson during Thursday’s public comment session. “The traffic backs up half a mile, the drivers are honking their horns, cussing and yelling, there’s a lot of excess noise. That intersection just can’t handle the load.”

And in another “only in San Francisco” quirk, the plan could also be derailed over concerns over a breed of little birds called bank swallows. Bank swallows are a state-listed threatened species, and this adaptation project would remove 500 feet of their habitat and breeding area.

Commissioner Kathrin Moore insisted on “knowing a little bit more about a sand-burrowing bird I had no idea about.” She added, “I’m fascinated by realizing that this is a unique habitat on the coast of California, and I think it serves a little more in-depth description.”

The Ocean Beach Climate Change Adaptation Project is scheduled to go back before the Planning Commission at a yet-unscheduled meeting.