frances-sf.com
By Genevieve Brennan - Published on May 16, 2013.
San FranciscoLower HaightCastro
Many Lower Haighters know the Castro restaurant Frances for its delicious and unpretentious food (bacon beignets!), its top-notch service, and how hard it is to get a reservation. Few realize that the award-winning chef and owner, Melissa Perello, lives in our midst.

Eleven years ago, after a long citywide search for a home, she wound up buying the first place she had seen -- a TIC near Page and Fillmore. She even redid the kitchen herself before opening Frances. A sledgehammer-wielding chef? How very Lower Haight. "Between [working at] 5th Floor and the three years it took me to get Frances open, I was doing private dining stuff, but not really working," Melissa tells us. "So I took advantage of the time and my dad came out for a while and we gutted and rebuilt my kitchen. It's fun. It's educational, you learn the process." This experience came in handy recently at Frances, which just underwent some renovations. "We're not able to add any seats," Perello reports [Ed.: dangit], but "We made some modifications in our kitchen and added some new details to the dining room, including a new art installation by ReCheng Tsang - a porcelain artist based out of Berkeley." Finding a space for Frances so close to her own home was just luck, Perello says, but she admits that she drives to work. "I shop at the farmer's market three days a week, and I'm always buying other random stuff for the restaurant, so I'm always shlepping stuff. There are crates of produce in the back of my car right now," she says, laughing. She also notes that she needs to buy a new bike - anyone have suggestions for a chef hauling ingredients? The Lower Haight, Perello says, is definitely different now than when she moved in. "Nickies was a change, it got a little bit more upscale, if you can call it that. When Uva came it was a big difference, and Maven has been a big tide change. I love the direction of what's going on around here." In fact, Perello says, "I'm thinking about starting to think about Frances #2. I love Nopa, the area and the restaurant both, and everybody wants me to look in that area, but it's becoming saturated. I think there's interest in what's going on here" in the Lower Haight. What does the Houston-raised chef have in mind? "I'm looking to replicate [Frances] on a larger scale. I'm just contemplating it. 18 months into Frances" - which opened in 2009 - "I was like, I'm never going to do this to myself again, this is torture. It was hard. But now the kinks have been worked out and the systems are in place and I'm finally taking a deep breath and thinking it would be fun to do something else. I'm sure I'll curse myself." So no promises, but Perello's goals when she began planning to open Frances are a good indicator of what she might look for in our fair neighborhood. "My biggest focus in looking for a space was finding something that had a neighborhood feel, that wasn't too big, and was in a cute area." Connecting with the locals was also on Perello's agenda. She says they have a strong base of regulars who have been coming to Frances since day one. "I came from a fine dining background, special occasional dining where you see someone once a year. To see the same people, the same faces on a regular basis is a pretty cool feeling. They become part of our family." 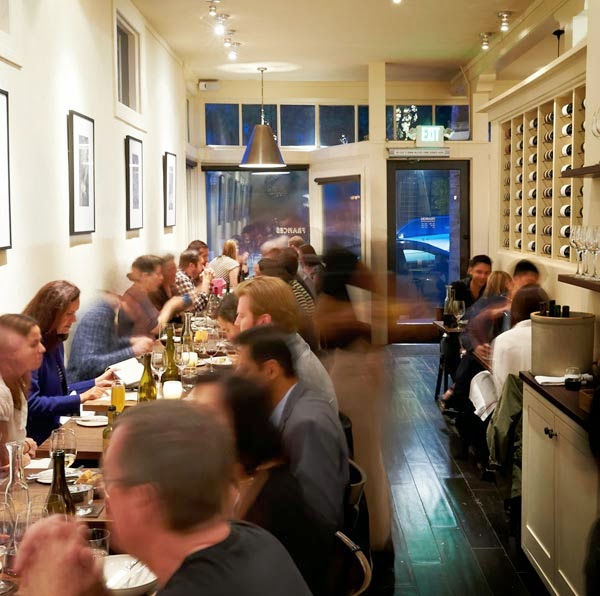 frances-sf.com
Despite all the accolades Frances has gotten, pretension is not in its DNA. "I would never put on my menu, 'Substitutions and alterations politely declined'... I don't fucking care if you want the vegetables that are on the beef with the fish. If you want something I think would taste horrible together, I don't care, whatever, that's what you want... What you do as a restauranteur is you aim to please people, to give them what they want to have a great evening. That's what they come and pay for..." Perello adds that the dining experience shouldn't be a challenge, either. "It's not about, how should I eat this dish? It's not, the chef recommends you first dip your fork in this specially seasoned salt. I'm not into that. I'm not one of those chefs who's there to put art on a plate. I love cooking, I love cooking the food I would want to eat on my night off." And where does she eat on her night off? Aside from Nopa, she's a fan of Rich Table, Zuni, and takeout salads from Ragazza. So, aside from another restaurant of her own, what would Perello like to see more of in the Lower Haight? A really good restaurant-slash-wine bar, maybe. But, she says, "I wonder what the people in this neighborhood want. That was a big thing for me going into the Frances location. We're just off Castro, close to the Mission, it's a cute little neighborhood spot, but there's no parking, it's not very big. What do people want from us? I think it would be the same moving into this area. What do people need? What services do we need to provide? Give people what they want and they'll come."
San FranciscoLower HaightCastro
13 minutes ago