Everyone’s favorite Monday night party turns five this month, and it plans on keeping weekdays soulful for years to come.

If you’ve ever walked by Madrone on a Monday night, you've no doubt seen the serious line wrapped around the corner, chock-full of soul music aficionados that just can’t get enough of the (in)famous weekly throwdown known as Motown on Mondays  (MOM). We stopped in for a moment to learn a bit more about the party itself, and the masterminds behind it.

The brainchild of Donovan Hall, better known as DJ Gordo Cabeza, MOM has been a weekday institution at Madrone since April 10th, 2009. About 8 months later, Tim Ryan (DJ Timoteo Gigante) signed on with him and the two of them ran the party until about a year and a half ago when their buddy Malachi Pearson (The Captain Hat) joined as the third member of the team.

Hall originally came up with the idea for the party as an homage to the Detroit soul music of the 1960’s, a genre he was raised on as a kid. According to Hall, he was getting a lot of gigs playing music he wasn’t that into and this was a way for him to play some tunes that really spoke to his, er, soul.

“For me, I was reconnecting to the music I was listening to as a child. I thought [the party] would be a great, relaxing escape,” said Hall as we chatted while the team prepared for the evening’s festivities. In fact, the evening we caught up was the unofficial five-year anniversary party for MOM. The big to-do is scheduled for May 3rd at The Independent, with several guest acts playing from within the MOM family.

The party itself is perhaps the biggest night Madrone has each week. Attendance is always at capacity and the soiree helps generate some serious business for owner Michael “Spike” Krouse. Since its inception, MOM has drawn an almost cult-like following. They get started at 6pm in order to cater to the folks who are just in it for the music itself and don’t necessarily want to tie one on. However, for those who are interested, they keep the place jumping until 2am—and it really is a heck of a time, especially for a Monday night. 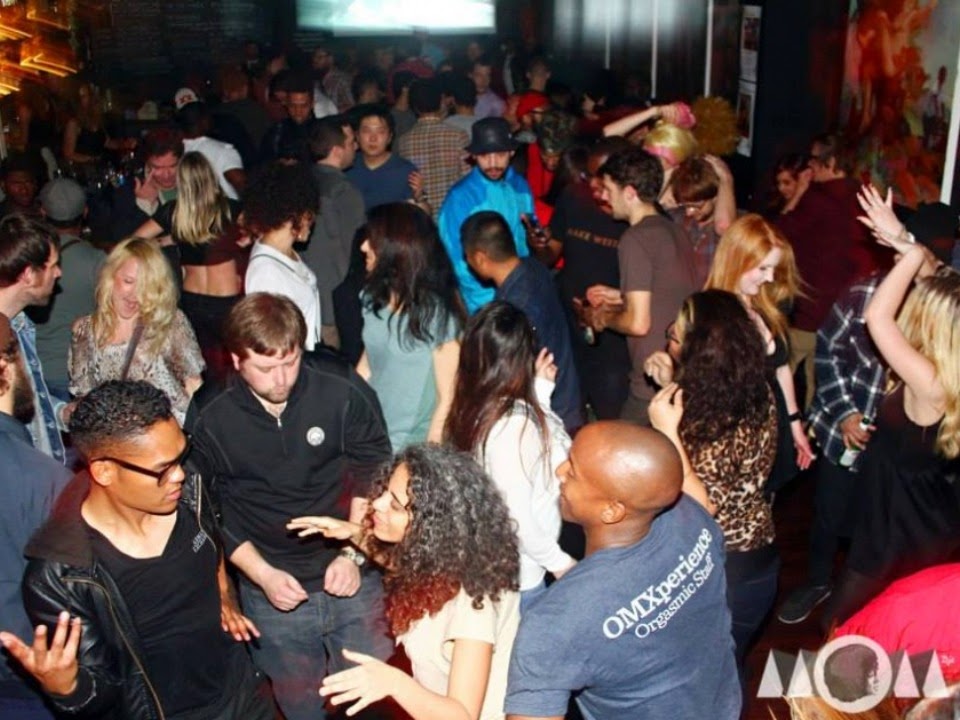 “I think we’ve definitely gotten a few people fired,” said Tim Ryan in regards to lively atmosphere his party fosters. Hall then chimed in, “Yeah, I think we’re probably responsible for some lost jobs and some babies.”

All joking aside, the intention behind the MOM is about creating a great, soulful, experience. Hall cites his mother as the person who really got him into soul music in the first place, and seeks to create a family vibe at the party, making the evolution of the event into being called “MOM” all the more fitting. The group feels that by using this tag line, they are also able to expand the genres from which they draw their tunes, allowing them to play more than just strictly Motown.

As a result of the wild success they’ve experienced, MOM has franchised itself to many other cities. You can now find MOM nights in Oakland, LA, Honolulu, Chicago. Austin, Denver, San Jose and NYC. And although the party may have expanded, the vibe at Madrone (the original one) is just as strong as ever.

Basically, these guys just want to have a good time. As Hall puts it, “It’s a family thing. I want everyone to be happy … I want everyone to benefit from the night so they have an interest in coming back.” On top of that, MOM has also donated thousands of dollars to both Casa De Las Madres and onemama.org. Their generosity clearly gives credence to the fact that they really take the whole family thing very seriously.

The official Five Year Anniversary bash at The Independent is a few weeks away on Saturday May 3rd.  Admission is $20 and the MOM guys will also be releasing their newest album of remixes, making it a night not to be missed.

Ultimately, the folks behind what has now become a Monday night institution work pretty darn hard to keep their night fresh and the energy high.

“I feel like a lot of parties fizzle out because they don’t evolve. They become comfortable with their success and feel like they don’t have to work at it anymore,” said Tim Ryan. Here's hoping MOM continues to innovate and gain even more popularity in the years to come.