Rendering: Brian Spiers Development / SF Business Times
By Andrew Dudley - Published on April 16, 2014.
San FranciscoDuboce TriangleLower Haight
Last week, we discovered that plans were in the works to demolish the former home of Home restaurant at Church and Market, and replace it with a 7-story apartment building.

San Francisco Business Times reports this morning that the firm behind the plans is Brian Spiers Development, which is also behind the Linea building at Market and Sanchez, and another new building at 1600 Market (at Page).

According to the report, "Spiers negotiated a ground lease with the owner, who decided that housing might be an easier route than trying to find another restaurant tenant. The zoning and heights for the project are allowed under San Francisco's Market Octavia Plan, which encourages housing development in the area."

The building would feature 64 mostly 2-bedroom units, with some studios and 1-bedrooms as well.  They would range from 500 to 1,000 square feet, Spiers told the SF Business Times.  The site posted the above rendering of the building from design firm Arquitectonica, as well as this one showing the 14th Street view: 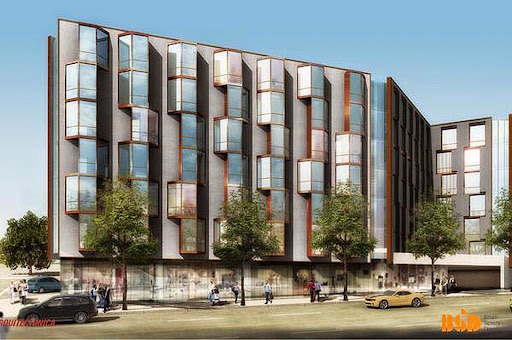 This thing's probably a year or two off at least, depending on what the Planning Department has to say, but we'll keep an eye on it.