The Dangerous Intersections Of Hayes Valley

Photo: Jared Schwartz/Hoodline
By Jared Schwartz - Published on July 10, 2014.
San FranciscoHayes Valley
While the removal of the Central Freeway in the late 90s and early 2000s brought many positive changes to Hayes Valley, the neighborhood still serves as a central artery for getting into and across the city.
Due to the heavy amount of car, pedestrian, and bike traffic, we want to highlight five intersections in the neighborhood we feel are either dangerous, difficult to cross as a pedestrian or biker, or notable due to their strange traffic patterns.
For example, Octavia Blvd is bumper-to-bumper during rush hour commutes. As a result, Haight, Page, Fell, and Oak streets all see cars backed up for several blocks while people wait to merge on and reach the freeway entrance.
Crossing Octavia in the morning as a biker or pedestrian can be a timing challenge as well. Unless you're at the corner of Page Street ready to go, pedestrians can barely walk across Octavia in enough time.
Cars, pedestrians, and bikers are all faced with a mix of one-way streets (some of which suddenly become two-way), along with intersections that only have three out of the usual four crosswalks. We often see people forced to take all three crosswalks to traverse from one side of Franklin and Fell to the other, for example.
And as we shared earlier this week, a petition has been created on change.org to install speed bumps  near Patricia's Green, as many fear that people or pets could get injured at any time due to speeding traffic.
With that said, check out the five intersections we've highlighted below and let us know what you think in the comments afterwards.
MARKET & OCTAVIA 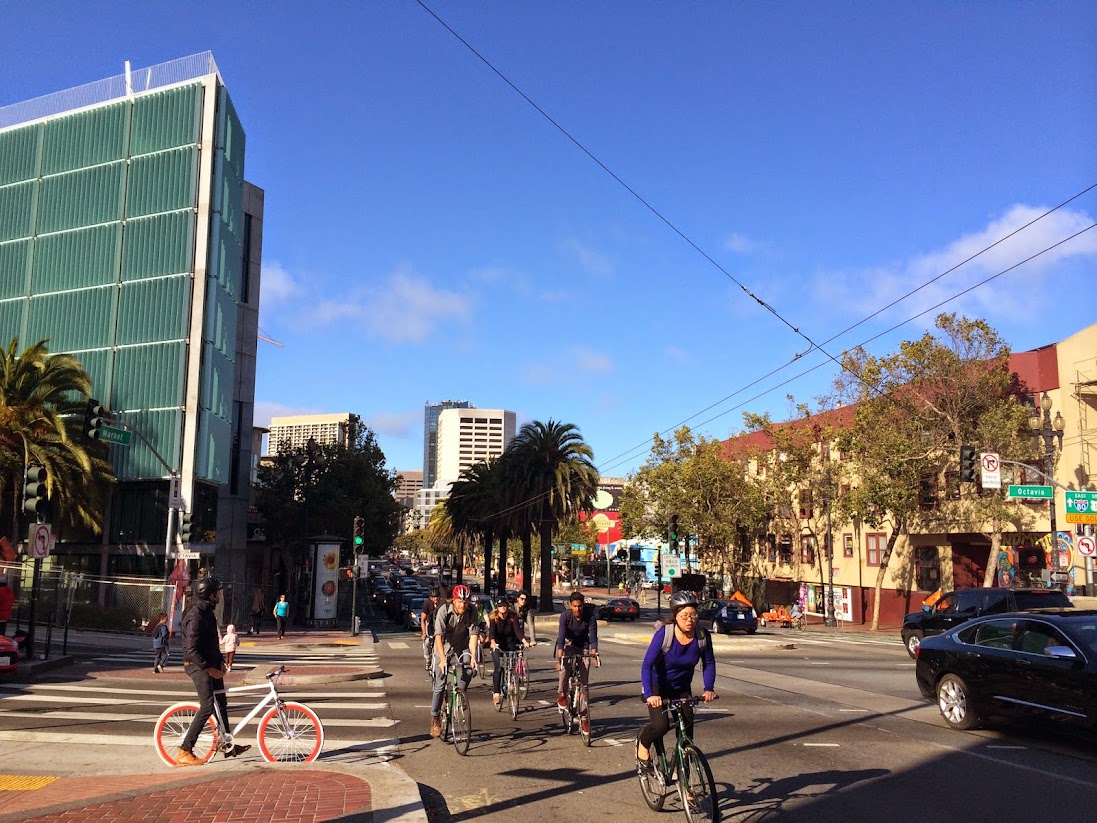 As the SFExaminer pointed out last October and SFMTA shared in a report in 2012, this is often considered the most dangerous intersection in San Francisco. Between 2009-2011, there were 30 injury collisions at this intersection, several of which involved fatalities. And out of the 13 injury collisions in 2011, nine were vehicle/bicycle collisions.
What's causing the problem? Well, cars can't turn right onto the Central Freeway from Market (but people still attempt it). Bikes riding on Market crossing Octavia do so alongside cars and have to dodge ones that either brake late or run the red light. Bikes riding on Octavia crossing Market can utilize side lanes and alleys on both sides of the intersection.
As of 2012, pedestrians now have giant painted crosswalks with time signals, but still often have to dodge cars (and sometimes bikes) that run through the lights.
MARKET, FRANKLIN & PAGE 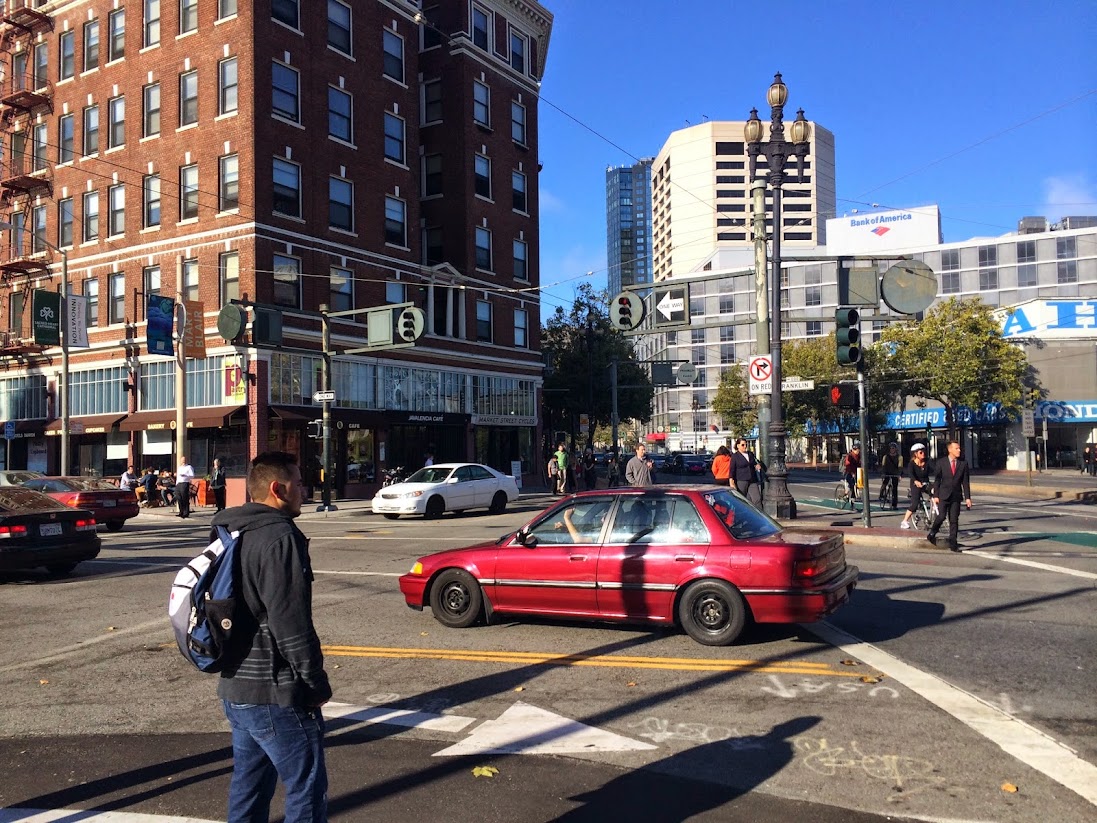 This complicated intersection brings a few major streets in our neighborhood to a traffic standstill. Cars wanting to head north on Franklin often underestimate the time they have to turn left from Market and get stuck in the middle of the intersection while pedestrians from Page try to cross Franklin and end up walking between cars in gridlock.
Pedestrians walking on Market deal with two separately timed signals. If you're walking north, the lights work in your favor and you can get all the way across. If you're walking south, you'll often get stuck in the small triangle for a few minutes until you can move again.
In addition, many bike riders use Page to get to Market and often compete for space with backed up cars (and the 6 and 71 buses) while they wait to turn left.
VAN NESS & FELL (VAN NESS & HAYES) 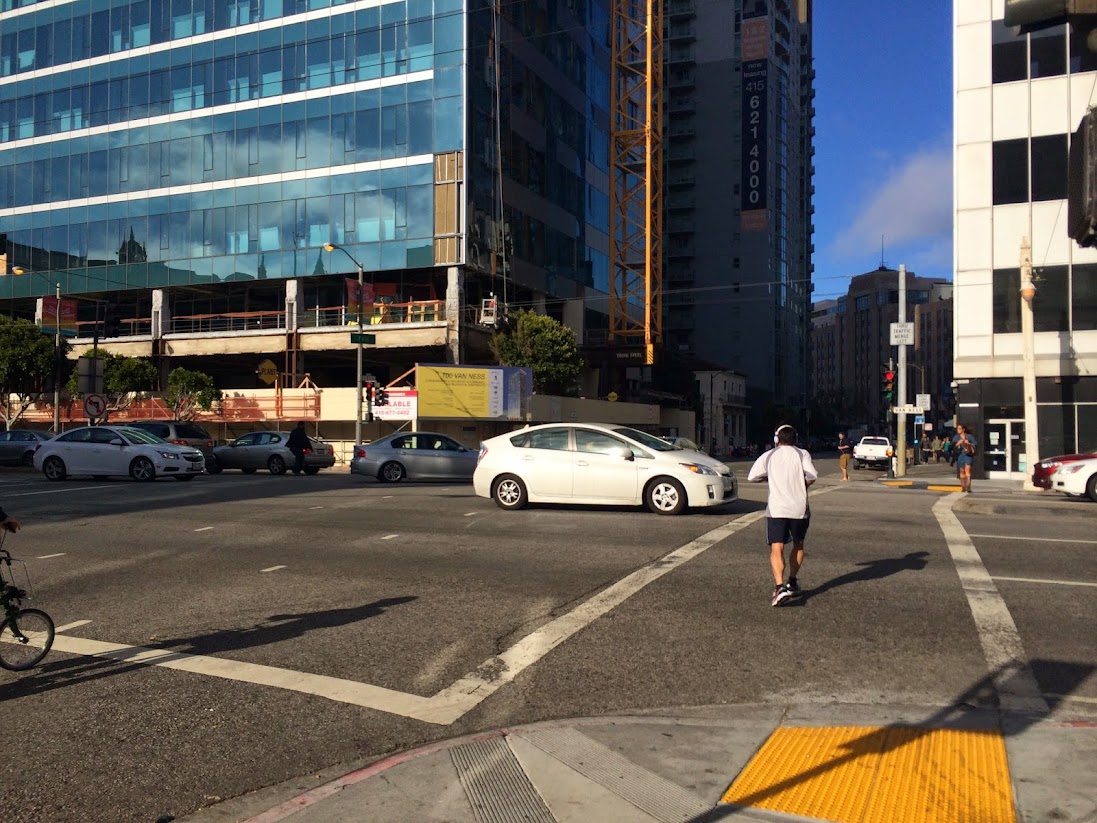 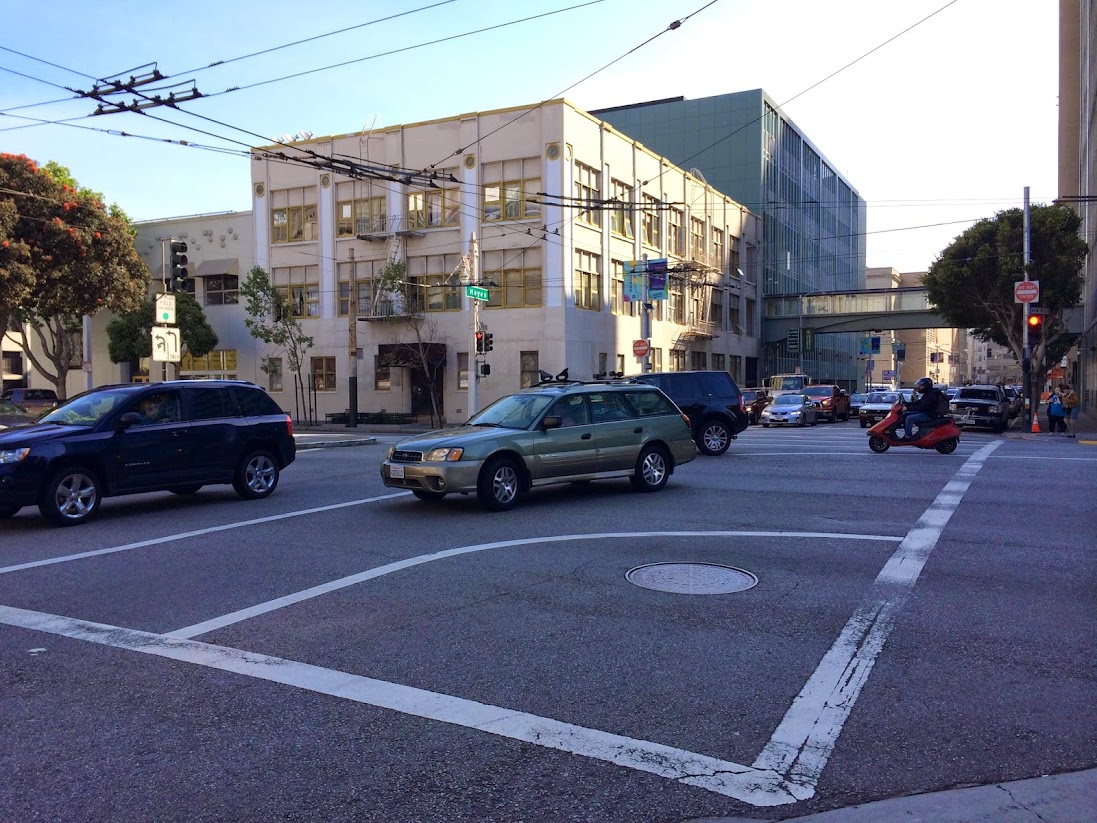 We're cheating a little and grouping these together because they have similar traffic patterns. Both Fell and Hayes are major streets in Hayes Valley with a huge amount of car traffic. Both have parts that are one-way only. And both intersections don't have signals for pedestrians crossing Van Ness, so people walking across Van Ness are left guessing how long they have until the traffic signal turns red.
HAYES & GOUGH 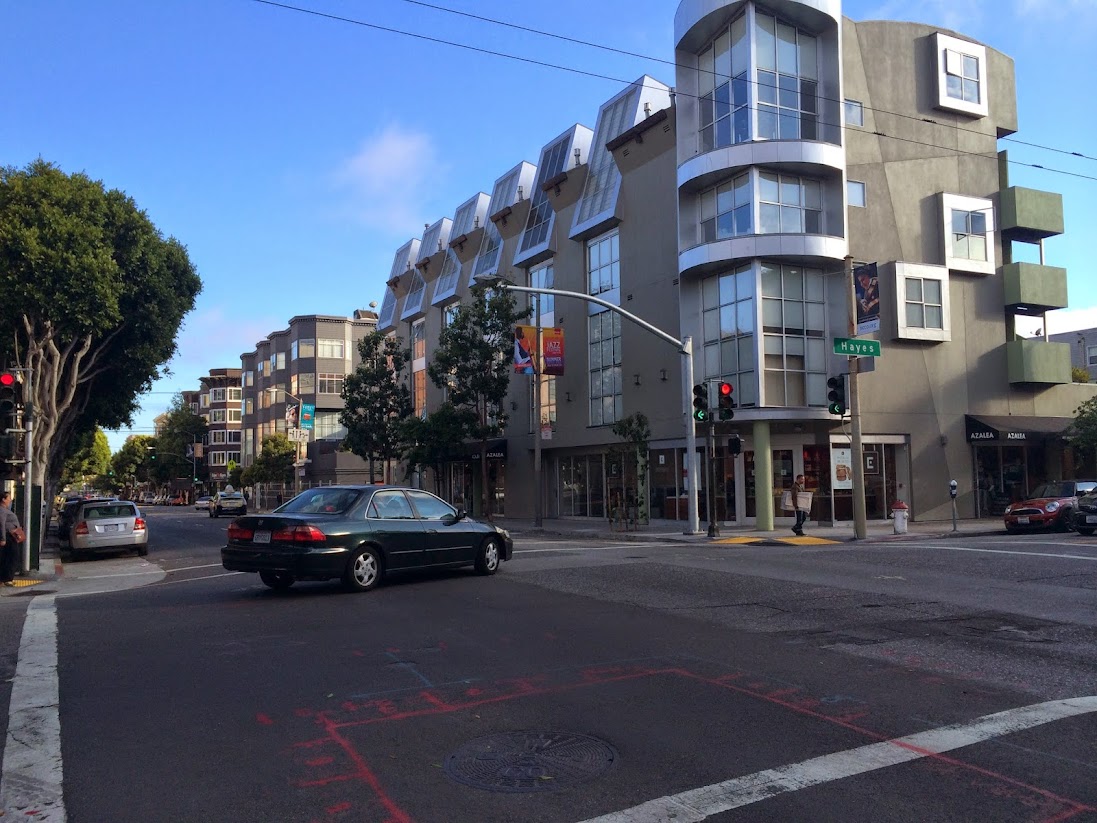 There are a few things that made us want to discuss this intersection. To start with, walking on Hayes Street across Gough on the north side (from Absinthe to Chez Maman) is often met with a surprise when you step down and realize how high the curb is from the pavement (not as high as the one outside Suppenküche, though).
There are handicap-accessible ramps to get from Absinthe to Caffe Delle Stelle, but not to go from Absinthe to Chez Maman.
And unlike other intersections in the neighborhood where cars get a left-turn signal during the last 5-10 seconds of a stop light, cars get to turn left onto Gough at the beginning of the light, before people can cross the street. Pedestrians are often found jetting into the intersection before realizing they're about to get hit.
OAK & OCTAVIA 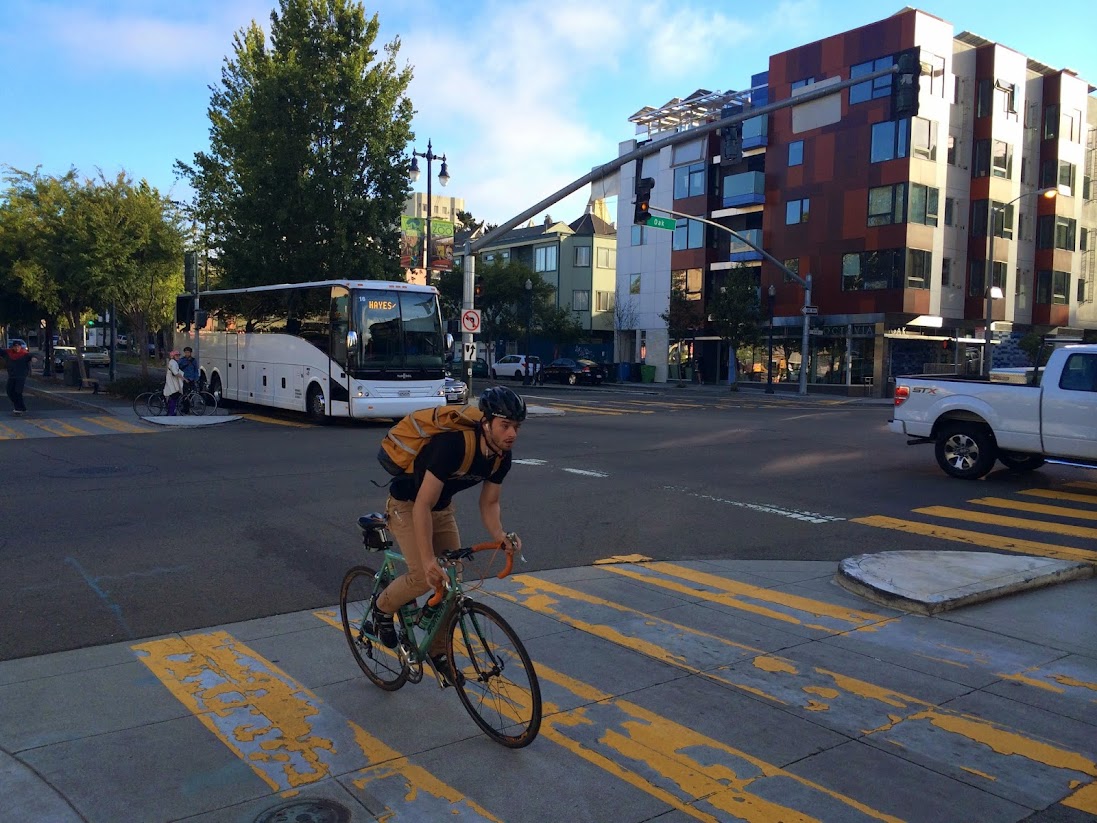 Getting onto Octavia from Oak involves cars backed up for several blocks in the right lane. Those who try to cut in at the last second create further problems and get honked at by everyone who either queued properly or is trying to go straight on Oak.
Walking on Oak across Octavia involves two different pedestrian light signals and four sections of lanes.
In addition, cars driving north on the central part of Octavia sometimes attempt to turn right onto Oak (or move into the right side lane of Octavia) without paying attention to people, bikes, or cars moving forward in that same lane. When we stood out here last night, we saw a car almost hit a biker doing that exact thing.
************
As we mentioned above, we wanted to highlight five intersections that immediately came to our minds. This list is by no means meant to be exclusive. And we also recognize that it's tough to navigate these streets as drivers, pedestrians and bikers.
We'd love to hear if you agree with the ones we discussed or would suggest different intersections to be included. If you have any horror stories from driving, biking, or walking across any of these intersections, please share them in the comments below.
San FranciscoHayes Valley
About 3 hours ago