An Update On Divisadero's Kava Lounge

Owner Alva Caple. (Photo: Stephen Jackson / Hoodline)
By Stephen Jackson - Published on September 17, 2014.
San FranciscoDivisaderoAlamo SquareNoPa
It seems as though the north end of Divisadero has been getting a lot of action lately. Between various happenings at Big Umbrella Studios, the opening of a new pizza joint, a shooting, and the announcement of Brenda’s Meet and Three, the stretch of the neighborhood just above McAllister street has been full of activity.
But what ever happened to that Kava Lounge that was supposed to open at 901 Divis this summer? We caught up with owner Alva Caple to find out the reason for the delay.
As it turns out, the answer is simple. Seismic retrofits have taken our herbmonger-in-waiting longer to complete than he originally planned.
According to Caple, the previous owner had started to bring the building up to seismic snuff before the 2017 deadline for city-mandated soft-story retrofits, but although some upgrades were made before Caple took over the space, he ultimately had to do about three months more work than originally planned in order to get up to code. This included putting in new steel-reinforced cement, re-doing walls and ceilings and adding more steel beams to the interior.
Though Caple didn't foresee doing this much work before gussying the place up into a relaxing, mind-bending lounge environment, he’s now ready to start transforming the space cosmetically.
Speaking of mind-bending environs, Caple shared with us some images he took of the lounge (very much under construction) at night. He’s chosen to leave the steel reinforcements exposed and add some accents with colored lights, as pictured below. 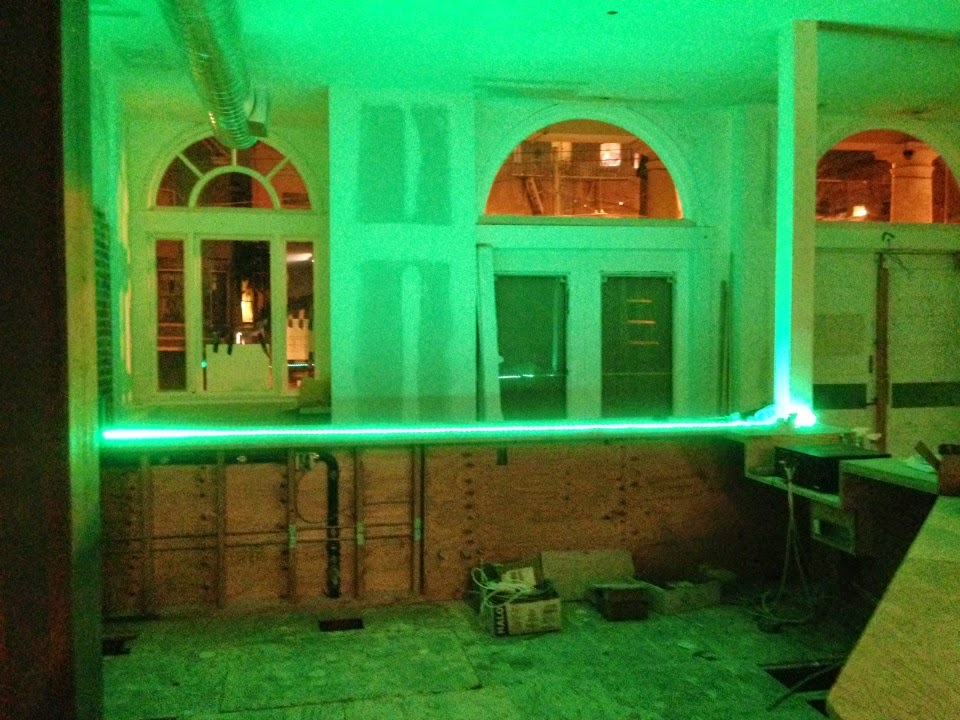 (Photo: Alva Caple)
In the time it’s taken to get the place this far along, Caple tells us that he’s become smitten by the 'hood. “I absolutely love this neighborhood,” he told us. “I am so pleased to be here. I came within a hairline of the Mission, but this neighborhood is truly great. The neighbors are cool, and there’s lots of elbow room ...The only problem so far has been the taggers, and if they are reading this, I want to let them know that I’m just trying to do something good for our city.”
Caple is aiming for a late October opening date and plans to invite friends and local businesses over for a soft opening party, so stay tuned for more updates as Kava Lounge San Francisco nears its grand debut.
San FranciscoDivisaderoAlamo SquareNoPa
About 9 hours ago