Last night's prayer vigil and march to honor the lives of four men killed on Friday night drew a crowd of hundreds to the African American Arts and Culture Complex (AAACC).

The victims of a shooting at Page and Laguna streets, the young men were publicly identified yesterday as Yalani Chinyamurindi, 19; Harith Atchan, 21; Manuel O'Neal, 22; and David Saucier, 20. 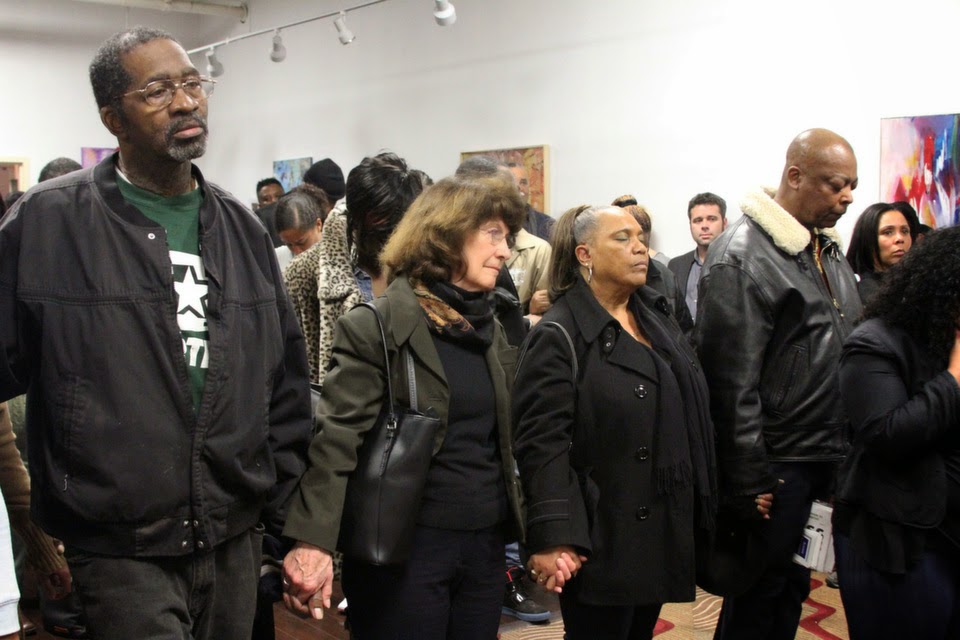 The vigil, emceed by Mattie Scott, gave a platform for members of the community to speak out, including Police Chief Greg Suhr, Supervisor London Breed, AAACC director Mohammed Bilal, and boxer Karim Mayfield, as well as several community activists and mentors, crisis responders and healing agents, clergy, and the families of the victims.

During the vigil, bookended by prayers, community leaders spoke passionately about the tragedy and what needs to be done to prevent this from happening again. 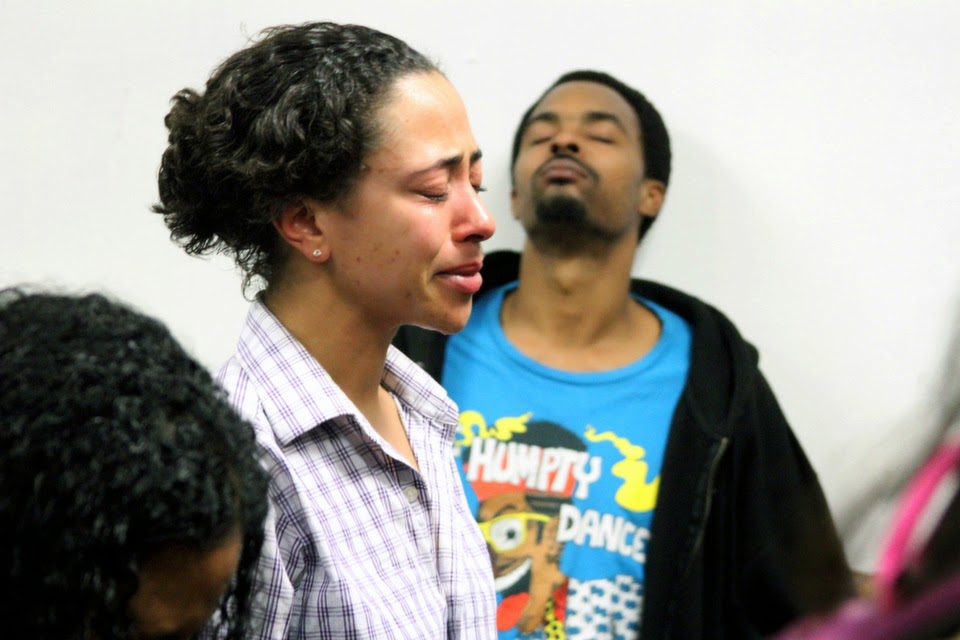 The outpouring of grief was widely felt; In a somber moment, one of the mothers could be heard crying in the hallway. 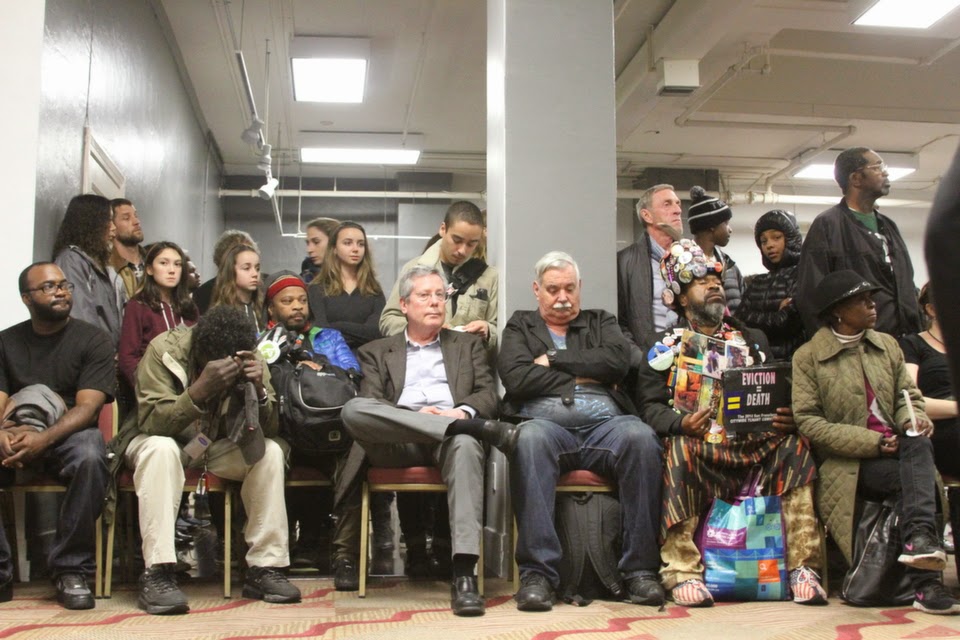 Rico Hamilton of SF Magic Zone’s Transitional Age Youth Program (in the Ella Hutch Hill Community Center) knew all of the victims and was a mentor to two of them, Harith and David. 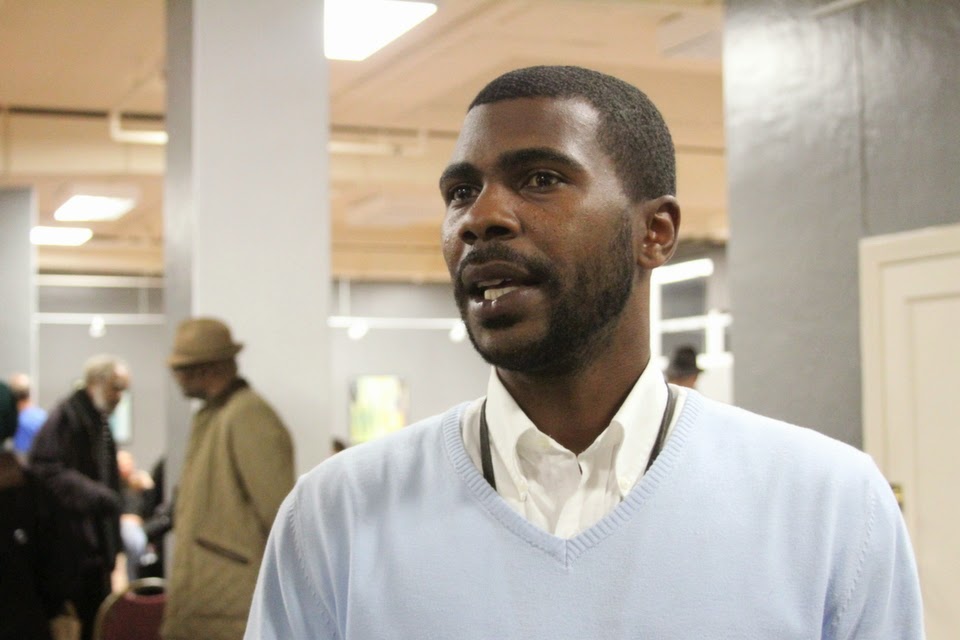 He said that David was seeking to change his life, and that Harith’s little brother is in the music program at AAACC. “It hurts my heart that our community has to go through these tragedies," he said. “We have over 20,000 community programs in San Francisco, but we have all these kids dying.”
“What are we going to do?" he asked. "I see your posts on Instagram and Facebook, but when are you going to turn that into action?”
“I’m from this community," said an emotional London Breed. "I’ve lost friends [to violence] ... this is not about the press. This is family business. Our kids are dying.”
"“We were a community once and we can be a community again,” she said. "Let’s love each other. Let’s support each other. We can do this.” 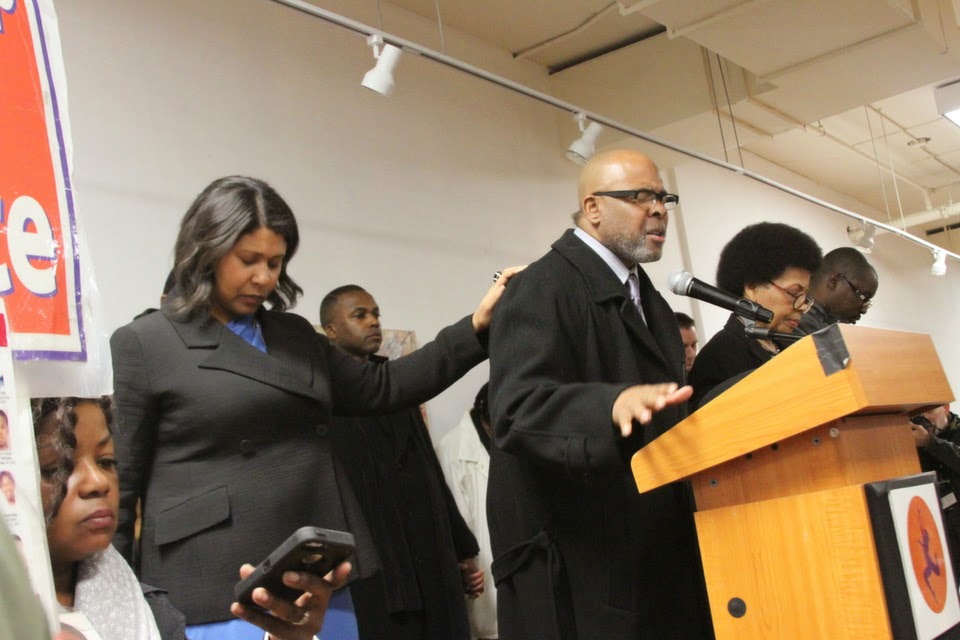 Police Chief Greg Suhr spoke about the gun buyback program and the tipline. “If anyone knows who’s responsible for this, you can call anonymously,” he urged. (If you know anything about this crime, please contact the tipline at 415-575-4444 or text TIP411 with SFPD at the start of the message.)
“Let’s get guns off the streets. If you know about one, call us. No one has to go to jail.” 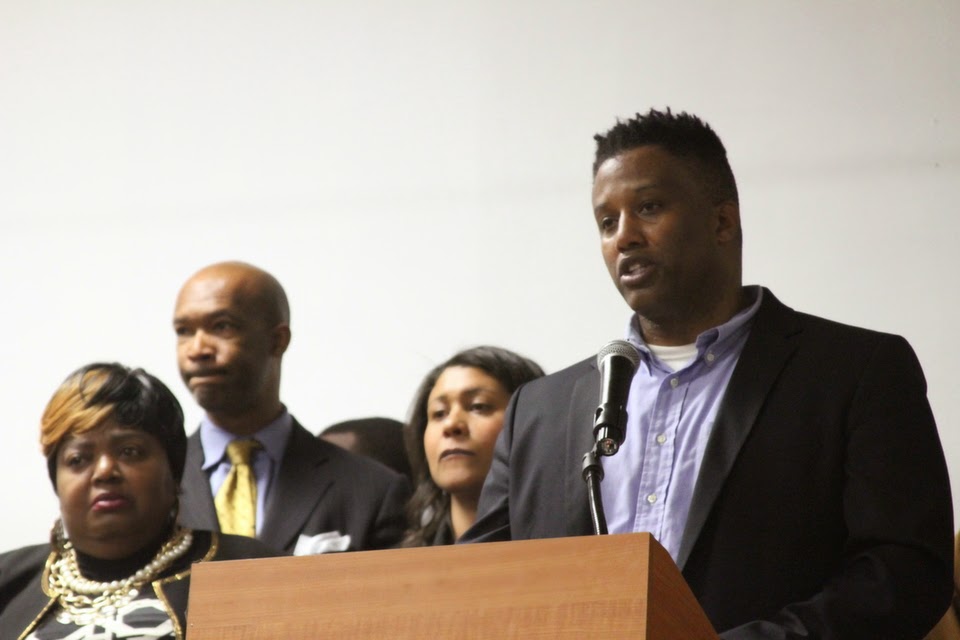 Mohammed Bilal, director of the AAACC and original cast member of “The Real World”, spoke about all the kids who’ve died in the neighborhood.
“As a community we have a responsibility to provide a space for them to feel safe,” he said. “Think about the fact that these are human beings, like every other human being on the planet. Think about your child, your grandchild, your niece. That’s what we just lost.” 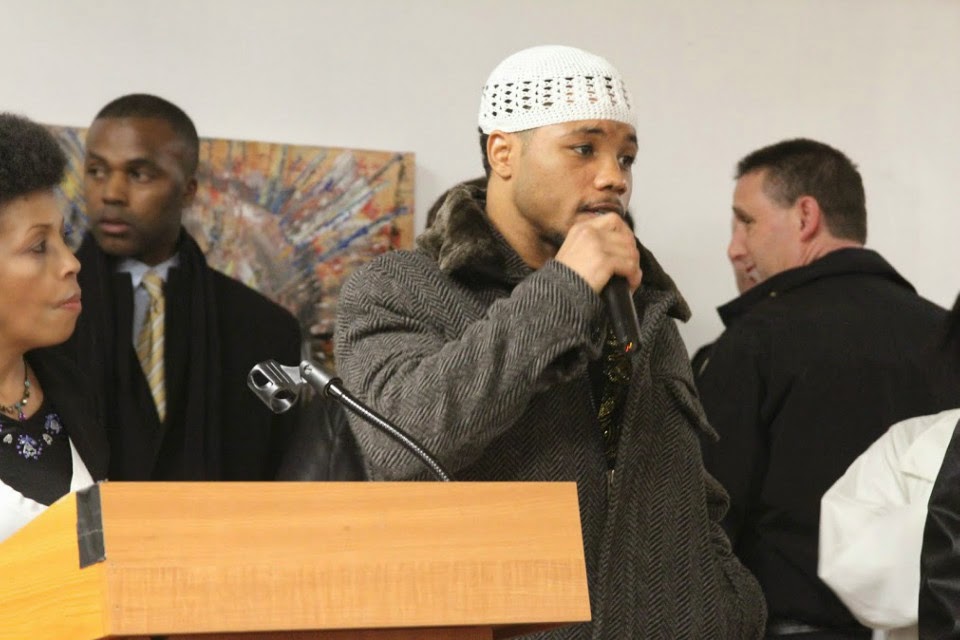 Champion welterweight boxer Karim Mayfield was present, telling the crowd how boxing helped save his life and how he uses it to inspire others.“Boxing changed my life," he said. "It’s something we can do in the short term that keeps the youngsters active.” “I am someone they can see has made it," he said. "I fight for them.”
Karim’s brother LaRan Mayfield has seen his share of death: he’s been to 33 funerals. “Youngsters need to get it together," he said. "You can’t keep killing each other. You haven’t even seen anything or been anywhere.” 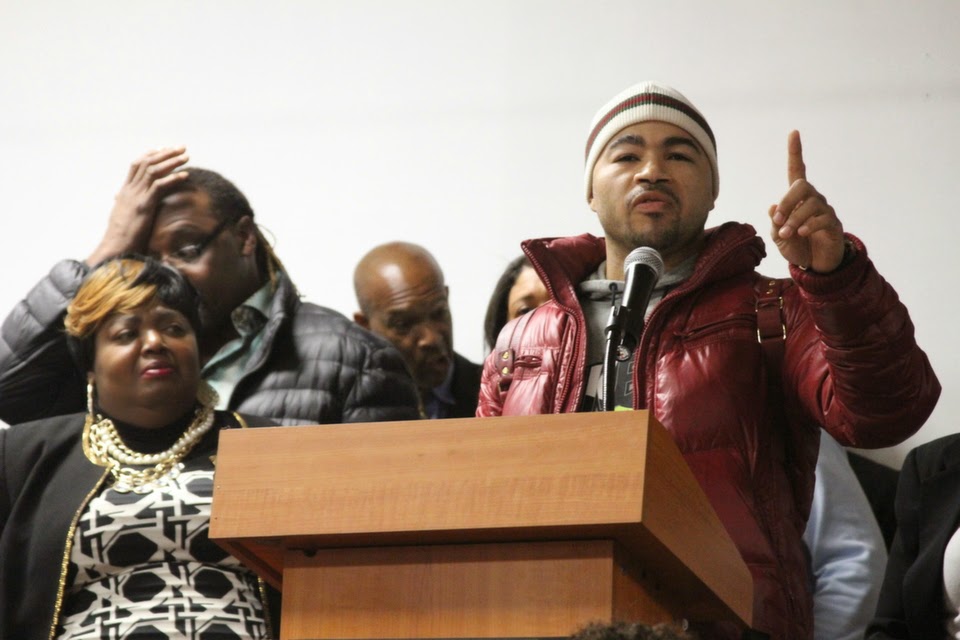 Before the march began, more members of the community spoke, including several mothers who have lost their children to violence spoke, such as Sherry Baltonado, who lost her son Ronnie Goodman to violence in the Mission four months ago.
“This is my third nephew who was murdered in the streets," said Rev. Madrid Johnson aka Mr. Madrid, the uncle of Manuel O'Neal.
“What you’re seeing is a residual of generations before," said Johnson. "Who’s responsible? We are. Because we’re not educating, we’re not nurturing, and we’re not showing love...It has to stop with us ... Ask yourself, what can I do to be a part of the solution instead of a criticizing part?”
The crowd filed down the steps of the AAACC and gathered before beginning the march, which went down Laguna to the corner of Page where the four were murdered, the crowd chanting “No Justice, No Peace” and “All Lives Matter”. 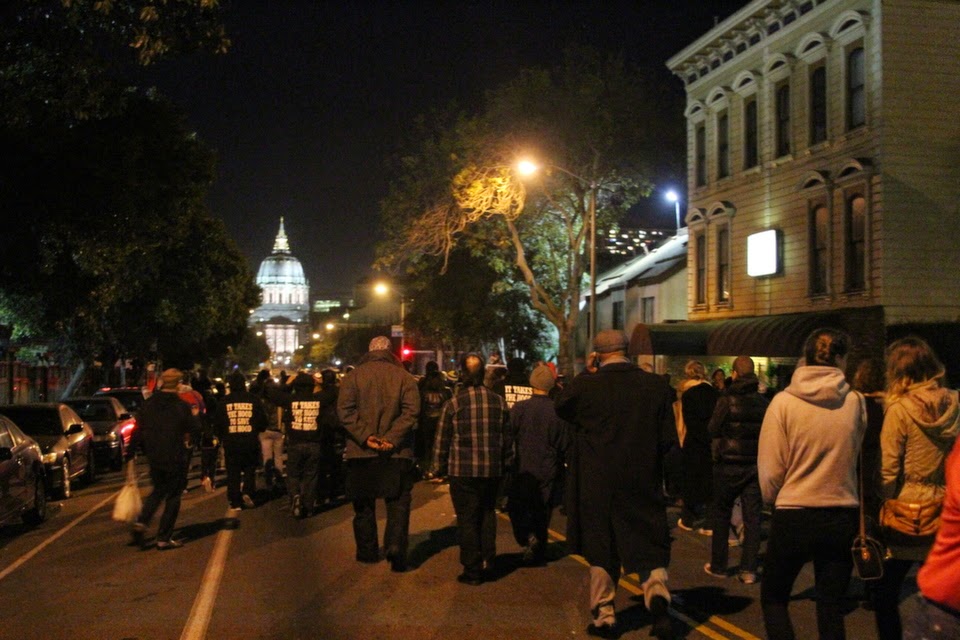 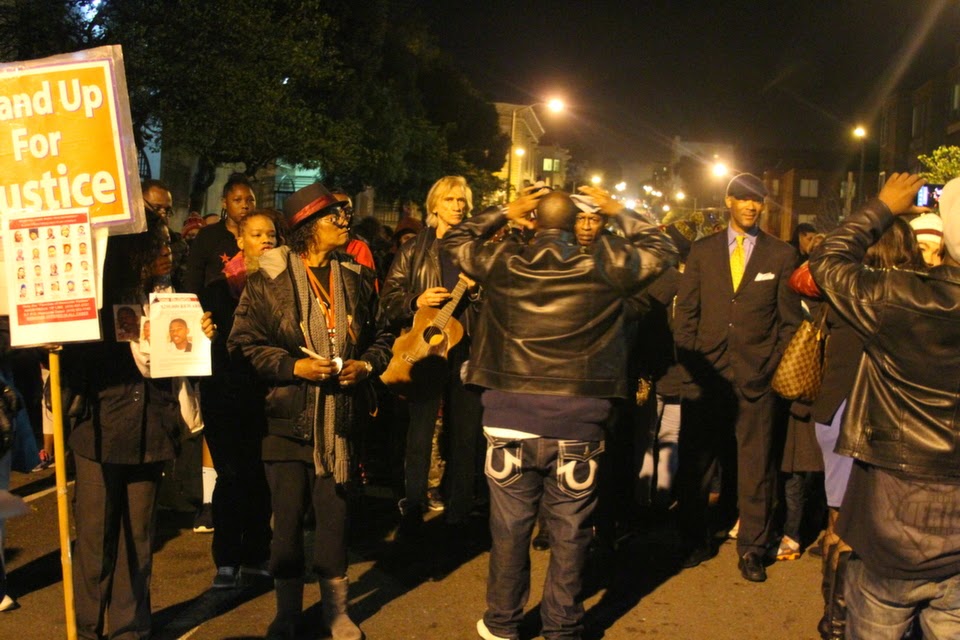 The crowd gathered around a makeshift memorial and heard from the family members of the victims. 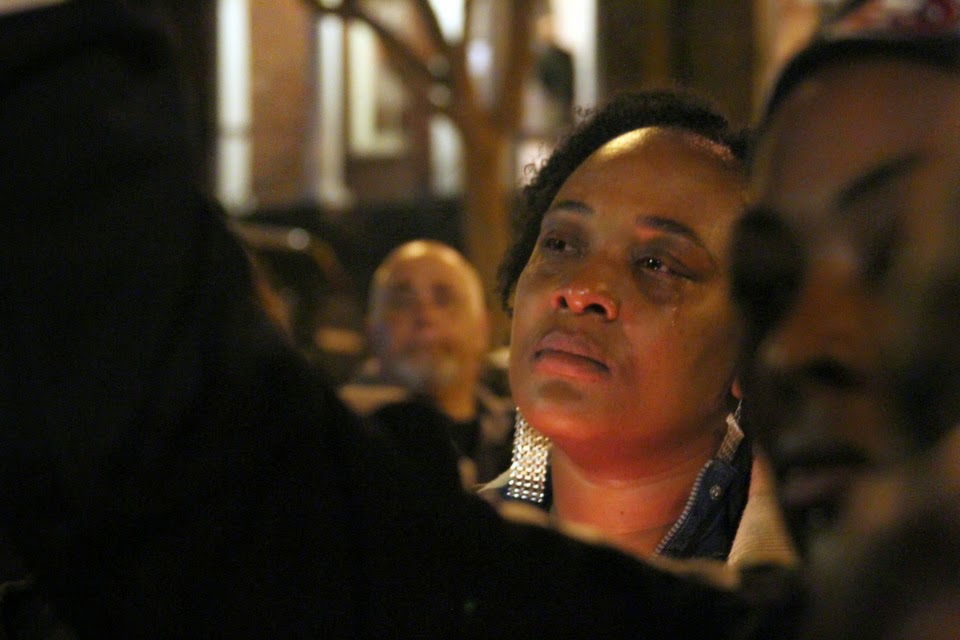 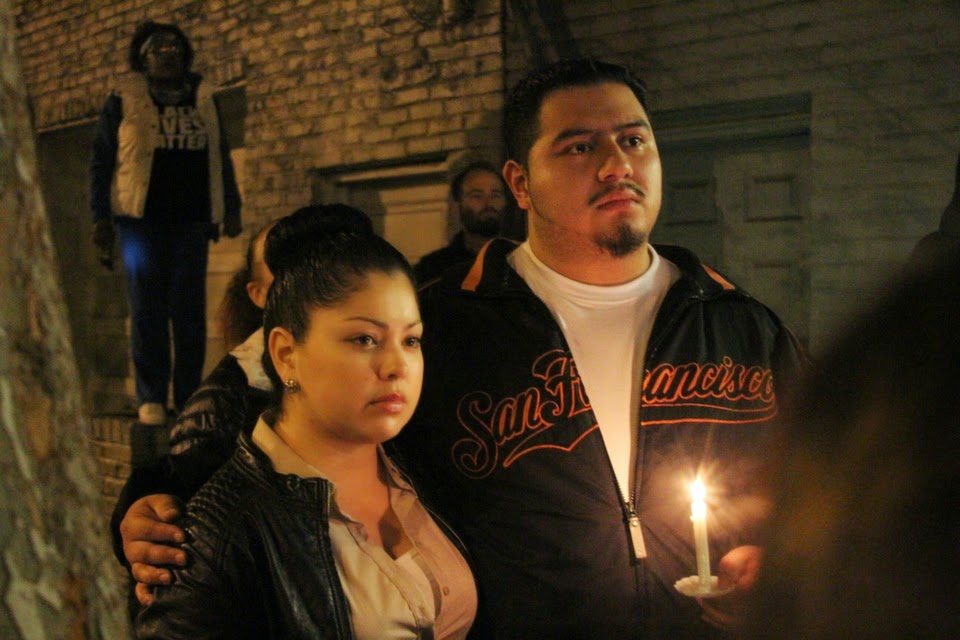 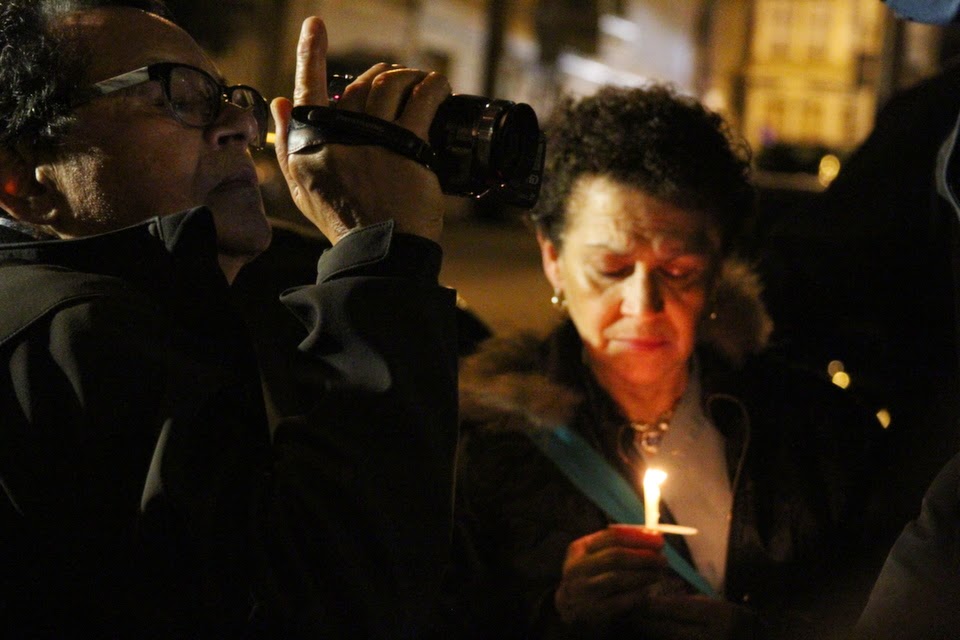 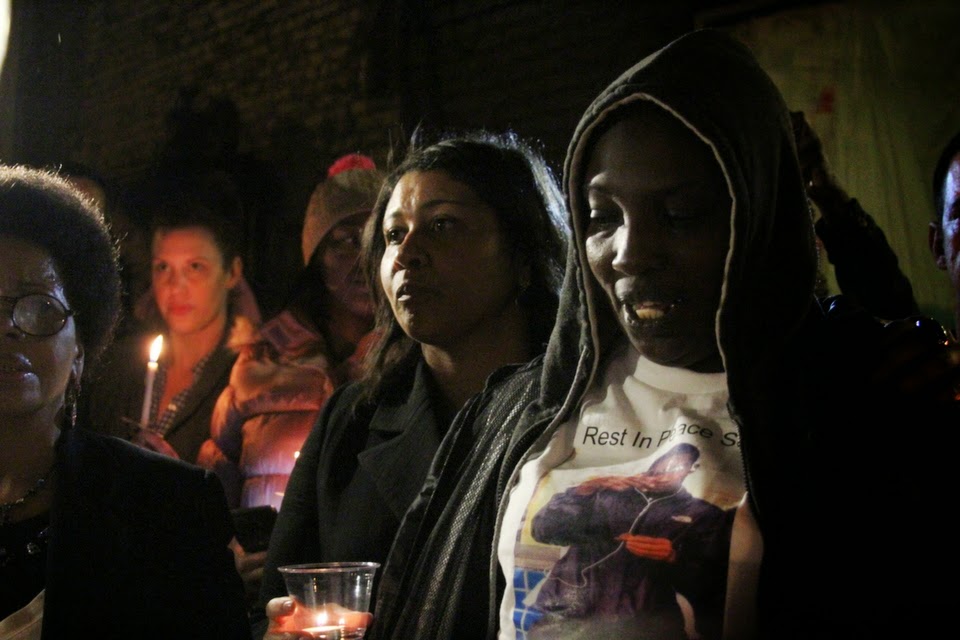 "These young men were valuable young people who were worthy," said Javonne Atchan Gwinn, the aunt of Harith Atchan (below). “Their lives were valuable.” 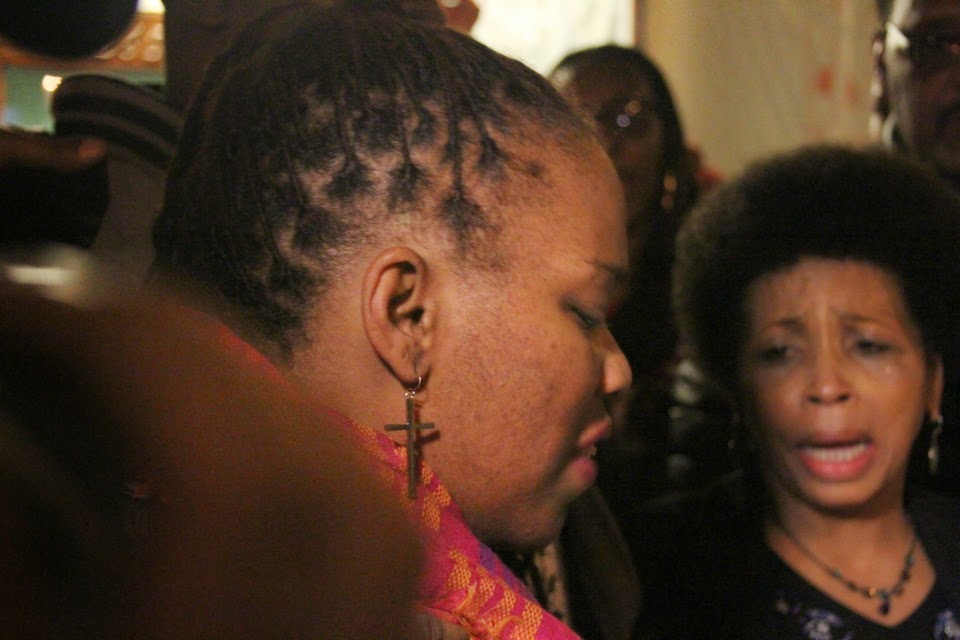 "I want to break down but I can’t," said Yalani’s sister (below). “I need to be strong because so many in this world are weak.” “These young boys don’t hate each other," she said. "They’re scared.”
“People always want to take a stand after death. Take a stand for life. Live life.” 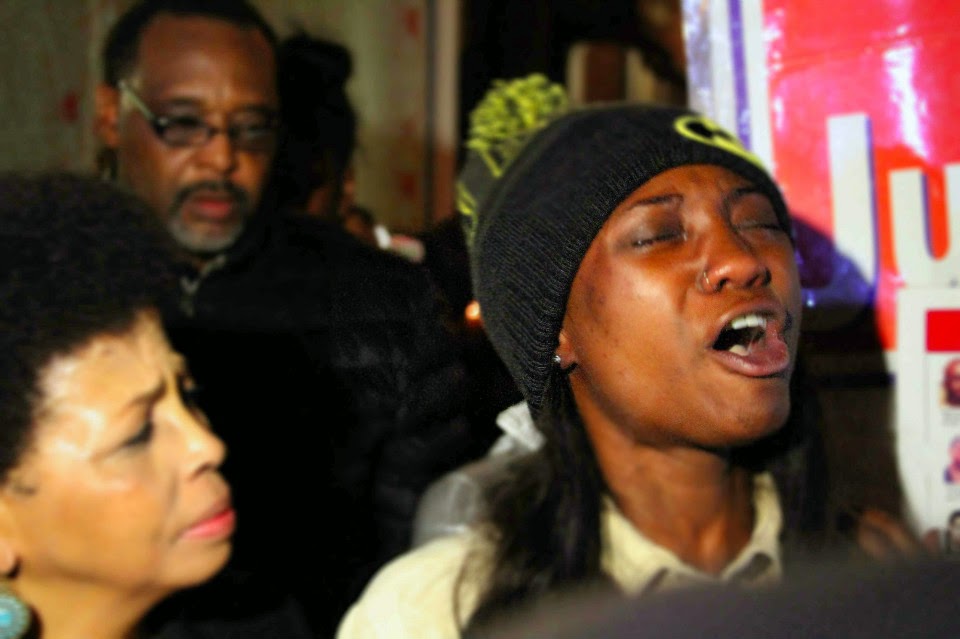 Yalani's mother Miss Chinyamurindi also spoke (below). Yalani was on a break from work at Benihana when he went to go cash his check. According to accounts, he thought he was going to be late getting back so when he spotted his friends, he hitched a fateful ride.
“The reason this case got so much coverage is because it happened in Hayes Valley,” she said. “I thought my son would die in Bayview, Fillmore, Sunnyvale, but many die in Hayes Valley.” 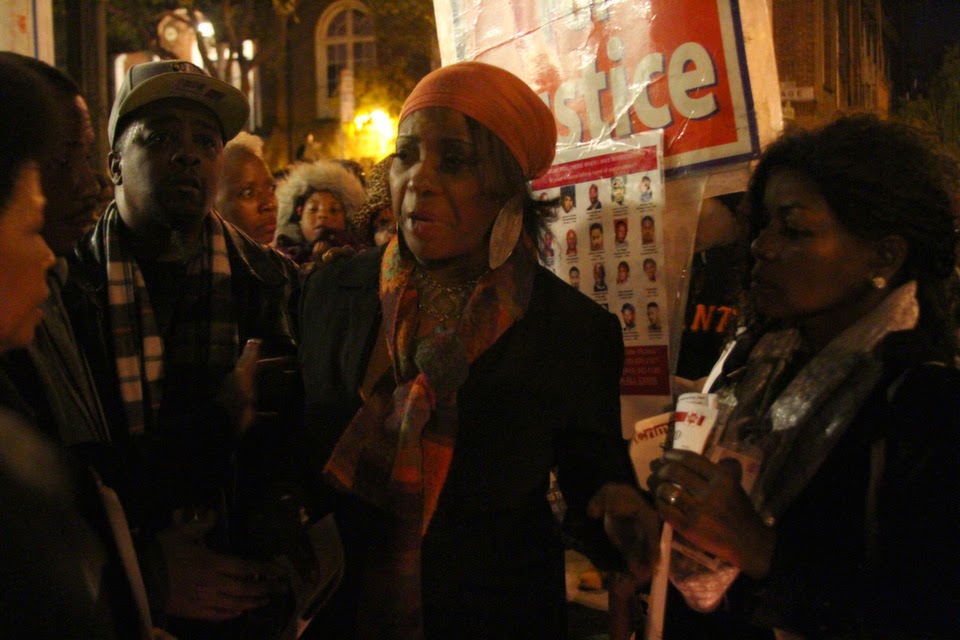 She said her son wanted to move away to a safer place, but could not afford it. “I’m not going to let my son die in vain.” 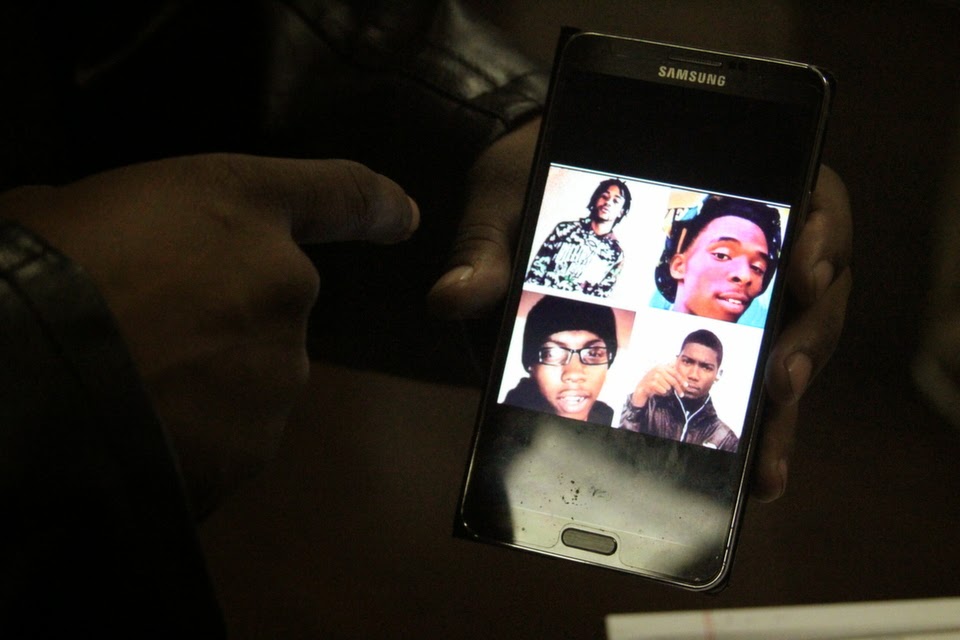 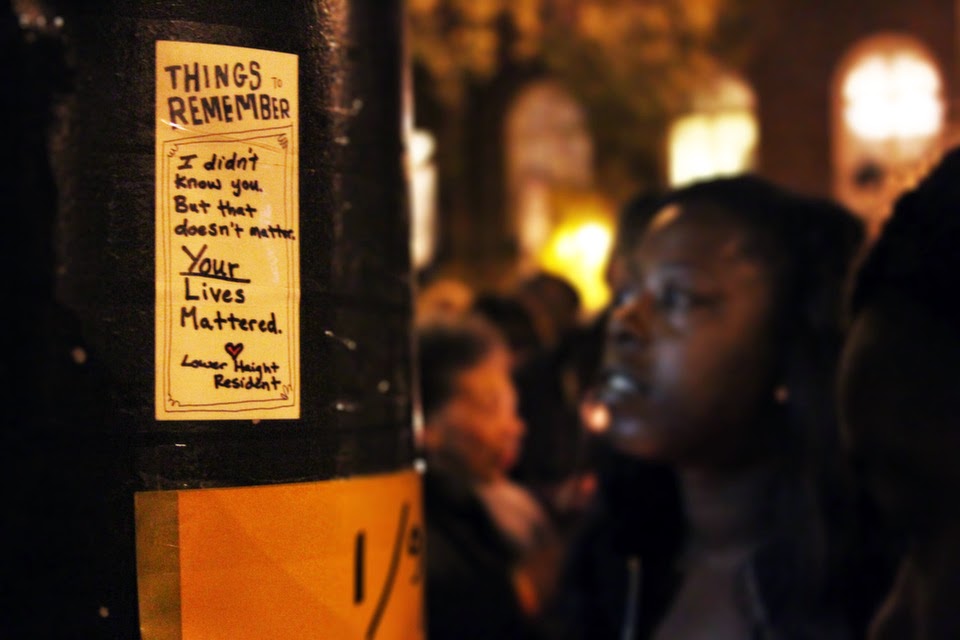