After 45 years in the antiques business—including the last three at the Castro St. Antiques Mall—Randy Markins is closing up shop.

Markins, co-owner of the storefront co-op at 518 Castro St. between 18th and 19th, says recent developments forced his hand in making the decision to close.

After eBay "devastated" much of the retail antiques business, said Markins, the neighborhood construction of last year and increasing rents together killed the business. Shortly after the 2014 Castro Streetscape Improvement Project "kept all the tourists away," he said, his landlord proposed a 40 percent rent increase in a new lease.

Markins says he has loved every minute of his time in the business. "The customers, the dealers ... they've all been absolutely wonderful," he said. "It's just not practical to try sell antiques from a storefront."

Markins moved to a space less than half that size in 2011, but the location near Utah and 16th Street in Potrero Hill "never really clicked," he said. "It was too far from the Design Center and parking was impossible."

So three years ago, when Markins and business partner Michael Matonik saw the 1,000-square-foot space at 538 Castro Street, "we thought the size and location might just work for us." 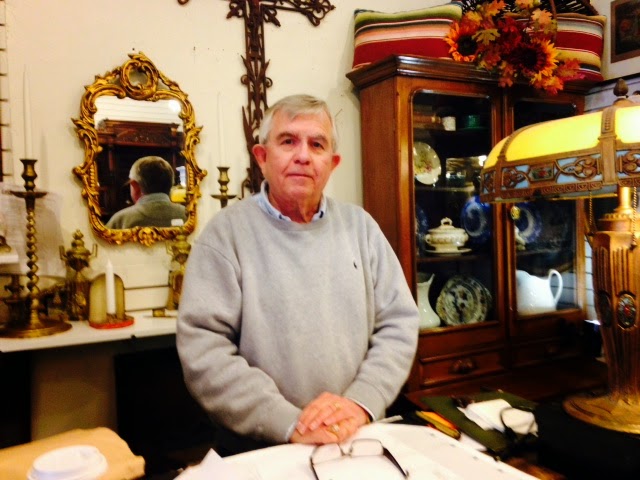 For the first year, business was very good, he said, despite the fact that eBay had already taken a large chunk of the antiques business out of stores and onto the Internet.

But last year, when the city "tore the heck out of Castro Street" during a nine-month construction project, the mall's business quickly dropped by 50 percent and dealers started leaving the co-op. "The tourists would get off the Muni at Castro and Market, look at the mess, and turn right around," he said. Many of the Castro Street businesses "never really recovered."

When the landlord set the new rent at $7,000 a month, Markins said he realized the previous business model "was completely unrealistic" with those operating costs. "I'm not blaming the landlord at all, " Markins said. "He is really very nice. That's what comes along with gentrification."

Markins started in the antiques business by selling "junk" at garage sales in Los Angeles in the 1970s. When he moved to San Francisco, he worked in management at AT&T, where he met his future spouse, Bob. The couple had been together for 43 years in a home they owned in the Mission, until Bob passed away last year.

Now, says Markins, he lives with his two cats, "an old lady and a young girl" in his home. The increasing value of property is tempting him to sell, he says.

For now, Markins is still in business, trying to liquidate his stock and that of the 14 remaining dealers. Everything is on sale, he says. " I had a very good morning today," he said optimistically. "I hope customers will keep coming in. I will try my best to offer people a deal they won't want to refuse."

The store will be open seven days a week, noon-6pm, until February 22nd, with most items now 35-50 percent off.

While Markins doesn't intend to sell antiques anymore ("eBay is way too much trouble"), he does hope to continue helping seniors who are moving in with family or to assisted living to dispose of their belongings through estate sales.

Markins will keep the same phone number (415) 656-3530 and the same email address, [email protected] Stop by to say goodbye before February 22nd, when the shop will officially close its doors.