By Andrew Dudley - Published on May 06, 2015.
San FranciscoLower Haight

You may be familiar with the Church of 8 Wheels, the secretly awesome roller skating rink in the abandoned Sacred Heart Church at Fell and Fillmore.

But what you probably don't know is that a century ago, a massive skating rink located just two blocks south regularly drew huge crowds to the neighborhood. 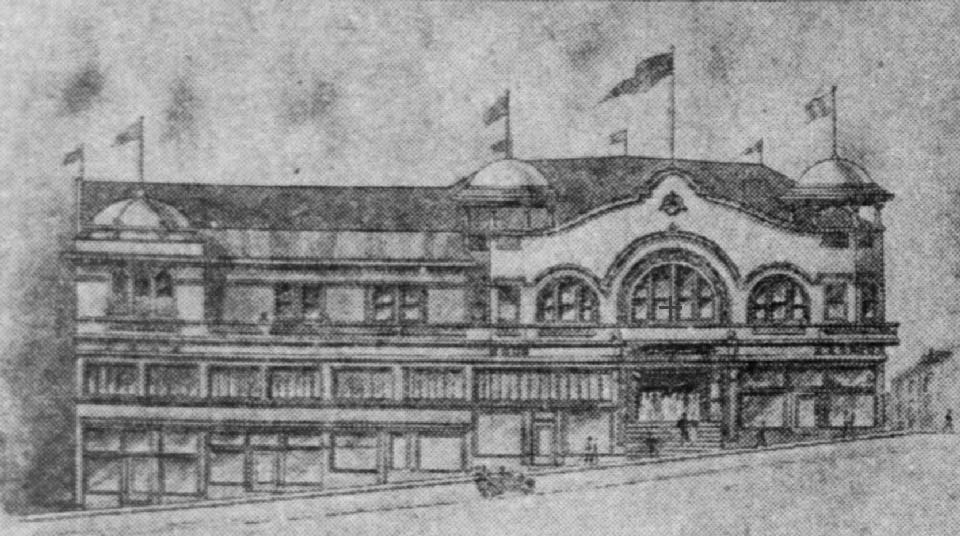 It stretched the entire length of Page Street from Fillmore to Steiner, with a white marble surface, a bandstand that could fit 110 musicians, and three thousand pairs of roller skates on hand. The facility could accommodate more than 8,000 people:

Seat plan of the main floor of the Auditorium Skating Rink. The San Francisco Call, June 17, 1907.

The Auditorium Skating Rink, as it was called, opened in 1906, a year in which roller skating was having something of a moment in San Francisco. As the Chronicle explained in a January 1906 article entitled "Entire Coast Is Skating":

"In San Francisco plans for new rinks appear almost daily, whilst at least one of the fashionable clubs has turned over its ballroom to the skaters among its members.

"Music is necessary to get the most pleasant sensations from skating. Keeping time with the rhythmic waltz strains accentuates the tingle of pleasure which steals over one. March time, for some reason, does not go well with the skating stride, and therefore waltzes are used almost exclusively. Of course, stringed orchestras are impossible, as the blare of brass is necessary to rise above the dull, steady roll of the skates.

"Most rinks reserve places, known as "pens," for beginners, sacred from the prying eyes of the curious public, where the apprentices in the art bump into one another to the heart's content and indulge in mutual apologies and groans. There the old saw about misery and company is especially adaptable.

"Fat people skate to reduce themselves, while thin people take up the sport to put on a avoirdupois. Skating seems to accomplish both these results. A prominent San Francisco society man is said to have taken off thirty pounds since he first put on skates, while a well-known local physician gained more than ten pounds after a month in the rink. Possibly this accounts for the generous sprinkling of very stout and very thin individuals on the different skating floors.

The article notes that polo skating was quickly gaining in popularity, with two teams already being formed. "The very upper crust of society" flocked to roller skating as well, and formed a Monday night club that included about 500 members. "At present skating eclipses all other pastimes," concludes the article.

When the Auditorium Skating Rink opened on November 2nd, 1906, the Chronicle declared that "the new pavilion promises to be one of the best in the city."

"While the place is primarily a rink for skating, still it contains all the features of an up-to-date clubhouse and a music hall combined. Smoking rooms for gentlemen and retiring rooms for ladies are provided. The decorations throughout are superb, and 6000 electric lights, arranged in festoons from the ceiling, afford the best of light ... The sides are paneled in Flemish oak, and the pillars which support the balconies are ornamented with beveled French plate mirrors. Paintings representing landscapes from every country in the world relieve the walls."

Around 1912, the neighbors started complaining. Specifically, they were fed up with the late-night carousing and rowdy behavior that spilled into the streets following certain events at the Auditorium. They petitioned the Police Commission to revoke the building's liquor license entirely. In June 1912, the Commission rejected that petition, but did acknowledge some of the neighbors' complaints. As the Chronicle wrote:

"In making the decision, it was brought out that while the mere presence of a public dance hall is a nuisance in some respects, some set of residents of any given neighborhood in the city would be compelled to suffer, as dance halls of the kind always have existed in all cities."

The Commission renewed the Auditorium's license, but with the restrictions that there could be no dancing after 1am, and three policemen had to be on hand whenever the hall was in use.

A year later, however, the Auditorium would lose its liquor license for good when it was discovered that alcohol had been sold to minors on the premises.

As with so many buildings of that era, the Auditorium Skating Rink was finally brought down not by disgruntled neighbors or economic forces, but by fire. On November 7th, 1915, a blaze of unknown origin consumed the building, which was uninsured. One firefighter was killed battling the fire, and four stores on Fillmore Street were destroyed. A three-story apartment building on Steiner Street and a dry goods store on Haight Street were also affected. The total damage to all the impacted buildings was estimated at $60,000.

After the fire, the rink was not reconstructed, but the site still proved useful. In 1919, for example, a local resident used the location as a ranch, where she raised goats, guinea pigs, dogs, chickens, and at least one Shetland pony: 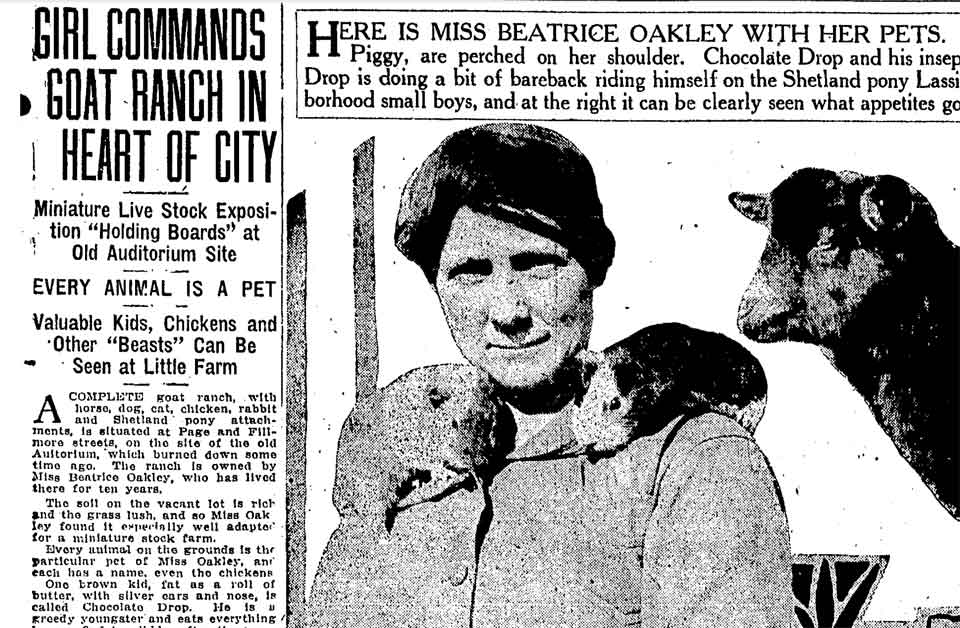 As the Chronicle noted, "the soil on the vacant lot is rich and the grass lush, and so Miss Oakley found it especially well adapted for a miniature stock farm."

Finally, by the early 1920s, the site had been divided into individual lots, with various residential properties springing up on Fillmore, Page, and Steiner. Many of these still stand today, and the boisterous atmosphere of the Auditorium has been replaced with relative calm.

But the next time you're passing Page Street on the 22-Fillmore or stocking up at Abe's Market on the corner, take a moment to think back on the neighborhood skating craze of yesteryear.