[Editor's note: This story appears in the June issue of Central City Extra, our partner newspaper in the Tenderloin. You can read the full version online via PDF here.]

Zendesk, which sells customer service software and was the first Market Street tech company to reach out to the Tenderloin, last month launched a global charity — Zendesk Neighbor Foundation. Its first gift: $100,000 to St. Anthony’s Tenderloin Tech Lab. The 501(c)(3) foundation opens with $1 million in 11 grants for neighborhood renewal in San Francisco and the 10 other cities where Zendesk operates.

As Twitter tax break’s first beneficiary, Zendesk has negotiated annual community benefit agreements with the city administrator’s office since 2011. Zendesk will not claim the gift to St. Anthony’s in fulfillment of its CBA requirements.

“Growing up as a tech company in the mid-Market neighborhood of San Francisco has taught us the meaning and importance of being a good neighbor,” said Zendesk founder and CEO Mikkel Svane. Zendesk has another office in the U.S. in Madison, Wis., and nine worldwide: Australia, England, Denmark, Ireland, Philipines, Brazil, Argentina, Japan and Germany.

Tiffany Apczynski, Zendesk’s corporate social responsibility director and newly named foundation executive director, explained: “The plan is to spread the community aspect that began in San Francisco to the rest of the global offices and instill a companywide culture of giving back.” 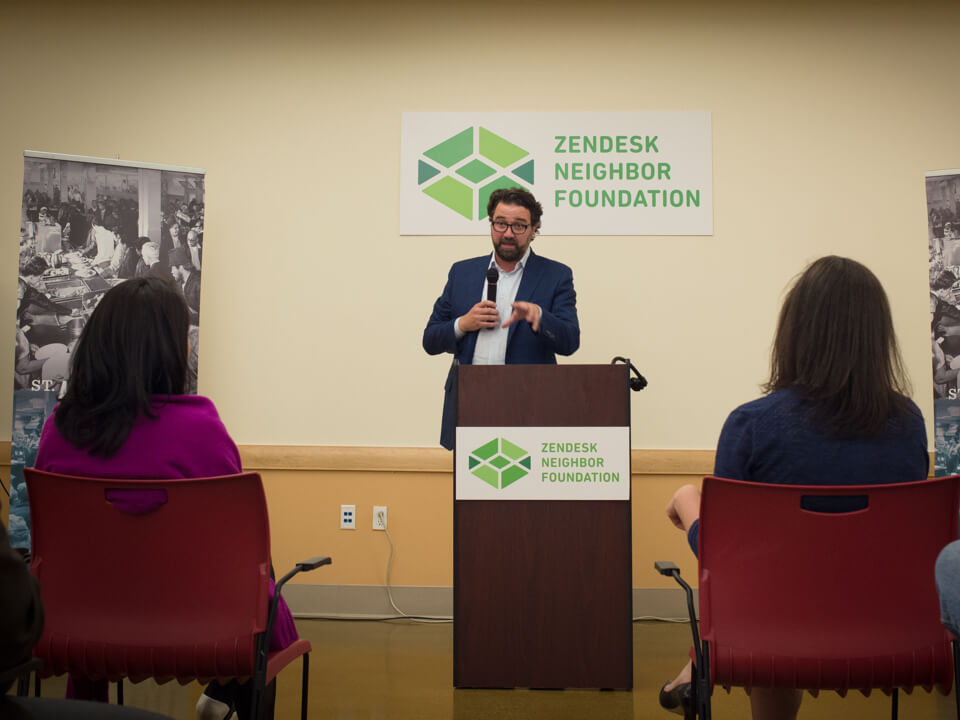 Svane launching the foundation May 13 at the St. Anthony's Community Room. Photo by Taylor Skillin.

For now, Zendesk will fund the foundation by contributing $1 per month for every new employee other companies sign on to subscription plans for customer service platforms. As the company grows so will the foundation. Zendesk trades on the New York Stock Exchange for about $23 a share, and the company has drawn nearly $2 billion from the sale of stock.

“St. Anthony’s is thrilled,” said Karl Robillard, senior manager of St. Anthony Foundation. The $100,000 will support operations of the Tenderloin Tech Lab, the 8-year-old progeny of St. Anthony’s Employment Program/ Learning Center and S.F. Network Ministries’ Computer Training Center that pooled their expertise and equipment to help breach the digital divide in the TL, at a time when that gap was a deep, deep chasm.

In 2007, the Tech Lab quarters were cramped, and the computers were refurbished castoffs donated by Goodwill. Technology was ascending, but the boom of technology and its presence in the everyday life of the Tenderloin had not yet happened. As The Extra reported, St. Anthony’s announced the lofty goal of serving 50 users a day in the new lab with a vow to “make technology less scary to neighborhood residents.”

On a morning last month the Tenderloin Technology Lab on the third floor of St. Anthony’s 150 Golden Gate Ave. building was in full use. In a series of well-lighted rooms 50 or so people sat quietly working at new, state-of-the-art, touchscreen computers.

Julia Cowan, the lab’s coordinator of instruction, explained that some guests, as St. Anthony’s calls those it serves, were there to catch up on the Internet news and entertainment, or to read their emails. Others, in a small room with six computers, were working with individual instructors to hone their computer skills, learning to navigate Excel programs or PowerPoint platforms. The third floor had the calm, studied atmosphere of a library in use. 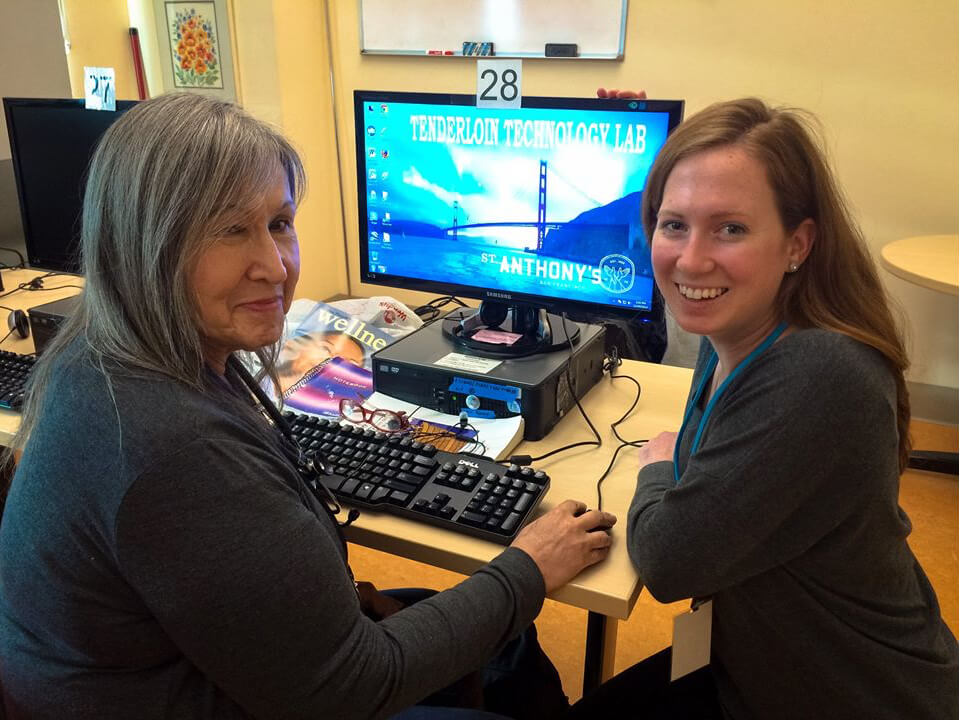 At the St. Anthony Foundation. Photo by Taylor Skillin/Facebook.

Classes of six are conducted in the Computer Learning Lab, where the new touchscreens flank the walls and a 6-foot monitor screen draws the eye.

St. Anthony’s says about half of the lab users are homeless, living on the street or in temporary shelters. “We’ve conducted focus groups and most of our guests say they value the safety and calm of the lab. They can be productive and not have to hold in place the defenses they might have to use on the street,” Omid Khazaie, assistant manager of the lab, said.

Anyone can use the lab. The basic instruction program meets four times a week in hourly sessions for three weeks. People who feel they’ve mastered the basics can enroll in the intermediate training. If not ready, they are free to re-enroll in a second go-round of elementary training. There’s no pressure to move up and out. If guests are happy with their level of computer competence, they don’t enroll in classes. They can use the computers as they please, reserving an hour of use, or longer, if no one else is waiting for a seat to open.

St. Anthony’s doesn’t view the lab as a standalone service to the community, but as part of the overall programs it offers. “The ability to use technology is vital to people seeking job training, resume building and, in many cases, re-entry to society. That’s why the touchscreens are helpful. It’s streamlined and it’s the new way people will use technology,” said Jessie Brierley, a communications associate in St. Anthony’s public relations department.

“The number of smartphones in the neighborhood is growing and people are learning more and more about services. The latest technology — swiping a touchscreen — is the key. You can access multiple services in a new way,” Brierley said.

San FranciscoTenderloin
About 15 hours ago