The work of artists who are both world-famous and locally notorious can be found on Polk Street, which has long been home to a thriving arts community with cutting-edge sensibilities. Today, the visual tableau of the neighborhood continues to evolve, and may represent one of the densest clusters of pieces by high-profile artists in the city. 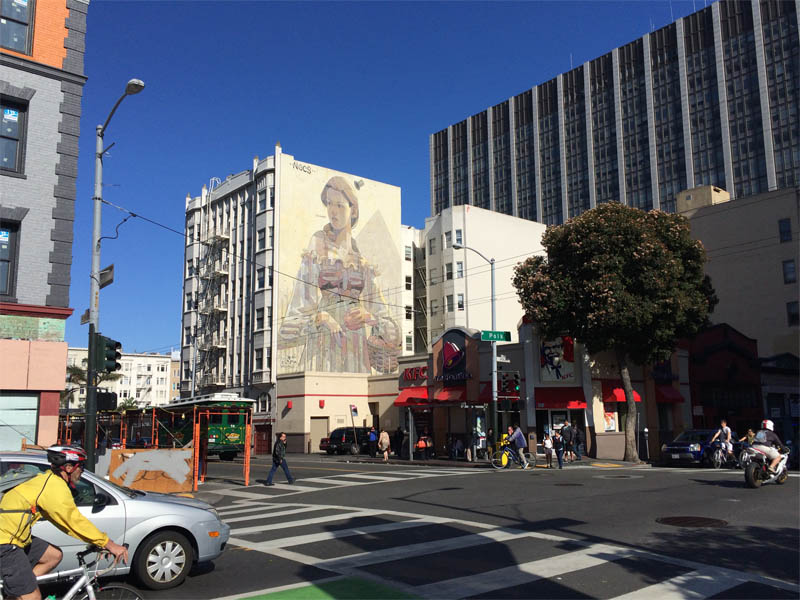 The largest and most prominent piece is Rotten Apples (sometimes called Basket of Apples) by Aryz, a fine artist from Barcelona with a portfolio full of massive walls around the world. The 70-foot portrait of a peaceful bohemian farm girl has been gazing down on the busy intersection of Polk and Eddy since 2013. Recently, a tagger hit the upper left corner of the mural using the tag "NOCS." 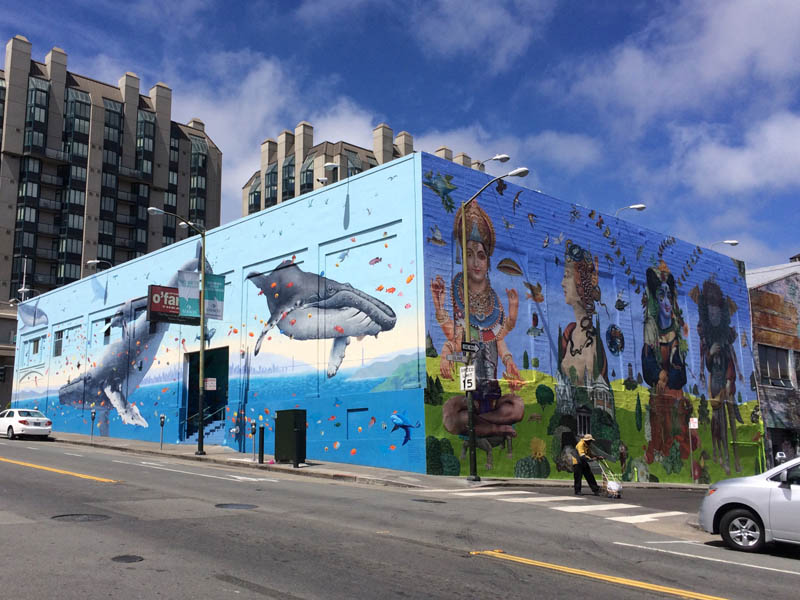 The notorious Mitchell Brothers O'Farrell Theater has made its ample wall space available to artists for decades. Original owners Jim and Artie Mitchell were as supportive of the visual arts as they were of the performing arts, and they commissioned a series of murals in the years before 1991, when Jim fatally shot Artie.

The business, now technically known only as the O'Farrell Theater, continues to sponsor new murals. The whales on the Polk side of the building were painted by Academy of Art University students in 2011, and the psychedelic wheatpaste mural on the alley side was installed earlier this year by John Vochatzer.

Not all of Polk's street art scene can be found above the horizon. The neighborhood is rich with street-level tags, stickers and stencils as well. 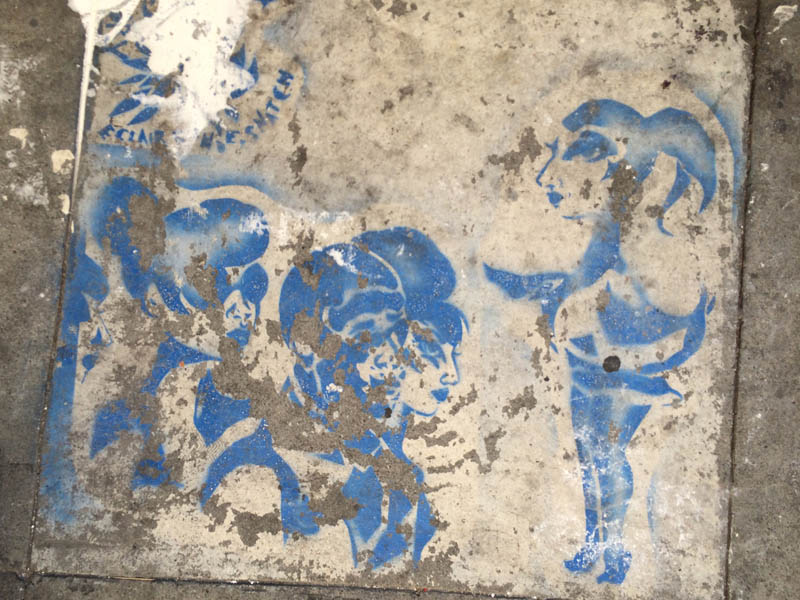 An early piece by stencil artist Eclair Bandersnatch can be found on the 1000 block, though it has been partially worn away by passing feet.

If you happen to peer down Austin Alley, you'll see several large pieces tucked about halfway down the block. 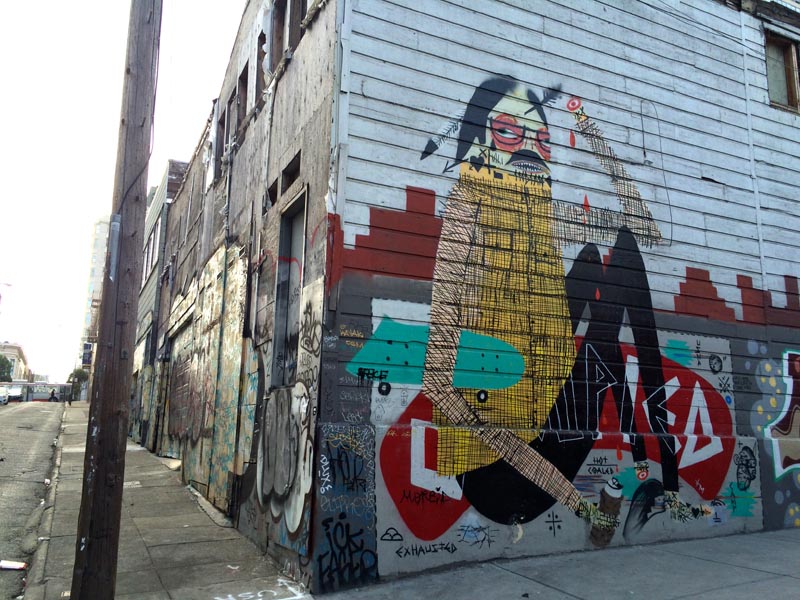 American Indian Occupation was painted by Jaque Fragua and Spencer Keeton Cunningham in 2011, as a response to the Occupy movement from a Native American perspective. 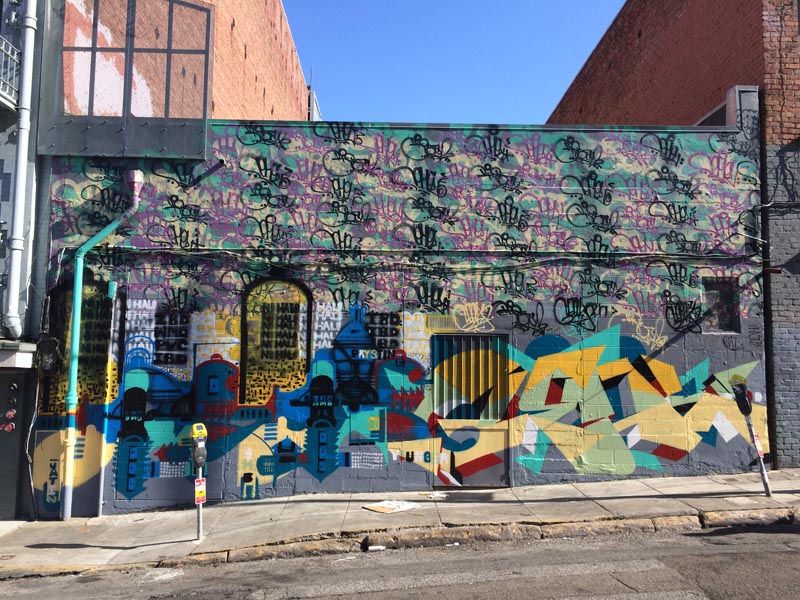 Across the alley is this wall, bearing pieces by Geso (top) and Gleak (bottom). Both pieces represent a form of graffiti art known as "writing," which typically features a stylized signature that's more complex and artful than tagging. Geso's layered, repeating patchwork of signatures can be seen on buildings throughout the Bay Area. 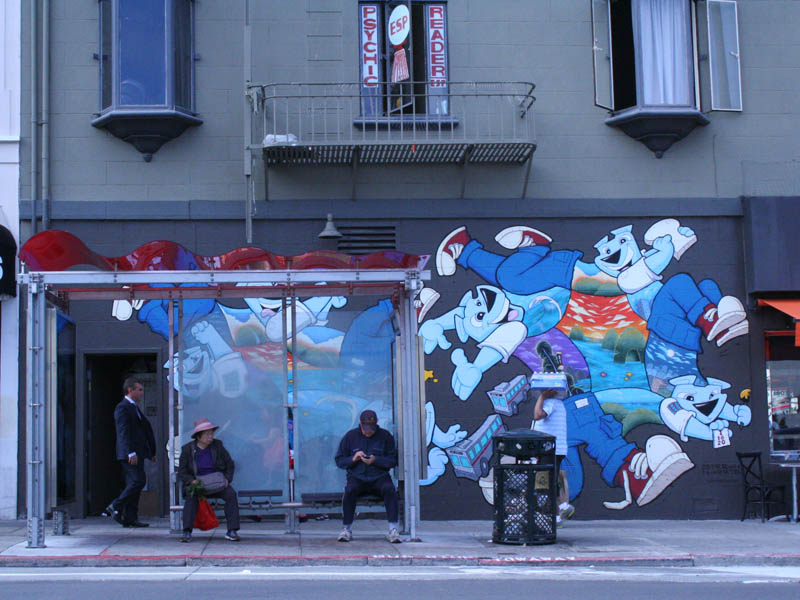 These whimsical, tumbling bears are the hallmarks of Sirron Norris, an accomplished multimedia artist who's been prolific in the San Francisco arts scene since arriving from Pittsburgh in 1997. Norris has created numerous murals across the Bay Area, and was the head artist on Fox's animated sitcom Bob's Burgers. This untitled piece at Sacramento and Polk was completed in 2014. 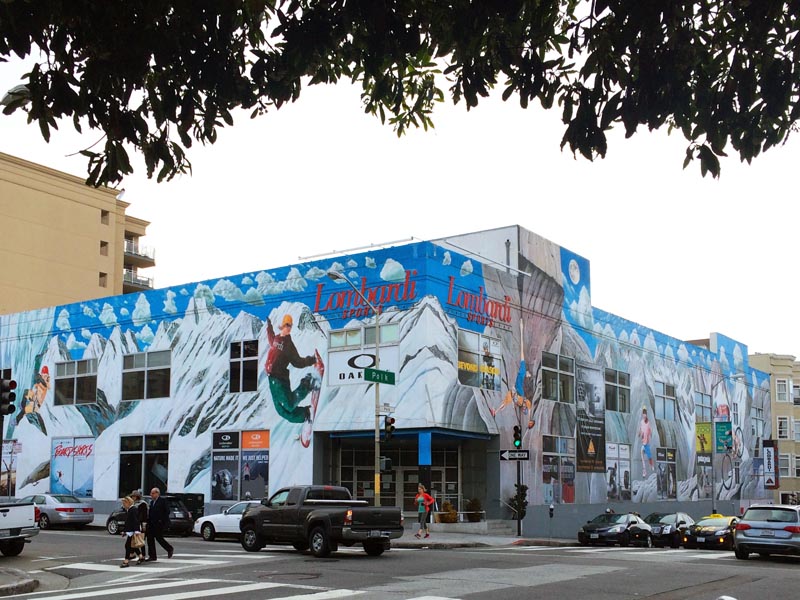 Moving further north along Polk, the presence of both murals and graffiti steadily disappear. At the corner of Polk and Pacific Jackson is the last, most unlikely, and most massive canvas space: the now-closed Lombardi Sports. While it's unlikely that the new operators of the space—whoever they might be—will have need for a mural featuring extreme outdoor sports, the big, flat, canvas-like walls could do far better than a coat of beige paint.