Beginning tomorrow, August 11th, the commuters, residents and workers of Market Street will notice some big changes to one of the city's busiest corridors.

At 7am, the Safer Market Street Plan, which will institute turn restrictions for private cars (including Uber and Lyft cars) on Market between Third and Eighth streets, will go into effect. It will also introduce transit-only lanes to the corridor. The plan has the potential to reduce traffic on Market Street between 30 and 50 percent, according to the SFMTA.

The Safer Market Street Plan was proposed as part of the city's Vision Zero campaign, which aims to end traffic deaths by 2024. In a recent two-year period, 160 people (60 percent of them pedestrians) were injured in traffic collisions along Market between Fifth and Eighth streets, according to the SFMTA. By removing private cars from Market, the SFMTA hopes to relieve traffic, increase visibility and reduce bottlenecking at busy crosswalks.

"This is the most significant step we've taken as part of Vision Zero," said Ed Reiskin, the Director of Transportation for the SFMTA, at a press conference held this morning. District 6 Supervisor Jane Kim concurred. "If we want to hit zero traffic fatalities over the next nine years, it's going to take engineering, planning, and enforcement," she told the crowd.

At the conference, Nicole Ferrara of WalkSF said the new plan would be a huge boon to safety, as 100 percent of fatalities and 80 percent of injuries on Market are related to automobiles.

The plan was approved at an SFMTA hearing on June 16th, despite protests and a petition from Uber. At the hearing, Kim, the San Francisco Bicycle Coalition, and many taxi drivers all vocally supported the plan.

The project has been pushed into place quickly; just two weeks after the hearing, construction teams were already at work painting new transit-only lanes on Market between Third and Eighth. Last week, new signs at each intersection went up.

To help enforce the new laws, Parking Control Officers (PCOs) will be stationed at every intersection along Market between Third and Eighth streets, guiding traffic according to the new restrictions. PCOs will continue directing traffic on weekdays for the next two weeks, from 7am-7pm. Beginning Monday, August 24th, drivers will be left to follow the signs on their own.

Here's a sample rendering from the SFMTA of northbound signs at the intersection of 3rd and Market: 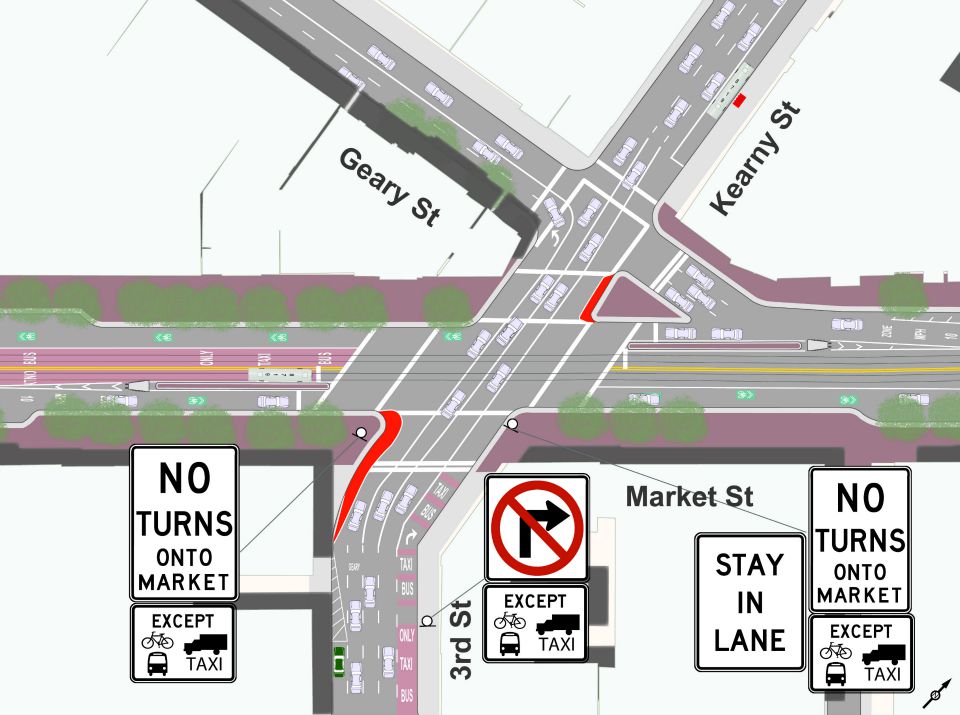 As these turn restrictions begin, we're curious to see if traffic really is reduced on Market Street, and how the system works for drivers. Let us know your thoughts in the comments.

San FranciscoMid-MarketTenderloinSoMa
About 3 hours ago