The Eastern Neighborhoods Citizens Advisory Committee has unanimously approved a $1.5 million in-kind agreement for Eagle Plaza, which seeks to turn a portion of 12th Street between Harrison and Bernice streets into a public gathering space that showcases the LGBTQ and leather heritage of western SoMa.

Eagle Plaza is a component of Build Inc.'s development plans for 1532 Harrison St., which seeks to construct 136 apartments and ground-floor retail space on the existing surface parking lot. With the Planning Commission's final approval, 93 percent of the Eastern Neighborhood Impact Fee generated from this project would go toward funding the plaza. The remaining $520,000 to develop the plaza will be contributed by Build Inc., grants and community fundraisers held during the planning process. 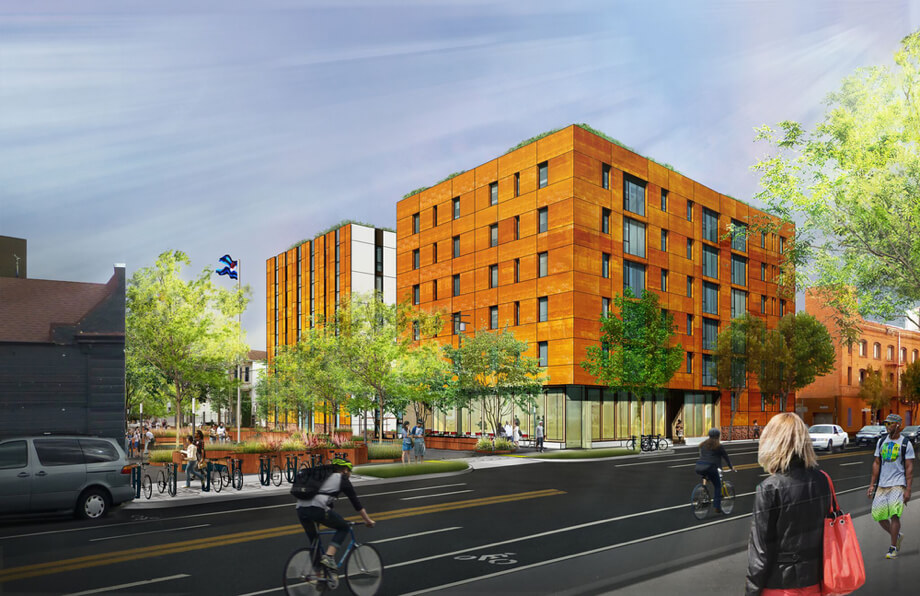 Based on two years of planning with the surrounding community, current plans for the plaza include a shared way for pedestrians, bicyclists and cars, as well as the ability to reconfigure furnishings to close the street to vehicles during events — and possibly permanently, if the community desires.

The Leather Pride Flag will reside in the center of plaza, and Lex Montiel, co-owner of The Eagle, said the space will serve as a hub for events hosted by The Eagle and local nonprofits supporting the LGBTQ and leather community.

During his brief presentation last night, Build Inc. Principal Michael Yarne said that in current renderings, much of the plaza is paved to accommodate activities like outdoor film nights and tether ball. Based on feedback from the city, however, they're working on new designs to incorporate even more green space.

Yarne also noted that the plaza accomplishes the city's goals of calming traffic and greening 12th Street, and using the urban landscape to celebrate the city's history.

While ENCAC members were impressed by the plans, many were concerned with how maintenance and programming would be managed and funded. While the plaza will become a permanent open space owned indefinitely by the city through the Pavement to Parks program, Yarne explained that Build Inc. and Panoramic Interests (which plans to develop the nearby lot at 333 12th St.) have agreed that the owners of both properties will pay into a Community Facilities District, which will cover the cost of maintenance for at least 50 years. The nonprofit Friends of Eagle Plaza has already been formed to help program the space.

Another major concern for committee members was budget constraints. Of its $42.5 million budget for recreation and open-space through 2021, ENCAC had $4.9 million of unappropriated funds that could be granted to open-space projects.

Prior to the Eagle Plaza presentation, the director of Rec and Parks' Capital & Planning Division, Dawn Kamalanathan, presented a progress report on other green spaces the agency is improving with funds ENCAC granted. During her presentation, Kamalanathan informed the committee that Rec & Parks is negotiating to acquire lots at 161 11th St. and 1133 Mission St. for future 6,000- to 20,000-square-foot green spaces. However, the agency does not have funds to redevelop the spaces, she said.

While the committee worried that their $4.9 million would quickly disappear, to the detriment of those potential parks and future open space projects, they ultimately voted to approve the full $1.5 million based on the developer's long-term maintenance plan, 2017 delivery date, positive feedback from community members in attendance and the existence of a separate $8.8 million budget the committee has earmarked for new SoMa parks.

With the development of Eagle Plaza now fully funded, Build Inc. will present it, along with the full 1532 Harrison St. development plan, to the Planning Commission for final approval in early October.